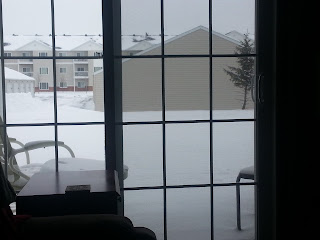 Leah and Ian made it over for their visit on Wednesday because it had let up a lot.  Leah put the charger on the Paseo and they came in for a nice long visit.  (I even have videos today!)
****
Ian usually gets into Karma's "toy box" every time he comes over. 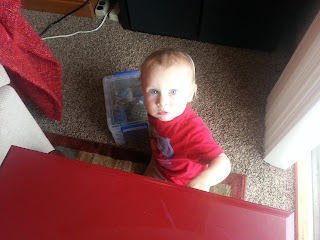 I think he mostly likes to take the top of the plastic box off and on--LOL! 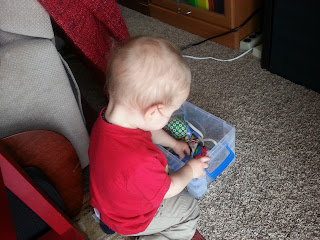 I don't know how to move videos once I have them already on the post so the Ian videos are at the end.
****
We got the Paseo running!  I had been out in the garage moving things on Tuesday, Leah finished moving the last of it, and once I could move the Paseo over there is now room for Dagan and Leah's Galant--tada!  So, I don't have to worry about the Paseo keeping a charge or driving it on the snow and ice.  Happy, happy me!!!  They'll drop the Galant off in the garage before they leave for Henning on Tuesday (Dagan's dad's).  What a relief!  :)
****
Woke up Thursday morning--opened the blinds--and look what I found! 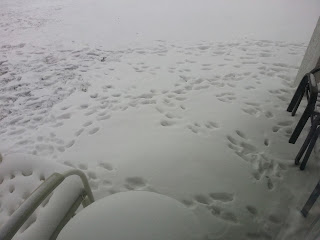 There had been quite the jackrabbit party during the night--LOL! 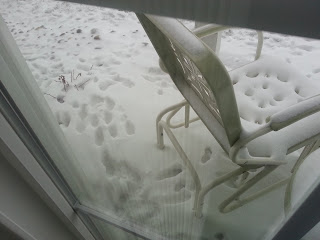 This isn't the clearest picture but the wind had blown a patch of grass near my patio half clear so that grass showed through the snow. 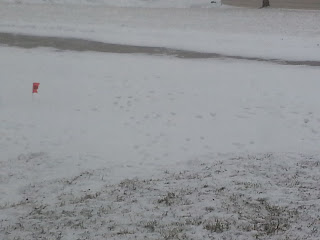 Quite the overnight feast for the jackrabbits, I guess. 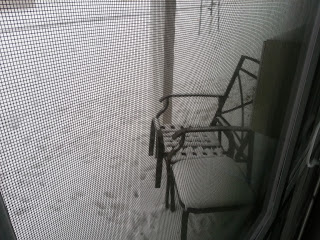 I would have loved to see them cavorting about. 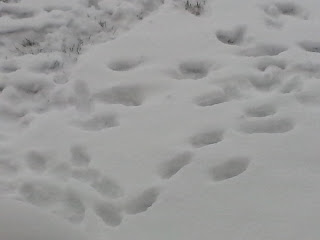 It must have been quite a sight! 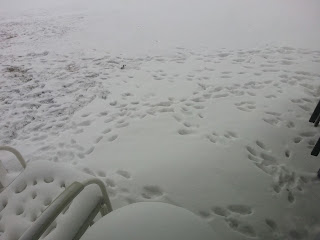 All this evidence of bunny dancing... 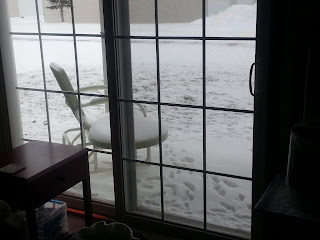 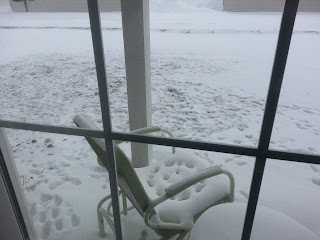 ...until the snow and wind covered up most of the tracks. 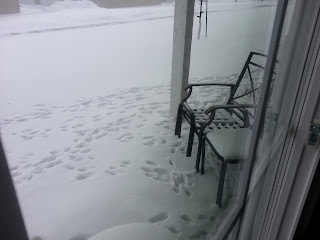 Caught Miss Karma all fascinated by the noise in the hallway. 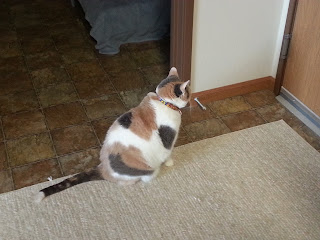 I think it was the blind lady in the wheelchair who lives across the hall.  Maybe Karma thought Shirley might tap lightly on our door again to ask me if I could find something she dropped in the hallway.  (I've helped her a couple of times and told her to come knock any time if she drops anything.)
****
And then this cloudy, dark morning... 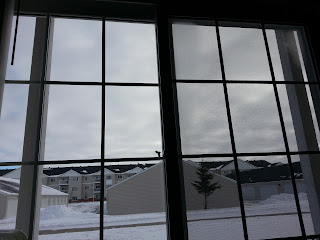 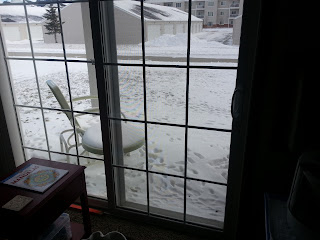 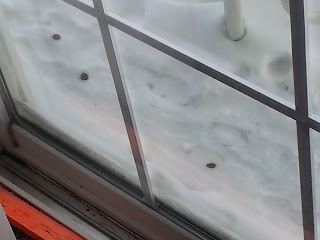 Large ones--LOL!  So I know for sure these are the huge jackrabbits I see on occasion--who are almost pure white now. 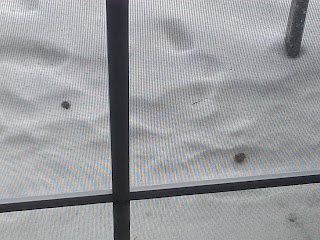 Guess we've got a regular Jackrabbit Nightclub thing going on out there while I'm sleeping. 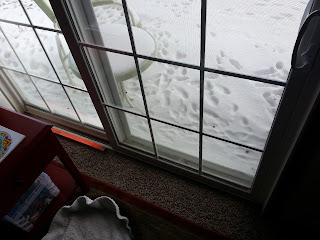 I wonder if Karma has clue? 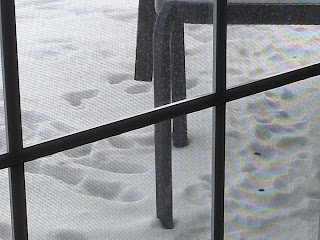 Does she peek out through the blinds to observe the shenanigans? 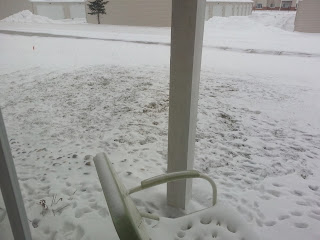 I rather doubt it.  Because I think they'd flee if they saw Karma in the patio door.  Doesn't look there was any fleeing involved.  Yup!  Jackrabbit Nightclub.
****
Now--on to the videos.  :)
****
Got a super short one Leah sent me of Ian trying to figure out how to hang ornaments on the tree.
I took one of Ian on Wednesday.
Leah took one, too.  (We had no idea she'd be recording the on-off game--but Leah mentioned the light and Ian ran around my chair--LOL!)
Well, just wanted to pop in and say hi.  Doing laundry.  It's 10 degrees out there!  (That's -12C.)  Dagan and Leah have seen the new Star Wars movie twice by now (last night and this morning), the sun has come out, it's a pretty day, and the Jackrabbit Nightclub is open for business tonight.  ;)
****
Oh, Dagan's stopping by later after a doctor appointment to pick up the last DVD of Better Call Saul from Netflix.  (They only have streaming anymore, but I knew they'd like seeing this now!)  Were any of you Breaking Bad fans?  Have you seen this prequel series?  I'm really enjoying it.
****
Anyways, Dagan will give me a thumbs up or thumbs down on Star Wars.
****
Dagan saw the first Star Wars movie when he was three.  His very first trip to a movie-theater, too!  My first serious boyfriend from high school (we were and are still friends), Alan, had just seen the movie.  He was soooo wound up!  Told me Dagan just has to see this movie and offered to take us--right now!  I wasn't sure Dagan was old enough to go to a movie theater but, to be honest, both Dagan and I were totally infected by our first exposure to StarWars fever and I agreed we'd go.
****
That's how we ended up having, literally, a front row seat to an experience we have never forgotten.  No, I've never watched a movie that close up before or since, but the theater was packed and it was either that or sit way in the back row.  Alan said the back row was not acceptable for this movie...and he was right.  That opening blew us away!
****
I've also never been to a movie before or since where the audience oohed and awed--and screamed--and booed--and laughed...and then stood to clap and cheer and hoot when the force was with Luke!!  Not like any proper Minnesotans I had even seen.  I loved it!  Dagan loved it!  I hope this new one is pretty decent.  (None of the rest of them have ever lived up to that first one IMHO.)
****
Anyways, have a great day--and may the force be with you.  :):)
****
"You are not a drop in the ocean.
You are the entire ocean in a drop."
Rumi
Posted by Rita at 3:52 PM

Ian is (as Always) adorable!! May the jackrabbits dance forever in the nightclub of your mind!!

I LOVED Breaking Bad and knew nothing about the prequel. It's now in my request que from the county library. Thanks! My son, too, was totally obsessed with Star Wars. For his 30 birthday I gave him an original Yoda action figure still sealed in its original package. I got it on super clearance and saved it for over 25 years! Another SW share. . . We found out over Thanksgiving week that my daughter-in-law, who's a professional chef, catered a party in the Hamptons last summer and met Harrison Ford!!! She doesn't watch TV and has seen very few movies so she wasn't at all star struck. But even she realized that was a pretty cool experience. She said there were a lot of other celebrities at the party, but she didn't know who they were :( Thanks for sharing all the pics and videos. I wonder if you could set up a video cam to run all night to catch the action? Wouldn't that be fun! Have a great weekend!

Ian is definitely walking like a toddler and not a drunken sailor! I will wait awhile before I head out to that movie. I hear good things about it, though! :-)

I can't believe how many jackrabbits you have there! There a ton of tracks outside your window. You have such a diversity of wildlife that has shown up this winter which has been fun to read about. Ian is getting so big! How quickly times passes.

Loved seeing the Jackrabbit Nightclub. They were quite rowdy, weren't they?

I saw a few (maybe two or three) episodes of Better Call Saul. I didn't like it, but I loved Breaking Bad after I saw the entire marathon right before the final episode. I'd never seen it before, and seeing all of them in a row was incredible. I didn't realize Saul was the prequel to Breaking Bad, though. I guess because I didn't see enough of the shows to get into it.

Star Wars was AWESOME. It was the first movie I saw on a big screen. I remember the rumble of the Death Star as it entered in the opening scene. It caught my attention, and I was hooked. I saw the next two, but not the prequels that came years later. I hope Dagan liked it, because I hope to see it before it reaches commercial tv. I haven't been to a movie since 2008, and now all I watch are the ones shown on the networks.

I’ve not seen StarWars yet, it’s only just arrived over here to rave reviews.

Hasn’t Ian grown; but he still can’t quite figure out how to decorate the tree, maybe next year.

Have a merry Christmas, old girl, and look after yourself.

Ian is so adorable, love the snow it looks so pretty but I know when it melts it isn't so pretty, also I have only seen one Star Wars movie the first one never been interested in them

Adorable videos of Ian ♥ Your Jack Rabbit Night Club does seem to be very busy :) My son has seen the new movie 3 times already. He went by himself the first time and then too each of the girls individually on dates to see it. He loves it. I think he's seen them all at the movies and is a true Star Wars Geek .

Oh I hope you get to see those Jack Rabbits! That's just too cool. Ian is growing so fast...love your little family. I'm curious about this Star Wars movie, but won't see it for a loooong time. When it comes out on DVD. Haven't found a theater that I can really hear at, the assisted devices just don't work for me. So I'll wait for my subtitiles. I heard it has a bit of a Disney undertone. But that's all. Whatever that means.
I hope you have a magical holiday. May the force be with you. xo

Rita, I just saw your question on my blog post about tip-ins. A tip-in is a decorated page you add in some way to an altered book or journal. You are correct, in that some people add them to journal pages using such things as washi tape or decorative duck tape. To add them to an altered book, you traditionally cut two consecutive pages to within 1/2 inch of the gutter, then place either tape or glue along both inside edges. Add the decorated page and press so the glue or tape binds well. You have now tipped a decorated page into a book. Alternately, you can use a binding machine or rings to add them to a hand bound book. Thanks for asking, and if you have more questions, feel free to ask.

Ian is just such a little munchkin.. I love that age.. and it only gets better. And lovely to see you too.

I hope you see some of those rabbits before too long. They're much more fun to photograph than poop. ;)

star wars fever hits some folks and stays with 'em for life. :)

ian is growing so cute! nice snows and really glad you'll have both cars available.

A jackrabbit party! I think they must be confused. It's almost Christmas, not Easter! ;-)

Have a very Merry Christmas!

You have snow - lucky you! And Ian is adorable.

Goodness. Those pooping rabbits should pick up after themselves!!

I think they are calling for 60F here on Christmas. There will be lots of mud! Anyone for making a Mudman complete with carrot for a nose?

I am envious of all the snow. It has been in the 60's here, it has been crazy, but then it will get down to like 30 at night, then rain. Oh fickle TN weather. And it is to be 78 or so on Christmas, so sad, I wish it were a white Christmas. It shall snow in March I am sure. Great to see not only Ian but your lovely face as well! :)

It was nice of those jackrabbits to leave those "little" gifts outside your window. lol

Loved seeing the videos of Ian. Kids grow up so fast. You're lucky you can have these to watch later. :)

Wonder what you thought about the new Star Wars movie. We just saw it last night for Sophia's birthday. I liked how the familiar characters we saw in the first movie were brought back and integrated right into the new story.