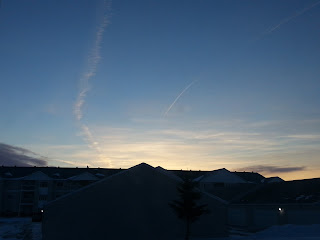 This past weekend as I was taking evidence pictures... 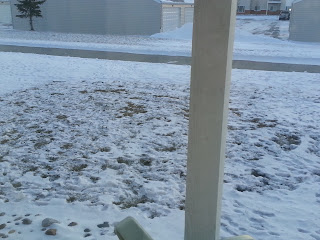 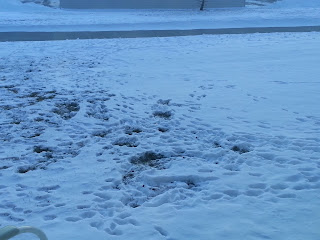 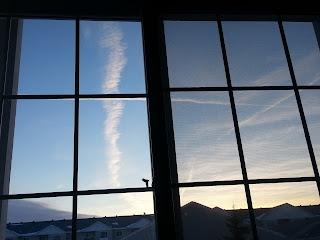 ...Miss Karma was waiting for her canned treat... 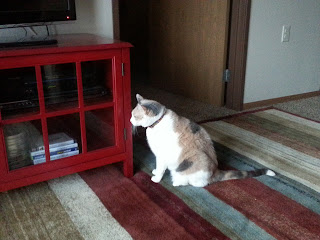 ...complaining mildly about my being sidetracked... 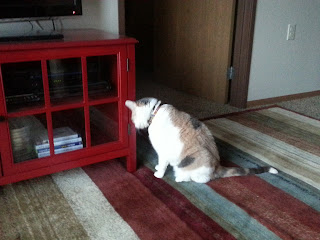 ...and rubbing her head on the TV cabinet. 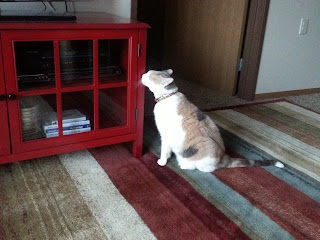 Turned out that was grouse day!!
****
Since the rabbits had dug away some snow for them, the grouse came by several times--so I finally caught them on video!  The second time I saw three of them go by on the patio and then there was a gap in the grouse procession, so I grabbed my cell phone...
They even make cute tracks. 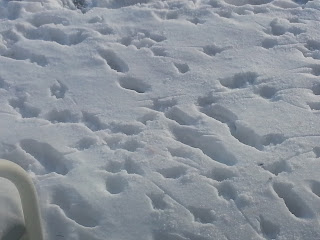 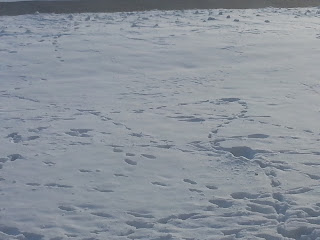 The third time the grouse gang passed through they didn't even care (or never noticed) that Karma was sitting like a statue watching them. 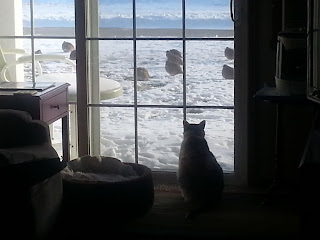 I think there were 19 or 20 of them counting the first three that went by!  More than I thought.  :)
****
Haven't seen them since.
But maybe you can see across the way there that the wind has now blown away more snow to reveal grass all along that side of the walkway so there are probably a lot more places to scratch out some nibbles. 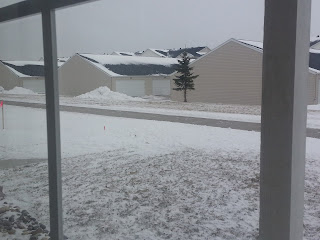 The spot by my patio used to be the only place I could see with visible grass.  It has not been cold enough to melt (22 degrees right now), but the wind always moves the snow around up here if the snow is dry enough.
****
I guess we are in just the right spot for grass peekage if it's possible and the snow isn't too deep--because look up the other way--all white yet. 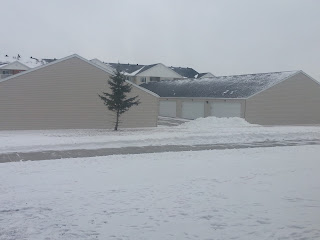 Hey--humor me, okay?  I was up in the air on third floor for ten and a half years and the only thing we saw up close were the occasional baby swallows that landed on the porch railing--LOL!  This is exciting entertainment for me and Miss Karma.  Just love being here so much!!  :) :)
****
Anyways, Karma is sitting right beside me in her chair. 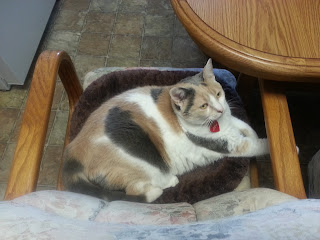 I just made coffee. 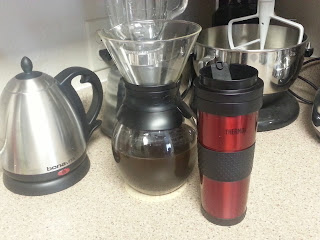 That's for the T-Stands For Tuesday group!  Hi, ladies!  I won't be able to stop to see what everyone else is drinking until later on because McFamily is bringing lunch over (that yummy pesto noodle dish they make).  They are stopping by to drop off the Galant and have a little visit before they head off to Henning, Minnesota for the holidays (Dagan's dad's).  Both Dagan's stepbrother and half-brother and their families will be there all week, too.  Neither of them live in the area--or this state even.  They haven't all been together for a while so that will be nice.  :):)
****
If I don't talk to you in the meantime, Karma and I will be snuggled in watching It's A Wonderful Life and A Christmas Story as we do every year.  I wish everybody safe travels, good weather, and fun times!!  Love and hugs from Fargo!!  :)
****
“Joy is a net of love that captures souls.”
Mother Teresa
Posted by Rita at 11:11 AM

What a lovely winter scene! I enjoyed the video, thx :)

Loved the video, nice to hear you! How lovely to see grouse, never seen them here! Karma has the best window TV ever! I love the way they walk, too funny. Have fun watching them! I wish you and yours a happy Christmas, have a great time and look after yourself! Happy T Day, Hugs, Valerie

Oh, I'm so happy that you got into this new place and that you share your excitement and photos with us.

I did a lot of watching tv when I was out with the crud. I had forethought to tape many of the *old* Christmas movies and they kept me entertained as I coughed my head off....LOL
I still have Miracle on 34th Street to watch, It's a Wonderful Life has been watched, but not erased.....the old black and white versions.....they were always my favorites.

Wishing you and Miss Karma a Christmas full of Love, laughter and all the joys of the season.

How fun to have wildlife to entertain you.
The grouse are cool to watch.
Maybe you'll get a video of those jack rabbits sometime too.
Nature is an endless source of entertainment if we take the time to notice.
Sending all good wishes for a warm and cozy holiday for you and yours Rita...
Meow to Karma too
Happy T Day oxo

I so enjoyed your little film, I have a soft spot for wild birds! Your grouse reminds me of ptarmigans, which I guess is a variant of the same bird. I wish you a Happy T-Day and a very Merry Christmas!

What a delightful video ~ I enjoyed it almost as much as Karma ~ You seem to enjoy the ground floor ~ but Karma doesn't get outside now but lots to see for both of you ~ Those grouse are cute little chubbies probably bigger than my dog ~ Sending lots of Holiday cheer and hugs to you and Karma ~ thanks for the video!

Wishing you the magic and love of the season,
artmusedog and carol

I am so happy that you are content in your new home! It was cute to see the grouse walk by. Wishing you, Karma and the rest of your family a very Merry Christmas & Happy T Day. Temperatures here are predicted to be 70 on Christmas,so no snow here in NY.

I enjoyed your video. It was fun to hear your voice narrating too! Hope you and Karma have a very happy Christmas week!

I do understand how entertaining those grouses must be-for both you and Karma! Your snow looks pretty and I especially love that it is via internet. We are expecting a 100 year old record breaking warm day for Christmas (70-73 F) and I couldn't be happier. Despite two very cold days it is again warm. Wishing you a happy T day and a very Merry Christmas to you and your family!

Merry Christmas to you & Karma & the entire McFamily!!

Sending love and warm snuggles back your way! :-)

First, I want to apologize for being so late getting here this Tuesday. I was out all day, then got home in time to crash. I just woke and realized I had T visitors I had not seen yet. My apologies.

The wonderful nature show outside your door must be so much fun to watch. I am sure this is a perk living on the ground floor, too.

Wow, pesto noodles sound so, so yummy. I am probably hungry after my long nap, but that sure sounds wonderful

Thanks for sharing your nature video, Karma's fun antics, and of course, your lovely coffee pot and mug with us for T this Tuesday.

If I don't "see" you before Christmas, have a lovely time enjoying the videos. Also, have a wonderful day filled with joy and laughter. Merry Ho! Ho!

it really Looks wintery and i never saw grouse in real. all Looks cozy and calm and that is my wish for you and yours over the Holidays, too!

Oh Rita - thanks so much for this lovely video - I enjoyed it so much - they are soooo cute!
Super that you and Karma have such an relaxed Christmas!
That's fabulous!
Wishing you and Karma A Very Merry Christmas!
Happy belated T-Day as well!
oxo
Susi

I'm sure the Imax Kat TV is the best Christmas pressie Karma could ever get (second only to the treats from Tori!)

so cute!loved that video! they really are adorable. thanks for sharing.
merry christmas! wish you all the best in 2016!

Oh Rita! I so loved seeing the grouse and hearing about the rabbits! It was lovely to hear your voice! I am so pleased you are enjoying your surroundings! I'm sure you will enjoy the changing seasons from your window too - and Karma of course! Wishing you a very Happy Christmas! Hugs, Chrisx

Those Grouse are so darn cute. I love to see them waddle by the patio doors. So happy that you are in such a great place now and you and Karma enjoy your new home so much. Wishing you all a VERY MERRY CHRISTMAS!!!! ♥

You and Karma have a lovely Christmas in your new home! :)

Those grouse are so super cute! My friend from http://www.stilusessaywriting.com/ told me that they look like small balls) I'd like to see them on my own eyes. Besides you have such a snowy weather there. That's cool cause here it looks like spring at all.

Hi Kindred, wonderful pics! Karma is so sweet! So lovely to see all that snow, for the first time ever, we have a green xmas here in cold-Canada? wild!
Wishing you a magical holiday and a phenomenal 2016!
hugs
Victoria

Just dropping by to wish you and Karma a very Merry Christmas! It's 3pm in the afternoon here on Christmas Day. We had a lovely morning at Michelle's and Alex's place.

I enjoyed the grouse video a lot! They're so darned cute! I love bird-watching. We have crows and magpies come twice a day for food. Jack is not impressed. hehe

I hope Dagan, Leah, and Ian have a happy and safe trip.

We will probably be watching It's A Wonderful Life tonight. Watched Miracle on 34th Street last night....such a nice movie.

Loved all the pics!

The video of the grouse was adorable! I bet Karma never would have guessed this new place would be so entertaining.

Those are some pretty fat looking grouse. The ones we have around here are slimmer. Maybe these have extra thick feathers to keep out the cold you get up that way.

I hope Dagan and Leah had a nice holiday with his family. Sounds like a nice get-together.

You could have supper! That is a good number of birds! Grouse isn't too bad:) Hope you had a good Christmas! Fun to see out your window...we have regular bunny rabbits here until the coyotes of fox move in...seems they follow the food:)

I wonder if they are really Prairie Chickens:)

Looks officially like winter up there with the snow now. You are so lucky to see all those grouse. Karma cracks me up just sitting there so still watching them. :)

I started reading this post quite awhile ago, but I never finished it until tonight so never commented until now. Sorry, I'm way behind in reading blogs. It's been a helluva month and a half (and more) for me.

I'm glad you and Karma like the new apartment. It'll make things so much easier for you, and when spring rolls around, you'll have more things to see thru those windows.