Good Afternoon!
All my plans... 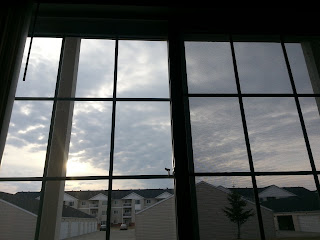 ...could you hear God laughing up here in Fargo?  :)
****
After I posted (3 1/2 weeks ago now) three days later I was dreadfully sick with 102 degree temp.  Slept for 2 1/2 days and then pooped for the next two days.  (Spent my birthday in the bathroom--LOL!)  Fever finally broke.  I hadn't eaten and only sipped on water for over four days.  Much to my surprise, I discovered I was so dehydrated and weak that I could barely lift my hand high enough to comb my hair, was dizzy (or dizzier than normal), and could barely walk.  Gatorade to the rescue--LOL!
****
Caroline was getting groceries for me and picked up several big bottles of Gatorade for me.  She even unloaded my groceries for me, too.  A few days later Leah dropped off more bottles of Powerade, too.   That helped me get back enough spoons to be able to shower and cook.  :)  Not that anything tasted right for another week or so.
****
As soon as I was off the porcelain throne, then the cough and head congestion started up.  I sounded like a frog for a couple weeks.  I'm still not totally well, but definitely on the tail end of it all.
****
When I was too sick to even get dressed Karma had to settle for peeking through the blinds all day. 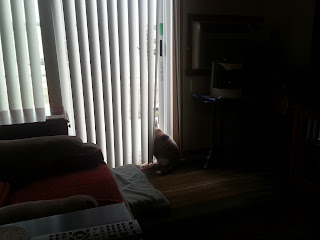 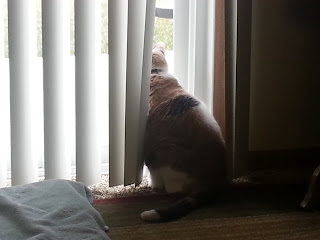 ...but was thrilled when I was finally able to throw some clothes on and give her some real sunbathing time. 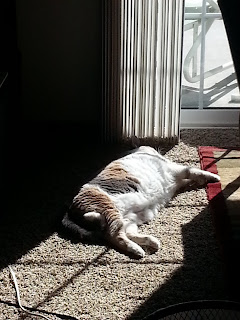 The jackrabbits are pretty much brown again. 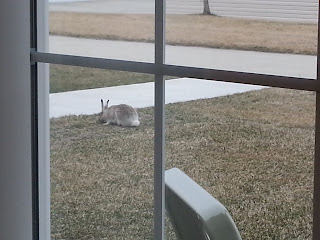 I see them regularly. 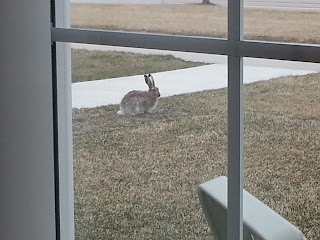 Erratic spring weather is here.  Warmer one day...a dash of snow the next. 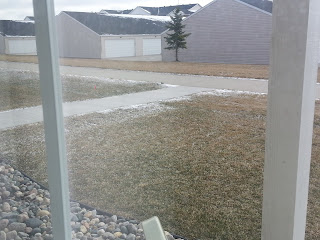 Leah came over for Craft Nights on Mondays the past couple weeks.  A couple weeks ago she helped me put together Thank You cards and other cards from our watercolor/emboss resist play we had done before I got sick.  So I was able to send out my Thank You cards for the sweet and thoughtful birthday gifts.
****
Mr. Ian loves trucks.  Calls any piece of big machinery a truck, really.  So I got him "My Big Truck Book" this month.  But I was so sick I hadn't been able to see him for weeks. 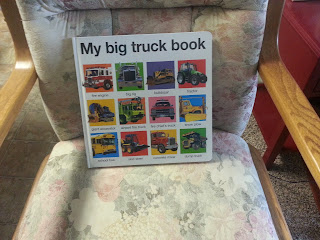 Last Friday Leah and Ian dropped by for a couple of hours.  Was a sunny day... 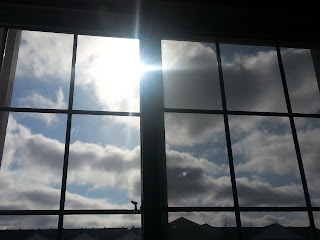 ...and Ian didn't want to take off his new sunglasses! 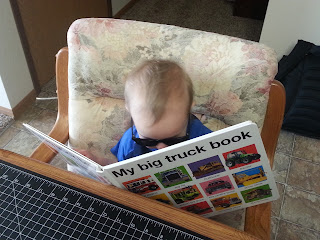 He loved his big truck book!! 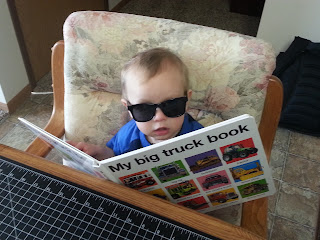 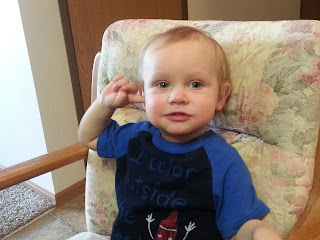 I also got him a paint with water book that you can let dry and reuse over and over...and he loved that, too.  They stayed for lunch.  (He really knows how to charm Gramma!) 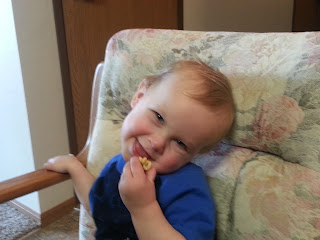 He was due for a nap...and was excited to go home to show Daddy his truck book.  (Dagan works half days on Fridays.) 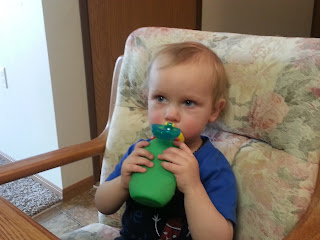 My Aunt MaryLou died.  She'd been in fragile health for some time and was my Mom's younger sister.  I like to think of her as finally reunited with the love of her life (she dearly missed)--her husband, Irving.  :) 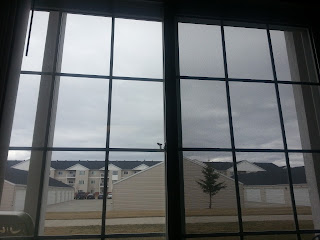 I hadn't seen the Canadian Geese for a couple of weeks.  There's suddenly a pair wandering by on occasion again.  Not sure if it is the same pair or another pair, but they are quite magnificent.
****
Small flocks of these tiny birds are around every day chittering up a storm.  They're even smaller than the little brown house sparrows we have around all winter and have white bellies.  They are so darn cute!!  Karma loves to watch them.  Can you see her down in the right bottom corner? 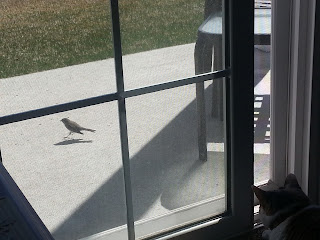 I hadn't seen any of the grouse for like a month or more.  Ever since all the chasing about began and the snow melted.  But a couple days ago I could hear them outside someplace and discovered two of them poking about in the grass outside my bedroom window near the young tree there.  Had to shoot through the screen, but I was so tickled to see a couple of them after such a long time.  Not sure if I'll see them much at all this summer. 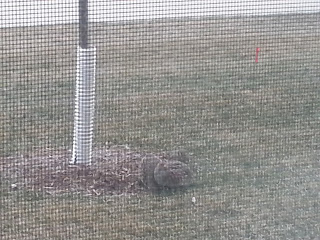 When the North Sky calendar came out in April I saw that for the first time they had a couple of Monday nights (11th and 25th) listed as Craft Nights!  Well, you know that since I was the one bringing it up all the time I had to try to attend, right?  Luckily the first one wasn't till the 11th and I wasn't coughing as much by that time.
****
Mondays are normally Leah and my craft nights, so I told Leah right away when I got the calendar in case she wanted to meet another night or get together later than 7pm (the group here meets at 6:30pm).  But she said she'd like to come with!  Nice!  So, she came over early on Monday and we filled up my little cart and rolled it down there at 6:30pm.
****
Leah was working on her Christmas gift tags and I was cutting up a ream of white cardstock, so we had a variety of paraphernalia to haul down.  Embossing powders, heat gun, my Dahl cutter, the MISTI, and my Martha Stewart scoring board.  We were the only people who showed up to actually craft--LOL!  There were half a dozen other people there.  A couple were playing cribbage and we got asked a lot of questions by the ladies who hung about to chat and were quite curious about what we were making and how the devices worked.  We were down there for a couple of hours.  It was a good night, regardless.  Possibly a good start--maybe?  ;)
****
Out of all the activities they have here the one that interests me the most, of course, is a craft group.  So I will keep trying to show up.  (They might list it in the afternoons sometimes, too, I guess.)  And Leah is game, too, when it's in the evenings.  Sweet!  Leah and I were already talking about maybe having a night sometime where people could make a card or two to take with them.  It wouldn't cost me hardly anything to do that once in a while.  Leah and I will bounce around ideas this next Monday night when we're just here at home.
****
I know it will take a while to get any of these groups off the ground and going.  There hasn't been a big response yet for much of any of the activities, I guess, from what I've heard.  I'll be persistent about the Craft Group, though.  You can bet on it.  ;)
****
Yesterday Caroline came to clean.  It was unbelievably gorgeous out!  Sunny and may have gotten up to 70!  Best of all--the ferocious winds died down for the day so that I could have the patio door wide open all day and into the evening!  Right now it is actually 71 degrees, but it has been viciously windy all day, clouded over, and feels much colder than 70 degrees.  Supposed to rain tonight and tomorrow, so the dampness probably makes it feel chillier, too.
****
But when the sun shines...Miss Karma soaks up the rays.  [Karma wasn't happy with me when I was sick and she had to push her way behind the blinds to park herself in a sitting position to catch a bit of the morning sun.  Karma's a sprawler by nature, she'll have you know, and I was making life difficult for her.] 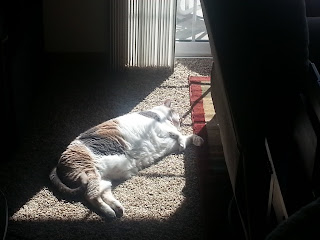 So anyways, all my plans to get more done...ha!  I've spent almost the entire time away from blogging and being online much at all--just being sick--ROFL!  Such is life, eh?  I just pray that now I will finally get well and stay well.
****
Thanks to everyone who remembered me on my birthday.  And to everyone who asked about how I was doing...means a lot to me.  I wasn't sure anyone would notice I was gone.
****
I am pretty much feeling human again.  Looking forward to hearing the predicted thunderstorms coming our way.  I do love thunderstorms and this would be the first one this year so I hope the weather-guessers are right this time.
****
I have to say--I was feeling rather sorry for myself that I wasn't able to do more and still had so few spoons after all these months had gone by since the move...and then I got so sick I couldn't even shower or get dressed or make toast.  Was an excellent wake-up call for me.  Do not complain.  Do not worry about what isn't.  Appreciate whatever you have...whatever you can do.  It could always be worse.  Yes.  It could always be worse.
****
I'll be back.  Not sure when, but I certainly hope it won't be nearly a month next time.  I'll leave you with this story.  I swear I thought I heard Buddy Hackett tell this one night on Johnny Carson and I tried to find a clip to no avail.  Oh well.  It came to mind as I was writing and I found a written version.  :) :)
****
A little bird refused to join the flock which was flying south for the winter. It refused to listen to its parents and elders thinking it could tough it out.  Winter came and it was so cold that the bird froze and fell to the ground covered with snow. A cow came by and dropped some dung on the bird. The pile of cow dung warmed the bird and brought it back to life. It lay there all warm and happy, and soon began to sing for joy.  A passing cat heard the bird singing, dug the bird out of the pile of cow dung, and ate it.

Morals of the story:
(1) Don't discount experienced advice of people who care for your success.
(2) Not everyone who shits on you is your enemy.
(3) Not everyone who helps you out of a pile of shit is your friend.
(4) And when you're in deep shit, it's best to keep your mouth shut!
Posted by Rita at 4:44 PM