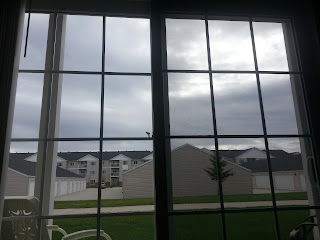 Another cloudy, chilly day--but look at the grass! 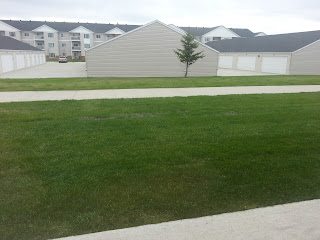 They actually came to mow and trim for the first time yesterday.
****
While I was sitting in the small recliner to take these pictures Miss Karma started begging for a foot pet. 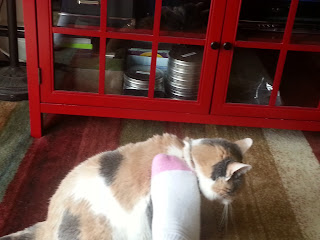 She only lets me (and on rare occasions, Dagan) give her foot pets. 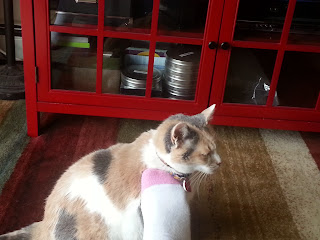 I can even scratch her neck. 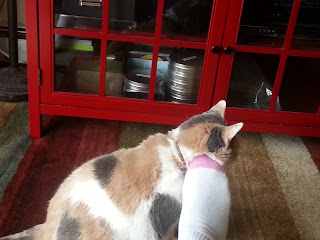 Well, Leah and I were planning to go to the second Craft Night here in the community room on Monday.  That afternoon the new calendar was tucked into my door and come to find out there is not one craft night listed for May, but there are three afternoons.
****
Long backstory:
The lady who does the calendar and is trying to start up these various activities has been trying evenings and afternoons for various activities.  There are now Movie Nights and Afternoon Movies, Game Nights and Afternoon Games, etc.  She wants to see if more people would come to an afternoon group or an evening group--which makes sense.
****
Two weeks before when Leah and I went to that first Craft Night (and the only craft group event before she made up the new calendar) I told you how we were the only people who actually showed up to craft.  Other people hung around and chatted and it sounded like some people were interested in bringing needlework.  The calendar lady sat at our table with us for most of the evening as others came and went--and the couple playing cribbage that set up at the next table chimed in now and then.  I mentioned how it takes time to get an activity going, but we'd try to be there.  (Assuming she was sticking to Monday nights because she only had the two Monday night craft groups in April, right?)
****
Because of people who came by to see what we were doing--and a couple of them sat down with us for a while--the calendar lady heard me 2-3 times introduce Leah and tell people how Monday nights were perfect because that was the night Leah and I usually got together for crafts anyways.  Calendar lady mentioned that she might throw in an afternoon, too...a couple of times.  (Afterwards I realized that it was every time I mentioned Monday nights being perfect for Leah and I to come.)  I responded every time with saying that Leah couldn't make it in the afternoons, but I probably could.
****
Leah was certainly not intrusive.  She's a soft-spoken, quiet lady who worked away all evening, but would take the time to explain and chat with anyone who asked her questions.  And she and I chatted a bit telling them about us making Christmas cards together, etc.  I'm the louder, more vocal one--LOL!
****
So, when I looked at the new May calendar and saw there was not one single craft night (nothing whatsoever on Monday nights for the first time, for that matter) but three afternoon craft groups...when we had only had the one single first ever craft group meeting that Leah and I were the only ones who came to craft and there seemed to be some interest and we indicated that we would be there...well, what would you think?
****
I took it as a passive aggressive way to say they didn't want Leah to come.  Age prejudice, if you ask me.  And here it was Leah who was the first one to bring up doing a make-and-take on our way back to the apartment that night.
****
Their loss.
****
So, I got ahold of Leah right away and told her about the new calendar.  I didn't want to go down there that night at all.  For one thing there apparently wasn't going to be a Monday Craft Night here, anyways...and I was much too annoyed to be around calendar lady.  So I told Leah she could take her time and not rush to come early--just come at the regular time and we'd stay here like usual.  So we had a good time creasing and folding cardstock.  Filled that black box and only have that small stack left to fold.  So we've got a lot of card bases for Christmas and birthday cards prepped. 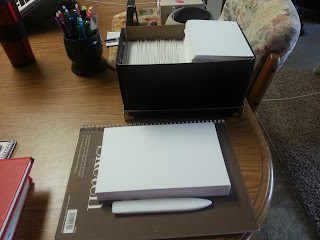 Will I go to the afternoon craft group get-togethers?
****
I'll have to play it by ear.  Right now, I have absolutely no desire whatsoever.  You don't mess with snub people I love.  I do not like passive aggressive baloney.  If they don't like non-residents coming to things--just say so.  Well, I guess they did.  Indirectly.
****
Honestly, this is why my entire life I have had trouble getting along with a lot of women--LOL!  My girlfriends over the years were always open and direct.  Basically--"what you see is what you get" type of people--or they knew they could be with me, at least.  ;)  They had to be--to tolerate me and for me to trust them as a person, you know?  We didn't have to agree on everything or think exactly alike or have the same interests, but we just accepted each other and didn't judge.  I was never good at all that game-playing, nice-to-your-face-but-stab-you-in-the-back games.  Awk!  Can't stand any of it.  My tolerance level for such nonsense has lowered the older I get.
****
Not that I won't remain distantly polite bumping into anyone and everyone in the hallways (even calendar lady), but it is possible I might not be socializing here at all or very, very little.  Even the movies (calendar lady is mostly in charge) are Disney, very GP (she's made it very clear that "they" don't want anyone bringing movies that have sex, bad language, or violence), or actual "Christian" movies.  Well, I know I do live in a very conservative part of the country...but come on!  Not that I didn't like The Apple Dumpling Gang, but I'd rather stay home and watch Netflix--LOL!
****
I don't have much in common with the people who have showed up for activities so far.  I have not run across anyone yet who I would ever think of inviting over for coffee.  If there are any open-minded, straightforward, tree-hugging hippies here...they are probably staying close to home, too--ROFL!!
****
It's no skin off my nose, as they say.  I have been perfectly content totally by myself for over eleven years just seeing Dagan & Leah (and now Ian!) and Caroline when she comes to clean or bring groceries.  Socially--I have had all of you in blogland--several of which have become pen pals!  All my friends I write to who knew me for years before I moved up here to the FM area.  And these days any stress physically adds to my pain level.  Don't want it or need it.
****
Let's just say that I am not feeling as "social"--LOL!  I will not want to jump in with both feet again like I did with the craft group.  If anything, it will be toe in the water from now on.  Odds are, if I ever do go in the afternoon for crafts I won't even bring anything with me when I go check it out...just like the other people did that first night craft group.  Such is life in the senior apartments, eh?
****
But Miss Karma and I are just fine.  Leah and Ian came by on Tuesday for a visit and I was so happy to see our little chatterbox that I never even got a picture!  He talks all the time now (even if half the time we don't know what he is saying--LOL!).  We did puzzles, read books, painted with water, and had a nature show about Antartica on while we visited.  (Gramma had been watching it before they came over.)
****
Just wanted to let you know why Leah and I didn't attend the second craft night here and why I might possibly even pass on going to the afternoon craft groups in May.  I shall be reminding myself not to judge.  They can do whatever they want.  They do not need me, either--LOL!  And they can't help but be who they are, as well.
****
Besides that little snag...I am feeling better and better.  Doing what I can to try to build up my immune system so I don't catch the next thing going around.  (Maybe another reason to not be social--ROFL!)  Had Leah pick me up some D3, B complex, and fish oil to take along with my multiple vitamins.  They're Costco brand so not top of the line, but better than nothing, I figure.  I also have a case of gatorade to build up my electrolytes--and bananas for potassium since I got so dehydrated.  I was still feeling weak and lightheaded.  Feeling stronger and a bit more grounded since Leah brought the bananas and gatorade.  She picked up some frozen fruit mix for me, too...so I can make smoothies.  Whoohoo!!
****
Well, you knew you'd hear about my adventures at the old folks home.  Now you know the latest.  ;)  It's almost the weekend.  Now that I devoured Damages on Netflix streaming, I am watching something light--Property Brothers.  I just rented The H8ful Eight.  Just as expected from Quentin Tarantino--dark with dark-dark humor--and bloody--with twists.  Recently watched The Lady In The Van, too--based on a true story.   Maggie Smith blew me away!  Since we last spoke, I've seen the Canadian geese, the jackrabbits late in the day, and tons of small birds...but no grouse.  I still LOVE it here.  (The old lady shenanigans don't spoil anything for me.)  And Baby Phil loves it here, too!
**** 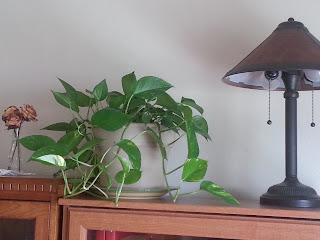 ****
Do you remember Phil from the old place that I had to give away because he got so large and out of control--LOL!  Baby Phil has really started to take off since we moved here where he gets more light.
****
And since Karma has picked her favorite chair spot to sleep (she never would sit on the other recliner over here for some reason) she seems much more settled in here.
****
So have a great weekend!!  We might hit the low 60s this weekend--whoohoo!!  I am off to make a smoothie.  :):)
****
"It is not our differences that divide us. It is our inability to recognize, accept and celebrate those differences."
Audre Lorde
Posted by Rita at 12:44 PM