Good afternoon!
Good news and bad news up this way. 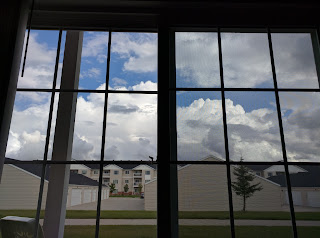 The bad news is that McFamily's cat, Sammy, died.  He'd lost some weight over the last year but seemed his usual self.  Dagan noticed Sammy was crying in a weird way one morning before work and told Leah to make an appointment for him at the vets.  Couldn't get him in until the next day.  Sammy was suddenly hiding in strange places like the guest room closet that day.  By the next day when it was time to go to the vets Leah found him lying flat on his side in the master bathroom.  He was listless and weak.
****
Brought him to the vets.  Sammy had UTIs twice before so they thought it might be that.  Leah left him for tests.  He was dehydrated and they put him on an IV.  During the day they called to request doing an ultrasound because they thought there might be more to it. After Dagan got home from work they all went to pick up Sammy, but were told that something was off on all his internal organs on Sammy's ultrasound--inflammation?  cancer?  He was no better.  They wanted to have him taken to the urgent care place to be kept overnight.  So Dagan and Ian were dropped off at home and said goodbye to Sammy...and by the time Leah got to urgent care with him...Sammy was already dead.  So fast!  In two days he went downhill like that.
****
That's animals for you.  They never want to let on that they are sick until they can't manintain any longer.  And I don't even have a picture of Sammy on this new computer to show you, but he was the handsome grey one with the blue eyes.  Now Annie, the black cat, is alone for the first time in like 7-8 years.  She was the shy one who had lived on the streets and had a litter of kittens before she was rescued.  McFamily is going on a first ever McGregor clan vacation out east for a week so I will make sure I spend more time over there when I go take care of her.  I'll bring books and letter supplies and watch movies.
****
Miss Karma has no clue, of course.  She doesn't like anyone but me...and she only tolerates me sometimes. 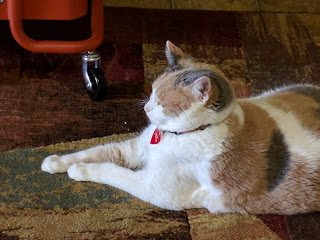 But Sammy was a few years younger...so it makes me think how much I would miss old cranky pants. 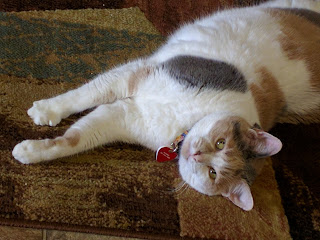 Anyways, the new recipe adventures did not go so well, either. 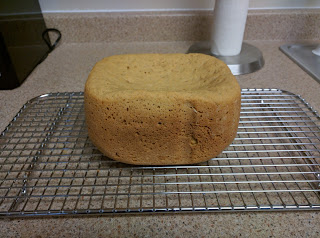 Attempting to substitute ingredients on my usual bread machine recipe... 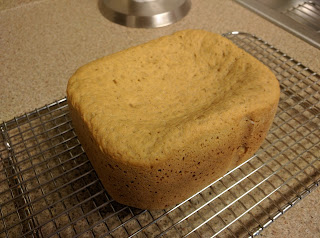 ...was basically a fail. 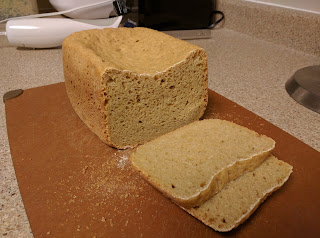 The birds love it, though--LOL! So it won't go to waste.
****
The squash sauce for over spaghetti noodles was a total fail.  Didn't like it at all.  Down the disposal. 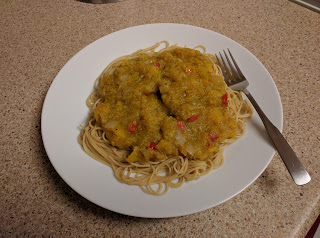 Maybe this coming week will be more successful.
****
I spent a few days sewing to get all the pads done for Leah so that she could add the snaps when she came on Monday night for crafts.  I finished!  TaDa! 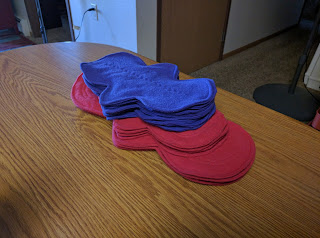 Spent a lot of days pinning and trimming fabric here at the little art table in the studio.  (Karma adjusted quite rapidly to not sitting up next to me because she doesn't like the sound of the sewing machine--lol!) 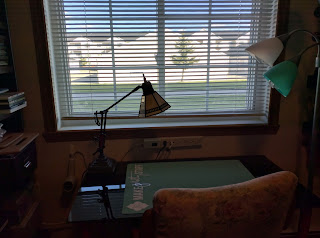 It was nice to have a laptop I can actually unplug (no instant death) and watch netflix while I worked. 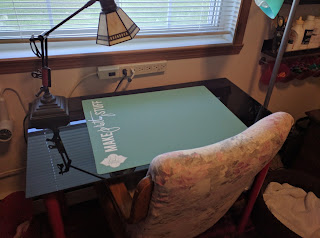 I left the sewing machine up for now because we have other sewing projects we want to start after McFamily gets back from vacation. 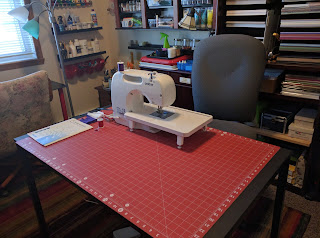 But Leah did cut up the scrapbooking papers we got on sale at Joann's so that they are ready to tape on card fronts.  She made a few to take home with her, too. 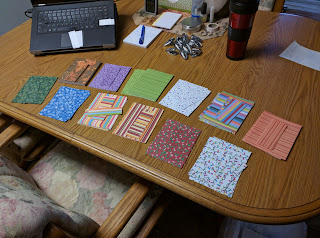 They all got cut up except for the Christmas and birthday papers.  Waiting on those because we don't even have all the paper yet.  There are more coming that we ordered.  (Still got at the sale price!)  I will start working on taping cards together while they are gone.
****
Remember I told Navarre at the meeting that my linoleum is buckling?  It's really difficult to get a picture of this, but the thin top layer has been pulling away and buckling up. 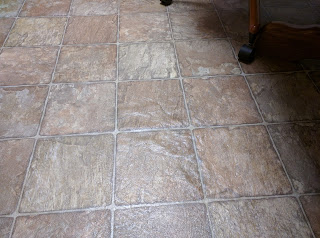 It's slowly growing and there are more areas that are getting little white spots that seem to be rubbing away from the surface layer, too.  Since Navarre has never showed up and (now I know he doesn't always respond even when harrassed about issues) I am worried about it tearing, I tried to think of something I could do in the meantime.  It is on the one side of where my rolly chair wheels are and I sit here every day.  So I took a clear plastic 12 X 12 file folder and tried to attach it to the floor with some poster tack. 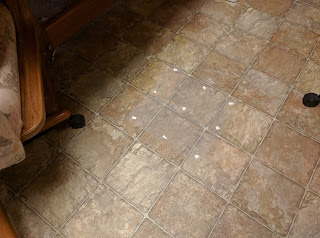 You know who rushed right over... 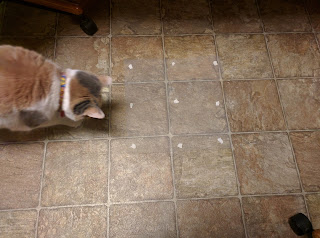 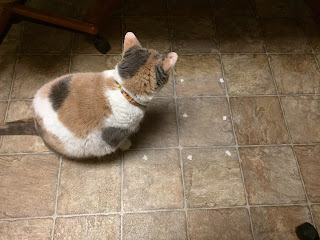 ...smelling and pawing at the poster tack dots--LOL! 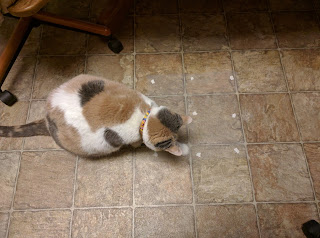 But it still moved around a lot.  I have since tried bigger globs of poster tack in just the four corners.  Still moves, but I keep repositioning it because,hopefully, it is protecting the flooring until they do something about it...which could be months.
****
We were supposed to have the library volunteer return on Tuesday the 13th (second and fourth Tuesdays).  A few of us waited and waited but she never showed up.  Then on Friday I get a knock on the door (from one of the ladies who had waited on Tuesday and knows where I live) to tell me the library girl was there??  No warning or anything?
****
Turns out Navarre knew she had to switch the days and never posted anything or told anyone.  His attitude is nobody comes to anything anyways.  Navarre is making enemies here, I can assure you.  That's the same reason he won't let us make copies of the calendar for all the residents, too.  (Can we say glass half full kind of guy?)
****
Anyways, it was nice to see Kirsten again.  She even had a book for me!!  And she'll be back this coming Tuesday so I have a lot of reading to do before then--LOL!  Hey--I was busy sewing.  ;)
****
Also felt practically accosted by the calendar lady (Lenore) while I was down there about the Christmas tree issue.  She wandered in (didn't even want a book) ended up with one hand on the back of my chair, the other on the table next to me, and almost shouting in my ear.  There had been only three of us there--Kirsten, the lady who came and knocked on my door (Bev) and me.  I refused to turn and look at Lenore as she went on and on about Navarre not giving "us" an answer about being able to have a Christmas tree and how it's because she's sure "those people" don't believe in Christmas and how we needed to have a petition...on and on it went.
****
(Didn't I tell you--Lenore was going on about this months ago--this is why I avoid going to anything here!)
****
I told her Christmas trees have nothing to do with Jesus and that I didn't care to get involved because I didn't really care if we had a tree or not in the community room because we can always put up a tree in our apartments if we want to.  She basically didn't acknowledge my comments, but at least she left a little while after that.
****
Even going down for library days can be exhausting--ROFL!
****
Meanwhile, the good news!
****
Preface: a few days ago I decided to just see what the birds would do if I cleaned out the water platter and used it for seed.  We've still had so much rain and then I can pull the seed up under a chair or in the apartment if I need to.  I think they miss the water, though, and I plan to go back after I use my glue gun to attach some feet to the bottom that Leah picked up to keep so many bugs and worms from hiding under the water dish--LOL!  Anyways, that is why the platter has seed in the picture below.
****
I was at the sink in the kitchen when I heard that familiar clucking sound...and there they were!! 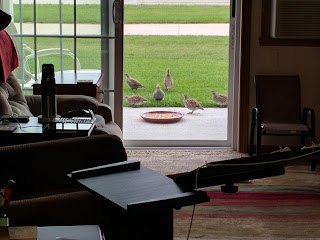 GROUSE!!!!
I hadn't seen any grouse for like two months!  I got this picture before they fled, but there were about eight of them altogether!!  I was delighted--absolutely delighted--to see them.  :)  :)  Was afraid maybe they were gone for good, too.
****
And I forgot to tell you that after the big meeting when I was so depressed about the ground squirrels...I saw an actual gray squirrel cross the grass over by the garages!  So, eventually when the trees grow a bit more around here we could have actual squirrels.  They won't be able to kill those off.  Made me so happy to see that gray ball of fur!  I know a lot of people hate squirrels, but I love them.  Maybe the jackrabbits will be back this winter, too?  :)
****
So that's what is happening up this way.  I haven't started watching the newest season of The Walking Dead yet and the new season of Longmire will be available on streaming, too, tomorrow.  But I need to read--LOL!  Wish me luck.
****
Have a great weekend.  Don't let anybdy yell in your ear...and take delight in those small wonders.  The geese are yacking their way across the sky.  Happy change of the season--whichever it may be.  :) :)
****
OMG!  As I was proofreading this to hit publish--the flock of grouse is back.  They are clucking away and pecking at the seed out there.  I am grinning from ear to ear.  And I love this anonymous quote.
****
"The really happy person is one who can enjoy the scenery when on a detour."
Unknown
Posted by Rita at 4:49 PM