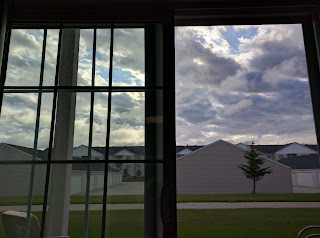 I don't often write later in the day but I wanted to tell you about the big meeting last week here at North Sky and keep you abreast of the recipe experiments.  :) 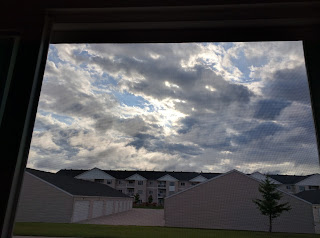 You may recall that Leah helped me out when my thumb/wrist was acting up by baking the squash I had here so it wouldn't go bad.  My hand was better after a couple of days so then I was cooking up some new-to-me recipes.  This was a vegan recipe because the butternut squash soup had a little bit of olive oil in it and I topped it with a vegan sour cream. 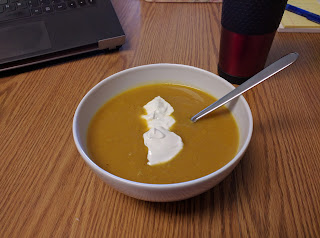 The Tofutti sour cream was really good in this soup. 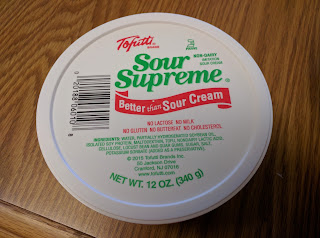 As you can tell I am kind of leaning toward vegan first, but this is an adventure for me, I tell you.  I have certainly not combined things like cumin, chili powder, cinnamon, apple cider vinegar, tamari sauce, lime juice, and apples in any soup--LOL!  I didn't even have any coriander, so it's now on my grocery list.  The verdict--I would make this again.
****
Then I put together this corn, black bean, and peppers topping mixture that goes over spaghetti squash. 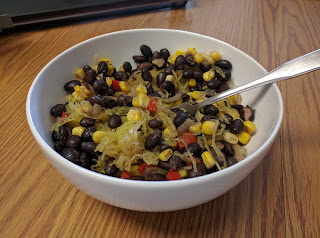 The verdict--better than I ever expected and would definitely make this again.  This is quite an adventure...and I have lots of leftovers.
****
Meanwhile, we have only had sparrows and mourning doves coming to eat for many weeks.  The grackles have moved on south, I believe, because I'm hearing geese every day now.  The grouse disappeared a good six weeks ago or more.  The ground squirrels...same thing.  I saw one once a couple weeks ago...briefly.  I haven't seen the jackrabbits, either.  I figured that the construction nearby has pretty much dug up all the wild land and they've maybe moved out of the area.
****
Karma still loves to watch the birds that do come.  One of her favorite places to observe is behind the chairs where she doesn't scare them away. 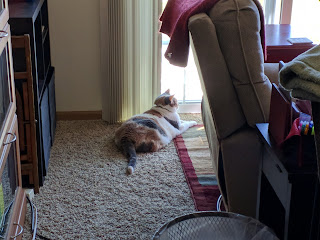 We still get quite a few of them... 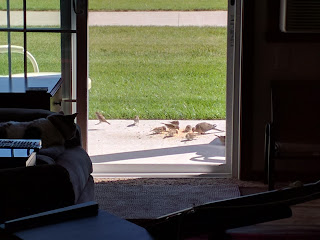 ...and the sparrows love taking community baths, too. 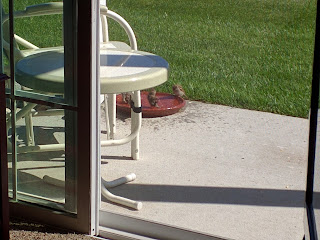 Karma can be really comfy up on her chair. 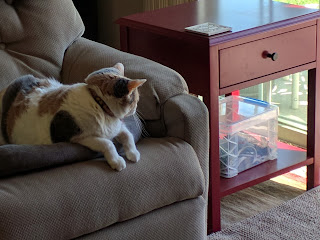 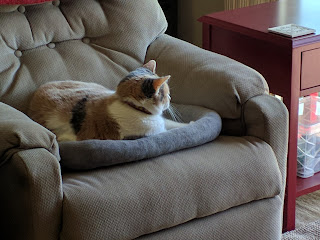 And way back by the apartment door is another favorite spot for bird watching. 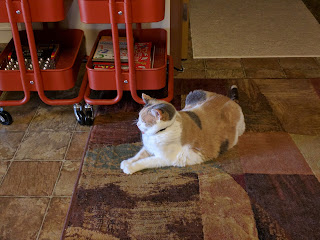 Well, let's see...
Mr. Rusty is still so hard for me to type on.  Finally today I covered up the keys I don't want to hit and the half of the finger-mouse pad area that I don't want to touch and that is helping some. 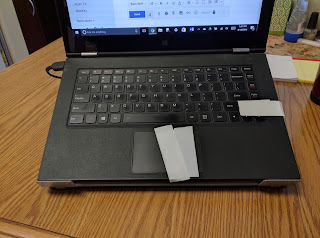 Mr. Rusty has bigger arrows that are right up where I was used to hitting the shift key--plus those other weird keys off to the right there that I hit by accident, too. 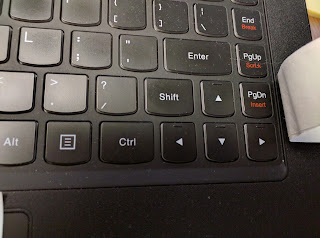 McLap has the arrow keys down below the shift key and they're smaller--and McLap doesn't have odd keys off to the right of the enter and shift keys, either. 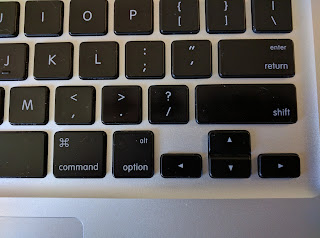 It's been really rough trying to retrain automatic muscle memory.  I am hoping the tape will help.  Oh, and with McLap the entire finger pad area was usable, so that's what I am used to.  You had to do a right click using two fingers on the Mac (which took me a long time to learn).  But with Mr. Rusty anything on the entire right side is a right click and that is another constant wrong thing I am doing that drives me crazy--LOL!  I am making progress, though.  Very slowly--but I am seeing some progress.
****
Since the grackles are gone (they are kind of the neighborhood bullies) the doves have been around a lot.  There's four or five of them, I think.  One loves to just hang around.  Often seems to take short naps in the rocks by the building or sitting right in the seed pile. 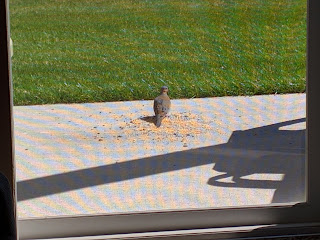 There's only one in this photo but I often see two or three of them sitting up on the peak of the garage across the way watching to see when it is clear to come back and snack after walkers have scared them away. 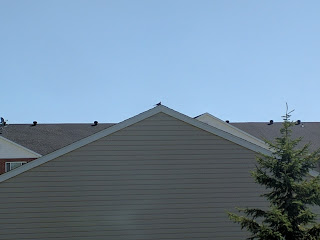 They are often waiting on the patio for me in the morning or waiting up on the garage peak.  Kinda sweet.
****
Well, time to tell you about the big resident-management meeting here last week.  Our manager, Navarre, was there and a guy who was apparently a kind of go-between for the three sets of owners/investors who are building the complex.  I don't remember his name but the building guy ran most of the meeting.  (Good thing, as Navarre does not excel in people skills--LOL!)
****
The residents had presented a letter of complaints, concerns, and requests to Navarre a few weeks ago and this was the response to said letter--an official meeting.  The place was packed!  There were really no big surprises and very little accomplished.

~There will be only one big dumpster for all three buildings.

~The third building is supposed to open in October.  (But you saw in the video of Ian's walk with Daddy and Gramma that they hadn't even finished the siding at that time, so I would be shocked if people start moving in that soon.)

~They are not planning to put any benches outside anywhere, let alone the picnic table that had been suggested.

~You aren't supposed to have anything at all outside your apartment on the walls and I don't think doors (was such an uproar that I am not sure I hear the verdict on over-the-door hangers).  [I have had a small wreath up since I moved in and do not plan to take it down unless personally told to do so--and I said that right to Navarre, chuckling, after the meeting when we were discussing him coming to see my kitchen flooring that is buckling--he sighed and said he'd look at the wreath when he came down with the camera for pics of the flooring....which he hasn't done yet.]

~There will be no more automatic doors with the button for handicapped residents other than the ones that are already there right now.

~Navarre said there are not supposed to be any cars in the parking lot.  (Huh?!)  Only when you know you will be coming back out later that same day.  Or, briefly, vehicles of visitors.  (So when McFamily goes on vacation end of the month and I have their car parked out there every day because I need it to check on the cats and there's no room in my garage for it--I guess I have to go tell Navarre so they don't tow it away or something.)

~There was a big to-do over Navarre saying that we are not allowed to use the oven in the community room because having a fully-functional kitchen is in their advertisement.  He insisted that unless a single person has checked out the use of the community room for a function (say all your family is coming for your 90th birthday, for example) and someone is therefore held responsible for the cleaning of the oven--no dice.
****
People said--what if we want to just keep some food warm in the oven for the pot luck.  Navarre said no.  Even building guy whispered to him a couple of times as the protests got louder.  Navarre finally agreed to allow food warming but no food cooking.  (I brought down a bunch of aluminum foil oven liners to donate to the cause yesterday--really, you just have to laugh!)  People said that when they have movie night they sometimes make pizza.  No, said Navarre.  No pizza to be made in the community room oven.