Goodness sakes!
There is just too much going on around here lately.  Well, I had wanted to blog more often again this coming year.  Be careful what you ask for, eh?  LOL!
****
First of all--some good news.
Chester is alive and well! 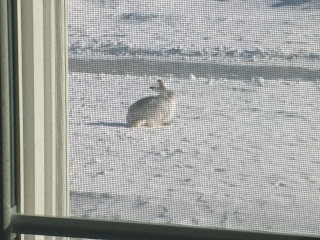 I saw him eating at the patio, but as I was getting my cell phone to take a picture this bag blew in and scared him off a ways.

There is occasionally trash--especially plastic bags--that fly around and around in huge circles outside here.  Karma thinks they are alive and watches them intently.
****
Anyways, I saw Chester on Thursday--tada!
(As usual, I will progress chronologically.)
****
Thursday was the day the ladies had said would be the get-together day at around 1:30pm, right?  And they planned to do some coloring.  So, I had searched out my 15 year old adult coloring books, some colored pencils I don't like (Memories--too hard)... 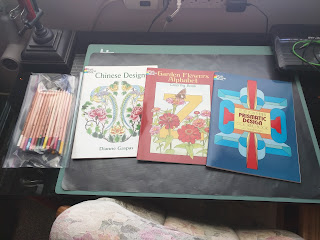 ...and sorted through the old zendala forms I had printed off when I was in that online group years ago.  The lady had large and small versions but I never did do the small ones and finally quit printing those off. 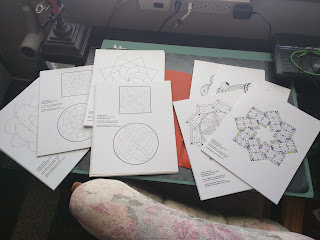 Some of you may remember the zendalas.  They are fun to doodle on.  I prefered to do my own doodles and not use the official zentangles (can find those online, too). 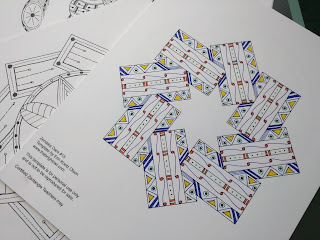 Anyways, I had it all packed up.  Wanted to donate the coloring books, colored pencils, and the stack of zendala forms I won't use.  (I kept the large ones I hadn't done yet.)  But...the Community Room was dark and no one was there.  I waited around for about 20 minutes and went home.  ??
****
If they meant to start next week why didn't they say so?  I had mentioned I couldn't stay long this week because of the frig repairman coming.  Oh well.  I saw a notepad and pen on the table (was supposed to be for ordering in a booklet left on the table)--wrote "Thursday--no one showed up--Rita".
****
This coming week the odds are not good that I will be able to make it as I have the eye doctor appointment on Wednesday and am usually shot for a day or two after any appointments.  We'll see, but it is highly unlikely.
****
Anyways, the repairman came early (they had asked me if that was okay and I had told them it was).  Needed to order a part and will probably be back next week.  They'll call.  Really nice young man.  He was concerned about the temperature--freezer not freezing all the way and frig not cooling very well.  So we are ordering in for Christmas dinner tomorrow.  ;)
****
The Girls are around and come in to eat...as fast as they can now that the big jackrabbits have discovered the food supply--LOL!  They sometimes wait around nearby, as you can see, till the rabbits take off. 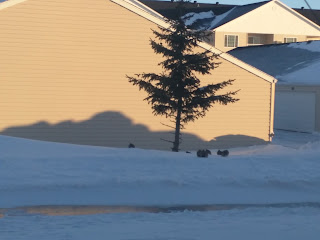 On Friday Chester was back again! 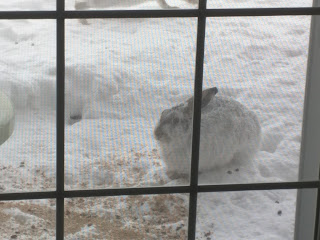 I know you can't tell from this side, but it is Chester. 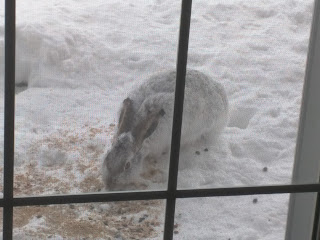 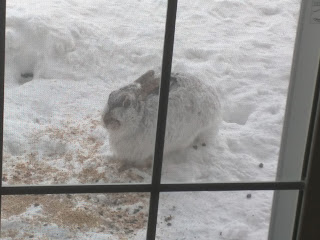 When the rabbits took off...The Girls came in.  Works out okay because the rabbits go for the black oil sunflower seeds first and chew them up whole...but The Girls prefer the small seed. 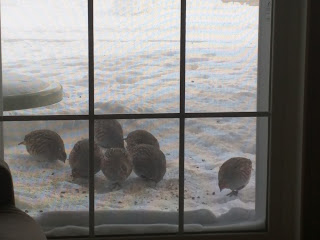 Getting closer to dusk...Chester came back again!!  I got a video.
And as long as I was sitting there watching the rabbits...
****
Here's 52 Stories #2...all about where you were born and grew up.
****
Then the bad news...
Yesterday afternoon Karma was suddenly crying and howling and shaking her head!  Here the skin of her ear was filling up with fluid!  I calmed her down a bit...started to get ready to make a trip to the vets (truth--wasn't even dressed yet) but she retreated under the bed and was quiet.  ??
****
So I hit the web and searched for swollen cat ears.  Immediately found information and pictures.  Apparently this is not uncommon in cats and dogs, but I have never heard of it before...not even in all my years working pet shops.  Karma has an Aural Hematoma.  Could be from scratching too hard but more likely from shaking her head and hitting her ear on something hard. 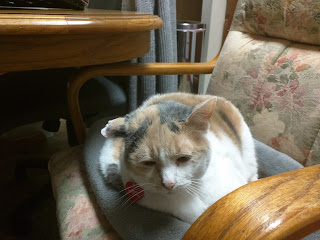 Karma's always been a head shaker.  She rubs her head against--well, everything!  And then shakes her head really hard.  You can hear her ears smack against furniture or the frig or a door frame...wherever.  Seems like I am always asking her--"Doesn't that hurt!!" 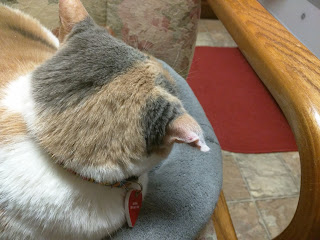 Well, she must have hit it just right.  They said it happens really fast--and it did!  And it must have hurt like hell at the time.  Her ear is all swollen full of fluid and from what I could find online it will heal on its own but it takes a long time--possibly a month--and Miss Karma will have a cauliflower ear like a boxer.  Deformed and crumply.  It probably won't stand up anymore, so she'll have one ear up and one crinkly ear down.
****
If the animal is in pain, they can do surgery to drain it--but then you deal with drainage, scars, and infections.  Plus, they can get these again.  Otherwise, you can let them heal on their own.  The body will absorb the blood and fluid in the ear over time.
****
Karma's been okay since the initial shock. 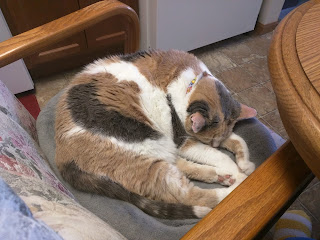 I wish she'd stop shaking her head though. 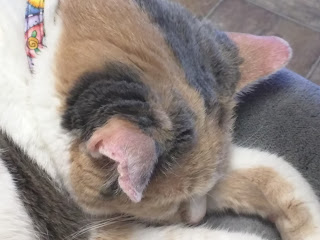 It has to feel weird and lopsided.  She isn't doing it too much, though, because it has to hurt some.  Well--she's not scratching her ears, at least, eh?  LOL!  Karma's been wanting extra attention and cuddles here and there.  Some reassurance that everything is okay.
****
How she managed to NOT do this to herself in her lifetime is an amazing thing to me now that I know about it.  I think of all the ear smacking I have heard over the years--ouch!  I had no idea she could actually break a blood vessel in her ear.  Goodness gracious!
****
So that's what's happening up here in Fargo.  Tomorrow afternoon McFamily will arrive and I promise I am going to try to get video of Ian opening presents this time!!  :):)  Probably see you soon!
****
"Just because you are happy it does not mean that the day is perfect but that you have looked beyond its imperfections."
Bob Marley
Posted by Rita at 2:32 PM

Hope you enjoy your Christmas celebration with McFamily. Sorry to hear that Karma hasn't been feeling well. Hope she is better soon. Good luck with the eye doctor appointment. Stay warm!

I also have never heard of that ear condition, but I've never had a cat that banged their ears against something, or were excessively abusive to their ears. I feel for Karma, and hope she recovers soon. Thanks for sharing this cat information with us because it's something we cat owners need to be cognizant of.

Have fun with McFamily. Ordering in will take a lot of pressure and cleanup off your shoulders, too. Enjoy the day and kiss Karma for me.

I'm so glad that you're feeding the critters, especially since the weather is so brutally cold. I really feel sorry for Chester with the broken leg, but he seems to be doing remarkably well.

Poor Karma! I know a lot about cats, but I've never heard of Aural Hematoma. It sounds painful, but I'm glad she didn't have to go to the vet. I'll remember this, in case any of my cats happen to get it.

I enjoyed the videos and the stories from your childhood.

Well I ma glad Karma is okay! Poor girl...maybe it's kind like when we stub a toe:) Good to see Chester! :)

Hope Karma is better soon. It sounds like you had a nice childhood!!

So sorry to hear Karma is in pain.....poor baby!
Enjoyed listening to you talk about your home and neighborhood.

Oh Karma a sore ear is not fun, I hope it heals nicely and you leave it alone and it doesn't get worse and need a trip to the vet.

I grew up in the suburb my parents still live in about 5-8 minute drive from where I live now, when I was a baby and toddler my parents lived in Blacksmiths which is nearly 20 minutes from here but before I started school my parents moved to Gateshead and I went to the same school Gateshead primary from kindergarten to the end of year 6 then went to Gateshead High school which is now called Hunter Sports High, I was there from year 7 to the end of year 10 when I left school.

My parents lived in 3 different houses in Gateshead and now my youngest daughter lives around the corner from where the house I really remember the most I lived there from the age of 8 to the age of 17.

Poor thing...I'm sure it was uncomfortable for her. Gracie was a head shaker as well. She did have a lot of debris in her ear quite often as they tended to be kind of waxy...eww. I enjoy seeing all your wildlife at the door. Our bunnies don't turn white here...weird. Must be a different breed.

I'm glad Chester is okay. I hope he stays that way.

Bummer that none of the ladies were there for craft.

I hope they sort the fridge for you sooner than later.

Loved the videos! Funny how the jackrabbits chase each other off. Enjoyed hearing your story. I always feel sad when I see wildlife being displaced because of human encroachment.

OH NO!!! Poor Karma! I imagine it would have been quite painful when it actually happened — no wonder she cried out — kinda like an injection of fluid being forced into a tight space. :( I hope her ear heals sooner than later. I feel so bad for her but, sadly, it's a result of the battering she puts her ears through. :(

Have fun with the family. Can't wait to see the video of Ian. :)

Ow! Poor Karma. But such good news about Chester. I had thought by now he'd be gone. And Karma will be an interesting looking old cat, won't she, with one cauliflower ear! :-)

Poor little kitty :( but I'm glad she has Wildlife Live TV to watch outside her very own door. We share an enjoyment of critter-watching, and I always look forward to your updates :)

Glad to hear about Chester. Poor Karma. How awful for her to be in such pain Rita. Maybe she will learn a lesson from all this trauma???? Too bad no one showed up for craft day. Maybe next time. Hope you guys had a great Christmas together!!!

I remember when you were doing the zentangles. You would create such detailed drawings within the different shapes.

Karma's ear does look very painful. I hope it heals quickly for her.