Farewell to 2017.
Greetings and salutations to 2018!
Please, please be a kinder year filled with positive changes for us all.
****
My little corner of the world is touched by kindness and positives but I wish I could spread that energy far and wide.  I haven't been this worried about our country since the Cuban Missile Crisis and the Cold War when we learned how to hide under our desks at school if they dropped the bomb...or all the various protests and riots of the 60s when police shot unarmed students and beat people with clubs...or with Watergate when our president was a crook.  But this year has been much scarier than anything I've lived through before.  Now it's corporations and greed trying to change who we are...lead us down the garden path.  We mustn't let our very foundation crumble.  I still believe in the people of this wonderful country...that you can't push us too far.  That the silent majority is like a sleeping giant...slowly waking up...beginning to roar.  Not just in our country.  This fear, hate, and greed disease is gradually spreading all over the earth...going for positions of power and indoctrinating those without power.  But it never wins in the end.
****
Never has.
****
Never will.
****
You know I usually don't talk about politics on my blog but sitting here on New Year's Eve thinking about this past year...kind of couldn't help mentioning the elephant in the room.  ;)
****
Okay, that over with...
****
On to happier subjects.  :):)
****
Here's Ian helping to decorate the tree.
And remember the picture of Ian buried in the snow?  Leah took a video of his escape.
We can't forget little brother, Liam. 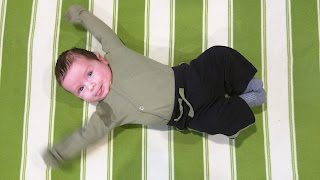 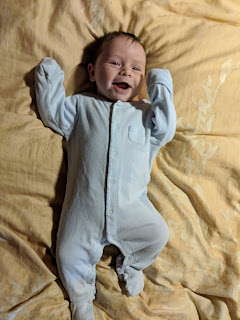 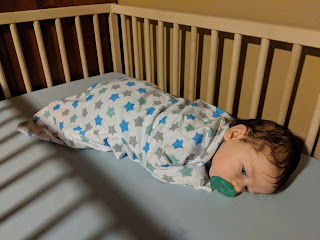 He's turned into such a smiley little guy! 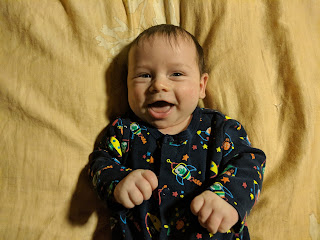 ****
You may recall me showing you the snow-holes left by the grouse.  Well, here they were one morning...tucked in and grateful for the snowbanks. 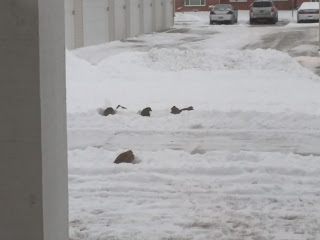 It has been so very cold here for so long now. 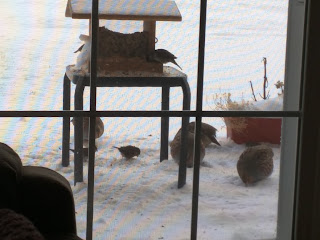 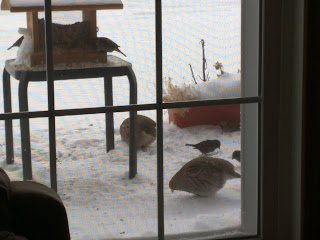 Feeding flocks of sparrows--I think maybe I do have juncos, too--and the two coveys of grouse...well, the jackrabbits have found my patio again, too. 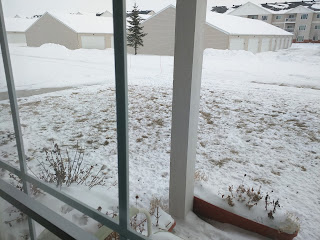 I saw evidence of the jackrabbit parties in the mornings. 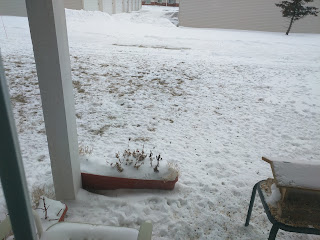 The footprints and tons of poop--LOL! 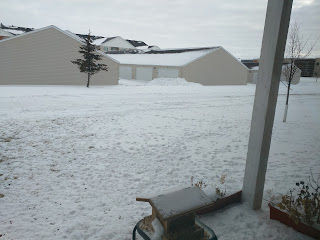 Finally one came early enough at dusk that I caught a glimpse. 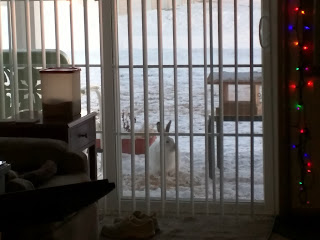 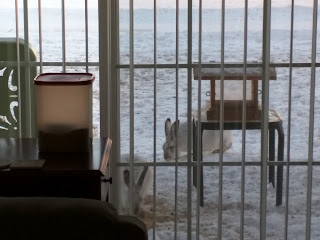 ...but two...and later more but it was too dark to get pictures. 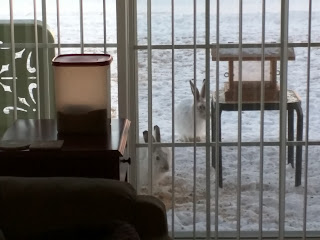 They come every evening now.  In fact I occasionally see them in the afternoon! 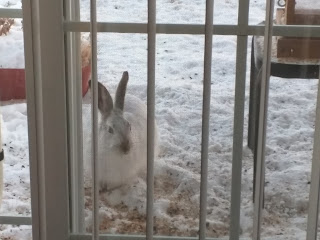 They don't seem to scared of me walking up to the patio door. 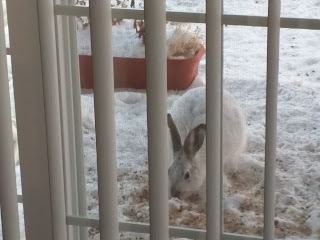 Of course the blinds were pulled but twisted open.
****
We had a hawk attack one day--at least I think so.  Birds hit the glass and scattered frantically.  Something swooped through the patio and was chasing a grouse toward the other apartment complex down between the garages.  I assume it might have been that hawk that was here quite a while back.
****
I don't think it was a successful hunt unless it got a sparrow again--because I have still been able to count a covey of five and a covey of seven--whew! 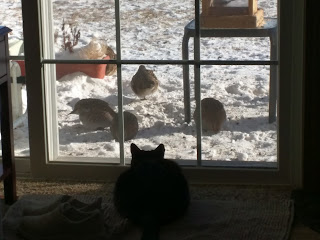 I know the hawks have to eat, too.  I just don't want to watch when I feel like I personally know dinner, you know?
****
It has been below zero for so long with wind chill warnings of 40-50 below that critters are here almost constantly all day long.  This one jackrabbit figured out there was seed up in the feeder--LOL!  Discovered it's much easier to eat right out of the feeder trough than nibble across the ground at scattered seed.  So it parks itself by the table, goes up to grab a mouthful... 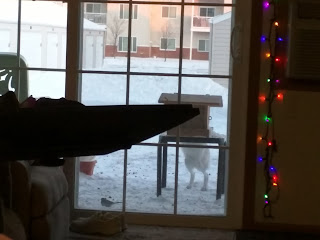 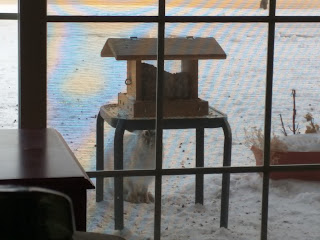 ...then grabs another mouthful.
Up and down. 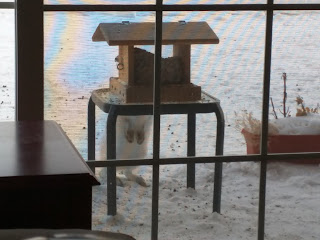 Other jackrabbits have observed this clever soul and have followed suit.  They eat quite a bit of seed during the night.  I am glad to help them out, too.
****
A couple days ago I saw this! 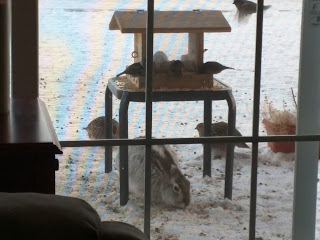 Everyone was here at the same time. 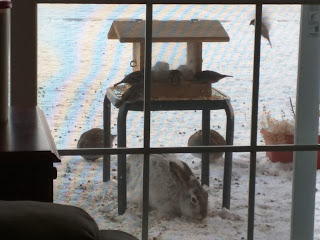 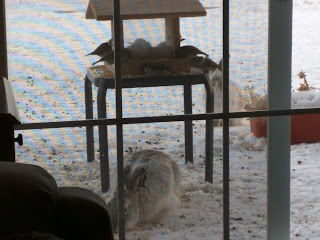 Don't you wish we could all get along as well?  ;) 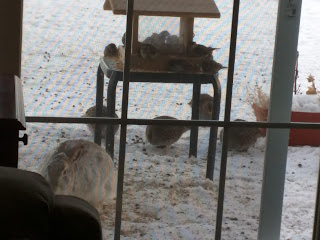 ****
Let's see...after I last wrote I got another of those ocular migraines.  Spent three days not doing any close up work--computer, writing, crafting--with the blinds drawn and sunglasses on the better part of the day.  That's my second migraine...and for a few days after that my eyes were still touchy to the light...maybe still?  The bad headache was gone but if my eyes got flickery I was very careful not to do close-up work of any kind.  Therefore, I am quite behind on letters and Thank You cards--but they'll be coming soon.
****
I called Mary's supervisor at senior companions the Friday before Christmas and told her that I'd like her to let Mary know that I was opting out of the program.  The first thing Sheena said was, "Oh, no connection, then?" and asked me if I wanted to try someone else.  I told her not right now--agreed that there had not been a connection between Mary and I--maybe later on down the road I might try someone else.  (Doubtful, though.)
****
So either Mary had already told Sheena that there was no connection between us or people have said this about Mary before.  Regardless, I was out.
****
Of course, Mary called that following Wednesday to see if it was okay to come over.  I told her I had called Sheena the week before and told her I was opting out.  Mary tells me--"Oh, I had a message from her but I haven't listened to it yet so maybe that was what she wanted."  With a quick goodbye--finally done.  Unless she forgets.  ;)
****
How odd that you wouldn't bother to call your supervisor back.  I am so relieved to be free of the Mary-stress--LOL!
****
Now--confession time.
****
I had seriously been considering quitting blogging indefinitely in 2018.  I actually thought I would be saying goodbye today.  I think with the not really connecting with anyone here (despite going down to events off and on for over two years) and then the recent Mary fiasco...well, I really began to question if I even had anything worthwhile to say anymore.  I think I am most certainly an odd combination of weird and boring...and am either silent or way too chatty when I am finally around people.  Even the fact of being contentedly housebound is weird to most people...and then I talk about having a guardian angel (GA) or my crazy colorful past or grouse and jackrabbits or calligraphy--LOL!  It's no wonder.
****
My health has also taken a dip this past year.  Less energy, more pain.  Doesn't mean it will stay this way forever.  Fibro pain can move around, too. I once had knife pain in my tailbone for 2 1/2 years and it just left...or, shall we say, moved.  Settled into my lower back apparently.  Anyways, pain and brain fog effect the clarity of my focus and I have less to show you that I've made or been playing with.  I hope you haven't been too bored.  I hope I haven't been complaining too much.  (This goes for all my letter writing, too.)
****
I am not bored, though.  But then I can be happy watching grouse.  ;)  And even with the new wonky eye acting up I can close the blinds, wear my new prescription sunglasses, and watch wonderful programs...with Annie in my comfy chair.  (Just tickles me how close we're getting.)
****
But I wasn't sure I had anything to say worth anyone's time anymore.  Thought maybe it was just time for me to quit blogging while I was mostly ahead.  Or maybe already people were sighing when they saw a post from me.  I haven't been blogging very often and so they have been longer.  (For someone with little to say I sure can go on and on!)  The last thing I want to be is a burden to anyone.  I value all the wonderful people I have met online--but I could always just go visit you and leave comments from time to time.  I  didn't have to blog and waste anyone's time.  So I asked GA for a sign.  Was it time for me to stop blogging?
****
Then yesterday I got a comment from a new person who had just found my silly little blog...came over from FarSide's blog.  She said she had started to read back over a few previous blog posts and then decided to go back to the beginning and read.  (We're talking June of 2006.)  She complimented my recording of and writing about my life--that I was a good writer--like FarSide (whom I admire with her daily blogs).  And right now this minute I have probably scared away my newest follower--because I was wiping my eyes as I read her comment and I knew she was my sign.
****
I'm wiping my eyes again right now.
****
And guess what her name is?!
Joy!!!
How perfect is that?
****
So, welcome, Joy!  I am your newest follower, too.  I hope I haven't scared you away.  But whether you stick around, or read all the old posts, or run for the hills...your words were exactly what I needed to hear yesterday.  You were the sign I asked for.  So it's your fault if I am around to bore people some more--ROFL!  Thank you from the bottom of my heart.  Kindness can make such a difference in someone else's life.  Your words are proof of that.  I hope you do decide to stick around.  :)
****
I'm not sure if I will be up to blogging any more often or will be any more interesting--but I will be here in 2018 after all.
****
So--please, please--let's make this that kinder year.  Just a thoughtful gesture or a positive word or a hug can make such a difference to someone else.  I know I am blessed to know each of you.  Happy New Year!!  :) :)
****
“Three things in human life are important: the first is to be kind; the second is to be kind; and the third is to be kind.”
Henry James
Posted by Rita at 2:51 PM