Good afternoon!
Been over two weeks again.  Was busy with Christmas cards and letters--and still feeling about the same so life remains at a very slow pace.  ;)
****
Got some pictures from Leah.  Little Liam has turned into a very smiley little boy. 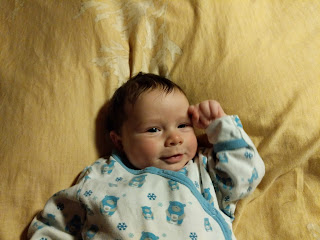 I was over to visit a couple Sundays ago but totally forgot to take pictures.  Gramma just gets lost in these faces and forgets.
****
And what would a three year old do in the snow? 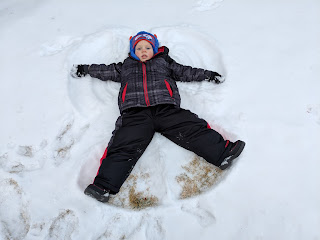 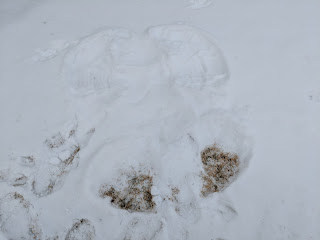 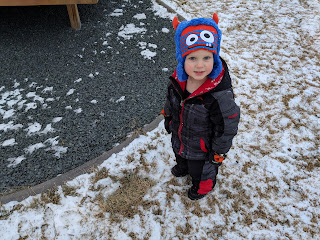 And somehow Ian got buried in the snow--LOL! 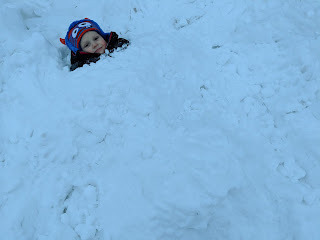 Goodness!  They got a lot more snow than I did and I'm only a mile away.  But it did drift like crazy in the high winds.
****
Two Wednesdays ago Mary (senior companion) did show up.  She had thought she'd told me she wouldn't be here the Wednesday before Thanksgiving...and I had asked her to call and double check before she comes (I have some really bad days where I am not up to company) and she forgot to do that, too.  Mary told me she was a little ditsy and forgetful--LOL!  We did have a nice visit, though.
****
But last Wednesday I cancelled because it was definitely not a good day for company.  So far, tomorrow looks good, though.  I'll know more tomorrow, of course.
****
This last Thursday I finished Christmas cards and got the last of them in the mail.  Was delightful to have them made up ahead of time for once.  Leah and I want to do that all the time now.  No more scrambling to finish them.
Never again!!  ;)
****
Dagan came by after work on Friday and we went over to Wells Fargo to close my checking account--tada!  All switched over to Gate City Bank and very happy about that, too.  :)
****
When Dagan was here he was witness to the fact that I have two flocks of grouse coming here to eat!  Remember how I was concerned that I only had six of them for a couple of weeks?  Well, apparently the one who went off on a "walkabout" was really off to join up with a second flock of grouse--LOL!  The last couple weeks I had been concerned that I would see seven and then five and then seven? 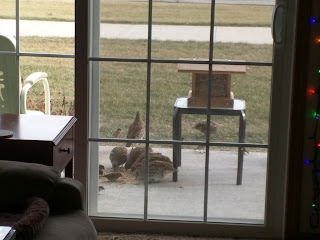 Well, when Dagan was here--we saw both flocks!  One of five on my patio and one of seven across by the garages.  No wonder I am going through so much seed this year--LOL!
****
I have a huge flock of sparrows but also another huge flock of another kind of small birds, too.  Those have lighter bellies and some dark on them, but don't look like the typical chickadees to me.  Not sure--but they're cute and I am happy to help them all out. 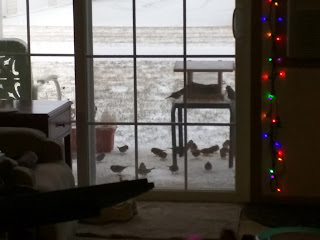 Annie continues to scare off the small birds. 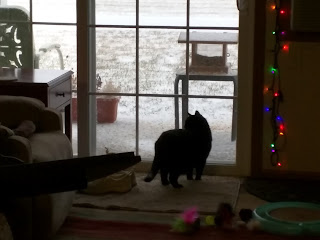 You can tell she has probably eaten a few of these in her younger days living on the street. 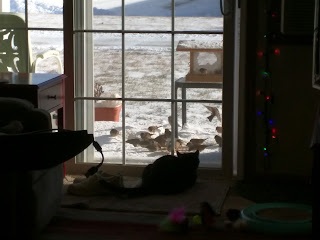 Oh, and that winter storm...the wind was a bit horizontal.  Enough to leave a lot of snow inside the bird feeder--LOL!  There's maybe an inch leeway up underneath the roof of the feeder...that is how horizontal we're talking. 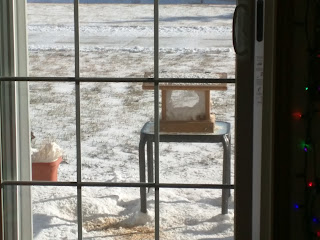 Besides the usual daily stuff I am now working on the lower case alphabet... 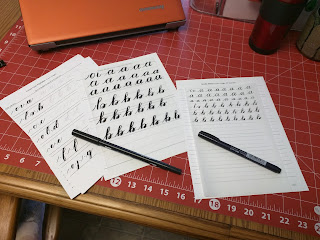 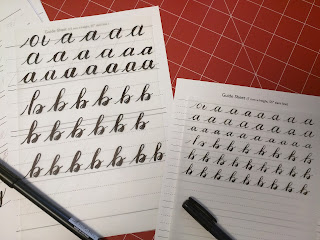 Annie and I watch the bird parties. 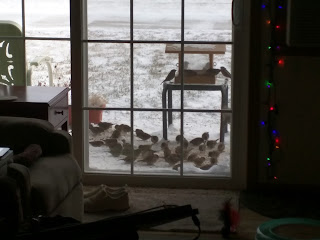 She still never lunges at the grouse--a little too large for her, I think. 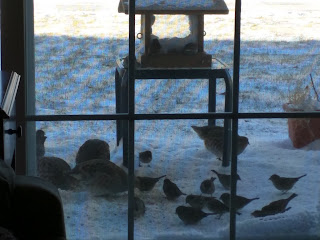 But Annie has dreams.
This is what I wrote under this video on youtube:
Annie dreams of catching those birds on the patio that are so close but just out of reach. Maybe even tackling one of the big grouse. She also does just plain snore and has terribly potent, lingering farts, but one must take the bad with the good with those you care about. She is becoming a wonderful companion.
****
So that's it from here.
Until next time...
****
"Laughter is the shortest distance between two people."
Victor Borge
Posted by Rita at 4:48 PM

I got your card AND your belated birthday card, Rita. Thank you so much for the lovely and delightful things you make. I simply LOVE your handwriting. :-)

OMG Rita that video of Annie was too too funny...lol still smiling. Thank you so much for the Christmas card.. I just love it! So nice to see those birds on your porch..

We've managed to keep the raccoon away and squirrels and now its a battle with the crows... lol Dont get me wrong i like crows but they are little pigs... I just try to keep them on the ground and off the feeder... I throw some food on the ground for them and the crusts of my bread go to them.. Big hugs girlfriend! deb

Those kids are just adorable. Liam has a gorgeous smile. Nothing better than a smiling baby. And Ian sure looks like he is enjoying the snow. Can't say I blame him. Loving your lettering too Rita. I could never do that so I am very very impressed with how they are all the same size. :) Hope you have some good days. Hugs-Erika

Please send my compliments to the maker of the snow angel. An excellent example, and it may be as close as I ever get to one since snow here is rarer every year. Thank him for me :)

I enlarged your birds to see if I could identify the mystery birds and couldn't.

Your calligraphy is impressive. Practice really does make perfect :) I also continue to be impressed by how comfortable your cat is and how well she's making her home with you.

Both grandchildren are looking happy and seen ti be growing like weeds, too. LOVED what you wrote about Annie. Boy can I relate that to Bleubeard, but fortunately NOT to Squiggles.

No snow just highs in the high 60s F here. Setting record highs, too. Saw that you got hit with it, though.

I also got your card, Rita. Thanks, it's very nice. Have yet to work on mine.

Your grandsons are such lovely boys both and you did a fantastic job on getting all the mail done already!
Take good care of you - Annie is such a cutie meanwhile - what a lovely dream she must have had...lol!
You are good to animals and they know that - especially the grouse love you ---
Love to see this much snow - ours is gone again - but good-
I am not so keen on snow at all.

Have a great time before Christmas Rita!
oxo Susi

After weeks of doing Christmas cards and letters every day I am at last just about finished with only 3 left to do.

Leo has only 2 days of school left for the year.

Your Grand boys are growing up so fast! Annie is settled in so nicely now! I hope your visit with Mary goes well today! IF she shows up! :)

I was watching the video of Annie sleeping with my cat Scratch nearby, who also happened to be sleeping. When Scratch heard the sounds that Annie was making, she started to make the exact same sounds in her sleep!! It was amazing!

The snow photos are cute - especially the snow angel. I admittedly have never made a snow angel in my entire life. Perhaps I should try to make one the next time it snows....
...except that I'd probably have a hard time getting back up. I'd better bring my cell phone in case I have to call 911.

Loved Annie's ear twitching & your two handsome grandbabies!! Thank you for your card!!

Liam is adorable. What a fun Christmas for all of you with a new member of the family. Enjoy!

Liam is so sweet, and Ian making snow angels. And the video of Annie snoring! We have a cat that does that. He used to have smelly farts too but I haven't noticed that lately. He's the one who comes in the house every day.

Aww - sweet shots of the grandkids!

Gosh, love the crowd at that feeder!!!

maybe those other little birds are junkos - we called them snow birds because that when you see them...but you have snow all the time...which made me think of you today as we have our 2nd snow of the year (!!!! already ~~~). Your calligraphy is *amazing* - gorgeous work! You are one of those folks who is good at whatever they do!

Sorry I'm so late visiting :( I've been having many bad days too and just can't keep up with things right now. My back has been acting up big time too and I'm seriously considering a surgical consult at least. Because in May I get new GRANDBABIES!!!! Yes the plural as in TWINS ♥♥♥ A boy and a girl. We haven't had a baby in the family for 11 years so this will be lots of fun!!!! Can't have a nasty ole back keeping me down if I can get it fixed ! I got your Christmas card and loved it. I didn't do cards this year but I do promise to write a letter as soon as all of this craziness of the HOLIDAYS is over.
Carol

Awwww....Liam is so cute just as his big brother was making snow angels.

I'm glad you had a nice visit with Mary.

YAY for finishing the Christmas cards! I can definitely see why making them up ahead of time takes a load off.

So you're completely done with Wells Fargo now? Great!

Love seeing all your feathered visitors.

Your lower cases are looking good! I'm up to the n's for today. Must take some pics to send you or maybe I will do a blog post.

Loved the video of Annie at the end...so sweet! While he doesn't snore, sometimes, Jack makes sounds in his sleep like he is reliving an event and we wonder what he is dreaming of.

I am beyond thrilled that Annie is becoming such a wonderful companion for you. She seems so sweet...except for stinky farts. hehe

Have a lovely weekend! xo

Snow angels are so fun! I remember making them as a child and then watching the girls make them when they were younger. We would decorate them with birdseed also to see who would visit the snow angel.

I can't believe the number of birds - as well as the variety of birds - that you get at your feeder. Annie must be enjoying each day watching all the activity there!

Your lettering is beautiful and so precise.

I went back on some of your posts about your bullet journal. Am going to start one this year. Thank you for posting the photos and giving insight into how to set one up. It was very helpful.

Oh Rita _ it did make me laugh when you found you were feeding two sets of grouse!!! Of course seeing you two beautiful boys made me smile - I know what you mean about forgetting to take photos! Off to read your latest post now! Chrisx