Goodness sakes!  I am slower than molasses in January today.  Well, I have a few pictures and I'll try to make this quick.  ;)
****
Annie got to try out cat grass for the first time.  In order for her to know this was hers and okay to chew on vs. the house plants, I first put it in the pantry near her food and water dishes.
****
Is this for me? 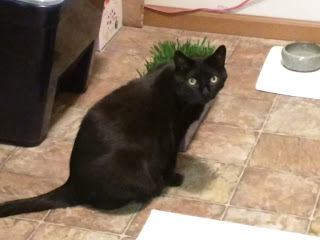 I encouraged her and she proceeded to investigate.  Annie decided she likes cat grass...and she's not as messy as Miss Karma was, who pulled them out by the roots and left dirt clods all over the place--LOL! 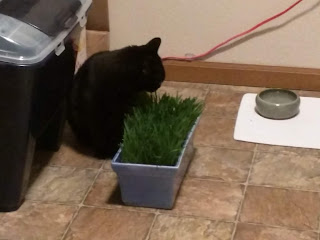 After Annie had the grass in the pantry overnight I moved it over by the patio door so it could get some light.
****
Is this still for me? 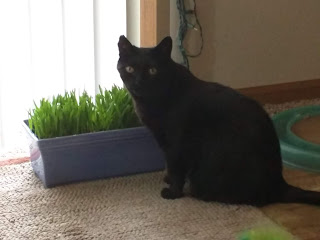 Go ahead, I said.  It's all yours.
Annie chowed down. 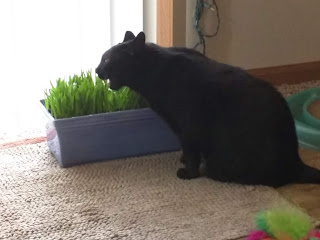 She's over there off and on all day.  :)
****
We've had AC weather here--hot and muggy.
Lots of birds!  Half of them are fledglings begging for food while they are standing right over the seeds--LOL!  They are such a hoot! 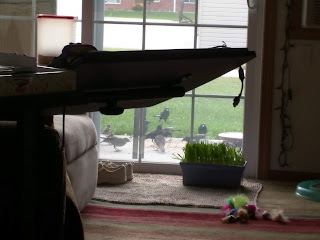 If there is sun in the mornings Annie spends them sprawled in the rays...but keeps an eye out for the flocks of birds coming and going. 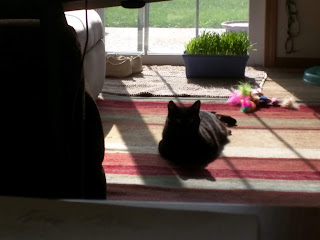 Occasionally I see one of my little buddies--the thirteen striped ground squirrels! 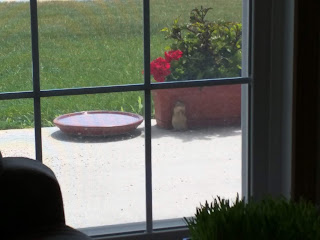 On Wednesday I saw a bird I have never seen before!  Even Annie seemed to take special notice.  Had to google it to find out what it was--a yellow-headed blackbird!  Both Annie and I kept a lookout.  It was here a couple of times but gone before I could get a picture. 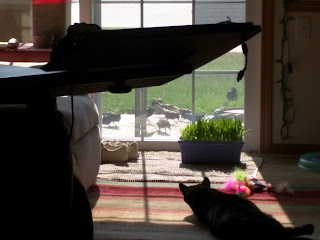 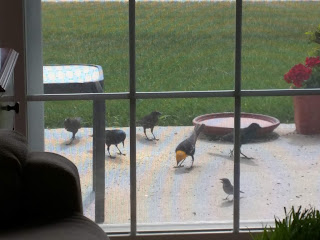 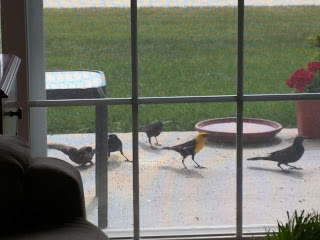 I couldn't believe I grew up watching red-winged blackbirds but never saw a yellow-headed blackbird in all my 67 years.
****
By Friday the word had spread.  I was just tickled to see four of them out there pecking away!!!  One took off before I got these pictures. 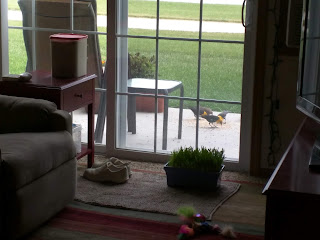 You can click on the photo and enlarge it to see them better. 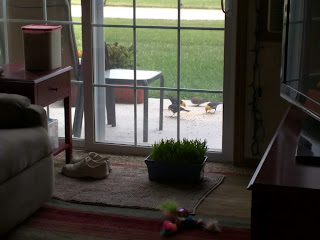 I really can't get much closer to the patio door or they fly away.  But I am just thrilled that they have been coming by almost every day now--whoohoo!
****
Occasionally little birds land on the air conditioner and hop about.  Annie will run, park herself at attention underneath, and stare at the AC.  She wants to be fully prepared should one find its way into our apartment. 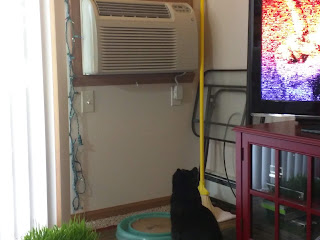 Can you see the ground squirrel out there filling its pouches alongside the grackles? 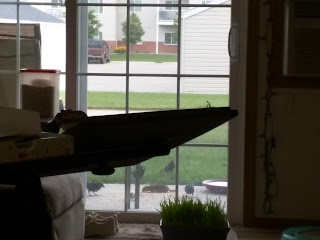 I love that they are all out there together.
****
Well, I had the most fun yesterday!  So much so that I forgot to take any pictures, of course--LOL!  Dagan called and asked if I was up for a Gramma Day as Ian had asked for one.  Of course!  (And Ian didn't even know he was going to be opening birthday presents.)  So I had an unexpected Gramma Day from about 2-8:30pm!  Yup--because he was being so good and wanted to stay Mama and Daddy let him stay up later than usual.
****
First he got to open all his presents before Mama, Daddy and Liam left.  This year it was all about art.  He got watercolors, watercolor brushes, markers, finger paints & paper and foam do-dads to use as stamps in the finger paints.  Lots of stuff to keep at my place for Gramma Days.  ;)
****
Ian tried out his new watercolors, brushes, and smock.  He painted on a piece of real watercolor paper for so long making a picture for Mama and Daddy--also showed him how to mix colors to make new colors--that he said he was ready for a snack break and wanted to watch something on TV while he had his snack.  We had watched some Simon's Cat cartoon videos last time (YouTube) and he mentioned those.  But I said this time we will watch real cats--so we cuddled up on the chair to watch some Maru and Hanna YouTube videos.  He LOVED these, too, and wanted to watch one after the other.  Next thing Daddy was calling at 6pm to see how we were doing.
****
Dagan was giving us options.  He could pick us up some dinner to have together before he took Ian home, bring me something and just pick up Ian if I was tired, or pick us both up and I could eat over there with them (too tired)...but Ian wanted to stay here and eat  dinner--by ourselves--just with Gramma.  I told him I only had some leftover goulash and brussels sprouts (Ian had never had either of those) but Ian said he wanted to try them.  Dagan said Ian could stay extra late as long as he was being good.
****
The brussels sprouts with a little lemon on them came right back out on to the plate--LOL!  Ian told me, I don't like lemon.  But he loved the goulash and even asked for more.  We cleaned up and Ian asked for Mr. Rogers.  (Ian is a big Mr. Rogers fan.)  I am enjoying seeing the programs again after 40 years.  Dagan also loved Mr. Rogers when he was little.  ;)
****
After two Mr. Rogers shows it was around 8pm...so I told Ian we could go make my bed (I'd washed clothes, too, on Sunday) so that Gramma was ready for bed, too.  Ian has a sound machine, so I showed him mine.  We listened to all 20 sounds and talked about foghorns and lighthouses.  He was curious about all my crystals, so I let him hold each one...and told him the story of how I found the huge geode when it was full of dirt.  That is how Dagan found us...on my bed holding crystals and rocks and listening to wind chimes--ROFL!  Yup--that's the kind of things you can do at Gramma's.  :)
****
Ian went off holding his painting up to his chest so Daddy couldn't see because he wanted to surprise them with his art present when he got home.  :)
****
This is what happens when I forget to take pictures...I have to try and draw them for you with words.  Anyways, that is why I am moving slowly--but contentedly--today.
****
Tomorrow Caroline will be bringing my groceries.  Annie is conked out next to me at the table here on her chair.  Ian's visits--well visits from anyone--equal a long stressful time hiding under the bed for Annie.  And then Ian and I spent the last half hour IN the bedroom, we made the bed, and then sat right ON TOP of the bed--heaven forbid!  Annie is exhausted--LOL!  She wanted lots of attention last night when we were finally alone.  ;)  I have definitely become Annie's favorite human.
****
Have a peaceful week!
Catch you next Monday!  :):)
****
"And we are put on earth a little space, that we may learn to bear the beams of love."
William Blake
Posted by Rita at 8:22 PM