Good Morning!
Another Monday is here already.  Today looks a lot like this picture but with a few less clouds. 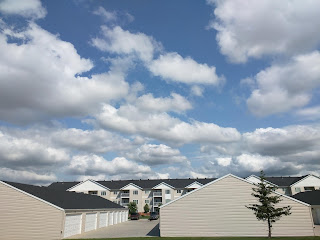 Supposed to be in the 80s all week--or 30s for you with Celsius.  Thank goodness for air conditioning!  We even had a heat warning out Saturday (which was Gramma Day).  Air felt thick enough to cut with a knife--and Dagan and Leah were helping Amber move into her apartment--whew!
****
Here was the whole family out in the lake over the 4th of July weekend. 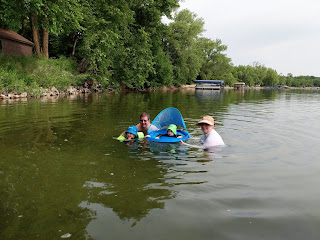 Leah freckles and burns so easily that she has to stay covered up pretty much.  Both Ian and Liam have her skin--especially Liam--so sun screen and sunhats are always around for the boys.  Looks like they had a great time!
****
You would probably have to enlarge the pictures to see this bird in the center. 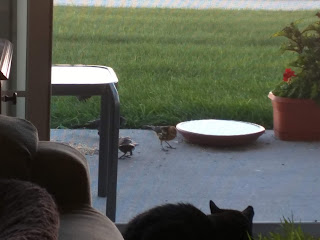 I kept trying to get a good picture of one of what--according to google--could be either females... 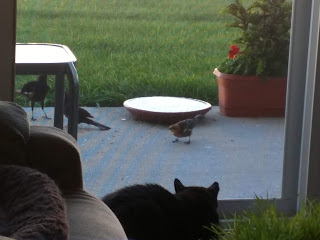 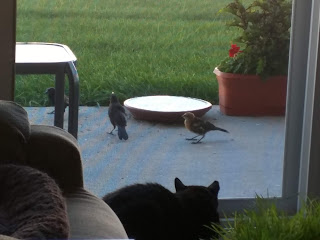 I think they are young ones because they have that slightly scruffy look to them...but they are smaller?  Some have more yellow on their heads than others (young males?) and they seem to have some white on their wings.  But the adults do not feed them and they don't beg for food like the baby grackles and sparrows.  Maybe yellow-headed blackbirds parents are more of the tough love variety?  LOL!  Or possibly they are another type of bird altogether?
****
Anyways, a couple people asked if I'd show pictures of my crystals and rocks in the bedroom.  I don't even know the names of all of them anymore.  The two real stone spheres--a crystal--and a labradorite. 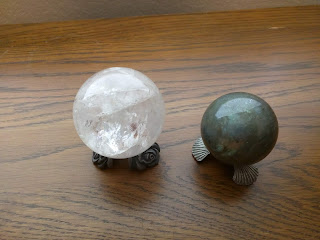 The labradorite is rather magical with the parts that glow inside as you rotate it.  Ian thought that one was pretty exciting.
****
This isn't real--but it is pretty cool!
It's man-made glass.  A red crystal ball! 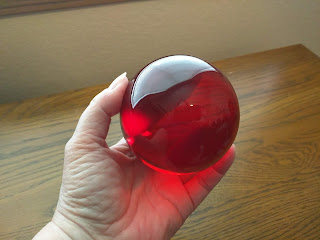 No, I do not scry--balls or mirrors or any such scrying devices--LOL!  I just thought it was super cool!  You know how I like red.
****
These are a couple rock larger crystal clusters--one is dirty tannish and the other blue and white, but don't know the proper names anymore.  And then there's the huge, white geode!  Very heavy, but Ian was still able to lift it.  (He's a strong young man!) 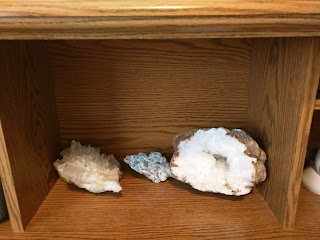 That beautiful geode mysteriously appeared face down outside the run-down duplex where I lived in Rogers, Minnesota back in the 90s.  It just looked like a huge bumpy rock--sitting right in the barren corner where the driveway met the front sidewalk.  There had been nothing but bare dirt there since I had moved in but it probably had been a flowerbed at one time in the past.  I took note of the huge rock that had never been there before, but kept walking.
****
But it nagged at me for no good reason--I thought.  (Honestly, this is how GA, my guardian angel--or spirit guide or whatever you want to label him--and I communicate a lot of the time.)  Couldn't get that dumb rock out of my head so I finally went back out and looked at the mystery rock.  I flipped it over--was caked thick with mud--but there was a spot that glistened in the sun.  I rubbed--more sparkles.  So I rubbed off all I could and then brought it in to clean it properly--and wow!  Gave me goose bumps!!
****
I asked the boys who lived downstairs if they had brought the rock to the front yard or if they had ever seen it before.  Nope--what rock--they hadn't seen a big rock in the dirt.  (They were the kind of boys who would have noticed...and would have smashed something with said rock.)
****
So this gorgeous geode was a gift from the universe.  :)  I treasure it.
****
These rocks are up on a shelf in the headboard.  I took them down so I could get a picture you can see.  The crystal wand was a gift from my friend, Lynnette, many years ago.  The brown rock was a gift from an online friend, Spruce.  It's from Labrador, Canada and is 3.95 billion years old!!  You can google "ancient rocks in Labrador"--fascinating!  They have found the oldest rocks on earth up there--before any life was even on earth.  Can you imagine?!  It truly feels ancient in your hands.  That rock is really precious to me. 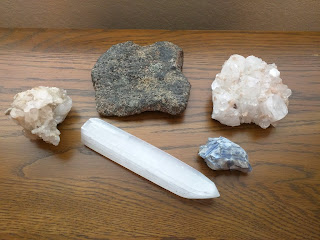 And then three more crystal clusters--another blue and white one.  I can't remember what either of my blue and white ones are--kyanite, sodalite?  Most everything I have purchased is here with me because I could/can feel the energy from it when I hold it in my hands.  Even the red crystal ball--they had a less expensive, smaller red one and this big one.  I was hoping the smaller one would be the one--but nothing.  Held the big red one and it almost vibrated in my hands.  So, it came home with me.  That's how I roll.  Yes, Ian has an "interesting" grandma--LOL!
****
One thing different I did this week was get out the canned air and blow the dust off this old Underwood typewriter and hoist it out to the kitchen table. 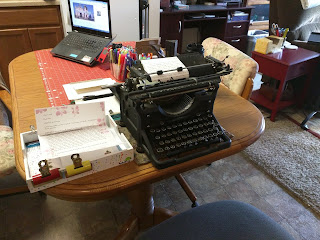 I bought this years ago on ebay because it looked like the one I learned to type on in the early 60s down in the basement.  Leah and I found a retired guy in Fargo who fixed and cleaned typewriters out of his garage.  At the time I wanted to know it really worked and get a ribbon for it.  But they are a bear to actually type on--LOL! 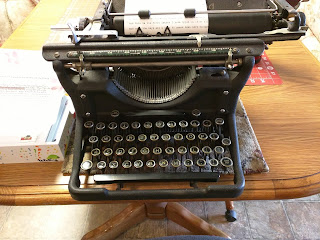 I recently watched this documentary called California Typewriter on Netflix...and that motivated me to at least type a letter or two on it, right?  Well, one.  Not easy to do with my bum arm and weak wrists these days--hehe!  But it was really fun!!! 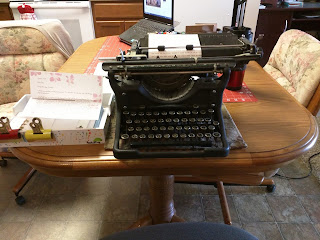 No bell, though.  I can't remember if that was the case when I bought it or not.  I love the sound of the keys smacking the paper and the carriage being slid back and clicked up...but I do miss the bell.  I shall have to type another letter one of these days for sure.
****
I had Ian all day on Saturday--we're talking from about 9:45am till 9:45pm.  :)  I did remember to make a video at the end of the day.  It was past Ian's bedtime.  We did find the video on youtube where Mr. Rogers visited Sesame Street, BTW.  ;)
Three hours finger painting! 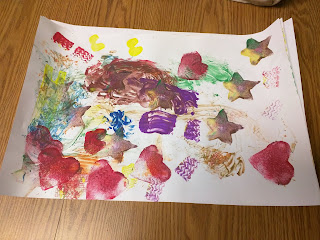 We went through everything in the kit I bought him--foam stamp shapes and rollers, weird rubber shapes on sticks... 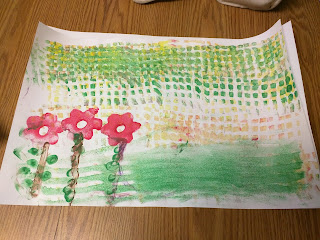 ...and he used his fingers, of course. 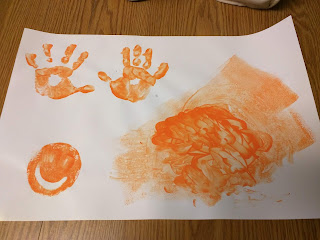 He wanted to do his hand prints--and really got into orange at the end of the long session.  :)
****
We had a wonderful day!  I am still in rest and recovery mode--LOL!
****
But I have started to do some daily brush lettering drills again.  These were fun to do with a set of colored brush markers. 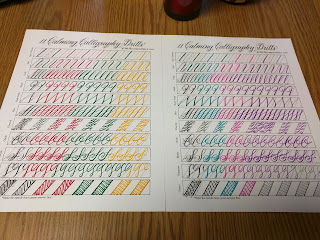 ****
Well, that's about it from here for the week.  Another hot week ahead.  I should take some more pictures and show you how great the flowers are doing.  Ian watered them on Saturday and he wanted to put out the bird seed on the patio, too, all by himself.  We did that right after breakfast before it got any worse out there--LOL!
****
I will leave you with another evening shot.  I love how the sunset reflects on the apartment building across the way. 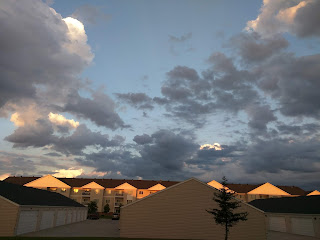