Good Day!
At this very moment not really morning or afternoon--LOL!
Hello!  Hello!
****
Had clouds that drew me out to take a view from left... 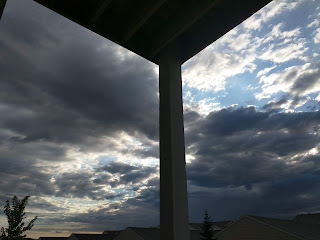 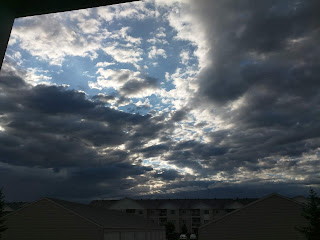 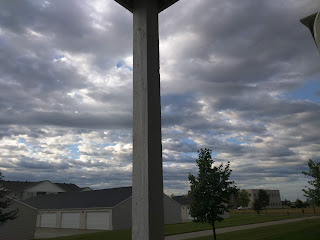 The two kinds of coleus have taken over half the planter boxes this year.  Also from left... 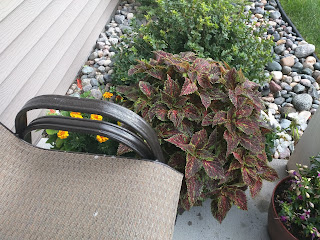 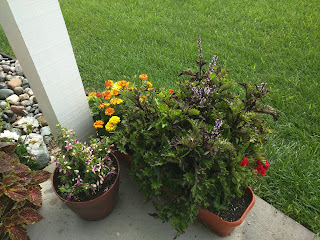 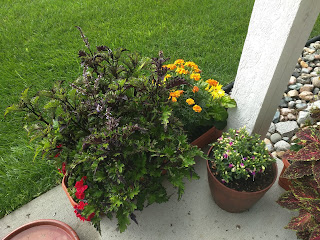 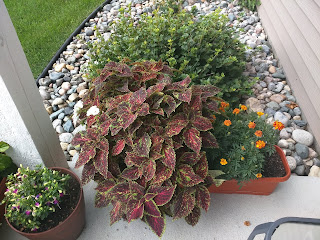 They are kind of like my own little hedge--LOL! 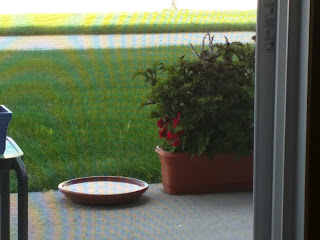 The ones in the front planters have been flowering for a long time.  I have not wanted to trim them back because the bees love them!  Those big bumblebees must come from some distance to find my coleus so I do not want to deny the bees.  :)  Makes me happy to see them here...even if I am scared of bees (and wasps).
****
I made some soup last Tuesday--with pasta. 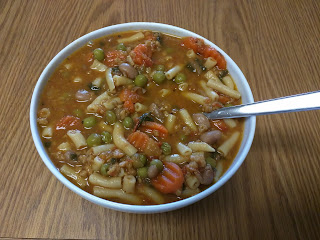 More the consistency of a stew really.  The temperature dropped into the 70s and it felt so cool that I was back to making soup--LOL!
****
We had our Goldmark "Meet and Greet" meeting on Wednesday at 9am.  (More the time this night owl might  normally be waking up or still be sawing logs.)  There were at least half a dozen smiling Goldmark people here.  They put out huge boxes of assorted rolls and doughnuts on each table with wads of paper napkins.  They came around with pre-made coffee in containers I've never seen before--kind of like milk cartons--and disposable coffee cups.  (I have my own red thermal cup and am trying to avoid sweets so I didn't partake.)
****
They handed out these sheets. 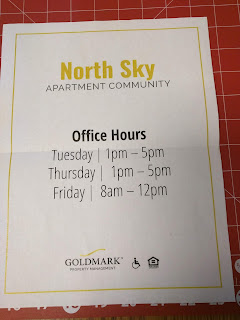 We did get the new office phone number in the letter we were mailed, but you'd think they might have included the number on here--LOL!  We've gone from a full time office manager to the office being open three half-days.  That was all the information we got at that time.  They said that as the meeting progressed and they heard our questions they would send around information accordingly.  After an hour meeting full of questions...we got this outside our doors: 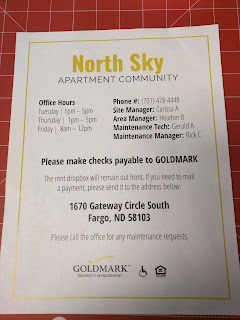 ROFL!!  Basically the names of the people we have to ask for when we call our one office phone number--and where to either drop or mail rent checks.  LOL!
****
We are supposed to get a new activity director but they had no information on that at all yet.  They were all very nice and sympathetically listening to all the questions and concerns of the residents.  One lady said towards the end of the meeting that she has rented with Goldmark before and "they are wonderful"!  First person I've heard to say anything nice about them, so that was hopeful.
****
On another positive note!  At the meeting several people complained about the weeds and thistles growing in the rock beds around the apartment and two men came around last week and pulled up weeds!  Now I don't know if they were from federal housing or from Goldmark because Goldmark isn't supposed to take over until the first of August but I had thistles and a three mystery weeds that were almost 2 feet high and now they are gone!  Looks much better out there--whoever is responsible.
****
Think positive, right?
****
Friday was a super busy day for me.  I had Ian for Gramma Day all afternoon.  Tickles me that he is still excited by trips to the dumpster and to the garage for more bird seed.  He pushed the cart there and back--filled the bird seed container so carefully he didn't spill a seed--and also filled a smaller planter with dirt for growing some more cat grass.  We took a break (Gramma's knee) and watched some Maru and Hanna...and then some of my own videos from YouTube--of Ian, Liam, Karma, my old apartment, and this one empty when we were first looking at it.  Ian found them interesting and a little disturbing, I think--that he didn't remember Karma or my old apartment--or that he was a baby and toddler and didn't remember that.
****
Then we went out and picked/cut dead heads, jet sprayed the patio, and watered the plants.  By the time we were done Ian's pants and sandals were soaked--LOL!  So Daddy had to bring along dry shorts and underwear when he picked us up.  Yes--"us".  I went over for dinner (Chinese!) and to spend some time with everybody.  Liam is taking those first unsteady steps between Mama and Daddy--giggling and laughing all the way.  I read Ian his bedtime story downstairs this time (knee).  Then after the kids were in bed Leah gave me a ride home and came in till 10:30pm.  We didn't actually do any crafts but she helped me with some One Drive issues and we just had time to gab.
****
Wonderful day!
****
Of course, Saturday was rest and recovery...but yesterday I did laundry, got the bullet ready for August, cleared off both the tables in the studio, and was blasted again by the jets flying overheard from the Fargo Air Show.  Annie hid under the bed.
****
McFamily was at the Air Show on Sunday.  I had a brief downpour of rain and hail here.  They had rain but no hail at the show.  I don't know how to get pictures off Google+ and on to the blog, but Leah did send me some picks and quick videos of the Air Show.  Maybe next time, but don't hold your breath.  We've been having sharing issues with One Drive, too.  I still haven't seen Ian's birthday video from here at my place--LOL!  We'll figure it out--maybe.  ;)
****
Those of you who have been with me for a while know that I rearranged the two tables in the studio a while back.  It helped some--for sewing--but for some reason (mostly because it is cramped in there) it has never been a very usable room.  Those tables end up being a catch all because of that.  We've never even gone back and really tried to organize the bookcases, etc, since I moved in.  Chaos.  I have a difficult time finding items I'm looking for sometimes--especially now that my memory isn't what it used to be dealing with about 15 years of fibro fog--LOL!
****
Before pictures. 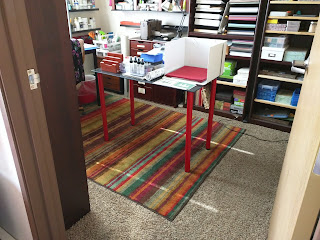 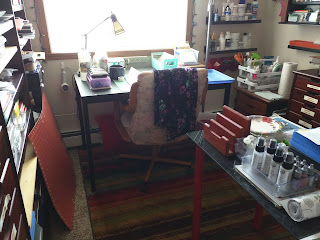 Even switching the larger table to under the window--well, it was better, but there's still not a lot of room to move around in there.  Awkward. 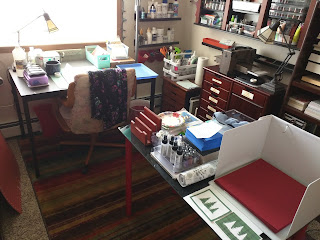 ****
AN ASIDE:.
While I was taking the before pictures I watched this car drive in and turn around by driving right on the grass!  Not just a U-turn but they pulled way up on to the grass and then backed up--on the grass--a couple of times to turn around and face the other way. 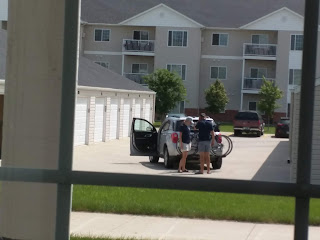 He's special, I guess.
****
The guy then backed his red car out of their/his garage.  (Surprised he didn't back that out on the lawn, too.) 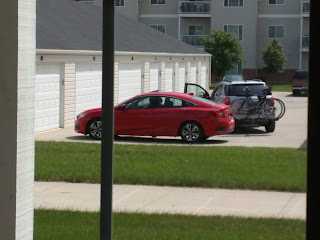 They were awfully cuddly for a married couple, to be honest.  Maybe he was showing off for the girlfriend?  By driving all over the lawn?!  Was she impressed?  She didn't appear bothered by the behavior?  Who knows--but I had camera in hand and there you go.  I am still shocked by some things people do for no reason.
****
Anyways, back at the ranch...
I cleared off the tables. 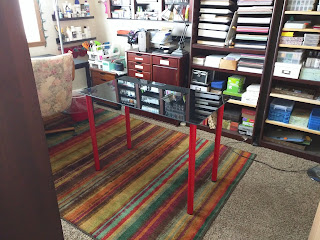 (Not sure I'll ever find half that stuff again that got shoved into any empty spots I could find until I reorganize in there--LOL!) 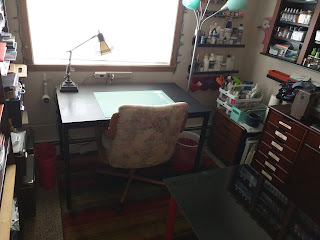 Then I turned the smaller table as per Leah's brilliant suggestion. 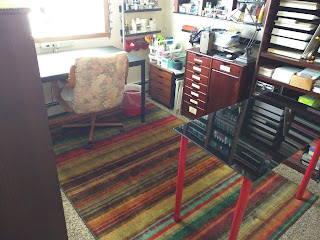 Yes!  I think this might work the best!
****
THE PLAN:
Dagan and Leah ordered some furniture from Ikea and I asked them to order me a couple more chair mats for the studio, too.  Thinking that if the chairs could move around easier maybe it wouldn't feel so cramped, right?  And that idea has progressed to hopefully butting up the two mats and having one table on one end and the other table on the other end.  Maybe be able to roll back and forth between them?  One of the chairs broke a while back, as you may recall, so there's only one in there right now, anyways.
****
Dagan is supposed to bring over the chair mats and help me get them down under the tables after work today.  I am excited!  I have needed to find a way to be able to do more.  This has not exactly been a productive year so far with being sick so long, the bad flare that doesn't want to let go, and now the darn knee--LOL!  So I wanted to be able to set things up in there so that I can leave everything out that I'm working on.  That way I can do my "baby steps" and work on projects a little at a time.  Whoohoo!!  I am hopeful that this will make that room finally more usable and less just a storage area.
****
My first project is to set up the sewing machine for some quick clothing repairs. But after that to set everything up to work on our Christmas cards!!  :) :)  We want to make more than one set of Christmas cards.  I need some more sets of Birthday cards.  I am completely out of bookcards.  I have a box of scrap cards all organized and ready to construct.  There are saved cards from other people to recycle.  I need lots of plain cards, thank you cards...so many cards.
****
Wish me luck!  :) :)
****
The mowers are here.  They come on Mondays.  Annie is sleeping in the chair next to me at the kitchen table.  It's in the 80s, the AC is humming, fans are blowing the cool air down the hallway & into my bedroom, mourning doves are walking about on the patio now that the mower went around the side of the building, thinking about lunch and hobbling down to check my mail.  May it be a great week!!  :):)
****
"At some point in life, the world's beauty becomes enough."
Toni Morrison
Posted by Rita at 2:10 PM