On one of our 90 degree days a mourning dove just sat in the water dish for about 15 minutes.  One of the few birds I have seen this week. 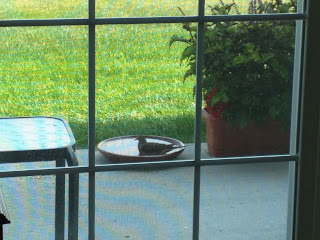 Been quite the mystery here as to what happened to the birds and what is happening to my plants?  The marigolds in this planter began turning brown and dying a little over a week ago. 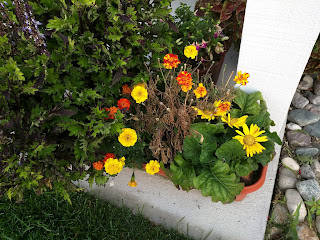 And other than a few sparrows, one sickly looking grackle, and a couple of mourning doves--all the birds have disappeared.  No flocks at all.  I used to put out a couple big tin cups of seed once or twice a day.  Now I can put out less than half a cup and there will be seed left the following day.  ???
****
At first I thought the hawk had been here because that will keep them away for a day or two, but this has been more like ten days now.  No bees, either.  The only thing I can think of is that when they pulled the weeds around the building that maybe they also used some kind of toxic weed killer.  If they happened to hit those marigolds on that corner that could explain why only one batch is turning brown.
****
But all the plants seemed stressed.  I'm losing marigolds almost a dozen a day.  The geraniums have almost quit blooming and even the huge coleus are a bit limper than they were.  It's been very hot, but I have been watering every day...and the heat used to bring the birds here in droves for an easy meal, a drink, and cooling bath.  ??
****
Disconcerting.
****
I miss them.
****
Annie misses them.
****
Anyways, I have been slowly plugging away in the studio. 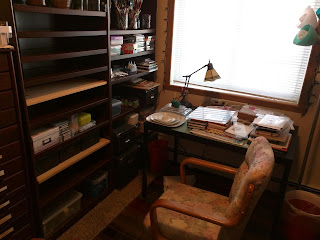 As most of you know, it gets worse before it gets better. 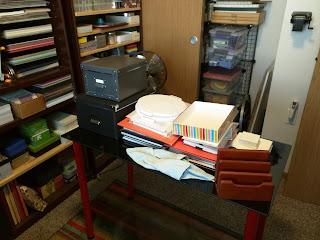 ****
I had Ian here for Gramma Day on Friday.  We changed another big round light bulb in the bathroom and filled the hand soap container...after his two hour lunch.  (He was a dawdler to say the least.)
****
After lunch and tasks we had to check in with Maru and Hanna on YouTube, of course, and then were watching a video on gelli printing.  Ian had a new camera and told me he wanted to take pictures of art...just art.
****
While cleaning in the studio I had just run across a stack of gelli printing papers that Leah, Dagan, and I practice-played with years ago--oh, and some pages taken out of an old art journal.  I gave them to Ian and he laid them all out on the floor and took pictures of "art". 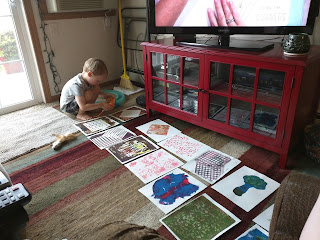 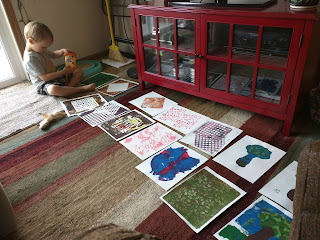 ...until the battery died on his camera. 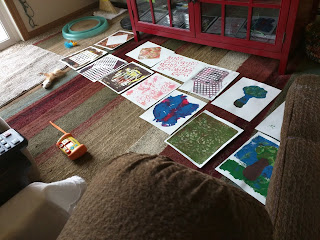 Now I can throw these away.  Not sure why I kept them in the first place--LOL!  Of course, we can clean off the brayers on them.  That may have been why.  ;) 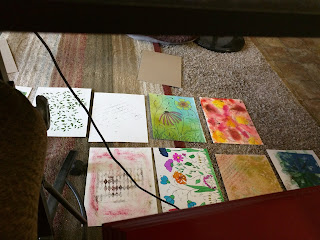 I showed Ian my gelli plates and the brayers.  Told him if he doesn't dawdle next week (he also dawdled forever getting dressed and came later than usual--almost didn't get to come) and if he hurries to eat lunch before he comes over that we could play with gelli plates.  Gelli plates take a long time to set up, play with, and clean up afterwards.  So we'll see how it goes.  ;)
****
He's at that age...where they insist on doing things themselves but then take FOREVER to do them.  I remember Dagan making me want to pull my hair out--LOL!  I notice how, as a slow moving grandma, I have more patience than I did back then.  BUT--I don't have him every day--ROFL!!
****
This month I have been good about working on brush lettering drills almost every day.  I really have a difficult time with the large brushes...like this practice sheet. 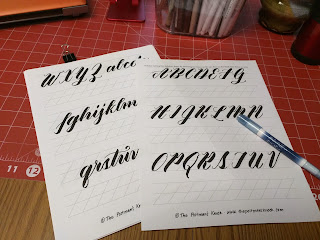 I keep working at learning this, too.  :) 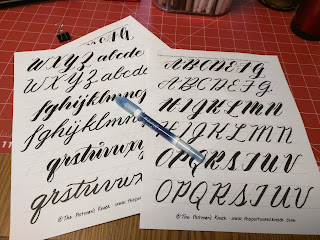 Some of these practice drills are just fun!  Of course, I prefer the smaller brushwork.  Easier for me to control. 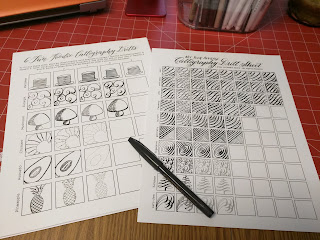 ****
I've kept working little by little in the studio when my knee is cooperative.  That stack gathered right inside the door is all empty containers waiting for a home. 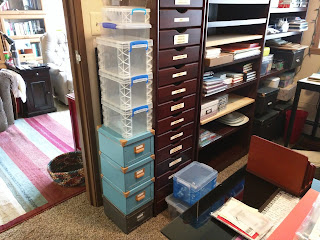 This is what the tables look like right now. 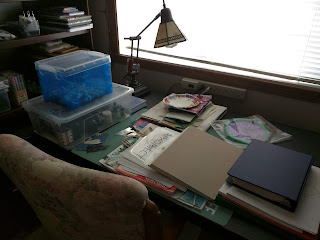 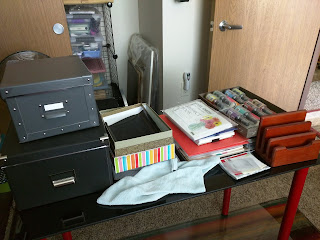 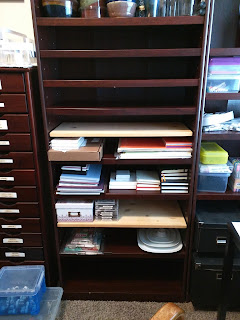 ****
BUT--I had gotten afraid to walk about in there.  Almost fell too many times.  I tried to take a picture but it doesn't show how high up the mats are off the floor. 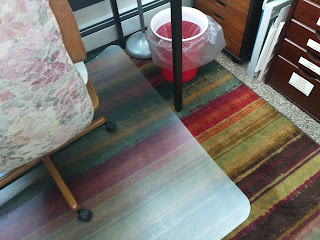 I had even tried flipping them over--to no avail.
****
Here you can see--and my foot is not even touching the mat! 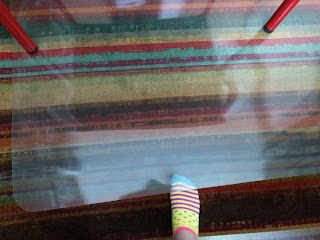 Here on the other one--not even touching! 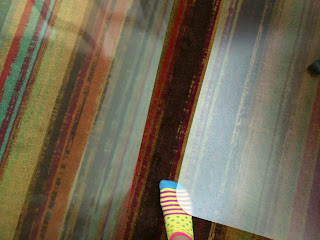 I told Leah that the chair mats just won't go down and I was thinking of putting them outside on the patio so the 90 degree heat might flatten them.  She said Dagan could bring them out to the garage for me and weight them down.  He didn't make it this weekend.
****
So, in order to work in there anymore, I finally drug them both out of there last night and propped them up against the bookcases in the living room behind my chair.  Can you see how warped they still are?! 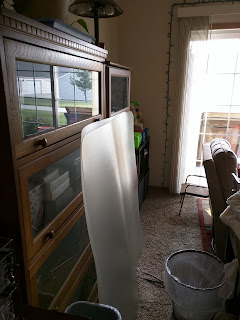 Despite weighting them down with boxes and books and the chair and table legs--they don't seem to have flattened at all from the day Dagan brought them over. 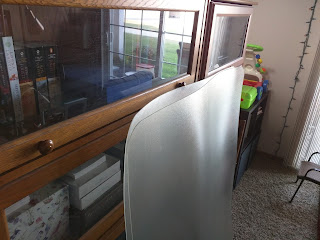 They are just stubbornly wavy. 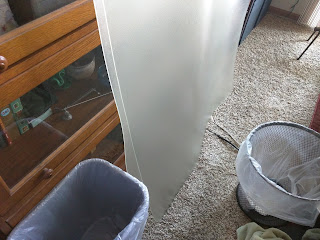 I hope the hot garage will help.  I have a whole bunch of bins out there to really weight them down better.
****
So, that is how this past week has gone.  Kind of strange in some areas, fun in some, and painful in others.  Accomplishments have been/are being made.  Rest has been had.  Letters have been written.  Shows have been watched.  Since there are no birds to speak of, Annie has been playing more with her favorite toy.  So, for those of you who liked her last video...here she is with more energy.  Proof she can actually sit up to play.  (She still prefers being prone, though--LOL!)
****
The new bookcase from Office Max is due to be delivered today.  I am hoping they don't leave it in the entryway like the last furniture I bought from them when I lived in West Winds.  I even sent an email to them because there was no place to leave a delivery note...so time will tell.
Fingers crossed!
****
The hazy smoke from the California fires seems to be moving past us.  Supposed to be 92 again today.  I hope the birds and the bees come back.  Meanwhile--life is good.
****
Have a truly fun week!  :) :)
****
"Laughter is the sun that drives winter from the human face."
Victor Hugo
Posted by Rita at 12:46 PM