Good afternoon!
Another Monday is here and it's August already. 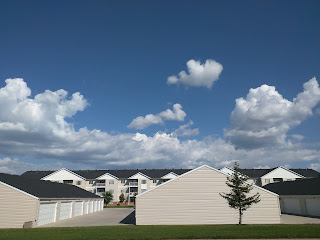 Dagan came with the chair mats.  They're so curled--especially one of them--that I have just had to be patient and have them weighted down.  Might have to get out the hair dryer--LOL!  Might have to remove the striped rug I love...but, in the end, they are going to work great, I think!!

****
Wednesday night the smoke alarm started chirping at 11:30.  Why do they always go off at night?  I had a pack of four 9-volts but they were dated to expire on Dec 2018.  These haven't been changed since I moved in, I don't think.  Those soon-to-expire batteries were all I had so away I went up and down stools to change the one in the hall and the one in the bedroom.  They took forever to stop chirping, but finally there was silence...whew!  I figured I'd be good for a few weeks till I could order some new batteries.
****
9am the very next morning it started chirping again in the hallway!  Not much juice at all left in these.  I switched out another one for some silence in here.  Then I contacted Leah to ask her to bring me over two 9-volts with some juice in them.  That afternoon she dropped two off that said they were good till 2021!!  Was up and down stools again (my knee was not happy but I was).  Whew!
****
Later that night--10pm--chirping again!  Freaked me out!  How could they be chirping with new batteries.  Got a hold of Leah...she finally asked me if there was another smoke alarm in the studio?  Duh!  Yes!!  How dumb did I feel--LOL!  So Dagan brought over another one and a spare--even put it in for me.  Sweet silence ever since.
****
Annie hates those alarms.  One chirping beep and she bolted off my chair and ran into the bedroom to hide under the bed...every time.  They are really loud.  Dagan said he could hear it down the hallway.
****
Anyways, finally done with smoke alarms on Thursday night.  Friday I had an extra long Gramma Day again because Leah, her sister Michal, and brother Aaron left really early to drive down to Minneapolis to her sister Ariel's to go through some things of her mother's that her widowed husband had.  Long story but they drove down and back the same day.
****
Ian arrived before Caroline came with my groceries.  He loves to carry things into the pantry for me.  We had lunch, he changed into his swimming suit, we were out doing the patio (Ian got doused!), dried him off, he changed back into his clothes, and then we had to take a break for Gramma's knee's sake--LOL!
****
We watched some new Maru and Hanna videos and then a little Sesame Street.  Walked down to pay rent and check mail.  Cleaned Bubbles bowl.  Ate dinner.  He played with bristle blocks and matchbox cars.  Got ready for bed--pajamas, put toys away, and packed up all his stuff so we were ready when Daddy was coming to pick him up.  Had a great day!
****
Annie is always glad to come out of hiding when company leaves.
****
I caught her playing with her favorite toy the next morning.  She was about as tired as I was--LOL!

Can that really count as cat exercise?  LOL!
****
We had two gorgeous cooler, albeit damp, days last week.  Then it got right back up there in the 80s again. 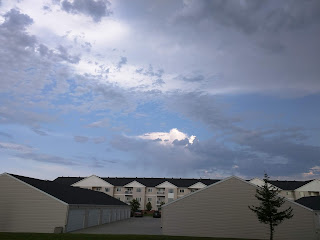 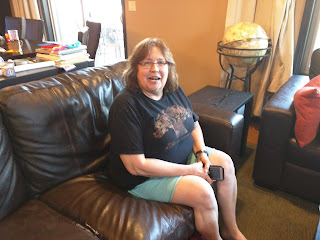 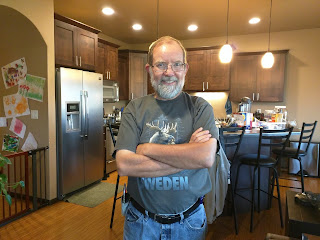 ...and my mom drove up to see us from Minneapolis. 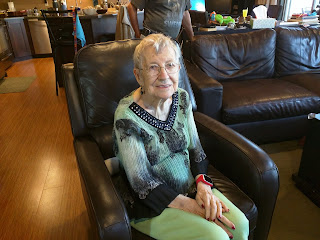 They came to my place first and we caught up over the kitchen table for quite a while.  Then we headed over to McFamily's.  They hadn't met Ian...who is just starting to take happy steps between Mama and Daddy.
I should have taken more pics and videos, as usual.  But at least I have these.  :)
****
Leah made salmon fillets with fresh pesto and dill along with rice and broccoli--delicious!  We had such a nice visit!  We gabbed till close to midnight, I think.  Look forward to seeing them every year.  Mom will be 90 in February.  Here I thought she was 88--LOL!
****
Since then--been basically on rest and recovery.  Didn't sleep much Saturday night, but made up for it last night and slept 12 1/2 hours!  Limping happily about.  Will probably be in more decent shape again by tomorrow...or Wednesday.  ;)  Meanwhile--I'm watching Whitechapel on Amazon Prime.  I'll probably be able to start cleaning and organizing in the studio later this week.  Got three letters this weekend!  And I'm ordering a bookcase for Ian and Liam's stuff here.  Life is good and am feeling quite blessed.
****
Have a fabulous week!!  :) :)
****
"Let everything happen to you: beauty and terror.  Just keep going.  No feeling is final."
Rainer Maria Rilke
Posted by Rita at 2:17 PM

Hi Rita - you remembered to comment !! What a wonderful week you had, Ian Love, Family visiting and visiting. A wonderful meal from Leah and help from Leah and Dagan for the fire alarm chirping. Better temperatures for two days too! A good week, and Rita, you are feeling better than your were last week. Rest and recovery from a such a good week (and if the batteries didn't need changing you would have less recovery I am guessing).
Hugs
Joy

The plastic mats do flatten fairly quickly after being weighted. Looking good!

Smoke alarms can be annoying when they get low on battery. So glad you eventually got them sorted. Thankfully, after new Queensland laws came in a few years back, our smoke alarms get checked every year — organised by the Property Manager.

Glad to hear you enjoyed another Gramma day with Ian. Annie is so cute playing with her toy — lazy play/exercise? Made me smile. hehe

Lovely that your Mum, Blaine and Kathy visited. Congratulations to Blaine on his upcoming retirement. Your Mum is looking great for 89! Well done, Liam! Won't be long before he's running around with big brother, Ian. I'm glad you all had a lovely visit together.

Good for you getting 12½ hours of sleep...it all helps. I have Whitechapel in my Netflix watch list.

I'm so happy life is going well for you, Rita. I hope you have a fabulous week too.

The video of Annie playing with her favorite toy is hilarious - I love it! She's certainly not exerting herself (a typical cat...).

I'll have to think about getting one of those for my cats.

Smoke alarms ALWAYS start "beeping" in the middle of the night. It drives me crazy!!!
When I moved into this place, the previous owners had at least eight smoke alarms. I removed them and put them in the garage - - and eventually they ALL started beeping. It was unbelievable!!!

The plastic mats are already probably flat. You will love rolling back and forth between tables soon enough (grin).

So great to see your mother. She looks good. I am SO glad she recovered after the near fatal accident a couple of years ago. It will be fun to see her more, too.

Never heard of Whitechapel, so will do an internet search to see what it's about. Have a super wonderful day now that your smoke alarms are behaving. BTW, mine are hard wired to my home system, but I still need to change batteries once a year.

Goodness Ian is growing up fast!!

And I think Annie needs a more strenuous exercise... LOL!

I hate when smoke alarms beep. Especially at night. Hope your problem is totally fixed so it doesn't happen again for you.

Your mom is beautiful & so is Ian. You're having wonderful Gramma days with Ian. I get about as much exercise as Annie!!

Sounds like a great time was had by all :) I got such a kick out of the kitty exercise video lol I wish technology would give us smoke detectors that didn't do that. I haven't seen Whitechapel, but I'll keep an eye out for it. I like most of the British mysteries.

Your post just now popped up in my news feed. I don't know why it took so long. But I sure did enjoy hearing about all the adventures you are having with your grandsons. They are definitely growing up fast! :-)

well aren't you the social butterfly! Definitely family week and how wonderful is that! My Mom has been gone for 40 years now, Dad for 25, so I am vicariously enjoying your visits (I have no siblings). Now about those chirping alarms - 1. doesn't your state have laws that the landlord must keep those in working order? MD does! we have to put the 10 year ones in any rental on every floor and outside every bedroom. At my old primary house we have some that are wired in. I took a hammer to one once because I couldn't get it to stop blaring. :O So I understand and am glad you got them fixed! Your gramma days always sound so wonderful. I don't know how you do it. I'd be dead by the end of the day!

Franklin, Penelope, and I hate that chirping, too. Why is it that I have so many kinds of batteries in the closet but never the kind I need at a particular moment?

I am so glad you got to see your Mom and your brother! Sounds like you had a good visit!
Buy some batteries...have Dagan change them when we do the daylight saving time spring and fall, I make Far Guy di o it...I don't like chirping and what if we are gone when it chirps and the battery goes dead then you are sol if there is a fire.

Our smoke detectors are connected to the mains with a battery back up which the Dept of Housing replace every year.

Chirping smoke detectors are the worst! Glad you now have silence again.

Wow Rita, you had quite an exciting week. Ian is starting to walk already? I remember when he was born and that doesn't seem all that long go.Babies sure change fast. And I know what you mean about those smoke detectors. For 2 weeks now a couple of ours have started beeping- and of course at night. It is just annoying but I guess it is good to have them. Hope this week as is good as last week was and you mat has uncurled. Hugs-Erika

My goodness Rita - I have missed a lot! That 'Goldmark' company seems to have quite a reputation! Liam is doing well too. I think smoke detectors can be most annoying but happy to have them so I suppose we have to put up with them! We have a fire alarm test here every week - we go and hide in another room as they are so loud if we get directly underneath them! Sorry to have missed so much - home for this week at least so hoping to catch up wth blogging etc..! Hugs, Chrisx

That's so nice that you were able to see your mother! The smoke detectors that chirp are so annoying to listen to. Glad you got that fixed. :)