Good afternoon!
It's difficult to take a photo of a black cat who's half in shadow--LOL! 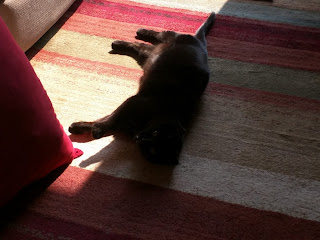 I got closer at a new angle. 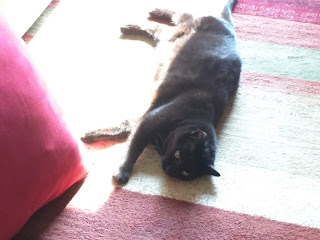 Wanted to show you that Annie is getting stray long white hairs in her old age--LOL!  Maybe you can see it on her upper arm.  Can click to enbiggen--LOL!  (Isn't that a funny word somebody made up?!) 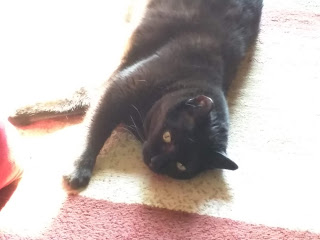 She has a couple more but she's not that easy to get pictures of.  Easier now that when she arrived a year ago, though--LOL!  I'll try to get pictures as I can.  These lone grey hairs crack me up.  Maybe because this old lady is also dealing with stray hairs showing up where they never used to be--ROFL!
****
I am getting a few stray birds.  Twice there was a small group here that reminded me of old times.  Not 20-30 of them, but 5-8.  I'll take it. 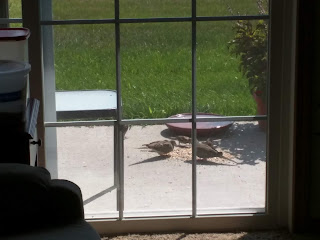 But this is 1/2 cup of birdseed (vs the 2-4 cups I could put out and they wanted more) after TWO DAYS.  Very few birds still.  I have seen a lone bee twice.  Pretty quiet out there. 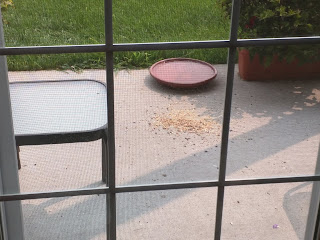 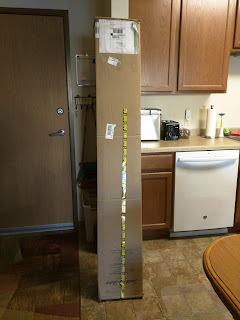 This giant guy (I'm only 5' 1" and he almost could hit his head on the door frame) carried it in over his shoulder like it was nothing (over 70 lb.) on a 90 degree day.  Such a sweet man.  I had a place ready for it right inside the door and he brought it in for me, too.  (Some of them will not enter your apartment even a couple feet because it's against the rules, I believe.)  The bookcase is still there--until we can arrange for a bookcase assembly day.  ;)
****
I've been very slowly plugging away in the studio.  Been basically working on this one bookcase...but gathering in appropriate supplies from other spots that should go in this bookcase with all the extra skinny shelves. 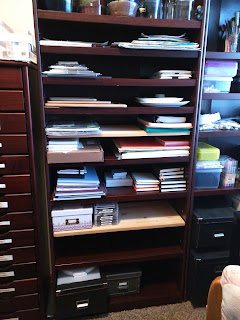 Getting closer to done with this first one.  I picked the two hardest to organize bookcases on this side of the room to tackle first.  The rest will seem like a breeze.  Well, not quite a breeze, but easier by comparison--LOL!
****
Still sorting through stuff... 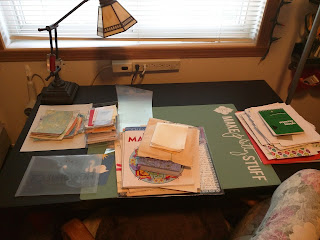 ...but once in a while the tables look more cleared off before I fill them up again.  ;) 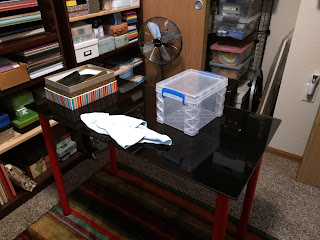 ****
On Tuesday Caroline came to clean and Leah dropped off items from Costco and the Natural Food Store.
****
On Friday it was Gramma Day!  Ian had his lunch at home this time so I could set up the table for gelli printing.  We only used the one small rectangular gelli plate.  I ended up getting out the Pebeo iridescent acrylics in the tubes because Ian fell in love with the shimmer of the gold and silver Dick Blick matte acrylics (in the bottles you see on the right side of the table).  I had picked out a bunch of mark-making trash--also on the right side of the table down front (straws, mesh that held cheeses, pill bottles, pen parts, bottle covers, parts of a syringe/ no needle, an old shower scrubber, PVC pipe samples, cardboard tape rolls, etc).  Had the old gelli prints (that Ian took pictures of last week) ready to use for rolling the brayers clean and a stack of white card stock cut down to fit. 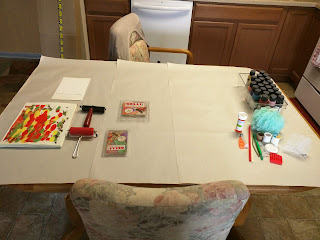 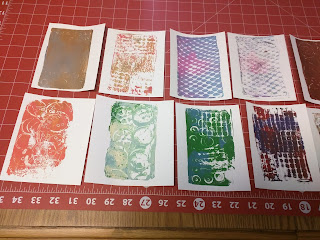 You can't see well from these pictures but 3/4 of these have shimmer paint. 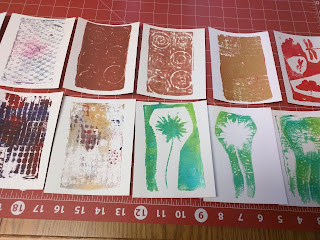 We had such fun!!  Even drug out a few stencils. 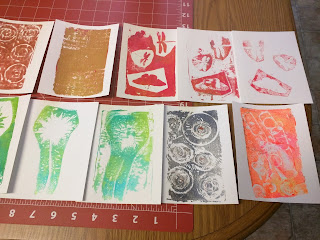 Leah brought these back over with her (how I got pics because I forgot) because she wants to make cards out of them since they were mostly Ian's handiwork with a little guidance!!  Awesome!
****
My back had a rough time standing over the table for so long, though.  Ian and I took a long snack break and watched Ian's favorite on youtube--Maru and Hanna.  Then we went back and played some more until we had used every color of the pebeos.  By that time we were both ready to quit.
****
So I got the stool out for Ian so he could help scrub paint off himself, the brayers, and the supplies we didn't throw in the trash as a few were reusable.  Then Gramma rested her back while Ian played "don't step in the lava" using four pillows.  He moved pillows and jumped and jumped and jumped until he was exhausted and came to sit with me to watch a final couple of gelli plate videos.  Leaves looks like something we should try!
****
Let's just say Gramma was shot--LOL!  On Saturday I never even got dressed--but Leah came over for a couple of hours in the afternoon to make those invites to Liam's birthday party.  So that got done--tada!  And I was still hurtin' yesterday and had another pajama day.
****
Back has calmed down quite a bit by today, so I have been doing laundry and bedding.  I am even able to sit here to blog without having to get up as often.  (Knock on wood.)  Annie is sleeping in the chair next to me at the table.  No birds.  I was out cleaning up the planters and watering earlier--put out a whole cup of seed--and I think I have seen one sparrow stop for a snack.  Oh well.  I'm sure hungry birds will be here this fall when it gets cold.  If they aren't coming around then--I'll be shocked.
****
We've had troubles with sharing photos lately.  This is the only one that came through.  It's a little blurry--but I love it.  Daddy and Liam--eye to eye, nose to nose. 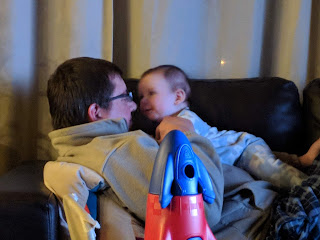 ****
Maybe this week--or sometime soon--we'll get the bookcase together and move things around in here.  I will try to remember to get before and after pics.  During?  Always questionable with me but I hope so.
****
Ian saw the box and right away said he wanted to help put the bookcase together.  I said I don't know what the plans will be.  Could be just Mama and me--don't know yet.  He loves to help, though.
****
Some rain came through that helped clear some of the smoke out of the air and dropped the temperature from around 90 down to mid-70s.  Ahhhh!  Loving it.   Have had the patio door open yesterday and today.  Very, very quiet with no birds.  The flowers look a little better, though.  Maybe they are breathing a sigh of relief from the sweltering weather, too.  ;)
****
Till next week.
May it be a good one.  :) :)
****
"Light is in both the broken bottle and the diamond."
Mark Nepo
Posted by Rita at 4:13 PM