Good morning!
Was a busier week.  On Tuesday I decided to do a simple, quick project...that took me most of the day--LOL!  Whenever I think a craft project is going to be easy it ends up taking way more time than expected.  Leah is the same way--LOL!
****
Wanted to make up some "stationery" and decided to cut apart these (very stinky) botanical border stamps I finally got from New Zealand (through Amazon ordered in March, I believe).  Well, that was quite a project in itself--LOL!  They were so sticky that both my exacto knife with a new blade and my rotary cutter were total fails.  Finally got them apart using a scissors.  Had a sheet of acetate to store them on and picked out some of the Versa Magic ink pads that don't bleed through.  I had to scrub the stamps with soapy water before they would work--but when they did... 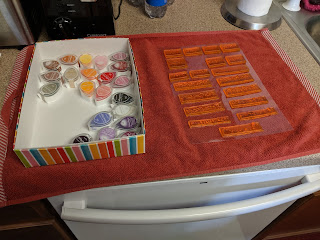 ...I liked them.  First I used the shorter ones where I had to stamp four times across the bottom of a writing tablet sheet. 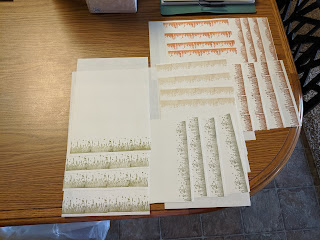 These first ones were a huge test for bleed through as they are the ends of a couple of Tomoe River paper tablets.  I have fallen in love with those Versa Magic ink pads!
****
This time I was watching Miss Marple on Acorn TV.  Was in the mood for some cozy murder mysteries. 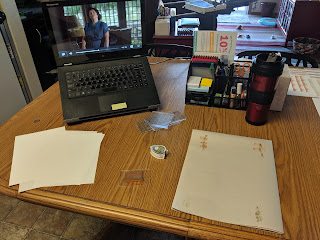 As long as I had everything out I made up four or five sheets with each stamp.  And as I went along I made up a sheet of card stock to show me what they actually look like when I go to use them next time. 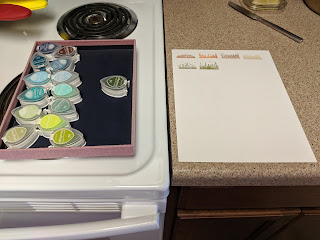 I finished up the Tomoe River tablets. 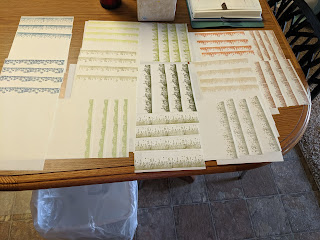 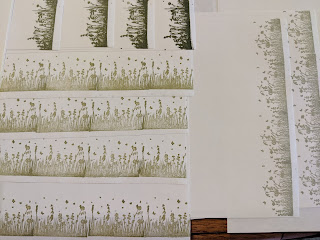 With the last two I had started to use the longer stamps where I only had to stamp two across the bottom. 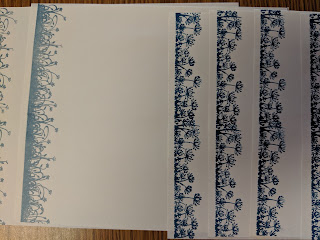 Those were easier to stamp.  I got out a Clairfontaine tablet (thicker paper than Tomoe River) and went to town with the longer stamps . 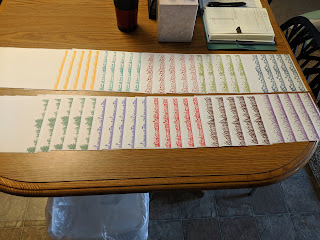 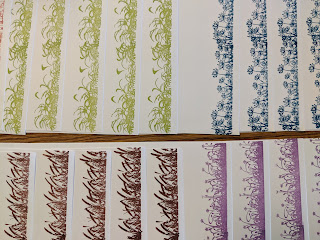 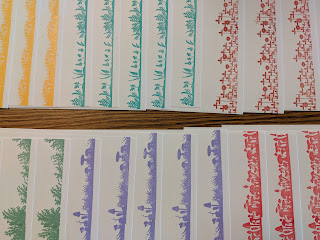 So, I have some more homemade stationery. 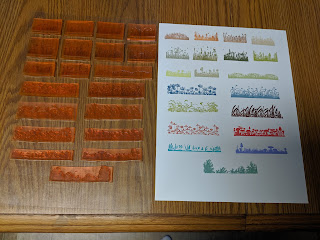 Was worth the trouble because I do like botanical stamps.  Even if a few of these are quite abstract, I liked them. 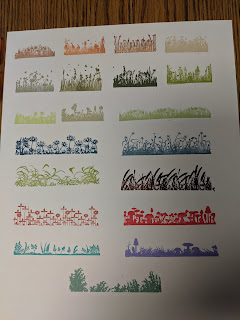 ****
Wednesday was the DMV.  Leah planned to drive around while I was in there so Liam could take his afternoon nap.  Ian is out of preschool now for the summer.  He wanted to go with me.  :)
****
I am SOOOO glad I had an appointment!!  The place was so packed people were waiting outside in the entryway!  But I didn't have to wait long at all.  And he didn't seem to care I was 60 days late, either.  All going fantastically, right?  Then came the glitch.  My own fault.  I didn't realize that they would only accept the originals for your birth certificate and marriage license.  So--had to make a trip home and go back again.  But he said to just come right up to his window...so it didn't take long that time, either, for Ian and I.  Done and dusted...texted Leah...and went outside to wait.
****
It was even more crowded by that time.  People were outside waiting.  I heard they were told there was a two hour wait!!  So even with my screwing up and having to drive home and back again we were still done in a quarter of the time.  I'd never go without an appointment again.  And I will try not to be so late, either.  :)
****
I texted Leah and we waited outside under this beautiful tree that was shedding blossoms in the wind. 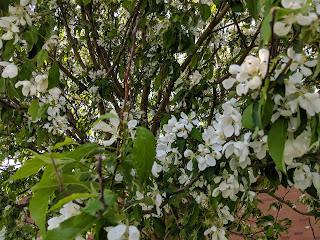 Ian pulled a flower off, which I told him he shouldn't do--just let them fall off naturally.  Leah didn't hear the text, so we spent some time under the tree. 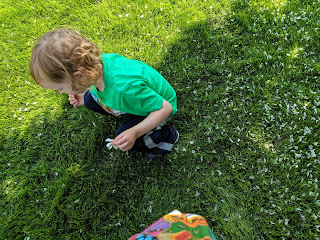 Gave me time to remember pictures.  Ian was tossing the flower up and into the wind and then finding it again and again. 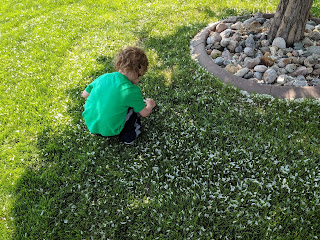 He brought it with to give to Mama.  On the way to my place there was something crawling on Ian's pants.  He was being careful not to smush it.  After they dropped me off they stopped to go shopping and Leah took these pictures. 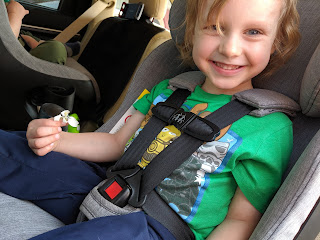 It was the teeniest baby inchworm!  So cute!  Was on his car seat buckle by that time.  You'll probably have to click to enlarge the pictures to see it--LOL! 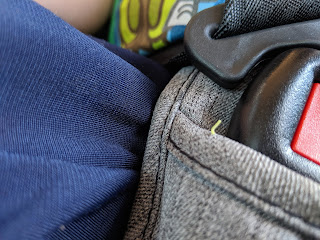 They coached him on to the flower... 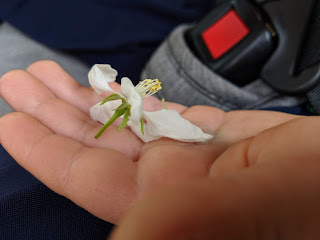 ...and left the flower on the roof of the car. 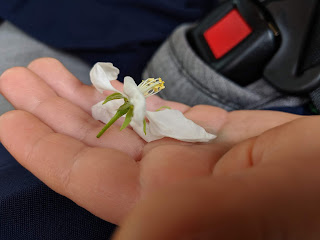 It had blown away by the time they came out.  We hope the teeny inch worm is okay.
****
Wednesday Leah came over for a Craft Nite.  She made the invites for Ian's birthday party in June.  We were talking paper most of the evening.  Found Neenah white cardstock for really cheap on Amazon pantry...if it really is #110 card stock, it will be quite the deal!  (Some people complained it wasn't #110 as advertised.)  Leah is going to order that because she can send it back if it isn't what it says.
****
Then we ended up on an online search for good quality colored card stock for cheaper.  Found a company Jennifer McGuire used to use called Papertrey Ink.  Really good deals and supposed to be #110, too.  So I ordered the sample set of all their colors and the sample set of their colored shimmer paper.  We can hardly wait for them to get here!  If they are as good as they sound we will make a big order of many colors!!
****
We have seldom used colored card bases because the paper gets too expensive when we are making about 100 Christmas and 50 birthday card sets.  This will be such fun!!
****
I had a Gramma Day on Saturday and Ian and I Marie Kondo'd his bookcase!  Took everything out and piled it all on the kitchen table.  Then cleaned and sorted it all! 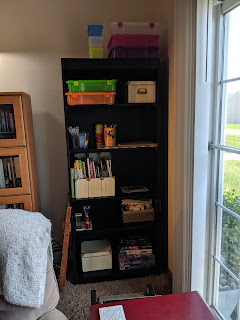 I wanted him to be a part of it so he knows where everything is...and where to putt it back--LOL!
****
Then we watched some PJMasks till it was time to go home for dinner.
****
Leah has back issues, too, and she brought over her leg wedge pillow for me to try.  I did.  For two hours.  It was good for my legs but I just can't lie flat on my back anymore--not even with my legs raised up.  I'd need a wedge pillow for lifting up my torso, too.  Like a homemade adjustable bed--LOL!  At least that didn't set my back off for more than a day--whoohoo!  Potential, I'd say.
****
Today--Caroline is getting my groceries and will be here shortly so I need to move and clear off the table.  Leah is planning to try to make it for a Craft Nite tonight.  I got a call from the Goldark office and they claim they didn't realize they had to do a full-on re-certification every year for my rent reduction.  (I just did one for Federal Housing.)  I have never had to bring the past six months of my bank statements before...good grief.  They want copies of everything.  So I need to spend another afternoon finding and copying paperwork for an appointment in the office here at 11am on Thursday.
****
Thursday afternoon we are going to Baker Nursery to buy flowers!!!  And Friday afternoon we are planting on the patio!!!  So looking forward to having some color out there.  And I don't have much time to tell you about the vole!  There's a vole that is nearby and runs across my patio here and there.  Annie is on alert ever since she caught sight of it. 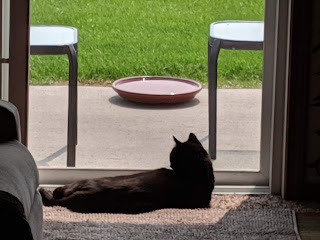 She isn't even eating half the food she was.  Spending all her time at the patio door...watching...waiting.  I guess it is the one thing she misses from her days on the street.  Killing.
****
Well, that's it for this week, my friends.  We've already had a couple 90 degree days in May!  Again tomorrow, I think.  This could be a long hot summer.  No time to proofread...till next week...  :) :)
****
"Be happy for this moment.
This moment is your life."
Omar Khayyam
Posted by Rita at 1:42 PM