Good afternoon!
The critters seem to always know when a storm is coming.  The partridges were just hunkering down where they knew there was food...which is why I tend to keep the blinds only half open so I am less likely to scare them away. 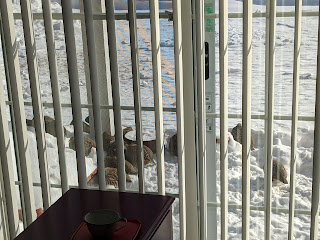 The cottontail was here for a couple days, too, before the storm hit. 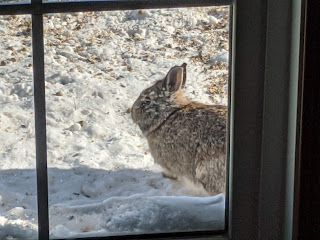 ****
Wednesday I went to meet another new doctor who set me up with different BP pills so that the dry cough should disappear within a couple weeks.  She was okay, I guess, but I decided that I'd like to try this other doctor who is also listed as an osteopath.  Do have to go to a different clinic to see her, but I am going to try her (Dr. Kessler) for the new BP pill checkup end of February.  I'd like to find a regular doctor that I feel comfortable with, if I can.  Oh, and I go back for a random free BP check any time after I've been on these new pills 2-3 weeks.
****
Because of the clinic visit, I never got around to doing the calligraphy lesson on Wednesday...but I did do a small section on Thursday so I could at least check it off my list.  ;) 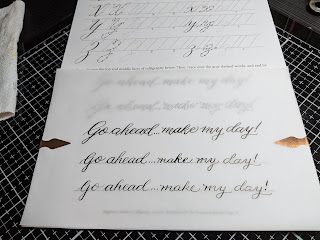 ****
Was kind of tired and head stuffed up again this past week.  Leah wasn't full of energy, either, but we managed to get the oval wooden labels velcroed to the new bins in the bathroom on Thursday night. 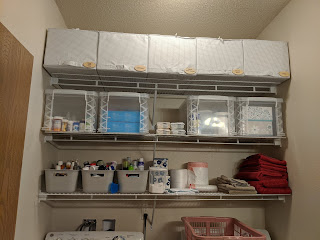 Used velcro dots and Leah's label maker.  They can be removed or changed as needed.  Nice! 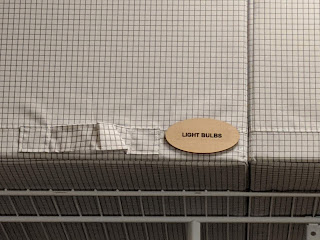 ****
By Thursday night the wind had arrived...and continued blasting my windows all day Friday.  We had 60mph wind gusts on Friday and 50mph on Saturday.  Yup--another blizzard when the snow arrived on Friday.
****
Annie seemed unconcerned--LOL! 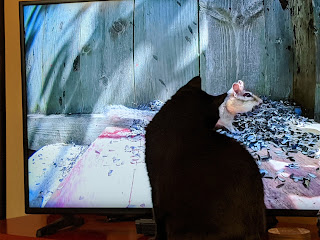 But she did check for critters after I tossed out some seed onto the new drift across my patio. 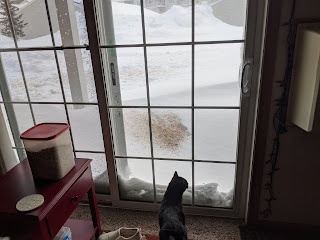 There was lots of drifting with those high winds. 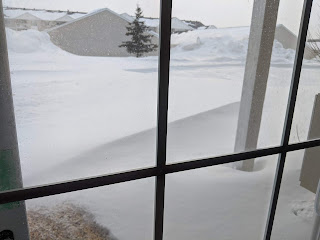 Even after it stopped snowing the winds blew the ground snow around. 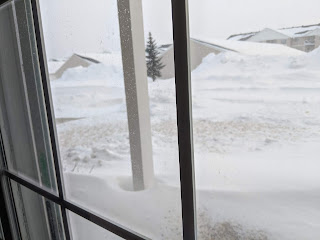 Immediately,  the seed was covering up with snow. 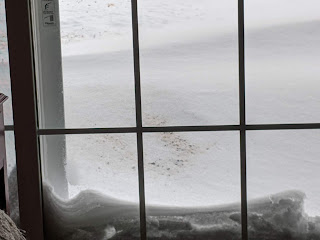 In just ten minutes it was covered. 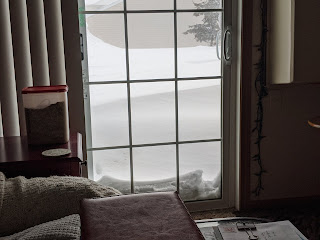 But the local critters know to come here and dig.  The cotton tail got very busy digging a hole down to a layer of buried seed. 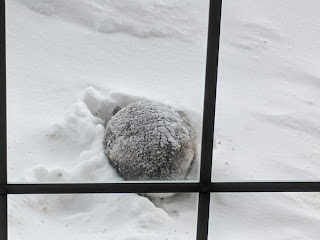 There were a couple layers of seed down there, actually. 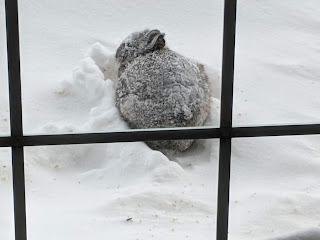 As soon as either the rabbits or the partridges come to eat the smaller birds show up to gobble up any seed that has been unearthed by the bigger critters who can dig deeper. 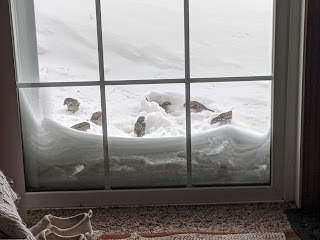 I took these pictures one right after another of a partridge sitting on top of the snow drift... 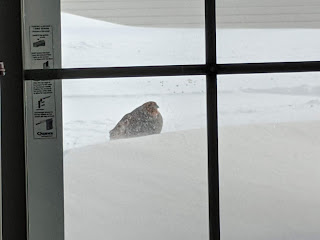 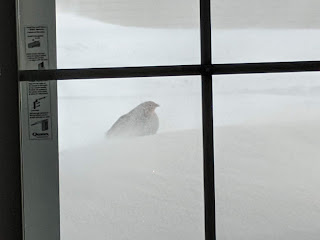 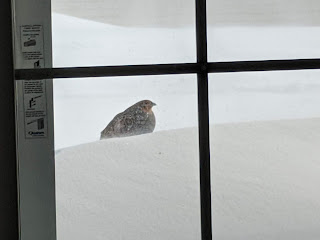 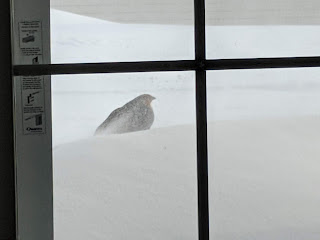 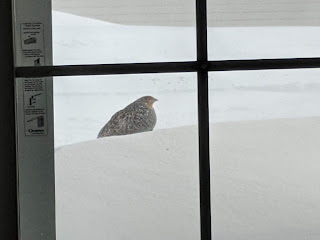 They learn how to endure the wind, I guess.
****
By later on Saturday the wind died down a bit... 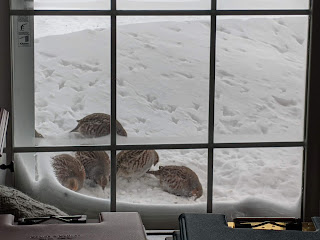 ...and it was easier for them to dig out seed that was barely covered by the lighter wind. 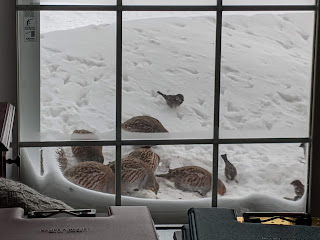 Annie seemed annoyed that the birds were so hungry that they didn't even notice her trying to scare them away.  (Good!) 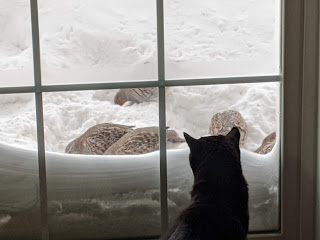 CatTV hasn't lost its appeal, though. 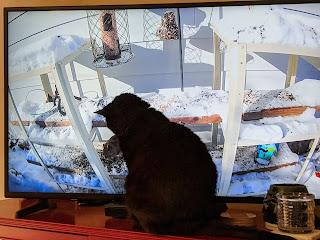 Annie will binge-watch chipmunks and squirrels, especially.
****
We've gone into the deep freeze again.  Both Sunday morning and this morning I couldn't get the patio door open because it was frozen shut.  By about noon the sun had warmed it up enough that I could open it and get some seed out there.  Partridges ran from beside the building where they had been huddled together... 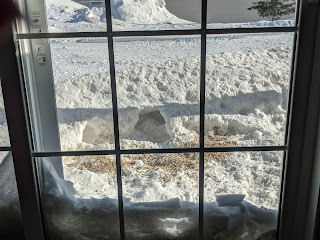 ...and four of them came scooting out of that hole that the rabbit had started after the storm--LOL! 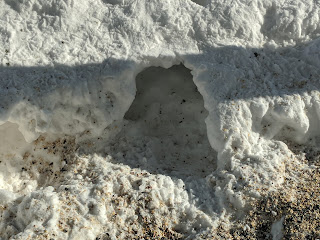 Startled me!  I bet it was nice and cozy huddled together inside that hole, though.  :)
****
The snow banks keep rising, settling, and then rising again with the next storm. 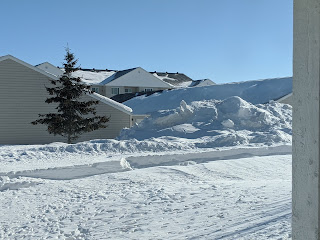 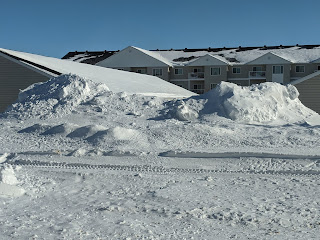 ****
Anyways, today--I took a Musinex and am doing laundry...because I need to.  Would rather be curled up with Annie in my chair under a warm blanket--LOL!   Been that kind of week.  Binge-watched Grace and Frankie on Netflix.  :)  Having quiet, peaceful days is always a good thing.  ;)
****
Till next time...keep smiling!!  :)
****
"May you grow still enough to hear the splintering of starlight in the winter sky and the roar at the earth's fiery core."
Br. David Steindl-Rast
Posted by Rita at 2:29 PM