Good afternoon!
Well, maybe an okay afternoon--LOL!
****
I had a couple good days this past week.  Blogged on Monday.  Caroline came to clean on Tuesday and then Dagan stopped by after work, filled the seed bin for me.  He stayed for a short chat.  Leah came that night for crafts.  Basically she did the prep work for Ian's Valentine's Day cards for preschool while we chatted.
****
They're using the same little envelope die cut but this year Ian wanted lots of colors and hearts on them.  So Leah cut out the envelopes and a bunch of colored hearts, too, using that die you see there.  I know Ian wants to glue the hearts on and he writes out the names.  This is something Mama and Ian do together.  :) 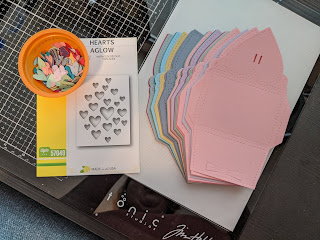 The plan was to have Leah stay on Gramma Day this past weekend and they would work on the Valentines.  We also planned on me going over for a visit on Friday.  Dagan was going to pick me up after work on his half day.  Well, so much for plans--LOL!
****
I hadn't been feeling great but on Wednesday I went into a fibro flare (could be oxalate dumping, too).  I found out Leah got really sick with a 102 degree temp and Dagan stayed home Wednesday to take care of the boys so she could be miserable on the couch. She still felt crummy for days after the fever broke.
****
Me--I wasn't up to even getting mail (which I will go check when I am done here since I actually got dressed today).  I never did the calligraphy class or the questions blog on Friday.  Hopefully this week will be better.  I barely worked on letters--for those of you waiting for one.
****
You know I am feeling cruddy if I don't even work on letters--because I am all set up to do that right there in my chair.  I'm normally working on letters at least 5 days a week.  (My mind is usually the one thing that feels decent--LOL!)
****
Anyways, having a very low spoons week is nothing new for me and I didn't run a high temp or anything.  Leah's doing better last I heard.  But since I was feeling like a noodle and didn't want to catch what Leah had--we called off the Friday visit and the Gramma Day this past weekend.  Hopefully all will be better and it will be a go for this coming weekend.  Time will tell.
****
LOL!  Further proof I wasn't up to snuff.  Only three other pictures...of the partridges in the snow. 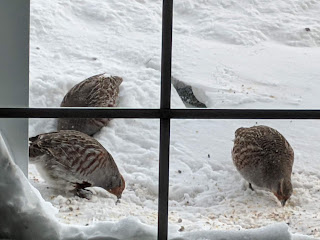 Can you see the partridge at the top right? 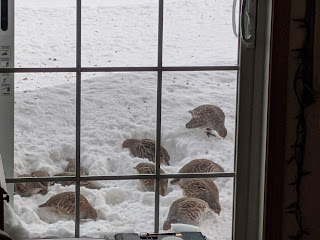 It has an injured wing. 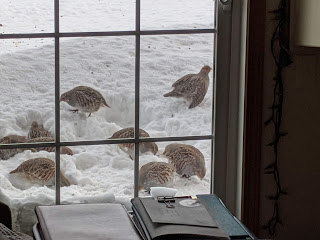 Been around here like that for maybe two weeks.  I have never seen it try to fly so I don't know if it can.  I've seen it show up with two others a few times--just the three of them.  I think it stays nearby for the easy meals.  Glad it is still doing okay and looks healthy otherwise.
****
So, that's it from here, I guess.  Not much going on.  Been binge-watching shows since it's been mainly a chair-blanket-Annie-TV week.  Annie doesn't mind at all.  ;)  I am such a soft touch that every once in a while I put Annie's CatTV on the big TV and watched my shows on my laptop-ROFL!
****
I hope you have been doing better than I have.  Not that I've been "sick-sick"...just the usual bad times or flares I get.  Nothing new.  I just settle in and escape into TV and videos to take my mind off it.  Wait it out.  Endure.  Make it the best time I can.  Annie helps with that.  Karma did, too.  Two cats with very different personalities.  I don't think I would ever want to go too long without a good old grown cat, to be honest.  They are inherently lazy.  Perfect chair company for a health-challenged, slow-moving, creaky, old lady.  :) :)
****
Till we meet again...
****
"I have decided to stick to love...
Hate is too great a burden to bear."
Martin Luther King Jr.
Posted by Rita at 4:00 PM

Glad to hear you are better, but sorry to hear how sick Leah and you got before you started to improve. That poor partridge is lucky to have easy food, thanks to you. I'm hoping that everything will just be pushed back by a week and you'll have everything together by this coming weekend. :-)

Hope you have more spoons this week so you can have craft time and do more things! :)

Endure.... sometimes we have to do just that. I hope life is soon better than just enduring for you Rita. Big Hugs! deb

Sorry to read you aren't doing well. I have been sick-sick, but am feeling better. I think I got whatever Leah had, because I had a high fever, too. My friend Scott frequented my friend (and neighbor) Sally's to get ice since she has an ice maker. It helped bring the fever down.

Sorry you missed Gramma day and many photos of the birds. However, you and Annie got snuggle time, which I'm sure helped both of you. Feel better soon, dear.

I hope you feel better and get some energy back. It was wise to not get together with Leah while she was sick. It sounds like she may have had the flu with that fever. I hope she is starting to feel better. Tom has the flu now and is really sick. I have to keep an eye on him because he has some health complications.

You know, cats are great nurses when you are sick or just don't feel good. I think they sense when we are not well and stay close. Actually I think cats love having us pinned down in a chair and not moving around!

I'm sorry to hear you've had such a hard week :( but hope you're better soon. Poor little partridge. I'm glad it has found a place with easy and safe food :) Here's hoping you have a better week this week!

Hope you feel better and everyone else in the family too!!

I'm so sorry to hear that you and Leah have been feeling bad. It sounds nice and cozy, however, to be bundled up in your chair watching shows with Annie. The cold winter weather always multiplies my health problems (but I'm glad my furnace is working!).
I feel so sorry for that partridge with the injured wing. It's a good thing he has something to eat.

Trying to read this and comment but after the fourth interuption I gave up and now I have a headache. Leo loved the rabbits

I've kept you in prayer even thpugh I was stuck offline for a few weeks. So sorry to read that you've been having a harder time lately. I understand the cold weather making your health worse, does that to me and Jerry, too. Winter sure is harder the older we get, huh. Waitin' on Spring.... Will pray about Leah feeling poorly, hopefully she's better soon. Sad for the little partridge and his wing, at least he is around where he can feed easily and has his friends. Stay comfy with Annie and take it easy, Rita! Hugs and blessings to you! ♥

Sorry to hear you were having a challenging week. Hope you are feeling better soon!