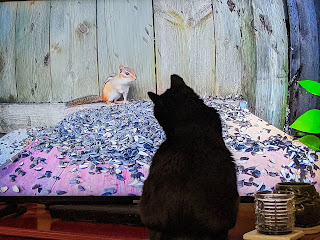 They have certainly not lost their appeal.  ;)
****
Monday I went to the rheumatologist.  She wasn't actually a new one to the area, though.  She came over from Colorado to help out Dr, Blom--said Dr. Blom was working part-time so she could take care of her baby.  I know I looked puzzled because she hadn't looked pregnant at all when I saw her four months ago.  Then this nice lady told me that she probably had the baby before I had met her...and she turned away like she didn't want to talk about it.  Made me wonder if there's something wrong with Dr. Blom's baby?  I hope not.  Having lived with that with Dagan...I really hope I am wrong.  I guess that means that I still have Dr. Blom as my primary rheumatologist and I really liked her.  Gosh--I hope there's nothing wrong with her little one.
****
Anyways, unless something flares up or something new happens I don't need to go back.  Kind of what I expected as I don't use pain pills so there's nothing to renew.
****
Off to the new family doctor on Tuesday.  Loved her smiley chatty nurse who told me that Dr. Kessler's osteopathic practice at the other clinic is covered by Medicare/Medicaid.  Nice!  Her nurse said Dr. Kessler wishes more people would go low carb and that she deals with many patients with fibromyalgia as an osteopath.  Whoohoo!!  Plus my blood pressure was lower than it has been in years!  136/88!  So these new pills are working well.  All great news!
****
Dr. Kessler was nice--quieter than her nurse--but then again, I was so delighted that I could see her as an osteopath, that she deals with fibro patients, and she knows about keto--well, let's just say I can be an overwhelming force when excited.  Just ask Leah!  I was still all wound up when I got out to the car when she picked me up--LOL!  (Being shy, I think I used to scare Leah sometimes when she first met me.)
****
Meanwhile, she sent me to the lab for some bloodwork...especially since I have been on keto and wanted to start on carnivore to see how that goes.  (All good results and she said go ahead with the diet plans!)  She also set me up for a bone scan on March 12th to see about osteoporosis.  Never have had that done.  And sent me home with my yearly poop test--LOL!  Plus--I am set up for my first visit with her at the other clinic for March 27th--day before my birthday.  I will get links to a couple questionnaires to fill out ahead of time online.  The first visit will be 80 minutes!  In depth about health history, lifestyle, diet, etc, etc.  I am looking forward to it!  ;)
****
So--I think I have found my new primary physician!  And she'd be my osteopath, too.  Awesome!  I'll have a better idea after the long visit end of the month.  :)
****
This week, instead of doing my calligraphy lesson, I worked on setting up the bullet journal.  Worked on headers for March and April.  Got things filled in for March.  The calendar... 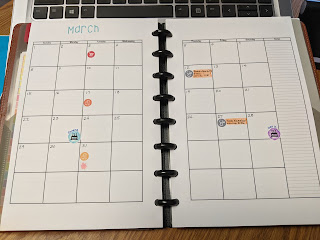 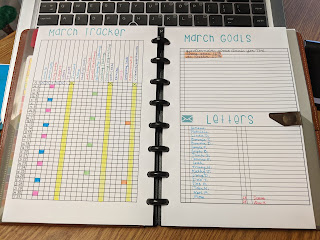 You can see I was using stamps for March.  "Correspondence" was just too long--didn't have enough letters to do it in one go...so "letters" had to do.  ;)
****
Filled in what little I have so far on the weekly spreads for March. 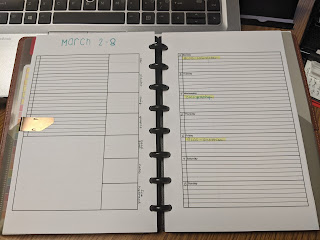 The April headers I just used a green brush pen. 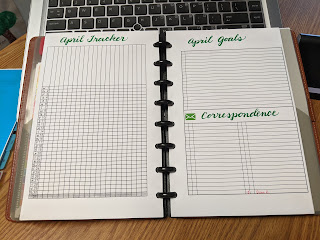 Didn't feel like doing anything too intricate...maybe in May.
****
Leah popped by Tuesday and Thursday nights...mostly to chat about our oxalate dumping--LOL!
****
On Friday Caroline's new supervisor came for the annual home visit.  I was confused when she called because her name is Tammy and I also have another worker named Tammy that I've only talked to on the phone.  Hard to keep them all straight--federal, state, and county workers.  Anyways, she was really nice.  Sweet lady!
****
While she was here Dagan popped by after work to bring in and dump a bag of bird seed for me.
****
I was the one who cancelled Gramma Day this weekend due to IBS issues.  Added some supplements that didn't agree with me, I believe, so I stopped taking them.  I think that is better now since yesterday--knock on wood!  And another week has flown by.  :)
****
We had some sunny days and above freezing weather.  Might even have rain this week--goodness!  Getting rain would melt those snowbanks a bit.  As soon as it starts to melt the flood watch begins up here on the Red River...and I have to put out less seed as the coveys and jackrabbits can find more of their natural food elsewhere.  The partridges are still here every day at dawn and dusk, but not as often during the day.  The jackrabbits don't usually show up till dusk when it's warmer out, either.  You can tell they aren't using up as much fuel to stay warm.  ;)
****
When it was really sunny I was having weird light sensitivity--enough that I was afraid of getting one of those aural migraines again--awk!  So I had the blinds just cracked and not open and most of the time had to view my Bird Cafe visitors like this: 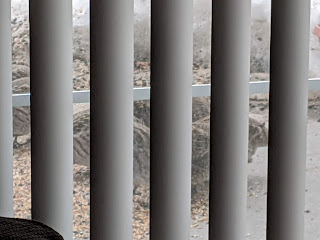 ****
March!  I swear the years seem to go by faster and faster the older I get.  Well, folks--everyone be careful out there--especially those of you who are anywhere near one of the virus outbreaks around the world.  The change of seasons is coming, whether warmer or cooler, and that is always nice.  Won't be here for a while, but I have seen pictures of places where they have flowers and green again...so hopefully the hot areas will be cooling off and leaves will be changing soon.  This is what happens when it starts to melt at all up here--we start thinking spring--LOL!  Till next week...  :) :)
****
"The place to improve the world is first in one's own heart and head and hands, and then work outward from there."
Robert M. Pirsig
Posted by Rita at 5:24 PM