Good midday!
I splurged and got the critters a suet cake and some sunflower hearts.  Tossing out the sticky suet was funny.  It landed on one corner so that it stood upright on the cement.  Nobody would go near it.  I moved it over on to the lawn.  Nobody has touched it that I can tell.  I know I don't really have the right kind of birds, but I took a chance.  BUT... 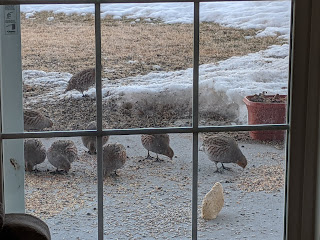 ...they're not eating the sunflower hearts!?  That is usually such a treat.  They smell okay to me, but maybe they can tell they've gone bad or something?  They'll eat all the regular bird seed and leave the sunflower nuts.  Crazy!  Not even the jackrabbits?  How odd.
****
A sure sign of spring for me...the partridges have gone crazy!  They chase and chase each other all over the place out there.  Love is in the air, I guess--LOL!  They're so busy chasing I can put out a third of the seed I was and there might be some left in the morning.  So I take it the jackrabbits are a little preoccupied, too--LOL!
****
We had it get up into the low 40s a couple of times.  Right now today--back to a chillier 15 F.  But the warmer days melted the snowbanks quite a bit, as you can see. 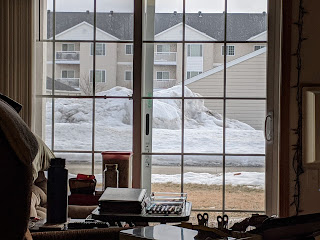 ****
Tuesday I stopped the new supplements and went back down to the bare minimum again for a couple of weeks.  That helped.  Leah stopped by with some premade foods I could nuke.  (She's such a sweetheart!)
****
Was a pretty quiet week because kind of in recovery mode or healing mode or whatever.  Low spoons has been the norm for a while.
****
Thursday I had a couple packages arrive from Amazon.  Dug deep into the side of my thumb with the point of a boxcutter--duh!  So I was up to even less for a couple of days--LOL!  It's healing fine, though.
****
Dagan came by after work on Friday to fix my Chromecast that wasn't working.  He has the magic touch for things like that.  Both Leah and I had tried--he fixed it in no time but wasn't quite sure how he did it--LOL!  The magic touch!
****
Saturday I had a Gramma Day!!  Ian got to see what I ordered him--his very own big blue craft mat!  When he puts up the side of the gatetable it covers the table almost! 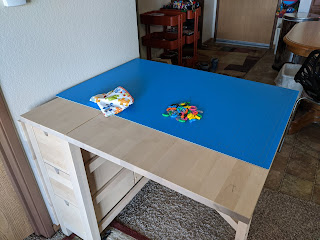 He was just as fascinated by the salt lamp I got.  We had just seen one at the Natural Grocery store where I had told him I had seen one on Amazon that was larger and cheaper that I had been looking at. 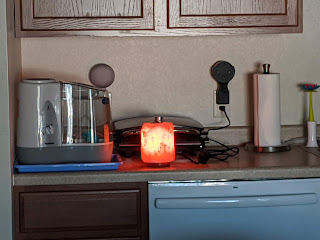 It has a little metal cup inside the top that you can use as an essential oil diffuser.  A small set of essential oils is supposed to be out for delivery today.  Hasn't arrived yet, but you can be sure I will try out the diffuser when they get here.  :)
****
Ian seemed a little tired.  Probably a bit worn out from being sick recently.  Gramma's is a nice quiet place to rest.  We watched the second half of Cars from the last time he was over.  He watched some PJMasks episodes, too. 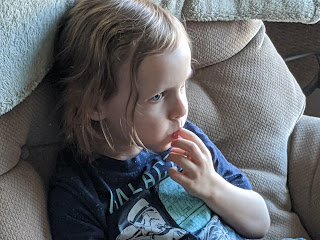 But Gramma was bored.  (I like Stinky and Dirty better--LOL!)  Said I wanted to do something else.  Ian said sure--and wanted to do alphabet and number workbooks that you use a waterbrush with. 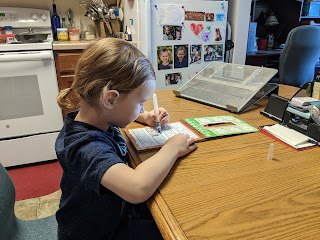 We had fun guessing what was in the hidden picture to go with the letters of the alphabet.  Lots of laughing! 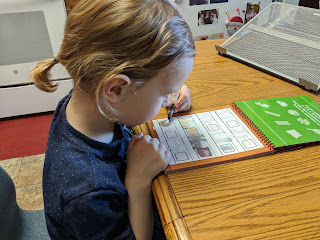 That's what we were finishing up when Daddy came to pick him up at dinnertime.  I have to say there's been a big difference with Ian since he's been off the sugar!  He's been just a joy and full of smiles and hugs!
****
Yesterday I did some laundry and caught up on comments.  I usually try to respond to each comment on the blog but was two weeks behind...so I just responded to questions and a few really funny comments I couldn't not let them know they made me giggle and a few conversational ones I couldn't pass putting my two-cents worth into--ROFL!  Okay--you know me--I can't always remain quiet--LOL!
****
Anyways, I may have to do that more often...not responding to every blog comment.  I hope you don't mind.  Just like I don't comment every single time on your blogs.  Especially those of you who have the energy to post often--LOL!  But I read your blogs, I love each and every comment, and I hope you always know that.  :) :)
****
Last night I worked on the calligraphy lesson I was supposed to do on Wednesday.  (Somehow the calligraphy days are not as consistent for me as the blogging days.) 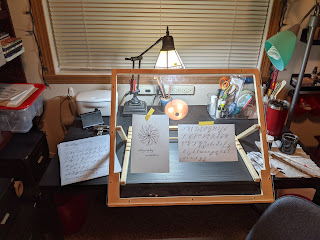 This is another practice alphabet that I traced... 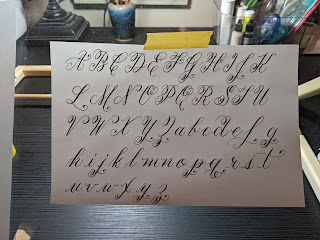 ...and this is the calligraphy medallion exercise that I did freehand. 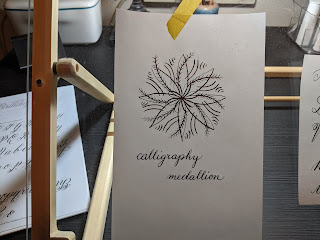 So, I have finished the beginner (pointed pen) calligraphy class.  Now I have to decide what to work on next.  Practice what I learned in this class or start another one?  I have several of these online classes.  There was a lot of tracing in this first one.  I know I could use a ton of freehand work...but then there are some fun styles to try in the other classes and they have a lot of repetition?  Well, I'll try to remember to take pictures of the various classes I purchased with the different styles (fonts) to learn so you know what I'm talking about.
****
This week I go on Thursday to the hospital for that bone density scan.  If you've ever had one let me know what they do, okay?  Is it like an x-ray?
****
Leah and I always plan to try to get together on Tuesday and Thursday nights.  Doesn't always happen, of course.  This last Thursday they were switching their big TV for a replacement (was under warranty).  It's a big TV and takes two people to move it!  I hope this one works right.  And I hope we all stay healthy so I can also get in another Gramma day this weekend with lots of hugs.  :)
****
Everybody stay safe and keep washing your hands, etc.  Me--I'm a constant face toucher, now that they brought it up--LOL!  Hard habit to break...especially when you're blowing your nose and wiping your eyes all the time...and used to holding your chin in your hand while you read at the computer.  Good thing I spend most of my time in solitary confinement--ROFL!
****
I will try not to touch my face--or much of anything else- while I am at the germy hospital and clinic.  If that virus is determined to pounce upon me, though, it just will.  But I haven't gotten the other dangerous flus and viruses that went around, despite being one of the vulnerable population and taking no extra precautions.  This time I'll take some extra precautions...only because this one seems a bit more sneaky...but, beyond that, I just hand myself over, you know?  No matter what happens I think my soul is okay...or is okay enough.  ;)  I most sincerely do try to live my life like each day could be my last.  One day that will pay off--ROFL!  ;)
****
I pray all of us are safe or if we do get it that we get over it quickly and don't infect anyone else.
****
Meantime, enjoy your days and appreciate the little things.  We should all do that every single day, regardless, right?  Live life with no regrets.  Don't let joy pass you by.  Life is such a precious gift.  Till next week...I'll say bye for now as I watch the crazy partridges racing about with spring fever and Annie dreaming of sinking her teeth into a chipmunk--LOL!  ;)
****
"If things go wrong, don't go with them."
Roger Babson
Posted by Rita at 1:51 PM