I am not moving quickly today, but it was such a good week.  Glorious fall days--sunny and cooler--ahhh!  Today rain is supposed to be arriving soon and that will also be welcomed. 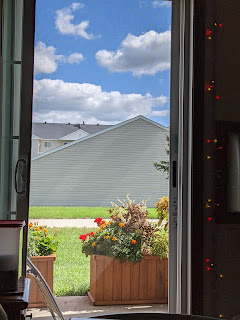 I researched what people bring in their chemo bags so that I have a checklist now.  Ordered a chemo bag (just a large mesh beach bag) and a laptop sleeve and some zippered bags I can put a variety of supplies inside.  I don't plan to bring my actual purse with me to chemo.

On Wednesday Leah dropped off some Cashwise from a grocery pickup.  I got a little visit from the boys, too.  They also like Zevia.  It comes in smaller cans and I have a small supply of those here, too, in my frig door. 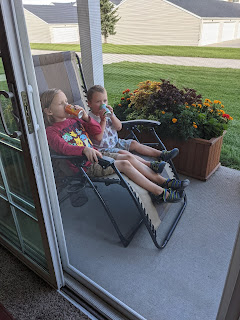 My visit on Sunday was top priority for me so I opted to have the sauna brought over and put together the following weekend. 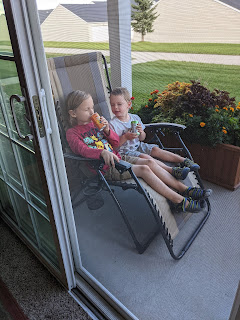 While the boys were here we went to turn on the old slow-to-start fan and--well--completely refused to start that time.  Seems like that is how my fans always die.  Once they get to taking forever to get moving their days are numbered. 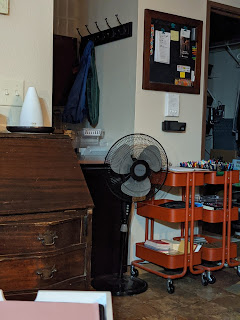 On Thursday I did laundry and Leah came over that night--with a new fan! 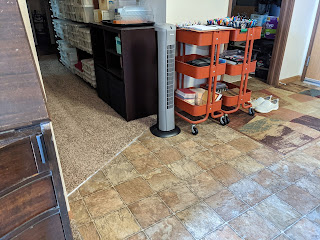 I've never had one of these tall skinny fans.  It takes up so much less room, works great, and even has a remote.  Nice!  I love it!  Another little silver lining.  :)
I can't resist tossing seed out in the middle once in a while to I can see the many birds that come to dine just a little better. 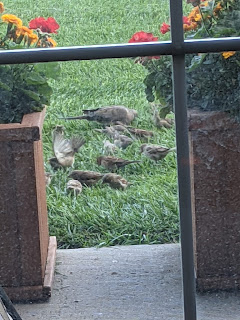 The new planters may make it a little harder to see all the visitors but I wouldn't trade them for anything!  Going to be interesting this winter to see how the drifting is...if we get much snow, that is.  Hasn't always been the case lately.
Anyways, the only extra project I (barely) started this last week was trying to reconstitute the Silks paints.  So dried that I ended up literally pouring hot distilled water into each jar and leaving them to soak. 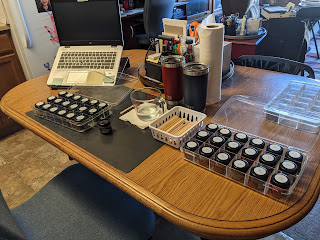 They're still soaking--LOL!
This was a special little treat for me this month.  It is actually acrylic drawers made for eyeglasses.  (Who has that many glasses and sunglasses?) 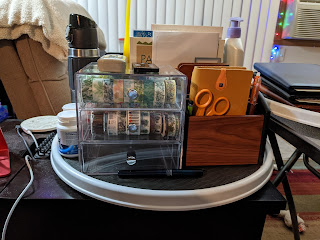 Washi tapes fit perfectly in there! 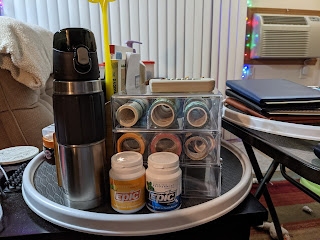 I have all these washi tapes and I do like to add them on to letter paper...when I would remember and go get some out of the satchels in the hallway bookcase.  I'd often have little piles of washi tapes sitting around on my endtables because then I wouldn't want to put them away...in case I wanted to use them again.  So--now I have a whole bunch by my chair (where I do most of my writing of letters)--at my fingertips!  And I can switch them out for seasons or holidays.  Little things like that make life more fun.  :)
Friday was my labwork day.  So funny--Leah picked me up, I climbed up into the passenger seat, and in a couple of minutes Liam told that Daddy was with!  They wanted to see if I would notice--LOL!  I didn't.  He was way back behind the boys' car seats!  I didn't even know there were more seats back there--LOL!  Leah was dropping Dagan and Ian off to go golfing after they dropped me off at the hospital.
Yes, I ended up having to go to the hospital lab after all.  Got a call on Wednesday that in order to have the courier pick up the kit in time to deliver it to a lab in town I needed to go in earlier and at the hospital lab.  Well, I tried.  Luckily it wasn't as packed in that waiting room as it had been the last two times.
They were waiting for me, the lab guy said.  Called my name early, even.  Some box kit with a lot of paperwork and they had called ahead to make sure they had everything ready.  He had to call someplace to get the proper code number to get into the computer information.
I asked him if he knew what this test kit was actually for and he really didn't.  Thought it had something to do with DNA. ?  I told him I thought it must be some kind of pre-chemo testing.  Told him about the cancer as he drew two big vials of blood.  He said the nurses there for chemo are super nice.  I told him what kind of gramma I am...showing the two little grandsons how I peed like a boy (emptying the catheter bag)...and left him laughing!  :)
While Liam slept in his carseat, Leah drove me over to the Natural Pet Shop so I could pick out some cans of no-grain cat foods for Annie to try.  Mostly pate--at 15 she's not so much into chewing anymore.  I know how she feels--LOL!  Then I was back home again...and the new larger cans also fit in the new acrylic holders I ordered. 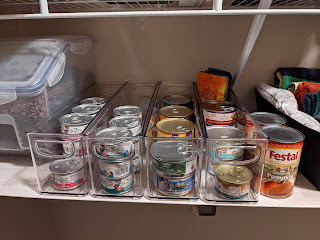 Love these!  They're easy for me to get to and organize.  The pumpkin cans are Annie's, too.
On Saturday morning Annie got her first random new can of food.  She kept coming out to wash up and then changing her mind and going back for a little more--over and over--until she ate the whole can.  [BTW--still no pooping outside the box since she got her big tub back--LOL!  *knock on wood*]
That afternoon I lurked in another Zoom bookbinding workshop that went from 3:30 till 7:15pm!!  They made a french door book.  I really like Kiala Givehand.  I stumbled across her years ago when she did a book a week videos on youtube.  I think they are still up there.
I finished the newest Handmaid's Tale (Hulu--had to work up to the new season--rather dark, shall we say) and Better Call Saul (Netflix DVD)...and other assorted shows and YT videos.
Then yesterday--Sunday--Annie gobbled down half the can of another brand of new food...and promptly barfed it all back up in three places...on the rug, of course.  Not sure if it didn't agree with her or she ate it too fast.  (Didn't give her a new one today--LOL!)
Anyways, Sunday was my day for a good long visit over at McFamily's!!  Liam opened his presents from Gramma. 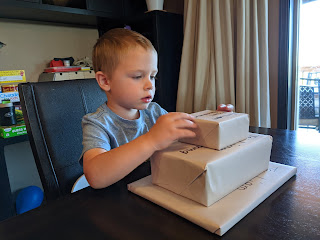 I could not for the life of me figure out anymore how to get an actual video on my blog so this is a link if you want to peek.

Blink did a kitty photo bomb during Leah's video and Dagan caught it--LOL! 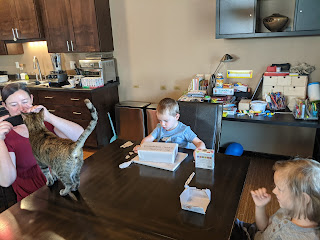 The boys love having bath bombs on bathnights. 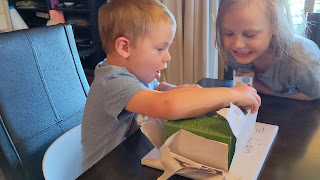 Anyways, after dinner they had cake and frozen blueberries and strawberries. 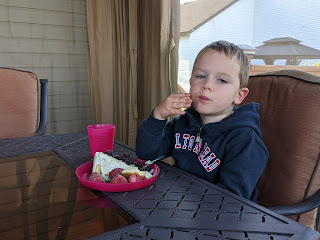 I told Ian he has electric hair like Gramma's.  Ian told me--you should see it after I've gone down the slide a few times--ROFL! 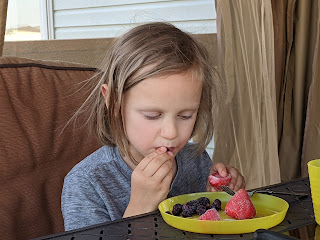 We had such a good time playing card games!  It is fun that they are getting old enough so we can all play together.  We played a game with the new polka dot numbers deck Liam got (several games you can play). 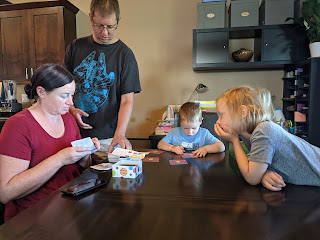 We played a game called Sleeping Queens.  That was fun! 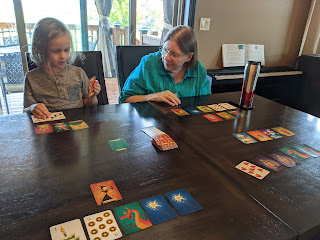 They did have a bath that night--and brought down a whole collection of the toys from inside the bathbombs to show me afterwards--strange sticky gummy things--LOL! 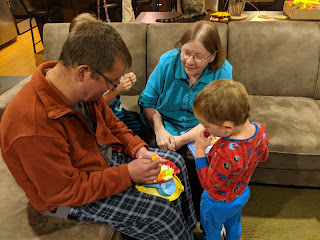 Took over three years before I got hugs from Liam, but he makes up for them now--lol! 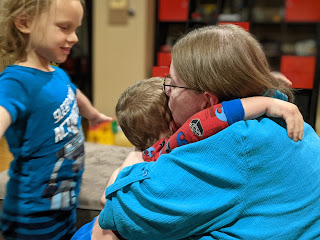 Later, after Laim went to bed we played My First Castle Panic with Ian.  There's also an adult version, Leah said.  Ian was up till 10:00!  I got a great long hug from Ian, too. 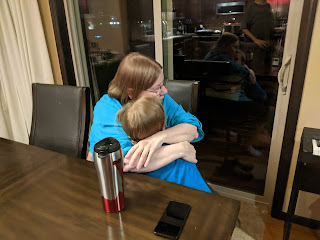 Note: Leah said that Ian really wanted to have Liam learn how to play Castle Panic, too--and so they taught him today.  Really good game to teach about teamwork and helping each other because you have to all work together to save the castle from the monsters.
After both the boys were in bed Dagan pulled out their recliner into the middle of the livingroom, we put on my Music To Disappear In CD, and Dagan and Leah did some Healing Touch on me.  Quite unexpectedly--after they had worked on me for a while--the "soulcomfort" energy just kind of kicked in!  That's the vibrating energy when I am working on other people that comes down into the top of my head and goes down through my body and comes out my hands and feet.  That's only happened to me while someone else was working on me one other time back in the late 90s.  It was absolutely awesome!  Might not happen again but I felt totally blessed.  GA must have thought I needed it--yes!  It is difficult to describe...but I have missed it.  Felt like coming home...like a piece of me clicked into place.  Oh, I cannot begin to describe it...but I feel so connected still today.  Wow!  Never expected that.  A gift!  A gift for my soul.
Anyways, when I got home (still smiling and floating on air) two packages were outside my door.  One was my new chemo bag, 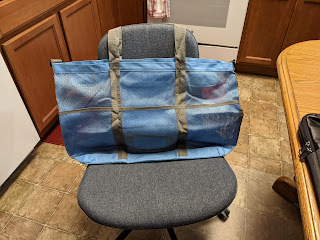 It also has a shoulder strap to clip on the sides--which I will use.  Big enough my prayer blanket should fit in there.
And the laptop sleeve came, too.  It has three zippered pouches--the big one for the laptop, one for a tablet, and one for a phone.  Pretty cool. 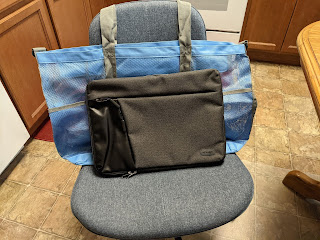 I had already received the set of zippered canvas pouches.  I'm pretty well set to fill my new chemo bag when the time comes. 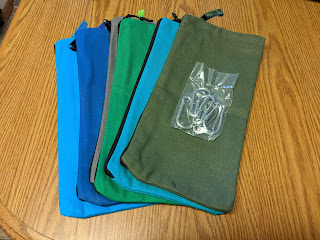 None of these were fancy, but cheaper and practical.  The kind that are easily replaceable if they wear out or a zipper breaks, you know?
Let's see...what else?
Oh, Leah hasn't gotten the school area together yet upstairs.  Still needs some items from IKEA.  Yes, she still has a pretty big IKEA trip coming in the future...250+ miles one way to Minneapolis--whew!  Right now they are doing school at the diningroom table.
Well, that's about it from here for this week.  On Thursday I see Dr. Kobrossy and I expect will then find out my chemo schedule--and want to find out if he is still as optimistic.  Should be.  :)  Until then--I have a couple more days off and Leah plans to come over for our Thursday night early--right after "our" appointment with Kobrossy--so she can maybe get home before dark.  :)  We had some sprinkles and the radar shows some actual rain might be headed our way--nice!
Enjoy your week!!
You're the best!!
****
Life is not about "or"--it is about "and".  It is magical and messy.  It is heartwarming and heartbreaking.  It is delight and disappointment.  Grace and grief.  Exquisite and excruciating, often at the exact same time.
Kristi Nelson
Posted by Rita at 4:43 PM