I took a picture of the blue and white sky yesterday and didn't even notice I caught a swallow flying by until I downloaded the photo into the computer. 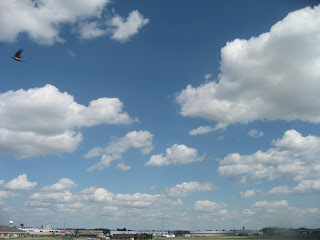 Only 85 degrees?  Karma took her long afternoon nap on the porch to avoid my puttering--LOL! 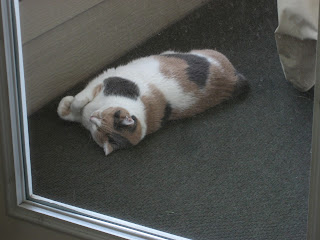 Tada!
It will look entirely different once my baskets and pencil boxes arrive...and I will probably still move shelves around some more...but at least I got all this clutter off my desk. 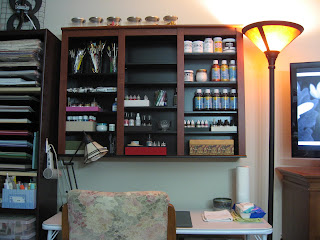 I have company coming!  My folks are coming up for their yearly visit this weekend.  Haven't seen them for two years because last year they left early when Dad found out he could get his hip replacement surgery. 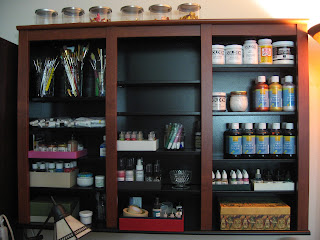 And--my sister, her son and his girlfriend, and possibly my brother are coming, too.  I haven't seen my brother and sister for must be around a decade.  My folks usually come up once a year for one night, but this time they're coming for the weekend.  A little family reunion!
****
Too many for my small place so we will have to spend most of Saturday over at Dagan and Leah's where they have more room and more places to sit.  Everybody but my folks will drive back to Minneapolis on Sunday.  My folks will leave on Monday to go visit a lady friend of theirs who lives out this way, too.  This has never happened since I moved up here in 1999!  Whoohoo!!  Anyways, that's another reason why I wanted to clear off my desk even though the baskets haven't arrived yet.  At least all that art stuff is in the proper vicinity.  ;)
****
Meanwhile--Moth Attack number two!  Awk!!
****
I decide Monday evening that I really need to clean my glasses and wash my face.  To set the stage... 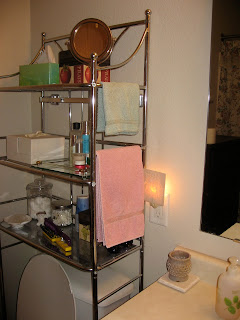 My routine is to grab the washcloth (you can see hanging above the hand towel) and toss it in the sink, quick wash my glasses under the water while it is warming up, dry my glasses on the towel, and then a quick face wash with the warm washcloth.
****
I have taken to standing back when I turn the light on in there.  I looked all around and didn't see any moth.  I tossed the washcloth in the sink, took off my glasses, started cleaning them under the stream of water...and whap!!  I got hit on the side of the face by that big old moth!  This time I must have made some kind of strangled sound because Karma came running to see what was going on.  And quite a show it was!  I was trying to swat at it with the wet washcloth--spraying water everywhere.  I saw it go down toward the floor--well, kind of, I can't see much without my glasses--and quick went to dry my glasses so I could see where it went...
****
Vanished!!
****
It came out of nowhere and vanished into thin air!!
****
I had the flyswatter, a paper towel, and a flashlight at the ready this time...but I looked everywhere and never saw a trace.  Karma had apparently missed where it went too or she would have been staring intently...well, or I was probably a more riveting, animated subject (crouching through the bathroom and hallway and bedroom and living room and kitchen examining every nook and cranny and opening every closet and cupboard door) for her undivided attention.  That's a feasible excuse for her not letting me know where it went, I suppose.  I seldom get that excited or move fast anymore, let alone slink about in interesting detective manner, so I imagine it would have been cat riveting.
****
Needless to say, but I'll say it anyways--another night where I had a heck of a time falling asleep.
****
Tuesday morning.
****
I go to wash my face--the usual routine, right?  Grab the washcloth, (yes, I'm showing you the scene again) run the hot water while I clean my glasses, dry my glasses, lay them on the counter, and go to grab the washcloth...

...and as I lift it up, even half blind without my lenses, I could see a big dark moving blob in the sink!  The moth!!  Trying to climb away from the hot water!  It had been hiding in my washcloth!!!  Awk!!  Instantly knew where it had come out of nowhere the night before--but this time it had gotten trapped too far under the washcloth to make a break for freedom, smack me in the face and escape.  I quick tossed the washcloth on top of it...squished it and flushed it down the toilet.  Whew!
****
I must have made some sharp breath intakes and noises this time, too, as Karma was silently observing the happenings from the doorway.  I am not a screamer, but I must make unusual enough sounds that Karma is right there.  Not to protect me, of course.  Just as an alert observer.
****
What grossed me out is that I had washed my face with that wash cloth the night before after the moth attack.  Eeeewww!!
****
I imagine it ended up in the damp washcloth after it had been attracted to my angel night light in the bathroom.
****
2012.
The year of the moths.
****
I know it is silly.  How can a girl who pet a wild wolf be afraid of moths?
****
When I was in fifth grade (Fridley/Minneapolis) we took a field trip to the Carlos Avery Game Farm.  They had cages with cement floors and tall bars (smaller than at the Como Zoo) with some different animals that were being temporarily kept there for one reason or another.  There was this wolf...we locked eyes...I could feel her loneliness.  Next thing I knew everyone had moved on down the line.  I ducked under the metal bar (that was supposed to keep you at a safe distance, of course) and walked right up to her.  Oh, she was so excited that I had come over...she danced in circles and then flew up to the bars and I reached in and scruffed her neck and she laid down on her side.  I rubbed her chest and neck with one hand while she licked my other hand as I tried to rub her head.  We were simpatico.
****
Next thing I knew the guide man's arms circled me and snatched me backwards away from the cage and up against that safety bar so hard we both almost tumbled backwards over it.  He was trembling and yelling at me.  This she-wolf was wild and had just been captured a week ago.  He lectured a lot more, of course, but that is all I heard.  No wonder she was so very lonely and unhappy.
****
I remember I didn't want to ever wash her stinky scent off my hands in her honor, you know...but she was stinkier than my dog.  I think I lasted two days.  Hey, I was nine--LOL!
****
And yet...ever since I can remember, my heart races and panic climbs up my throat over moths, wasps, bees...anything flying at my face.  Logic has nothing to do with it.  ;)
****
Bravery is sometimes only that there is nothing to be afraid of.
****
Fear can also be actually over nothing to be afraid of.
****
Have a happy Wednesday!  Dagan is stopping by after work and we'll have dinner together since Leah is in Seattle for work till Friday.  I wonder if I ever told him the wolf story...?  ;)
****
"Everything has its beauty, but not everyone sees it."
Confucius
Posted by Rita at 12:47 PM