Good time to put those bicycles away till spring.  Since they walked them to their garage, I don't think they were riding around on them. 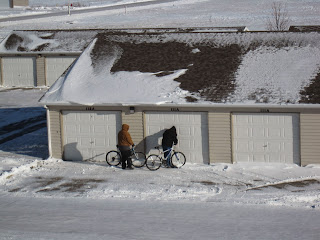 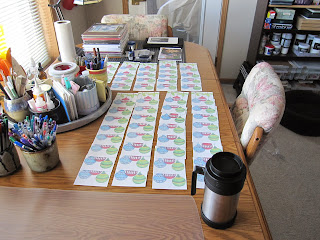 The days have been crispy cold--whether they have been dark... 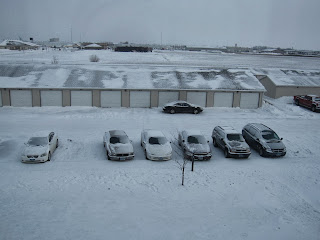 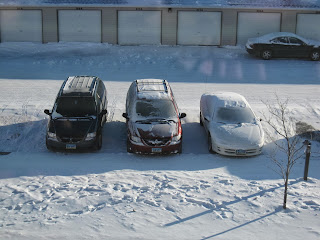 We've mostly been below zero.
Sometimes dangerously so. 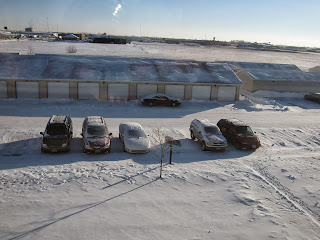 During my assembly-line process the table has been cleared off between embellishment additions to the card fronts.  A couple nights ago I was writing letters on a cardmaking break and needed to cut some more linen business paper in half.  (I use that for stationery, as many of you know).  I cut a nice big stack.  Then, since I've been out of my bookcards for months and I also use that paper inside of those, I grabbed my pre-cut cover papers, picked out some darker colors (for winter), and started folding.  Thought I'd at least begin the assembly-line process with the bookcards, too, while I was at it.  Ambitious me, eh?
****
Well, I was catching some dinner as I was doing all this...and--OMG!--managed to knock over my glass of soy milk all over the table!!  AWK!  What a mess!!
****
What is it with me spilling things lately?!  Remember my water container and the frig? Sheesh!
****
Luckily I am a neatnick, as you know, so all the Christmas cards were safely stacked away for the next round and I had moved all the cut linen paper away when I was finished with those.  But I lost about a dozen or more of the bookcard covers.  Could have been much worse.  I had soy milk on the bottom of my camera and timer--but they both work fine.  Whew!
****
Soy milk is just as sticky as regular milk, BTW--LOL!
****
Never fear!  I still had a lot of covers left. 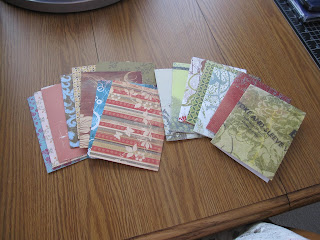 The bookcard assembly-line will be next after I finish up with the Christmas cards.  ;)
****
Meanwhile--cold, cold days. 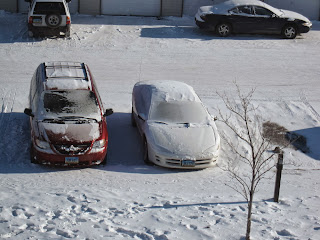 I hope we're not going to have troubles with the management not clearing off that sidewalk from the Fire Exit Door below my window again this year.  Last time it snowed they didn't clean off that sidewalk but, as you can see, people use it all the time and have made a footpath.  Time will tell.  And I will call and complain if they do this again in their misguided attempt to force people not to use that door.  *sigh*  I hope it was just an oversight. 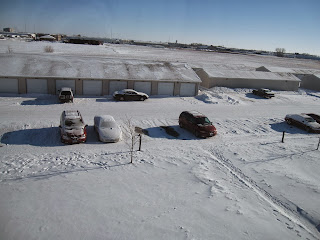 My December orders have started to trickle in.  :)
A couple of stamps. 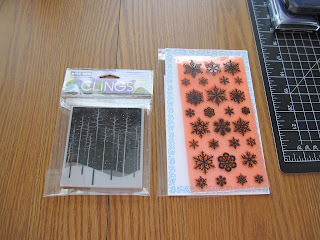 A couple more like the one on the left (the tree-scape) are coming that we can use for simple to make Christmas cards in the future.
****
Some glycerine for crafts/painting. 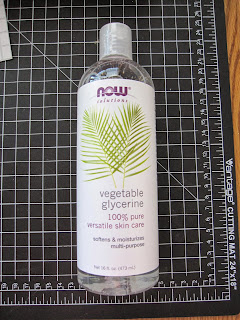 A big jar with a cool cover that I plan to use to make and house sour dough starter.  Don't laugh!  This may or may not work well.  I tried it many years ago but killed it somehow.  Either fed it too much or too little.  I even have a special whisk coming, too--LOL!  Maybe I can manage to keep it alive this time. 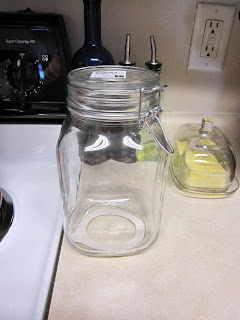 My new toaster!  It was frozen, so I left it in the box till it warmed up.  Didn't want my warm fingers to stick to it like that boy's tongue to the pole on It's A Wonderful Life--LOL!  (My favorite movie!!)  Oops!  That was in my second favorite Christmas movie--A Christmas Story!!  Thanks, Susie! 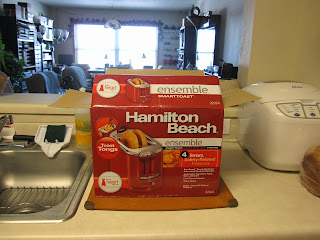 Doesn't it look good in my kitchen--all red and shiny?!  Smelled like burning plastic when I tried it, but it didn't burn my toast.  ;) 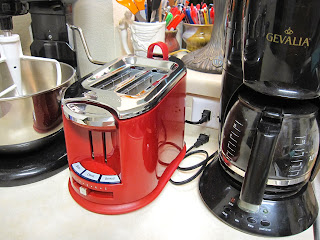 The Christmas card fronts went through three liquid pearl colors--one at a time. 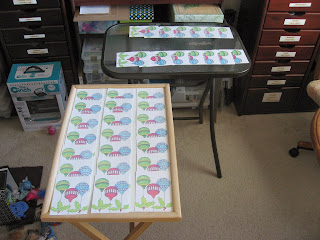 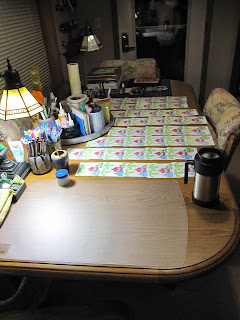 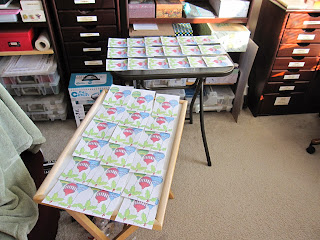 This morning I was able to gather and stack them all up for the last time--no more embellishments--tada!  Next is paper cutting and layering. 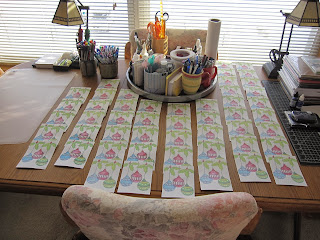 As soon as I put away the TV trays Karma reclaimed her sun bathing spot by her toy box mess. 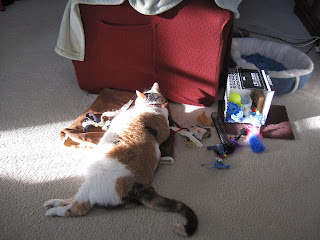 Sunny winter mornings are the best! 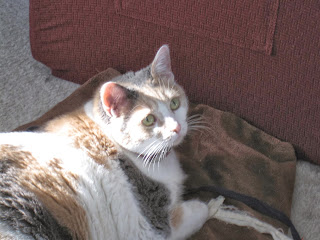 I love the way the snow sparkles like glitter!
****
Besides spilling all over the craft table...that self-same problem day...my TV computer started making a startlingly loud noise.  It was not recording anything and I didn't even have the TV on.  I shut it down, blew it out with canned air, let it cool off a few hours, and then started it up again.  Nope!  Loud whirring noise still there.  So I called my tech support (Dagan) who previously mentioned that he thought that computer was on its last legs.
****
Dagan asked me to feel if there was any air coming out of the side.  Faintly.  If I could stand the noise I could probably use it.  He'd find an old reject computer and set it up for me.  Since they were coming over Wednesday, I told him to wait till then.
****
Not 20 minutes later the computer started a new careening cry.  Obviously in even more distress, it was trying desperately to soldier on--but I felt no air movement from its hot little sides.  I put it out of its misery and shut it down.
****
Apparently one of those last legs is now firmly planted in the grave.
****
I have been watching Netflix streaming on the McLap.  I hope my tech support can get me up and running again tomorrow night.  ;)
****
It's a balmy zero degrees in Fargo.  The sun has disappeared as I have been writing to you.  I am heading over to the craft table to cut paper...smiling and singing Christmas carols.  Yes, I am annoyingly bright and cheerfully filled to the brim with holiday spirit from Thanksgiving till New Years.  Spilt milk and no TV cannot deter me--LOL!  This is the season of love, peace, goodwill, kindness, and joy.  I always pray that mankind will pick up that torch and carry it all year round...forever and ever!!
****
Happy Tuesday, All!!  :):)
****
"When one has once fully entered the realm of love, the world - no matter how imperfect - becomes rich and beautiful, it consists solely of opportunities for love."
-Soren Kierkegaard
Posted by Rita at 12:11 PM