Okay--for the past hour I have tried six ways from Sunday to get the picture Leah sent me of Ian getting ready to leave for his first day of preschool today off my cell phone to some place usable for the blog and I am absolutely, positively useless when it comes to technology.  I give up.  If I can ever post it, I will.  But before I smash the phone or my laptop...I'll just tell you Ian started Montessori preschool today and is in his first class as I am writing this.  He'll be going from 12:30-3:30 every day of the week and I think he will love it.  Our Friday Gramma Days won't work anymore so we'll have to see if most Satudays will.
****
Good news on the critter front.
The birds have slowly been returning this week!!  Flocks of sparrows have returned and lots of mourning doves for the past three days.  I've been feeding hungry birds again!! 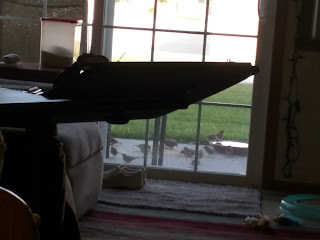 Even had a cottontail visitor on afternoon who pozed frozen like this behind my planter for about 20 minutes. 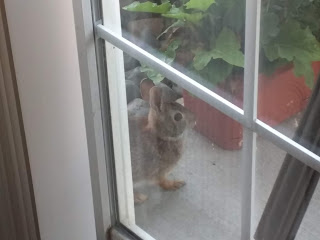 ****
The new bookcase.
I did get before shots, but there are no after ones yet because the box is still leaning against the wall.  Leah was helping her chiropractor paint his office this weekend on Sat and Sun.  But--here are the before shots (because you know I will forget at the time--LOL!).
****
The new bookcase is going to go in that back corner of the living room... 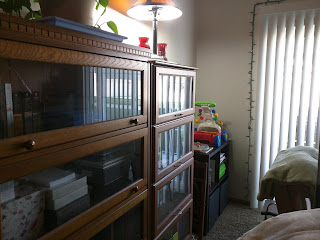 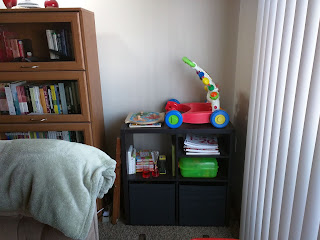 And the little cube bookcase will go in the hallway... 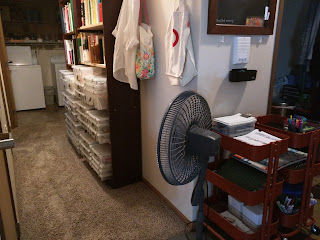 ...under the coat hooks rack. 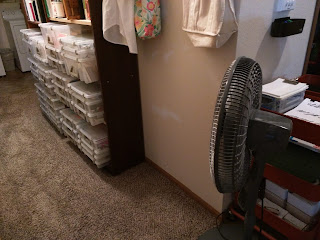 See all those satchels in the hallway.  After I get done in the studio those are next for cleaning and sorting.  That's all crafty stuff, too...and they all should be labeled.  I wouldn't take any bets on this all getting done before 2019--ROFL!  But you never know.  ;)
****
I have plans to reorganize this pen chaos I deal with every day.  Another before picture--LOL!  I'll show you that after it is reorganized, too--hopefully in September.  :) 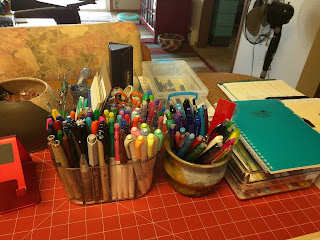 I guess I must be feeling better if I am at least mentally geared up for some changes.  ;)
****
Serena--I think you are right that I never posted a picture of my new pocket size cover for the field note size notebooks. 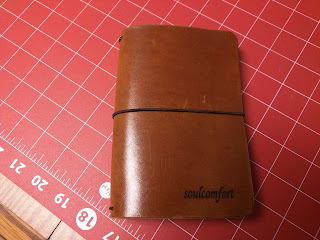 Monthly budget, wish lists, what I owe Dagan and Leah...all the money stuff I keep track of in here.  I've had it for months and can't remember now where I ordered it.  Etsy?  I do love it, though.
****
Oh and here's a couple white hairs on Annie's back--LOL!  One big one and one small one. 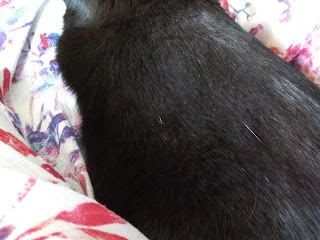 When I first saw these I thought they were loose and tried to pick them off--LOL!  She also has a really long hair near a paw--if it is still there.  I can't even remember if it was black or white now.  She's very touchy about her feet and legs.  If I ever get a chance to get a picture, I will.  ;)
****
How embarrassed would shy Annie be if she knew I was posting pictures of her--LOL!
****
Speaking of Annie...she spent most of the day yesterday hiding in either the panty or the bathroom.  We had thunderstorms with violent wind gusts that kept marching through one after the other.
****
Bad news on the flower front.
****
During one break I went out to rescue this planter! 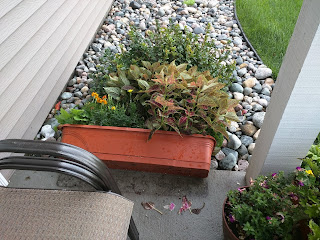 The entire planter got tipped over!  And it was not that light, let me tell you.
****
But the worst damage was done to the one on the other side where the wind was coming from. 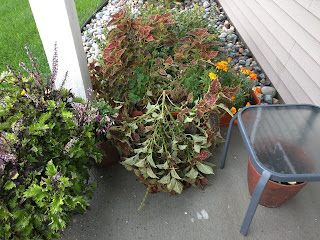 That coleus lost huge stalks!  Snapped right off!
****
So this morning I was out there cleaning up the damage. Amazingly, the tipped one barely even suffered any damage at all.  Kind of landed on top of the bush in the rocks behind it. 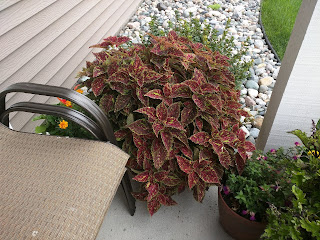 But the other side coleus has a huge gaping hole in the center of it now. 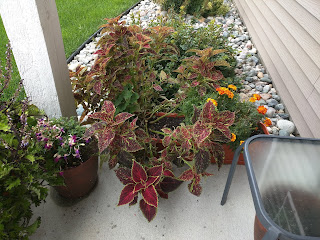 Lost seven stalks--six little ones and the huge center one. 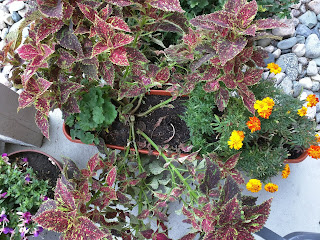 The front coleus that have been flowering for ages and the bees love so much... 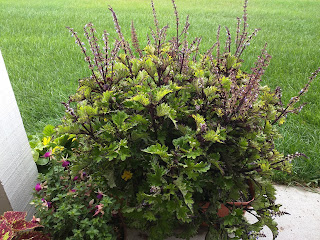 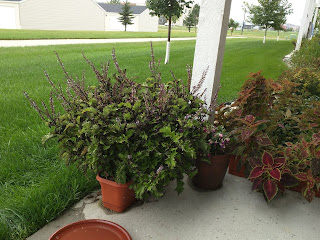 There were three bumblebees there this morning while I was filling two little grocery sacks full of broken and dead plants. 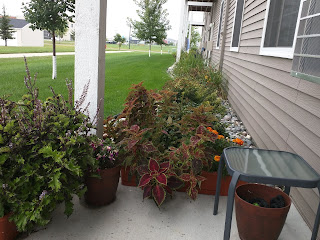 All the daisies bit the dust except for this one red one in the tipped over planter. 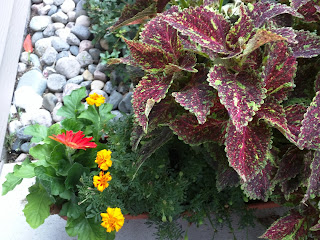 What amazes me is that these delicate looking fuchsias... 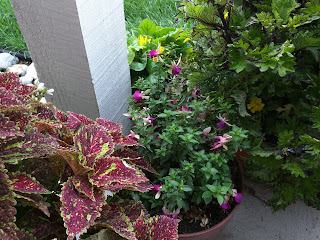 ...handled those wind gusts without being stripped of all those tiny flowers. 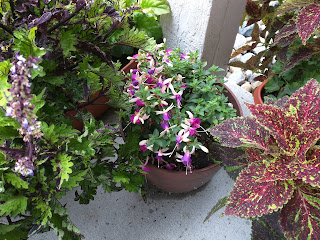 And look who was also back this morning--some grackles!  Now doesn't this look like normal again?  :) :) 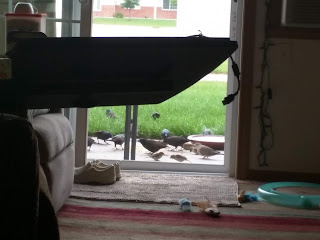 Probably only passing through if the grackles are heading south--but I never thought it would be such a delight to have the squawking seed fights and mass pooping on my patio again.  Yup--looks and sounds right and proper.  Annie is thrilled to have her CatTV working again--LOL!  Especially since it has been cool enough to have the patio door open at least part of the day.
****
Well, I had an extra long Gramma Day on Saturday since Leah was busy helping with that painting.  Ian and I basically just hung out.  Had lunch, went to the mailbox, watched some Maru the Cat, went to the garage to get bird seed, watched Cars3 (again--LOL!), and had dinner.  He found out there is a book to tell him words that mean similar things because he insisted he wasn't dawdling because it was called stalling...so we added a bunch of words he giggled at like procrastinate, lollygag, and dillydally.  He likes it when I look up things on the laptop, too.  He found out you can even hear how to pronounce words.  I just love the internet!
****
Ian was here really late for him (we were just having such a good time).  Since bedtime is normally around 7pm and Dagan was coming over around 7:30 to pick Ian up--well, he surprised us with an idea to try something we hadn't done before.  Daddy brought over Ian's bedtime stuff (pajamas, toothbrush, and storybook) so that Ian could get all ready for bed at Gramma's before he went home.  What a great idea!  I got to read him his bedtime story and everything.  I got mighty hugs and he left blowing kisses.
****
Ahhh!  The only thing as wonderful as being a parent is being a grandparent.  Everybody says it is better because it's only part-time and not full-time--LOL!  I suppose that is true.  But I loved being Dagan's mom...a lot.  Maybe because I paid such close attention--not knowing how long we had together.  The unexpected blessings have multiplied over the years.  Sometimes I still can't believe all of this is actually happening...as Daddy and Ian go down the hallway and I am catching kisses.  Who knew?  I confess--as I shut the door I wiped away a tear.  Joy can spill out your eyes.
****
Have a joyous week!!!  :) :)
****
"Don't cry because it's over, smile because it happened."
Dr. Seuss
Posted by Rita at 4:21 PM