On Friday I caught this glimpse of the sun peeking through a hole in the clouds. 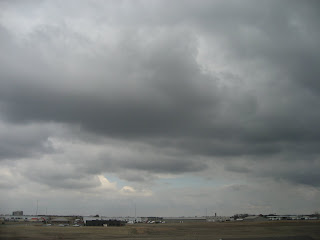 We've had a lot of rain off and on lately. Today is a sunny day but it's cooled off up here the last couple days. Only 39 degrees right now in the afternoon. 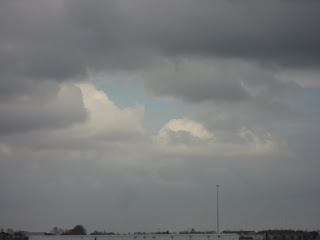 Before I forget, I wanted to tell you a fish story. These are the two tetras that are left in my little ten gallon tank. Their tails do have some red to them, even if it doesn't show much here. Black tips on the upper and lower fins and a hint of gold stripe under the top black tip. Do not remember what kind they are. If you know, please tell me. :) 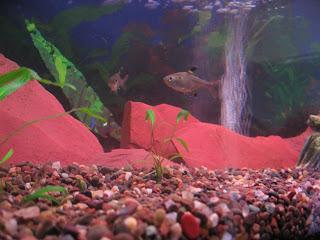 Anyways, there used to be five of these in the tank...a runt and four larger ones. The runt (on the left) was always shunned by the bigger gang, so it mostly hung around on its own in the tank all these years. Would try to hang with the big guys, but they blatantly ignored the little one. When the great heat wave killed off half the fish in the tank, surprisingly, little Runt survived. Only four fish left, but still the larger one chose to try to follow around the two bigger black tetras rather than hang with Runt. So, poor Runt was still alone while the other three were in their little clique.
****
Well, as you know, the two black tetras both croaked. One in the bucket while the tank was being cleaned and the other one shortly after discovering in the newly cleaned tank that his cohort was gone and there was nobody left but this odd tetra who had been trying to be their friend. Not any real company substitute for that last black tetra who was apparently much more devoted to his own kind. He freaked out and died.
****
Well, now that there are only the two tetras left--guess who suddenly looks like a good hanging buddy? Yes! Runt finally has a friend! For the first time in his long, lonely aquarium life, Runt has somebody to hang with. Makes me so happy. I am stopping in all the time to watch them. (Well, and to check to see if Runt has been abandoned.) Silly, but I am just so dang happy for Runt!! I don't think I'll buy any more tetras for Traitor to decide to hang with.
****
Funny. They never officially had names till now. Runt and Traitor. LOL! So, that's the fish story.
****
Meanwhile, Karma's new batch of grass started sprouting on the porch. I moved it inside because it was too short and Karma was pulling up the grass seedlings right and left. 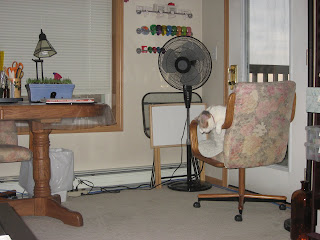 Caught her sneaking up on the table to chomp and pull... 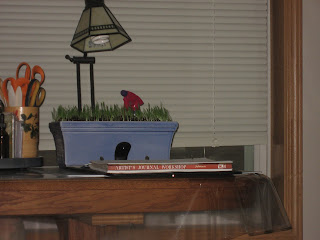 ...so I pulled the chair away. One thing about having a fat cat--they're too fat to jump from the floor to the table top--LOL! All I have to do is move the chairs away at night and she is handily thwarted. ;)
****
She fell asleep...pouting...hung over the arm of the chair. 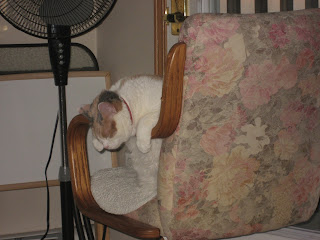 This was the following morning! Talk about shooting up! Grew an inch or two overnight! (You can see I have been busy writing cards and letters.) 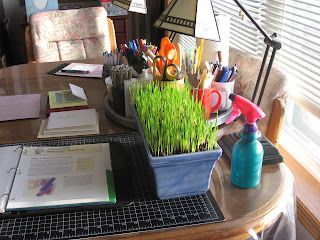 Karma catching some rays while it was still warm enough to have the door open. 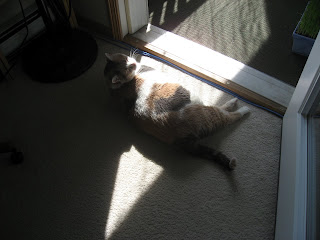 Okay, I also did get out the watercolors and attempt to paint the church. *sigh* 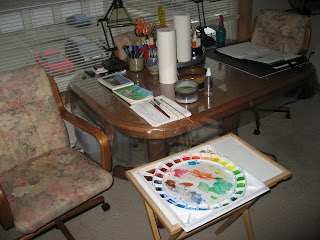 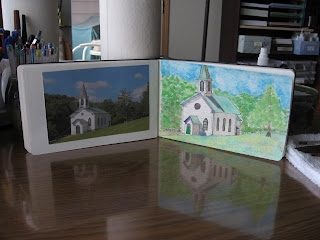 Just was one of those days where nothing worked right at all. I could still have tried to mess with it some more to fix the trees or something, but it was already overworked and--truth--I was sick and tired of it, to be honest. Done! Just supposed to be a sketch. I need to move on to lesson three. 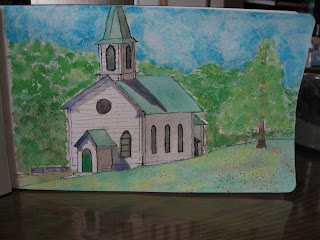 This morning...Karma has her grass to eat. She's happy. And it's inside because it could have frozen last night. (Crazy weather!) 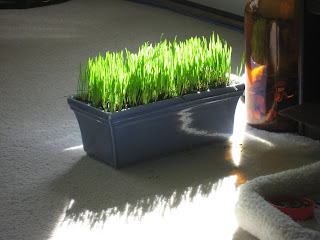 My dear friend, Ruby, is driving up next Wednesday on my birthday to stay for a couple of days!! Dagan and Leah will be by, too. We are going to order dinner and visit...on my actual birthday...whoohoo!! I'll be 61...and counting!
****
Smile! Hug somebody! Laugh!
Have a great day!
****
"We're all just walking each other home."
Ram Dass
Posted by Rita at 1:32 PM