Until a couple of days ago, most of the days were quite grey. 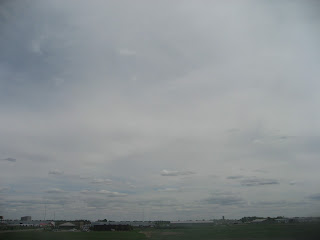 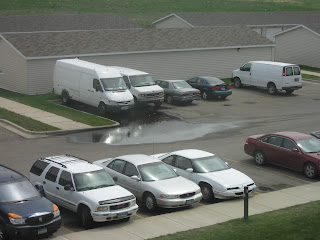 One night it was so chilly that Karma's cat grass fell right over. 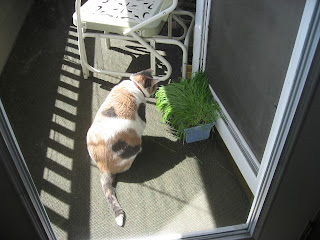 She seemed baffled.  Wouldn't touch it.  Just stared at it. 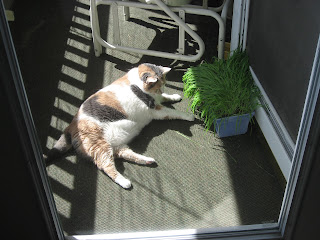 Dagan and Leah came over last Wednesday.  Leah wanted to work on the birthday gift tags and some cards, if you recall.  Dagan got here first.  Now, Miss Karma has been friendlier to Dagan and hissing less at people in general this year.  As long as people don't reach a hand toward her, she seems to hang around in the same room, keep her distance, and not run under the bed.
****
Dagan, though...well, he's recently been able to pet her (like I often do) with his feet.  She actually came right up to him and wanted some foot pets...and then she wanted to sleep on his foot as Dagan sat on the loveseat!?  Karma does this to me when I am writing at the craft table.  I took a picture to have proof of my anti-social cat trying to sleep on Dagan's foot--ROFL!  But if he had reached down to pet her with his hand she probably would have hissed and left.  Cats! 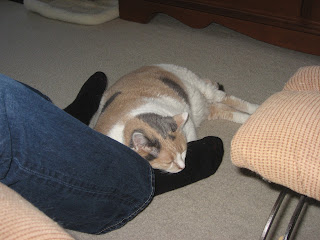 Of course, I forgot to take any other pictures.  Darn!  They didn't leave until after 11:30pm.  Leah worked on the crafts and Dagan helped me get set up so that I can order Amazon kindle books and read them on my laptop...and so that I can order music from Amazon, too.  Dagan and Leah said Google Play is easier to navigate and organize, so Dagan set me up with that, too, and transferred all my music there.  All--LOL!  My 2 songs and 2 albums.  ;)  I hope I can find all of this again.  Well, the Google Play is easy to find--I mean the Amazon programs.  (Cloud?)
****
Anyways, we had a really nice evening.  Been quite a while since they've been over.  They're very busy with new house stuff and cleaning and organizing at home.  :)
****
My Amazon order came!  New kitchen towels, dish cloths, and hotpad holders!!  More red accents in my kitchen!  :) 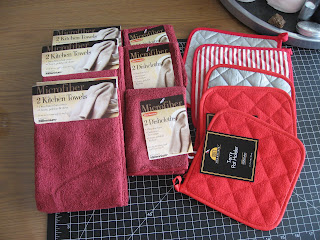 I know.  I get excited over all kinds of little things.  But my white towels have been grey for many years and my "newest" stained pot holder was about 9-10 years old.  I know the reds don't match, but I don't keep my potholders out and I just liked the spice red color.  Never have had microfiber towels or whatever they call them.  So soft they were freaky at first, but I've gotten used to them already.  Super absorbent!  Both the towels and the dishcloths.  Nice!
****
I had to chuckle!  I got a belated birthday card from Jeannie!!  So pretty!  (My birthday was March 28th.)  It really gave me a smile.  Thanks, Jeannie!!  :) 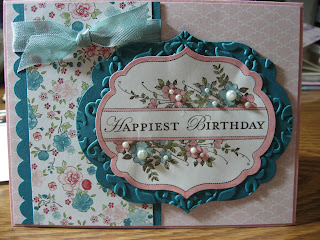 Mostly Miss Karma and I have been taking it easy.  I've been catching up on letters and made some cards, but haven't gotten brave enough to paint on that background yet--LOL!  Soon, I hope.  ;) 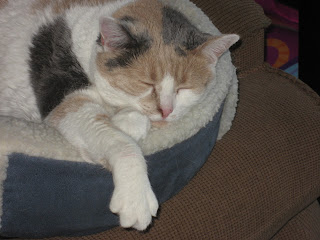 Saturday.
I was on the cell phone with my dear friend, Ruby, when I heard beeping.  By the time I figured out it was call waiting, saw it said "front door", tried to switch over and didn't know what to push on the cell phone and was still talking to Ruby, ran to the window to see the Country Greenery florist's truck, realized I was still in my nightgown and couldn't really do anything drastic like run out on the porch and scream across the parking lot...I was watching him walk away...back to his truck...with my flowers.  :(
****
So, I said goodbye to Ruby...and noticed a voice mail.  It was the delivery guy...who left a telephone number.  But, of course, I also don't know how to listen to a voicemail twice.  So I just looked it up in the yellow pages like a normal old fuddy-duddy would do and called them.  By this time a good five minutes or more had gone by and he was long gone.  They said they'd get ahold of the driver and he'd return when he could.
****
Four hours later he arrived with my gorgeous red roses!! 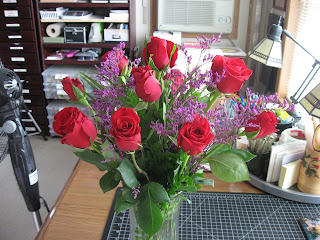 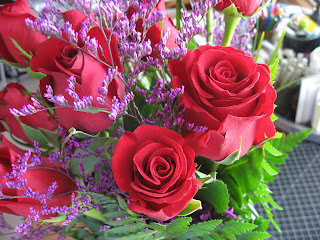 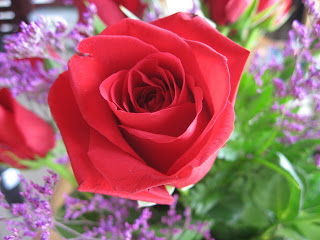 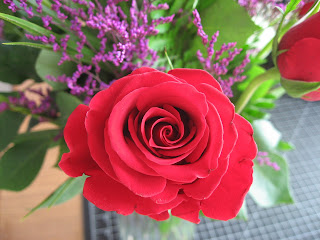 But the comedy of errors continued.
****
There was no note or card to say who they were from (even though I knew they were from Dagan and Leah), but I noticed printed on an insert "customer card enclosed".  I looked everywhere...no card.  I texted Leah and Dagan and thanked them for the roses...and added to Leah that I assumed they were from them even if there was no card or note.  (Leah usually sends a handmade card with them.)
****
Well, not only did they forget the card...she asked me--Did you get the plant?
****
No, I tell her.  You'd better call them.
****
So, I wait...thinking the mystery plant would be coming.  Can't call Ruby back.  Afraid to be on the phone because I am too inept to figure out what buttons to push for call waiting.  ;)
****
Finally at 4:30pm I decided to text Leah again...Did you get ahold of them?  Well, they had been at a movie when I had texted her and then she forgot to call.  So she left a message...they called her back...and she texted me that they'd come by tomorrow...on Sunday.  A day of techie tag.
****
It was a sunny, hot day again on Mother's Day--low 80s!  Notice Miss Karma in the door frame watching swallow shadows.  I have to watch Karma like a hawk or she's up on the table eating those tiny purple flowers.  I have to put them up at night where she's too fat to jump up and get to them--LOL! 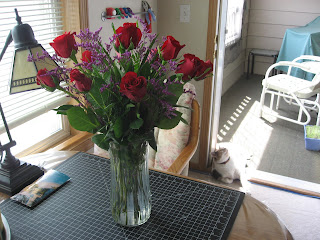 I waited for the mystery plant.  Took the phone with me everywhere...even the bathroom...so I wouldn't miss the call.  Karma and I hung out on the porch quite a bit. 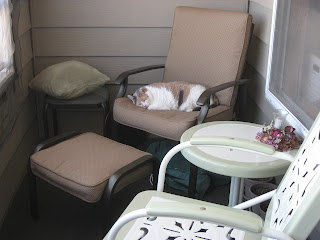 (They have to be totally swamped on Mother's Day weekend and they had to come to my place three times--LOL!) 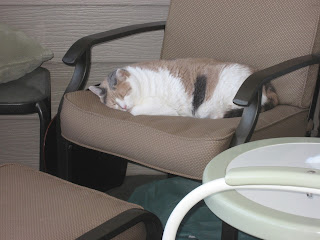 Didn't want to use the phone, of course.  Was going to shock my mom and call her--but forgot after the plant came.  Sorry, Mom!!  But finally in the late afternoon this beautiful miniature red rose plant arrived... 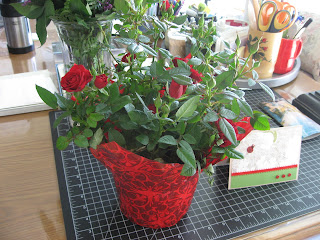 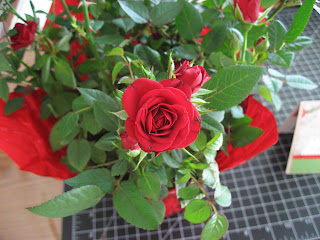 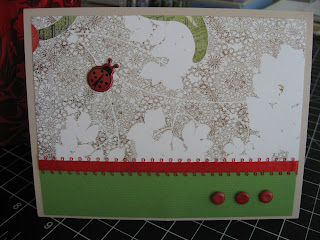 That was my Mother's Day weekend.  A weekend with no rain and 80 degree days--with predictions of the same for the rest of the week!  So, I am hopeful it will get drier around here and I will get back to "my" normal.
****
Yet, in my selfishness, I'm hoping it won't get too hot, either, so that I will be forced to turn on the air conditioning.  I know--the AC would dry it out in the apartment--so why not?  Well, if you were home 24/7 with the windows and porch door closed up the majority of the entire year due to either the cold or the heat, I think you'd probably want the windows open as much as possible, too, right?  Get while the getting is good, as they say.  ;)
****
I'm headed for the porch for the afternoon...to watch the swallows swoop and listen to the babies beg.  That is why I am not creating much art stuff...while the getting is good, you know?
****
Happy Belated Mother's Day!  Hope you have a fantastic week and I hope to be back to my normal blogging really soon, too!!  :):)
****
"Silence is the language of eternity; noise passes."
Gertrud von Le Fort
Posted by Rita at 12:54 PM