Good Morning!
I have a few older pictures of Karma.
Sitting between light and dark. 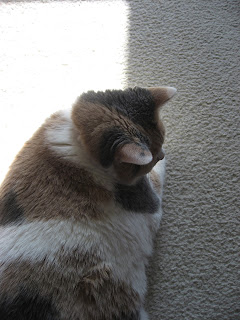 She's just so odd.  This is how she sleeps best...pushing her butt up against the chair and her head against the wooden arm.  Sometimes I look at her and I am convinced she was a dog in her last life. 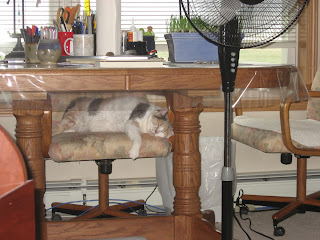 The birthday bag has remained interesting for some reason. 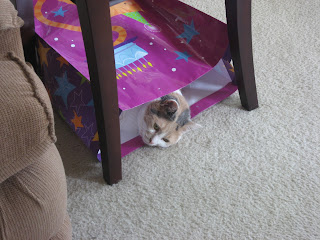 Confession.
I stuck the Bbag out on the porch under my chair yesterday--because it's just another interesting spot--but I forgot it out there.  We had a whopping thunderstorm last night.  I haven't checked yet to see how the Bbag survived.
****
Don't tell Karma.
****
I go in streaks with everything it seems.  The past week or more I have really been into writing letters. Day before yesterday the Circle Letter arrived!  Perfect timing, eh?  Last I mailed it off was mid-December.  There are ten of us, so it takes a while to make its way around.  Third time I've had the letters.  Fun getting to know all these ladies from around the country.  :)
****
Okay, let's see...oh, yah...Zines!
I did google zines and it was very interesting.  Basically they are handmade, original, non-profit pamphlets.  From what I could find, there's usually one author and no more than 500 copies are made of the original zine.  They've been around for a long time but were big in the 60s.  Back then they were usually black and white (or that blue mimeograph color--LOL!).  You could say whatever you wanted--uncensored.  Being able to talk about the Vietnam War or sex was very appealing during those days of the underground newspapers and all.  You could make it yourself and hand them out for free or sell them at cost so you could make some more.  Looks like there was a lot of cutting and pasting of typewritten word being rolled off in the 60s.  I can't believe I never heard of these back then--it's so hippie-perfect!
****
Anyways, apparently they've changed a bit since the 60s.  Today we have home printers and copy stores!  Actually is a lot easier to make a zine these days, I would think--or at least to mass produce them.  Artists have gotten into making colored Zines, too--but black and white is still cheaper to copy.
****
Seems that more people are trying to make a little profit off of them these days, too.  Instead of charging just to cover costs I have seen them for upwards to $12.00 and even more.  They can look quite professional now with all the home computer programs and the quick copy stores.  But you can still get some very handmade looking zines for 1 to 3 dollars and most are under 6 or 7, I'd guess.
****
The variety out there is amazing!  There are still political and sexual content zines, of course, but there are fantasy, comic, poetry, personal stories, art, and fan zines to name a few.  It's hard to tell what you're getting when you're buying online unless they show a sample of a couple pages.  Some people have serial stories going or whole invented worlds--quite something!  Freedom of expression at its best.  There are apparently zine stores around the country and people who are zine collectors.  I really didn't know any of this existed!  And there are really no rules I could find except that there be less than 500 copies of an individual zine.  I guess if you have more sales than that you have morphed into a proper magazine, eh?  LOL!
****
Interesting fact I heard on CBS Sunday Morning--1 out of 7 or 32.7 million Americans live alone.  17.2 million of those are females and they fare much better on their own than most of the men do.  Men are more likely to report that they are unhappy or lonely.  They were saying it's the biggest shift to American households since divorce became commonplace (60s?).  I'm part of the new trend--LOL!  A contented, happy female living alone.  ;)
****
We had a pre-inspection of the apartments yesterday by the building owners.  In June we have the federal inspection for the building (to keep its subsidies, I assume) and they wanted two weeks to have time to dot their Is and cross their Ts.  Anyways, Tahnee from the office came to check my place.  The dryer flap was pounding--fairly softly in the afternoon wind--but she got to hear it.  Even in the few minutes we stood and talked the pounding was annoying her.  She starred my dryer flap complaint!!  I hope they can figure something out.  It's been seven years, people!
****
AND--I had time to really talk with her about the dog!  The dog is not even out on the balcony!!??  It's apparently inside the apartment!!!!  She says they kennel the dog while they are gone (maybe destructive?) and it just cries the whole time.  But the dog has food and water and all that.  I couldn't believe the dog wasn't outside.  We all thought it was because it is so loud!  They leave their windows open, I guess.  (How good is that for the woodwork!!!)  The kennel is near a window.  So, there you have it.  And they are supposed to be gone by the end of the month.
****
We had a raging thunderstorm last night.  Karma decided to sleep with me--LOL!  The parking lot puddle is huge again.  Why do I mention the PLpuddle so often?  Well, I think of it as my own personal backyard bird bath.  ;)  The birds just love it.  The water is fairly clean, not muddy, and it's been there pretty consistently all spring whether large or small...like a big bird bath.
****
Have a super duper day, my friends!!  :):)
****
"The more alert we become to the blessing that flows into us through everything we touch, the more our own touch will bring blessing."
David Steindl-Rast
Posted by Rita at 10:44 AM