We're taking Karma in to the vet today.
Obviously, I can't sleep.
****
Tuesday I noticed red blood smears on the tile floor where Karma had been sitting to drink her water.  I cleaned her off with a wet paper towel and emailed Dagan and Leah about their vet.  Truth--Miss Karma hasn't been in to a vet since she was spayed and declawed with she was a kitten--Dagan and Leah like their vets so I wanted to bring her there.  Karma hates leaving the apartment, as you know.  She howled at the top of her lungs in the car--the entire trip--every time--usually threw up, too.  She never goes in the real outdoors or is normally around anyone but me so she's not exposed to many dangers in her life. 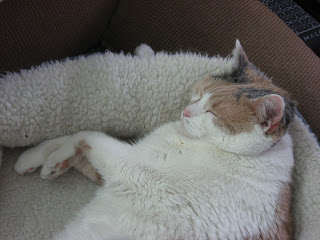 Anyways, I had barely sent off the email and Dagan called me, told me the name of the vet clinic, I looked it up online, they were open later till 7pm on Wednesdays (we could be there a little before 6pm) and Dagan has a half day on Friday, has an appointment to bring the car in, but should be free about 3ish.  So, armed with that information, I called.  The receptionist talked to the vet and being as there was blood in urine or bowels (hard to tell with cats) but seemed to have stopped (just pinkish when I wiped to check--and has been since then) they didn't want to see her that late in the day.  So we made an appointment for 3:30pm today.  And I have been keeping a close eye on her in case she needed to go in to emergency.
****
She's been sleeping a lot, is drinking quite a bit of water, is peeing and pooping--but she's not been herself.  Listless.
****
This was last week.  I did a water change in the fish tank and Karma remembers the days when I had a 30 gallon tank and used a Python to clean the tank (where you hook the long tubing right to the sink for emptying and filling). 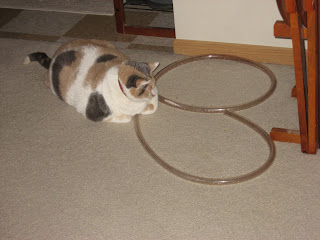 Karma was alertly waiting for the water to come surging through the tube.  She loved to follow little pieces of plant all the way along the floor--trying to catch them.  It was funny to watch her jerking her head and "imagining" she saw things moving in this empty tube.  :) 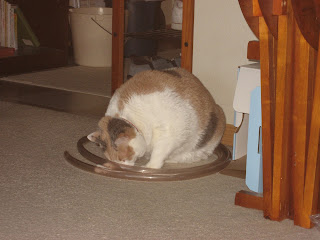 Well, I don't want Karma to be afraid of her stroller, since it took a long time for her to trust it.  Plus, she used to barf almost every time she was in the car and plastic and a towel are easier to clean.  So I went out to the garage a couple days ago and brought in her old carrier and put an old towel I have used for art stuff inside.  Karma has obviously forgotten all about going to the vet when she was a kitten. 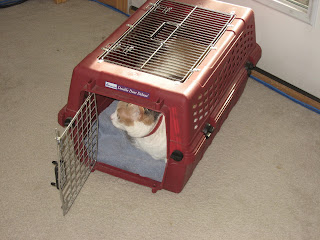 She went right inside and took a nap. 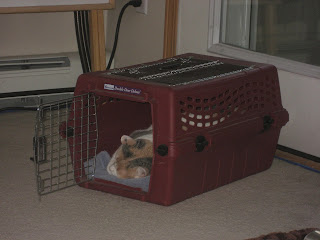 Dagan will have to come up and carry her down to the car for me.  That is why I got the cat stroller years ago--too hard for me to haul 20 lb Karma down three flights of stairs when the fire alarm goes off.
****
She's been sleeping a lot--even more than her usual. 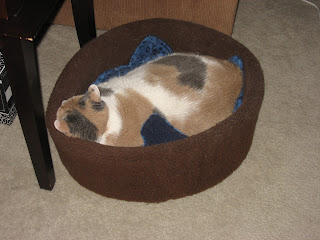 May be another reason why she went off the heating pad again--if she's running a temp, which I think she probably is.  She's been feeling a little warm and laying more on the chilly floor--even asking to go out on the freezing porch a couple times a day.
****
I am praying it is that cat urinary infection and she'll be fine once she gets antibiotics and such.  I have dropped off the grid, in case anybody wondered where I've been this week.  I promise I'll post and let you know what we found out at the vet later today.
****
Saying a little prayer for Karma would be greatly appreciated.  I dearly love Miss Crabby Pants.
Posted by Rita at 4:44 AM

She is certainly in my prayers right now. I am also hoping it is just a UTI. And oh, how cute she is jerking her head at the imaginary things traveling through that tubing. Will look forward to reading your post after the visit~

How sad. My prayers are with you. Miss Crabby Pants will live on in your thoughts even if the worst happens. Every day I send blessings to those who have lost a loved-one. Let's hope she comes back restored to her former self.

Oh no! I hope they find out what is the cause of Karma's problem and can easily fix it. It's so hard to see our furry loved ones in pain and not themselves.

I'll be thinking of Karma today and hoping everything goes well at the vet. Hopefully she will be back to her normal and inquisitive self before long.

My best thoughts and prayers are with you and dear karma. Love you, dear lady.

Prayer said for sweet Karma and for you too Rita.

I'm praying for her and you, friend. *hugs*

Am saying a prayer for Miss Karma. Hopefully it is just a UTI and she will be back to her old self soon!

oh poor Karma and poor you Rita!! We do love our furry pets so much and they are so much part of our families; will say a prayer for Karma and that the vet can figure out what is up with her.

let us know when you can

i know how much she means to you and how worried you must be. i stress out completely when i have to take my pets to the vet, so i understand that too. bless you.

Oh Dear!!! Please do keep us posted. It is so hard because our pets can't tell us what is bothering them. I sure hope she is doing OK!!! They may want to give her shots though, so be prepared for that.

BIG HUGS from All of us to Karma ( and you too!! ). Fingers and paws are all crossed waiting to hear how it goes. I totally know what you are feeling right now so chin up, deep breathe and though I can say "dont worry till there is something to worry about" we both know you are beside yourself with worry anyways. Positive thoughts blowing across to you! With all the love and support you have here there is no way it wont just be something small and simple. Think of you all. *hugs* =0)

I know how this feels, to worry about your beloved pet. My prayers and thoughts are with you and Karma! sending hugs from the hills of North Carolina ♥

Oh, I am so sorry to hear that dear Karma. Is sick! Please be sure to let her admirers know when she is diagnosed and home again. Sending you both big hugs and, yes, prayers.

I'm wishing for the best for you and sweet Karma!!

Very wise of you to help her get used to the carrier. I'm praying for you and for her. Let us know, please, how she is when you're able. I know the trip will be exhausting for you.

what a stressful time when our 'little ones' get sick...
but at least i know, since i'm heading backwards, as usual...that karma will be fine after taking some antibiotics for a bit!
what a relief!!

hang in there rita!!