A quick hello to let you know that we are still alive and kickin' up here in Fargo.  We've had a lot of dark winter days...occasionally with a little snow.  The roads have been icy. 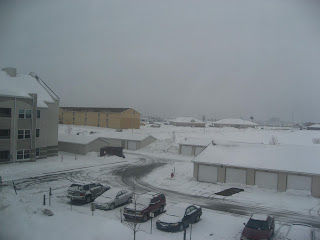 The world looks so clean and fresh after a thin blanket of snow settles over the earth...even on an overcast day. 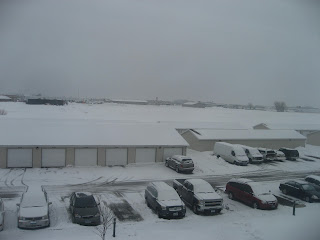 Karma's been sleeping a lot still. 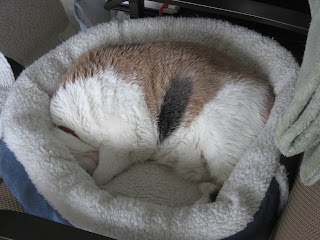 The antibiotics have upset her whole system.  Poor Karma hasn't had a normal poop for about a month and a half. 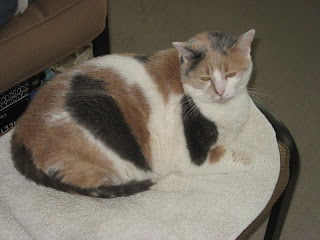 She wouldn't touch any food with the probiotic powder in it no matter how little I added.  But then she wasn't eating much in the first place. 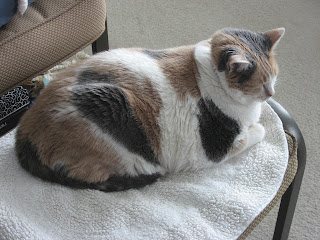 Dagan suggested I mix the powder into some peanut butter and smear that inside her mouth so she had to eat a little of it, anyways.  I had some almond butter, mixed up a runny paste, and have been using that to hold her pill on my finger instead of the canola margarine--and Karma apparently likes that better...or she's just given in to the pills being part of her daily life. 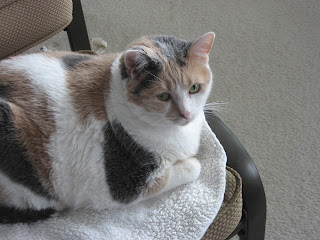 I ordered different versions of probiotics, too--as suggested by the clinic when they called.  The vet tech suggested a probiotic gel in a syringe applicator that they don't carry but is sold on Amazon.  I tell you Amazon has just about everything--LOL!  I also found probiotics for cats in a tube, UTI treats, and a liquid.  Not much has arrived yet, but I am expecting the rest today and tomorrow.  She'll need supplements for quite a while to get her system back to normal.  The vet said it wouldn't hurt her to give her some probiotics off and on even after she's off the antibiotics and back to normal bowels.
****
Meanwhile, I have towels on every chair but--since I've finally been able to get some probiotics down her--this past week there hasn't been as much mess or dirty butt cleaning around here.  Hurray!  She spends most of her time in her blue cat bed, though, or on the ottoman (covered with an old bath rug).
****
At the beginning of the month people moved in right across the hall.  It sounds like we are living next to some kind of mini group home.  They have installed a door chime (I don't know if those have a proper name of some kind) that goes off every time that door opens and there is a lot of activity round the clock seven days a week...younger people working shifts is what it appears to be.  I feel like I am back working at the small pet shops--LOL!  I used to hear that two-note door sing-song in my sleep!  You listened for it all day long to hear if somebody came in the store and heard it every time someone left.  I am not sure who they are keeping track of over there to make sure they don't sneak out unnoticed, but they have somebody there with them round the clock as far as I can tell.  I got used to the crying door sound within a couple of days since it is a part of my memory...but the door chime and all the people in the hallway coming and going certainly still has Karma's attention. 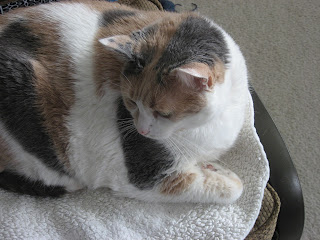 When she is awake her ears are often pointed toward the door. 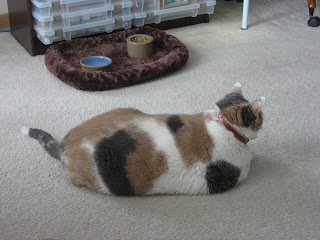 At first it really frightened her and she'd get up and run and hide under the chair, but now it has become more of a curiosity and doesn't wake her up anymore.  This used to be a quiet spot down here at the end of the hallway.  Now--not so much--LOL!
****
Anyways, Karma will finally be done with her month of antibiotics on Thursday and we have an appointment at the vet's for Friday afternoon.  Dagan is taking us and I am praying Karma gets the all-clear on the UTI this time so she can get off these pills and start to feel more like herself.
****
Myself--the new recliner is helping my lower back, but I am still in a fibro flare.  It has lessened some, but is still my constant, relentless companion.  When I say my body is a stress barometer--I am not kidding.  Even when I think I am doing just fine...my body and my subconscious have become the best of friends.  ;)  I am obviously still more worried about Karma than I think I am--and probably won't start feeling truly better until after she gets a clean bill of health on Friday.  Not to mention there have been other emotional issues to deal with, too.  But I really am doing okay.  Consciously.  Honest.  :)
****
Leah is planning on coming over tonight to work on her sister's baby shower invitations.  I actually finally felt good enough to sit and work on putting double-sided Scrappy Tape on the backs of some printed paper strips for the cards yesterday--tada!  That is the first crafty thing I've done in must be 6 weeks or thereabouts--whoohoo!  Light at the end of the tunnel, eh?  Just doing the usual daily tasks has been plenty with this flare up, so I hope to see more improvement.  (And I do think even my subconscious will stop worrying if Karma checks out okay on Friday--which I consciously think she will--LOL!)
****
Meanwhile, I have been watching a lot of Netflix, of course.  Finally saw The Hunger Games (better than I thought it would be), the first disc of the first season of Homeland (ditto-I will order the rest of it to see what happens), season one of Titanic: Blood and Steel, and then Downton Abbey, of course (what can I say--LOVE it!).  Strange little movie I liked--The Giant Mechanical Man.  And I went back and watched the entire Seven Up series through 49 Up, because 56 Up will be coming out this year.  I have been watching it over the years on PBS.  Fascinating!  They've been following these British kids since they were seven in 1963--every seven years they revisit them (if they agree to it, of course).  A violent movie chock full of twists--Deadfall.  And for fun and giggles--Happily Divorced (but Netflix only carries season one?--so I'll have to find it online someplace because IMDB says it's still on the air two years later).
****
Just wanted to let you all know that Karma and I are both doing okay.  I absolutely will let you know what happens at the vet's after our visit on Friday for sure.  I have still barely been online.  This forced blogland break has been going on now for such a long time.  Miss you guys!!  Thanks for all your prayers and caring about us.  Hope things get back to normal around here pretty soon.  If I'm not back before then, I'll post after Karma's vet visit.
Bless you!!  :) :)
****
"Be still, and the world is bound to turn herself inside out to entertain you.  Everywhere you look, joyful noise is clanging to drown out quiet desperation."
Barbara Kingsolver
****
Note on the quote: don't worry--not feeling any quiet desperation--just love the clanging joyful noise part.  ;)
Posted by Rita at 12:36 PM

glad karma is doing better, finally! i hope she gets a paws up approval on her follow-up vet appt. :)

Wondering if one of your new neighbors has Alzheimer's Disease. That would explain the door chime, an alert to wandering.

So happy to see your post. Wishing you and Karma better days soon!

I'm so happy to hear that both you and Karma are doing better. I've been thinking about you. ☺

Hope both of you are better soon!!

Glad to hear that she's beginning to improve. We always worry so much about our kids.. human or furry. I hope all new will be wonderful on Friday. Look after your own self too!

I'm so glad to hear that everything is beginning to turn back to normal, if not actually already there. I saw 56 Up last week and enjoyed it tremendously, not having seen any of the previous ones. Amazing! :-)

Tell Karma not to feel self-conscious. I made a change in what I eat and I haven't had a "normal" poop in about six weeks, either (TMI). I'm glad you felt well enough to be craftsy for a little while. Hang in there and God bless you all!

I'm glad both you and Karma are feeling better. I hope she gets the all-clear at the vet's on Friday so you'll have a little more peace of mind. *hugs*

I will be waiting to hear the report on Friday..poor girl has to be over it this time. I am sure you are stressed..and with good cause too.
I hope things settle down for you soon.
New neighbors..that are dingy..LOL..that was a funny:)

I've been wondering about you! Glad that you and Karma are feeling better. Sounds like you have some interesting new neighbors there. ;)

Always good to see a note from you! I'm glad Karma seems to be improving - and hope your flare has subsided - you've been under a lot of stress lately. Hugs.

My thoughts are with Karma. I hope she is truly better on Friday. She's been sick so long, it would be good to read she has a clean (so to speak) bill of health.

Reading about your neighbors and their noises reminded me why I could never live in an apartment.

Do kiss Karma and tell her how much we all think of her.

Glad to hear you and Karma are both improving - slowly, but surely. Good to see a post from you