Good Morning!
It doesn't matter which bed is on "her" chair--Karma spends most of her time in her very favorite spot. 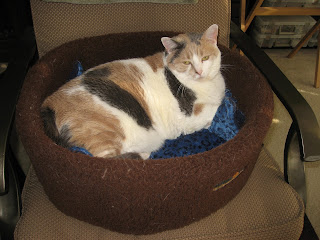 I took a smaller planter to grow some cat grass for her and she's been nibbling a little. 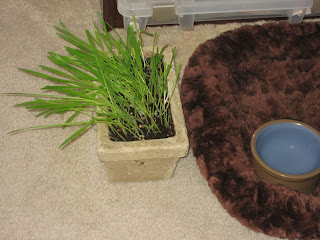 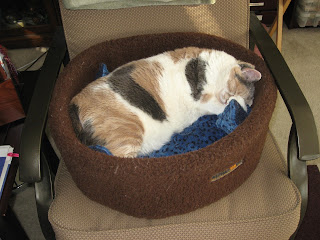 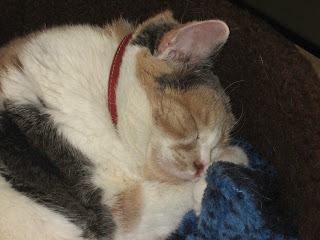 Or she's wanting, in no uncertain terms, to be up on my chest for a cuddle.  Karma hasn't realized it yet but this is her first pill-free day in a month--tada!
****
There's been a change in plans, though.  We are not bringing her in to the clinic tomorrow.  The vet called and suggested, since Karma was so traumatized the last time she was there, that we try doing the urine beads (I call them pee balls--LOL!) in her cat box to get a sample.  That way she wouldn't even have to come in at all--plus she might possibly freak out and pee out any sample they might have gotten as soon as she realizes she's back at the vets, anyways.  I was happy about that and hope it works.
****
The sample has to be dropped off within 48 hours--preferably 24.  So--Dagan is going to go pick up the urine beads on Friday.  Since the clinic is closed over the weekend and he has to come over Tuesday after work for a pacemaker check anyways (I have a land line and cell phones don't work on the pacemaker machine), he'll bring everything over with him on Tuesday.  Plus, the vet clinic is only open later on Wednesday and Thursday, so then he can drop the sample off after work when I have one--hopefully Wednesday.
****
I cannot shut her in the bathroom or the bedroom as many people would do.  For one thing, you know how Karma is about change in her personal life--and she yowls and howls with great enthusiasm and volume when she's upset.  (Just ask them at the vet clinic--LOL!)  Using another litter tray--well, I'd also have to go buy one to have one in another room.  Karma is used to her privacy... 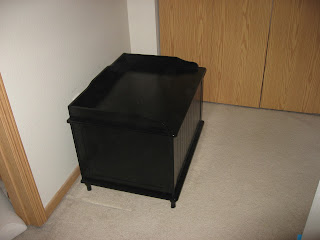 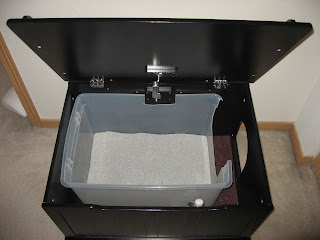 And the reason she has such luxury in the hallway in the first place is there was not really anywhere else to put a cat box in my small, jam-packed apartment.  So I have to hope she will just use her box normally even if it won't have "her" normal litter in it.  It's our best bet for getting a stress-free sample, that's for sure.  Karma is the most opinionated, persnickety cat with attitude I have ever lived with.  Her reactions are always hard to predict--well, face it, beyond comprehension sometimes--LOL!  Think positive, right?
****
But that means--if all goes well--I won't know until probably next Thursday.  More waiting.  But Karma's done with the pills, anyways.  Hurray!  She's been moody about taking those, too, of course.  One time she puts up a twisting struggle--occasionally biting down hard enough on my finger to draw a pin hole of blood--and the next time she may be placidly cooperative. ??  The perpetual mystery of the Karma mind.  Anyways, I'll let you know.
****
Meanwhile...Dagan and Leah were here last night.  Leah worked on the baby shower invitations for her sister.  Dagan ran the SpotBot (rug cleaner) for me again and even made dinner for us and cleaned up the kitchen afterwards.  I am still not in the best shape, but what little extra I can manage to do--I am helping work on the cards for Leah, so I am still not on the computer much at all. 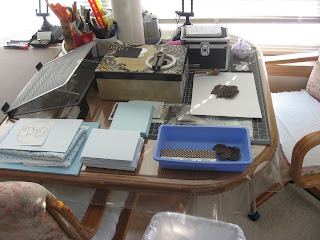 They plan to come back tonight and during the day today I am working on punching out all the tiny pieces in these cute baby buggies Leah was die-cutting last night for the front of the card.  (Her sister is expecting a boy so the cards are in a blue and brown theme.) 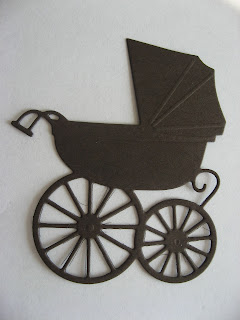 Lastly, I have some wonderful news that couldn't have possibly come at a better time!  Dion Dior was giving away on her blog a membership to the 21 Secrets Workshops over at Dirty Footprints Studio--and I won!!  See details here.  Dion is one of the teachers for one of the 21 classes and--truth--I thought I won just the entry to her class.  I was already so excited--but now I think I won the whole 21 classes!  If you click on that last link--well, it looks like I won the whole shebang!  Dagan and Leah thought so.  Wow!  You can access all of the art classes 24/7 from April 1, 2013 until Jan 1, 2014.  As you can see on the link, most of them have to do with mixed media and art journaling--whoohoo!  What a wonderful gift!  And it's even my birthday this month!  Something to lift my spirits for the rest of the year!!!  Wow!
****
Now--I just need to get to feeling well enough to play, right?  It's coming!  I'm able to do a little card helping right now...so art play can't be too far behind once we get the shower stuff done.  :):)
****
Have a wonderful weekend.  It feels good to even be able to blog and it not do me in for the day.  ;)  I am off to poke paper pieces...
****
"An optimist isn't necessarily a blithe, sappy whistler in the dark.  To be hopeful in bad times is not just foolishly romantic.  If we remember those times and places where people behaved magnificently, this gives us energy to act and at least the possibility of sending this spinning top of a world in a different direction."
Howard Zinn
Posted by Rita at 11:40 AM

i hope you can collect her sample and she'll be none the wiser!

I was hoping by now that you and Karma both would be feeling so much better.

I hope the urine beads work.

Karma sounds like a couple of my employees!!
I do hope she is okay. She does sleep a lot normally though. Hopefully you get answers soon.
How cool about winning the classes!!
Congratulations!
I hope you are feeling good soon!

I'm so similar to Karma. Persnickety, sleep a lot, doctor can't get a urine specimen from me because I howl and pee myself. Poor Favorite Young Man nearly loses his mind when he has to load me into his Porsche and take me to the doctor. Boy, it's good to hear from you, and I'm so glad you're able to help with the invitations. I know it makes you happy.

Good luck with Karma. And I certainly hope you feel better soon, Rita.

Good luck with Karma and getting the urine specimens. I hope everything works out as planned.

Congratulations on winning the classes. Sounds like something you'd enjoy. :)

Have yourself a wonderful weekend, too.

Before I forget, if you use that die and sandwich in wax paper first, then card stock, you shouldn't have those fiddly bit to poke out!!

Hoping Karma is on the mend now and you get a good sample!! Poor kitty!

And I'm hoping the relieved stress makes you feel better soonest as well!

It sounds like you are both well on the way to being back to normal life. Hang in there! :-)

Good to hear something from you and Karma. So glad she is done with those pills. Hope you get the sample without much trouble...glad you feel a bit better:)

Congratulations on winning the classes. That is definitely a wonderful prize.

I hope you plan on posting a picture of the invitations when they are done. I'll bet they are going to be super duper cute.

Good luck with Karma. It sounds like you are still making progress, so that is a good thing!

Well done for winning the 21 secrets Workshops. That will keep you active over the year huh Rita. Hope you enjoy it - Dave

fingers crossed it all goes well with Karma and she doesn't have to make a trip to the vet... and those cards are adorable... and I was very excited to see that you had won the spot in Dion's class... so get better in a hurry so you will be well enough to enjoy it... Phoebes sends a hug xx

Dear Rita, I read your last two posting today. I was hoping that the second posting would be "Friday" and when I saw "Thursday" I thought the worse! But then you explained about the "pee balls." I so hope that this coming Thursday when you post about what happened as a result of the vet examining the pee, there will be good word about Karma. And of course, I'm so glad to learn that you won the prize and will have about nine months to do the 21 classes. How wonderful to have something to look forward to as you are dealing with this flare-up. Please continue to take care of yourself . . . and Karma. Peace.