Caught such a pretty sunrise a couple days ago.  I haven't usually been up before the sun lately.  Today I am, but it's 30 degrees, 100% humidity, and foggy out there this morning. 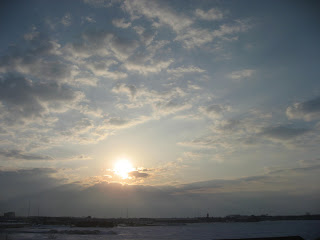 I actually played with the weekly zendala the last couple days. 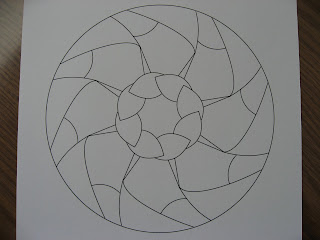 It went places I didn't expect... 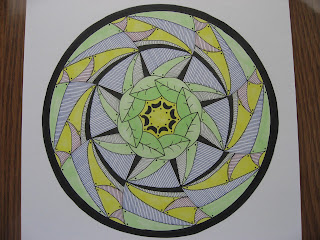 ...as doodling often does. 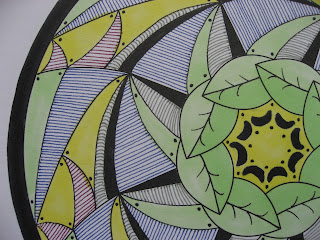 I had a wonderful pajama-movie-day birthday.  Watched Lincoln (very good) and Killing Them Softly (odd, violent movie with no real ending).  It was a warm sunny day in the 30s.  We had several last week.  So many that the parking lot turned from an ice skating rink during the nights into a lake during the days. 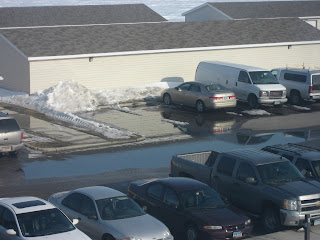 Karma was loving the morning sun... 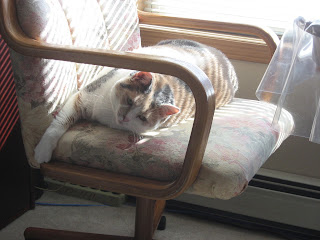 ...and I'd find her on my chair by the craft table soaking up rays. 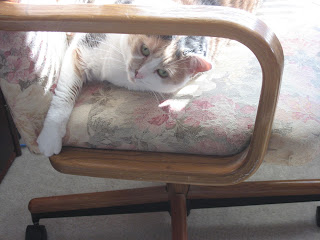 When I wanted to sit there I would just roll her away and grab another chair...which she found so very annoying.  She was pawing and beating up the chair in protest--so I tossed her new catnip toy at her... 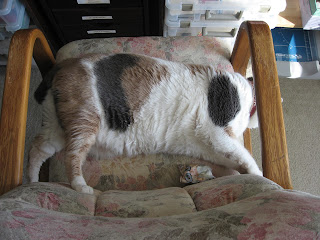 ...which she grabbed with her teeth and played with for a while. 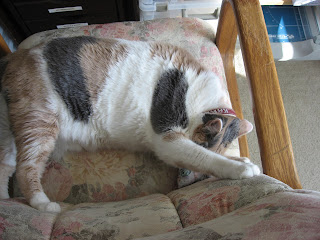 A pause to rest--clutching her toy. 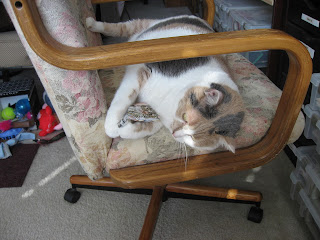 We played a little catch-my-toes, too. 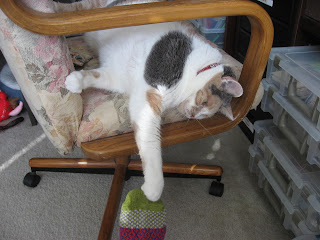 It's so nice to have Karma back to her goofy, opinionated self.  :)  She's lost 2-3 pounds over this illness.  (Weighing her at home isn't as accurate or easy since she doesn't like to be picked up, either.)
****
What a birthday!  I have to tell you--people literally shocked me to tears this year.  Several times.  I won't name names, but two people sent me Amazon gift credits and another sent money toward Karma's vet bill (and a couple more offered)!!  It's not often you will find me speechless.  ;)  I got comments and cards and letters and emails and ecards...it was a marvelous birthday!  My soul must have really needed it because I felt it lift and lift.  My heartfelt thanks to every one of you.  Bless you!!  :):)
****
Leah stopped by to cut my hair on Wednesday--so I maybe lost an ounce or two, myself--LOL!  I'm not moving quickly yet (as if I ever do anymore), but I have been working on replying to letters.  Next project will be making thank you cards!!
****
Funny, I woke up with this repeating thought in my head a few days ago--that we humans are both mundane and profound...mundane and profound...mundane and profound.  Like an ear worm thought, it's been in my head for days.  Makes me smile, actually.  Anyways, just wanted to pop in and say a very happy hi from Fargo.  Many thanks and may your life be overflowing with blessings, too!!  :) :)
****
"One word can be more precious than all the treasures on earth."
Hazrat Inayat Khan
Posted by Rita at 7:56 AM

I also wish to thank all of those who sent you those wonderful birthday gifts. I should have been one of them, but I wasn't. That doesn't mean I don't love you and Karma just lots and lots! I love your Zendala, BTW. Sending you virtual hugs. :-)

I posted a comment but it didn't come up. Here's another try. I wish I had been one of those gift suppliers, because you mean the world to me, too. Sending you cheap but sincere virtual hugs! :-)

Dear Rita, the zendala is lovely--it speaks of spring to me. I'm just so happy that you and Karma are better. And the gratitude you've expressed here for all your friends is what all of us feel about having you in our lives. Peace and Happy Easter tomorrow.

Sorry I missed your birthday, but so glad it was a good one.
Karma should keep the weight off, but you never know. My cat lost 100 g, which is good but when he is out hunting he will go back to his slimmer summer figure.

I am so glad you had such a wonderful birthday!! Great that Karma has fully recovered!

aww. glad you got some sweet surprises!

LOVE the zendala. the inner bloom circled in leaves is wonderful!

Re your zendala, which I love: When I paint a picture or make a stained glass piece, I often find that what I planned & the finished work are two entirely different things. Art seems to have a mind of it's own!!

Happy belated birthday. Glad to read it was fantastic. It's always nice to be appreciated, too.

So glad to read that Karma is doing so much better. I bet that was the best birthday gift of all!!

It's good to see Karma looking so fine. Happy Belated Birthday to you.

Glad you had a nice birthday! I'm also happy to hear that your cat is back to her feisty self.

So nice to see/hear Karma being herself again. what a sweetie-pie. I see I missed your birthday, hope you had a good day. It sounds like you certainly did! So happy for you... I've been remiss and missing you, your beautiful energy and perspective on life. You are such an inspiration. Hugs to you and your dear karma.

The sunrise photo is gorgeous, as is the zendala. I saw Killing Them Softly yesterday. I'll probably review it next week. I think it's a very tricky work, but I have some thoughts about it that I hope will help.

Belated birthday wishes from me too, Rita!! Sorry I missed it on the day! Life has been crazy, as usual. I have written you all about it.

It was music to my ears to see that Karma is back to her usual self.

How wonderful that you were so spoiled for your birthday and, rightly so, I might add. I'm glad it lifted your spirits even higher.

Happy Easter to you and Karma ~ xo

This is my first (but not last visit here) I want to say Happy belated birthday. Sounds like it was a good one. I enjoyed my visit here and will return!!xoxoxo Maron

So glad your birthday was such a blast, and poor Karma- if her chair would just quit getting moved...

I always love pictures of her!

HAPPY BIRTHDAY!!!!! I did make you a card, but it went out late. At least it (hopefully) won't be as late as last year!!

Hugs and it's so great to see you feeling better and doodling again!!

I'm glad you and Karma are feeling better. Also happy to know you had a wonderful birthday with a few surprises thrown in for good measure. *hugs*

Happy birthday! I'm glad you had a great time. Love the Karma pictures (as always!). That sunrise is gorgeous! It really gives a person hope for the day to see a sunrise like that. ☺

I hope you both recover to your former selves soon. I know what you mean about moving slowly. hehe. I'm dragging myself around lately.

The Zendela is wonderful!!! So glad you had a good birthday and that Karma is back to old self. Hope your week is fantastic...I think Spring has finally arrived here in Missouri ♥♥♥♥♥

Good to hear from you..so glad Karma is still doing okay. It is cold here..looks warmer out there than it is:)

You seem to be full :) Karma and your art works are a good means to keep you busy the whole day! :)

Happy Belated Birthday wishes. People are so very kind, I never really appreciated that before I came blogging.

Glad to see you and Karma more or less back to your jolly selves, long may it last.

..and that zendala! Goodness what an eye-catcher!