I am going to write this right now while I am still holding myself together.  From Friday to Saturday things with Karma's ear went horribly wrong.  Her ear was even more swollen, was suddenly turning purple, and there was bleeding!  She had been hiding under the bed--came out Saturday night.  I called McFamily right away and the emergency vet.  Dagan took us over. 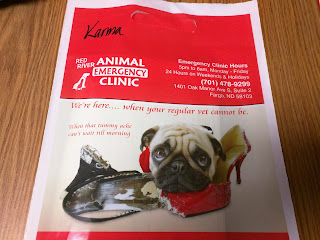 The vet was an absolutely wonderful guy!  He loves cats--even had a calico tattooed on his upper arm--and Karma even liked him!  Tolerating touching without hissing counts as liking...sick as she was she still hissed at every other person who came near her.  :)
****
Karma needed surgery to have a tube put in her ear.  We left and went to McFamily's to wait for the phone call that she was waking up after surgery and could go home.  But when he called (must have been close to 2am) he had bad news.  Karma had more wrong with her than just the aural hemotoma of her ear.
****
She had Feline Infectious Anemia.  It's a parasite that attaches to the red blood cells and kills them.  She actually needed a blood transfusion, but he said that might not help her much at all, anyways, because she was probably already suffering organ damage.  She'd dropped from close to 20 lbs down to 14 pounds.  She also had blood in her urine so they did an ultrasound and she had an inflamed bladder--probably from stress.
****
Puzzling as to where she got this, but it is actually possible that she could have been a carrier and even had it from birth and then the stress of the move set it off.  She was one very sick kitten when I brought her home all those years ago.  The vet at that time said she was probably born with the internal parasites she had--and Karma had ear mites really bad, her eyes matted up, but I can't remember if she had fleas back then.  They can get this anemia from fleas, mites, or even mosquitoes, apparently.  She hadn't had any fleas or ear mites since she was a kitten.
****
Anyways, the only one slim chance she had was to try to give her a couple medications and pain medicine for 24 to 48 hours and then see if her red blood cell count had risen.  If not...
****
That was why her ear went berzerk and wouldn't heal--extremely low red blood cell count.
****
Dagan brought us home.  I did want to try the last ditch effort for the day or two.
****
Karma was just fine with the gentle squeezing of her ear to milk the blood out.  In fact she purred when I was doing that.  But the ear would fill up again--because of the low clotting.  He warned about that being a bad sign.  I had to keep a close watch on her because of the risk of sudden death from hemorrhaging.  Any number of things could go wrong.  It was a shock to find out how ill she was! 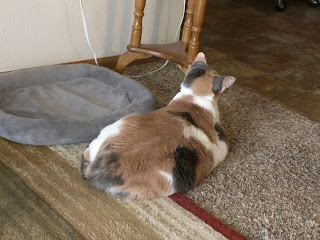 I was supposed to give her the meds when I got home.  The medication to attempt to kill off the parasites and not kill Karma was horrendous!  They warned me that it made them drool terribly for like 20 minutes or so.  That was an understatement!!  She wretched and drooled and panted and cried!  It was horrible!  After a half an hour it subsided but she was limp and lifeless.  Must be almost like chemo!
****
I decided right then that the odds were so slim that this was not worth it.  This was way worse than a bit of drooling!  I was not going to torture poor Karma for days.  Even if that worked, it would be a slow recovery and she very likely had other issues that could be potentially lethal, regardless.  (This really hit home when you read it all in the email that emergency sent to her vet's office.)
****
So, I removed the cone and just gave her pain medication.  I told Dagan and Leah (who agreed with me) that I needed to bring her in Monday to have her put to sleep.  I was just going to spend some nice quiet time with her, pray there wasn't a horrible, painful death in the meantime (but did pray for a peaceful, painless one at home--no such luck), and give her pain meds every 6 hours.
****
These pictures were taken Sunday morning with her shaved ear and tube.  She'd had her second does of pain medication and was feeling a little better.  Briefly walked around a tiny bit. 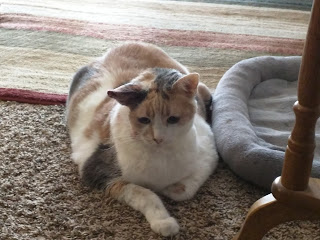 She refused to eat or drink, though.  She started up with an occasional deep loose sounding cough and she had a few wet sneezes--she was starting to get something--pneumonia or a bad cold.  She seemed to have occasional trouble swallowing...just normal swallowing.  Sometimes her breathing  sounded a bit too noisy.  She didn't want move.
****
You know when it is time.
****
She spent 90% of the time on my bed from when we got home from the emergency vet until we went to the regular vet this afternoon.  And I spent nearly that entire time lying next to her on the bed.  The only time she totally relaxed and laid her head down was if I laid next to her and put my arm around her.  And she'd purr and purr until she fell asleep.  She'd never sleep very long.  I had to get up sometimes (pain) to stretch a bit (had my arm around her but I didn't want the weight of my arm on her, so I had to hold it up a bit) and to get her pain meds and milk her ear tube...and as soon as she saw me coming back she'd start purring.
****
So I spent the last day and a half snuggled with Karma.  I can still almost hear that happy motor going and feel it against my chest and arm.  She just wanted me near.
****
Leah brought us over to the regular vets this afternoon while her brother, Aaron could be there while Ian took his nap.  Karma never even cried in the car--or emergency night, either.  She was so not herself.  They brought us to a little room and let me sit with Karma to calm her down--keeping my arm around her in her carrier.  (Karma was never a lap cat--we just took the top half off the carrier).  They took her away to start an IV and we never even heard Karma. (Normally she would have been growling and hissing.)  Then they left Leah and I alone in the room with her.  I had time to calm her down and to tell her they were all done and she'd be fine.  When I was ready--and Karma was as calm as she was going to be--we put a card under the door to let them know we were ready for the vet to come in.
****
I had one arm around her and the other hand under her head.  I felt every muscle in her body completely relax as I was telling her...don't worry...we're all done, Karma.  They wrapped her like a baby in her towel I always used in her carrier.
****
Good-bye Miss Karma.
****
We had a precious, sweet time together before she left.  Private and peaceful--just like she loved our life to be.  I am so thankful for pain medication.
****
I will be on hiatus.
Let's just say that if you don't hear from me all is well.  If there are any problems with the eye surgeries, etc--Leah offered to post for me.  But for now...just need some time.
****
Thank you everybody who has loved Miss Crabbypants, too, over the years.  She would have been 12 in a couple weeks.  I feel blessed to have had our last private, quiet time together.  I can still feel the rumbly soft fur under my fingers and hear her purring in my ear.
Posted by Rita at 5:27 PM