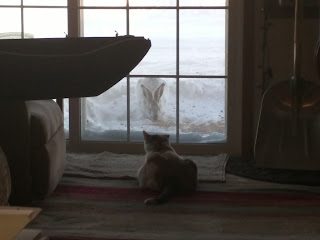 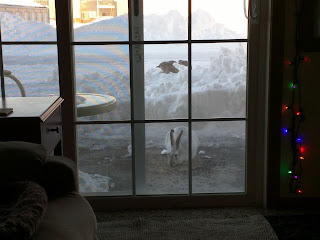 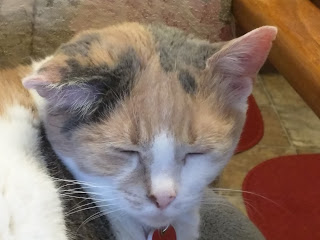 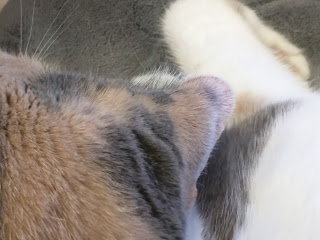 Ian is getting cuter by the day!!

Ian is such a gorgeous little wee toot.
Poor Karma... I hope she recovers soon and you can de-stress. You're having quite a time of it aren't you?
Good luck with your eye appointment xoxo

Oh gosh, I was so hoping that Karma would NOT have to go to the vet. That's not for sure just yet, is it? And yes, Ian is simply adorable! :-)

Poor Karma, one of my dogs had this problem and luckily it went away on its own and hasn't returned.

I loved the video of Ian — he is adorable! He loved his gifts.

Poor Karma! Hopefully, the vet will be able to help without her needing surgery. Does the calming spray help at all? I feel so bad for her and I know how concerned you are for her. Please keep us updated. I pray it will settle soon as she looks so sad. Makes me want to cry.

Good luck with your eye appointment.

POOR Karma. I hope her ear recovers soon! Looks like you had a good McFamily Christmas. I think its great to celebrate now when the winter is in full swing and lots of other activities have rather settled back into the routine. Hugs-Erika

Poor Karma. I laugh when people say pets relieve our stress. I've had enough pets, and now a 16+-year-old cat who needs a lot of help, and can say pets also cause stress! Hope you make it to the doc appointment and the news isn't too bad.

Will you never learn Karma, inflicting such pain on yourself time and again

I feel so sorry for Karma. She looks like she's in pain. I hope the ear heals on its own, because that could be a real problem for both of you.

I can't wait to get my new computer back so I can see Ian. Sounds like he put on a real show.

Hope your eye appointment goes well. I have my fingers crossed.

Poor Karma, fat swollen ears must hurt! I hope you can just treat her at home with rest. I hope your appointment went well:)

Aww Ian's SO cute!!! He's not quite at that age yet where he understands exactly why all these presents are being set in front of him, but he's not going to argue about it! I had a terrier dog once that injured his ear. He had allergies so bad that he'd scratch it until a chunk was gone from it. It's so frustrating because you can't really do anything.

Awe that is the cutest video ever. He sure talks well and LOVES his Grandma! What a sweet little guy he is. Hopefully Karma heals quickly. She hasn't had a very good New Year. I would definitely stay away from surgery if possible. I am hoping your eye appointment goes well Rita. You are in my thoughts!

Hi Rita! I've been catching up, and that poor little jackrabbit with the broken leg just about broke my heart, too! I'm glad to see Chester. That must be so much fun seeing all the wildlife! I was at our company's off-site park last week and a coyote ran right in front of my car. Not quite as exciting as seeing animals right through your back door, but he was pretty cute, as far as coyotes go. :) I'm sorry to hear about Karma's ear, and I hope your eye appointment went well!

Oh! And Ian is just as adorable as ever!!

I hope Karma's ear heals soon. How frustrating to have it doing well only to reinjure it. Hope the warm weather is melting some of the snow and the sun's rays are heating up an area for Karma to relax in as she watches the jack rabbits!