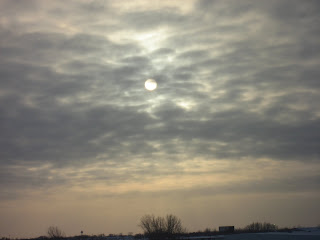 ...struggling to light the sky from behind a curtain of ripply clouds. 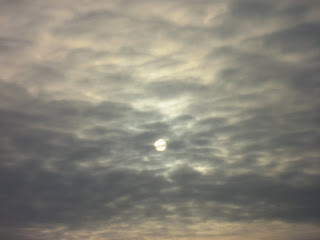 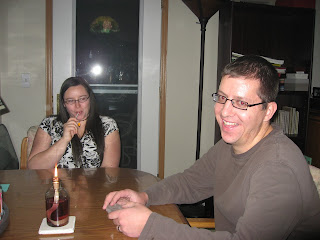 Since they noted that I take all these pictures of other people and never let anyone take pictures of me...I gave Leah the camera. 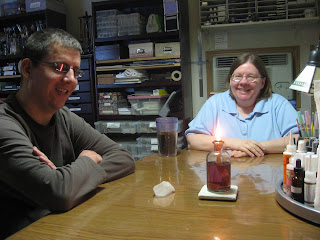 And she took pictures of Dagan and I. 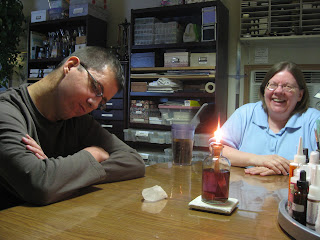 She just kept snapping away... 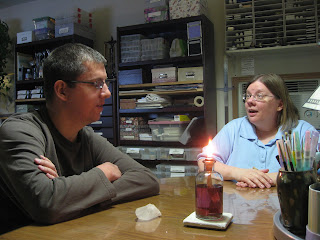 ...as we were talking and laughing. I sure do look skeptical of whatever Dagan was saying here. 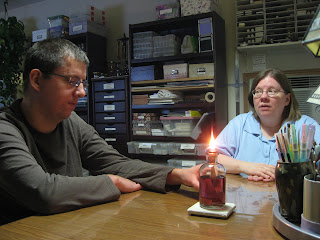 You can see the packed craft bookcases and such behind us. 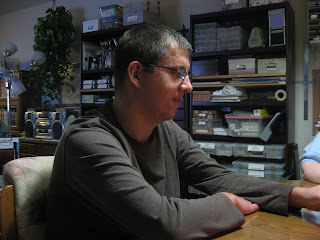 Leah took lots of pictures. In many of them I was blurry (always moving even tho I was trying to be still--note the hands) or had my eyes shut like this one--LOL! 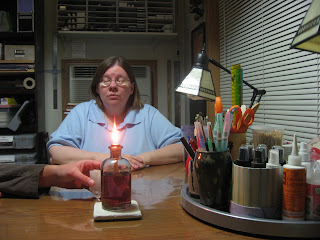 There. Some pictures of me. :) If I knew I was going to have pictures taken I would have at least combed my hair--hehe!
****
Anyways, they brought over this cat crinkle bag. Sammy was interested in it at first and then ignored it. We figured Karma might do the same thing, but we thought if we brought it back and forth it might become interesting again to each of them after they hadn't seen it for a while. (Annie had no interest at all.) 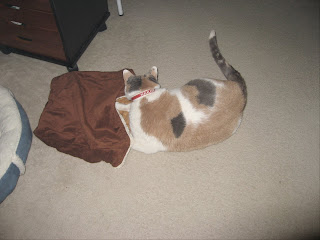 Karma checked it out immediately. 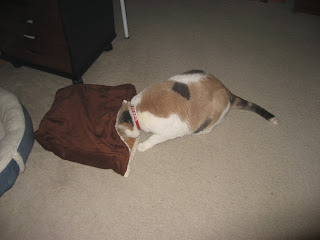 Obviously she is too big to fit but half inside the bag--ha! 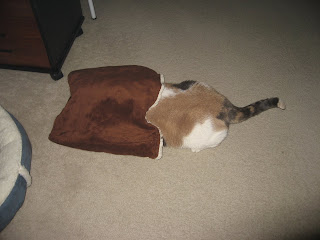 She laid on it for a couple of hours! 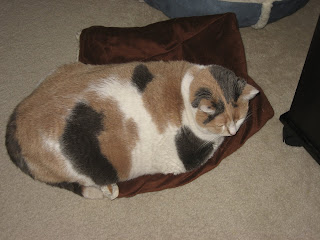 When she finally moved off of it...I discovered this! 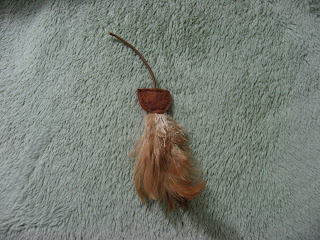 The bag had this built in hanging feather--operative word being HAD. That is why she dived into the bag and stayed inside for a few minutes--and that is what she was pawing at inside the bag, I guess. Chewed the leather strip right off and was laying on her dead animal. Sorry, Sammy--if he liked it. :( Oh well.
****
She looks pretty innocent here--parked on top of the crinkle bag. 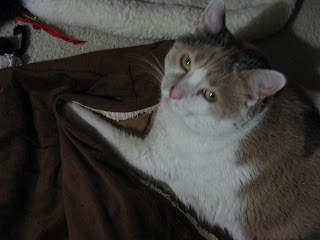 In fact, she is actually giving me that "are you EVER going to go to bed" look. (Been up all night again.) In fact--I think I'll be heading there right after I post this. :)
****
Have a super Thursday!!
****
(I hope Sammy remembers this quote when the crinkle bag comes back home without its dangly feather!)
****
"There are those who give with joy, and that joy is their reward."
Kahlil Gibran
Posted by Rita at 9:02 AM

I love that Karma loves his toys, his beds and his litter box!! That cat is not difficult to please, not at all! :)

You look like somebody from Seattle. Have you ever been there?

Karma is a doll! You can sew that back on somehow I'll bet so she can chew it off again ;-)

Maybe she was hoping you'd go to bed before she got bored of laying there, so she could destroy the evidence? ;)

Oh but those are the best pictures - you're relaxed, happy, and being yourself. That's what we want to see!

Loved all the pics. The sun thru the clouds pics were awesome. It's great to see you in some pics, too. (thanks, Leah)

I hope you were able to get some sleep. Time for me to head that way right now. (it's almost 11PM here)

It's snowing outside and we're to get 3 to 5 inches tonight. I can hardly wait to clean the snow off of my car again tomorrow morning so I can get to work. :\ (have i mentioned that i hate winter these days?)

Nikki--Well, she can be quite nasty and grumpy if crossed or denied what she feels is her due--ROFL! But on the whole, when it is just her and I, she's a pretty happy camper. ;)

Parsley--The leather strip was sewn into a seam but, even if I could replace it, the trouble is Karma swallows pieces of the leather--duh! She's got quite the "string or anything resembling string" fetish and eaten enough of it, I think--ROFL!! You know how each furbaby has their own crazy habits. ;)

Tori--That may be--LOL! She just does like to lie on things to kind of lay claim to them. I think she was a dog in her last life. ;)

Tatty--Thanks! We do laugh a lot and are all so totally comfortable with each other--glad it shows. :)

AliceKay--More snow! You don't usually get this much snow, do you? I loved your icicle photos. Sleep well! It's almost the weekend. ;)

It was great to see some pics of you, Rita....lovely! lol Karma must have felt quite pleased with herself. :)

HaHa Karma is cute with the bag and I love how she tackled the feather and immedediately removed it. Loved seeing the pictures and it sure looked like all of you were having a nice time together. The pictures of the sun behind the clouds looks like something from a scary movie lol I hope you got you some sleep :o)

Donna @ The House on the Corner said...

Wonderful pictures Rita!! I love casual, random pictures. They catch us relaxed and being ourselves and are so fun to look back on.

Karma reminds me a lot of Jackson - so sweet but a little streak of devil ;-)

Serena--Ha! The round little Swede gets in front of the camera--hehe! ;) We enjoy each other's company so much. I think it shows. Thanks. :)
Oh yes--Karma the great hunter was quite proud of herself. LOL!

Lynn--Yes--we do have such a nice time together. We love each other unconditionally and that is such a precious thing. :)
I agree! I thought the sun almost looked like a moon on a creepy night. LOL!

Donna--Thanks! You're right. It's nice to have pictures of those great times so we never forget. :):)
Oh yes! Karma is an angel/devil cat! She can be an angel a lot of the time, but that devil pops out whenever she believes things aren't going her way--ROFL! ;)

LOL @ thinking she was a dog in her last life!


Mind you... Maybe she was. It's definately possible, and definately seems like it from her behaviour sometimes. ;)

i like seeing you and yours having a good time!

Iggy--Thanks! We really do enjoy each other's company. Not too often a son and DIL tell you that their "dream house" includes a MIL apartment. I guess somebody loves me, eh? ;) Besides old stink eye, I mean. ROFL!