For several days Karma seemed to be waiting for Ruby to come back. Every time there were people in the hallway she'd go stare at the door waiting...in anticipation of Miss Ruby.
I miss her, too. ;) 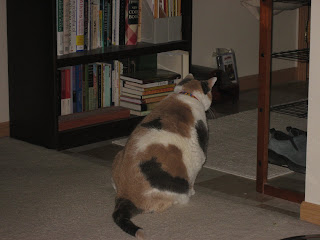 Karma has been harder to sneak up on for pics, too--LOL! 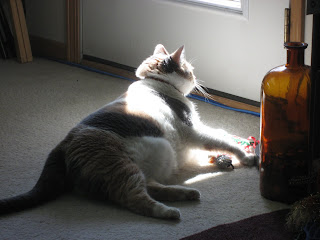 Whether inside lounging in the sunshine... 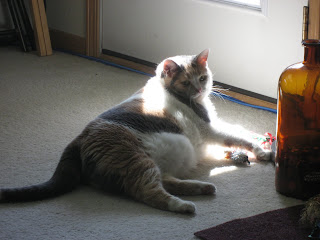 ...or out on the porch soaking up the heat. 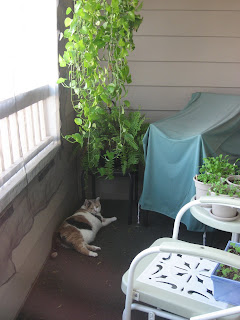 But is was 90 again one day and that puts Karma into a contented coma. 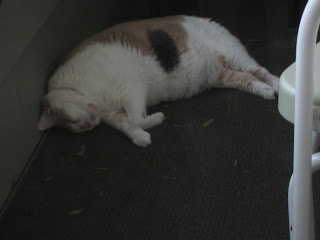 As you can tell, been pretty quiet around here this week--LOL! 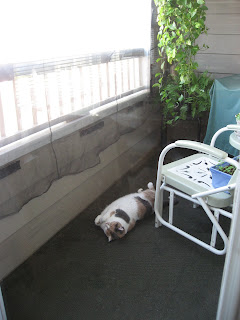 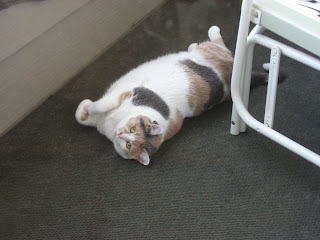 Me...well, I had the dentist on Tuesday afternoon. Then Wednesday Caroline had to bring a client in for a pre-op exam, so she called to switch to Thursday. I cancelled Dagan and Leah on Wednesday night because I've either been sleeping 9-10 hours or under 5, so wanted to sleep while I could, whenever I could--plus I knew they had run every day last week, so they were fine with that.
****
Been reading, journaling, writing letters, catching up reading blogs (didn't post on the old ones, but have read everything now), emails, watched a couple movies, some TV...a fairly quiet, contented week. :)
****
My soap (All My Children) that I've been following and chuckling over for 40 years, is going off the air in September after 41 years. They said they were going to try to wrap up storylines before then, right? Well, I have been totally, totally LMAO and enjoying these past several weeks. People are coming back from the dead left and right! Or past characters are glimpsed in dreams or visions or phone calls...it is so totally over-the-top unbelievable (Dixie is on her second Lazarus trip as we speak) but then soaps are not known for being reality-based TV--LOL! Crazy as this ending has been, I have to admit it is such fun to see old familiar faces. Plots are moving at warp speed, Pine Valley emotions are flip-flopping all over the place--and Susan Lucci (Erica) is soon to be unemployed. What a hoot! I can hardly wait to see who else is coming back from the dead! ;)
****
I hope you all have a super weekend!! :):)
****
Even Socrates, who lived a very frugal and simple life, loved to go to the market. When his students asked about this, he replied, "I love to go and see all the things I am happy without."
Jack Kornfield
from After the Ecstasy, the Laundry
Posted by Rita at 5:48 PM

Yep, it sure looks like Karma is waiting for Ruby to walk back thru your door. She must have enjoyed her company, too. :)

When Guiding Light, and then As The World Turns, was going off the air, they brought back a lot of old characters. It was like old home day on those shows for awhile. But it was a sad day when the "light" went out on both of them. I don't watch All My Children, but I started watching One Life To Live after ATWT went off the air, and now that show's going off the air in January. :(

I'm sitting here waiting to see what Hurricane Irene brings our way. We will get something...just depends on how far west she comes on how bad we get it. Gonna be a rough Sunday.

Donna @ The House on the Corner said...

Don't you wish sometimes you were a cat. I just love the way they lay in the sun and roll over on their backs ~ the picture of satisfaction.

Tying up soapie storylines??!!! That would be just about impossible with the way they twist and turn. I can imagine the fun you're having in seeing them put it all together...LOL

It sounds like things are pretty much back to norm in your neck of the woods. I'm sure Ruby misses you and Karma too.

It's a wet weekend here.

AliceKay--Karma got along amazingly well with Ruby. She didn't even run away when she first arrived! (She did a couple of times when Ruby was up and around a lot, tho--hehe!) Karma let Ruby comb her once, pet her more than once, and rubbed on her legs several times. Two old ladies move slowly--LOL!
Yes, OLTL has several more months till the end than AMC. They're hinting at another dead person really being kept alive by this genius evil doctor--possibly more. ROFLMAO!!! So funny to watch!
I hope you will be safe from Hurricane Irene! I hope everyone will safe!!

Donna--I honestly think I live as close a life to a pampered cat as I ever could these days. (If you just ignore the pain part--LOL!) ;)

Serena--It's been just hysterical to watch! The egotistical (very handsome) doctor who's supposedly secretly kept people miraculously alive (stem cell research of some kind--but how would that piece together someone blown up in a plane or fix someone poisoned--ROFL!) who we thought had been dead for years--some we watched die on screen and saw the funerals! LOLOL!! It is just cracking me up--a weird way to have old characters return for a last hurrah! We have seen photos, flashbacks, very brief return visits by the original actors--a trip down memory lane before Pine Valley rolls up the sidewalks--hehe! Been silly and fun!
Stay dry and warm this weekend! We've got a hurricane traveling up the east coast. *sigh*

Awww! That's sweet about Karma waiting for her to come back. Bet she's really disappointed her new friend hasn't come back.

Sounds like you've had a pretty good week... Probably wuld have been nicer without the dentist appointment, but there are worse places to go than the dentist. :)

Sorry your soap is coming to an end. I'm glad you're enjoying the rather action packed - by the sound of it - ending to it!

karma is such a beautiful...and contented kitty! i would love to just lie around like that...go from room to room...out to the porch...just stretch out on the floor...and wait for someone to pet me!! then feed me. pet me, feed me! i must've been a cat in a past life...

HEY!! i've never watched the Soaps...but how can they possibly wrap up story lines after FORTY-ONE years of story telling...wow!! that must be the longest running show on tv...EVER!!

well...you had a nice visit with your friend Ruby...and it's prob tough to 'get back to normal' now...and i think karma agrees...she prob liked having an xtra hand around to give her hugs!

take it easy & have a great weekend!!

This post is full of contentment and gratitude... and it makes me feel that way, too. I do hope you have a wonderful weekend, and I just LOVE that quote from Socrates. I'll look around at the market today with him in mind. :-)

Rita, I want to thank you for your comments on my blog and to tell you how much I enjoy the serenity of your postings.

Seeing pictures of lovely, lazy, lounging Karma and learning about her and your visits with Ruby and your enjoyment of the soaps somehow puts my day and the things to do and be done in perspective.

When I read your blog, I feel as if I'm flowing easily down the St. Croix River with you on a raft and we're sipping lemonade and watching the lush scenery go past and sharing our lives.

Thank you for the trip.

Tori--Yes, Karma accepted Ruby quite well considering and she must have even missed her, despite her trying to diligently profess the opposite about any company whatsoever--LOL! ;)

Laura--I'd love to be a spoiled house cat in my next life--LOL!
This is the only soap I have followed for all these years and it is funny to see them try to wrap up story lines. A Herculean task! There were other soaps that were on longer, tho. Some started on radio first!! I don't know which one has been or was on the longest, but it wasn't mine. ;)
Hope you're having a good weekend.

Djan--*chuckles* I can picture you wandering the market enjoying what you can do without!! LOL!
Any time one can share contentment and gratitude it's a wonderful thing. Thanks, Lady!! :):)

Dee--I LOVE that picture of flowing easily down the St. Croix sipping lemonade!! (I'd probably pick a covered pontoon, tho--LOL!) Oh and the majestic cliffs, the blue sky, the...I was going to say green woods...but I'd rather picture the brightly painted fall trees with an eagle or a hawk soaring overhead. Fall is actually my favorite time of year. So glad we can take this ride together. Would you like a little more lemonade? ;)

I love how you turn a phrase! Contented Coma...

Any plot motion in a soap opera is just an illusion...

Had to chuckle at the soap opera stuff here! When I was a young wife,home with my babies, I'd watch General Hospital. The ridiculous stuff they came up with! One of the most memorable was the Ice Princess (Elizabeth Taylor) who was some sort of scheming mafia type in all her beauty and diamonds, who controlled the weather from underground. And stopped the world for a time with a freeze up...while she went about her dasterdly deeds. LOL...who dreams this stuff up?!

Kathleen--Elizabeth loved her soaps! Carol Burnett was an AMC fan and they were both on together for a brief silly moment. I LOVED when Carol came on and played a short stint as Verla Grubs!!
http://www.youtube.com/watch?v=rSJGBYvm_Es

Kathleen--OMG! I just saw on a commercial that Carol Burnett is going to make an appearance here in September for AMC's swan song! Just told you how I loved her Verla Grubs! LOLOL! I can hardly wait! :)