Rant.
****
Blogger forced me over to the new format today.  It's taken me half an hour just to get these five pictures on the blog in the order I wanted them.  For six years I have had to load them bottom to top, five at a time.  I could rearrange them if I messed up the order after they were on the post (cut and paste).  I know I heard some of you can add pictures one at a time and they pop up wherever you have the cursor--well, that has never worked for me.  No matter where my cursor is, they always popped up at the top.  At least I could cut and paste them elsewhere.
****
Now they go from top to bottom (I forgot that, of course) and if you don't have them in the exact order you want them the first time--well, you're screwed.  Or I am, anyways, until I figure out if there is some other magical, secret way to move them around.  Since Blogger worked differently for others before, this new format might work differently for you now, too.  Maybe it's because I have a Mac?  I don't know.
****
Once again (which is why I switched back to the old version the time I tried it) even though I click cancel on the pictures (because they were in the wrong order) the pictures remain right there and never go away.  I can delete the entire post so that I can try to start over--and the pictures are saved and will pop right back up--still in the wrong order, of course.  I have to delete everything and shut down the laptop and reboot to get rid of the pictures that I screwed up on in the first place and get a blank slate again.  Aarrgggg!!!
****
There is probably something very, very simple I am missing.  I don't know.  But now we are really stuck with this new version.  I feel like I moved to a new town while I was sleeping and I don't know where anything is anymore.  Don't know what this has to do with google+, either??
****
Anyways, if I have pictures out of order in the future, you will know why.  ;)  But I struggled this morning to get my sky pictures first--where I like them. 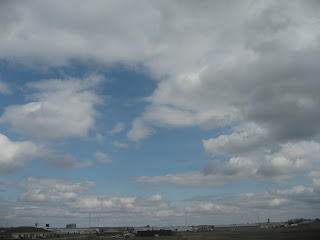 Been a struggle up there, too, between blue skies and clouds...between sun and rain. 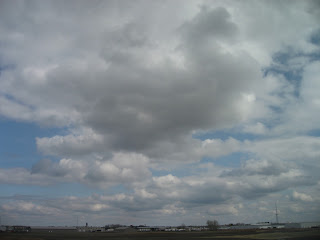 Karma says hi.
(She's begging to go out on the porch as I am typing this.) 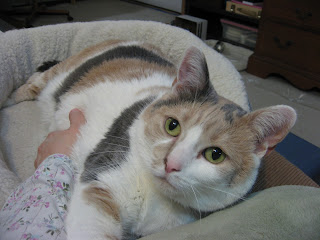 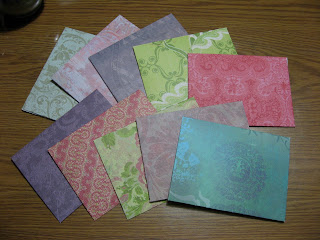 I am leaving them plain like this so I can decide as I pick them how I want to use them.  I can leave them plain (as just envelopes)--or sew in the pages--embellish, trim, punch, round corners--whatever I feel like at the time. 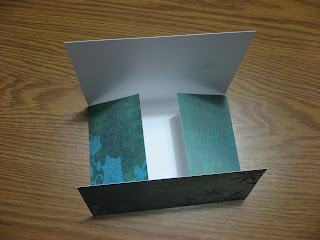 These were easy enough to make while I watched TV...or the crows out playing in the big parking lot puddle.  I do so love it when the crows drop by.  :)
****
Let me know if those you holdouts, like me, were forced over to the new format today, too.  I know I will figure this out.  I just have a difficult time with computer change, as you know.  *sigh*
****
Well, it is free.  As far as I can tell my blog looks the same.  Maybe I will learn to love this new dashboard.  *sigh*
****
Rant over.  ;)
****
"One does not discover new lands without consenting to lose sight of the shore for a very long time."
Andre Gide
Posted by Rita at 9:36 AM

it must be because you use a mac. and i've gotten used to the new interface so hope you will, also!

I despise the new interface. I was able to go back to the old Blogger dashboard, though. There seems to be the option of using either one. I hope it stays that way.

I've actually gotten used to the new format, and you KNOW how upset I was when it changed for me! As for the pictures, I now like it because I usually have TONS of them and now I can click them all, and walk away from the computer while they upload. It's actually a time saver for me rather than uploading them one at a time.

For moving them, and like you I was used to uploading them "backwards", you click on the photo and when it's highlighted blue, you can drag it where you want it. Sometimes you can only move it one position at a time, but you can move them. It's easier if you can just upload them in the order that you want them to be in the first place though!

You'll be OK, honest! I still don't like my dashboard, but you do get use to it. Sorta.

it's always annoying when the webhost forces you to use a new format :) Karma is cute!
Nutschell
www.thewritingnut.com
Happy A-Zing!

I have been hopping back and forth from the old to the new. I really don't like the new.
I use windows live writer for my posts which I don't think you can use on mac.

I haven't put many pictures on posts so I haven't had the frustration you did, Rita, but I definitely don't like the new Dashboard format. You are right, you'll get use to it, but I just wish they would leave things alone!

Here in England, we moved to the new format on 1st April...and everyone thought it was a joke, but, unfortunately not.
I'm still getting used to it, as I've not been blogging very long anyway, and then it changed! :(
So, I had to start all over again....GRRRRR!

Step 1. Add your photos.
Step 2. Click on "edit html"
Step 3. Select the entire code for the picture you want to move
Step 4. "cut" the code
Step 5. Move the cursor to where you want the picture to be moved to
Step 6. "paste" the picture's code in that spot

So sorry you've still having problems with the images, Rita...try what Jeannie suggested. I wonder if the cursor issue is due to using a Mac?

As you know, I love the new interface and started using it when they first brought it out months ago. It's been a breeze for me so I can't complain. Don't give up on it just yet...although I understand how frustrating it must be for you. If the issues persist, you may want to consider Wordpress?

Btw, even though Google own Blogger/Blogspot, Google+ is an entirely separate thing so I can't see it being the cause.

Great sky pics. I love fluffy clouds! And, of course, sweet, sweet Karma. A lovely array of envelopes too ~

Have a lovely weekend,

I was forced into the new interface tonight. I went to my blog a bit ago to post something and wham! There it was! :( I wasn't planning on posting any pictures tonight, but I guess I'll see how things go when I do get a chance to post some. (i have loads of pics to post so this will be a trial and error on my part, i'm sure)

There was something I clicked on quite some time ago to change how pictures were uploaded into the blog post, but I don't even remember what it was now. I used to upload 5 at a time, bottom ones first, but then didn't have to after switching to whatever I switched to. (don't you just like my technical talk? LOL) Sitting here uploading one by one is time consuming, so maybe this new format will be better?

I was in the "Edit HTML" tonight to add code for the song video I posted, but some of it looked Greek to me. (and the paragraphing was still off in spots) I hate change, too. :\

Karma looked content enough in that picture. I bet she was purring while waiting for you to let her out on the porch. :)

I use a Mac, always have since I started blogging. I put in some text, then a picture. I can tell it to center, right or left, and resize it. Put in a caption if I want. Then I type some more text, and put in another picture.

I've been using the new format for awhile now and haven't felt forced in any direction. But if I want to move a picture, I have to cut and paste the entire thing, and something the magic doesn't work. In that case, I just reenter the picture with the cursor where I want it. I do hope this works for you.

Maybe it's because you are useing a Mac I don't know I do not have the same problem as yet fingers crossed I will not have it............Love the photos you have shared the envelopes you have made look so pretty....

I'm having difficulty too with the new Blogger format. The box that I compose the posts in is much smaller than the one on the old format. After I add a picture, it's even smaller. Hopefully I'll figure it out someday.

The beautiful blue sky against the clouds looked so inviting. Makes one want to just look at the clouds move and see what new shapes they take with the wind.

I find it easier to put pictures on with the new format. So...maybe you are having problems because you have a Mac.
Nice sky pictures! Miss Karma looks nice and content.

Do whatever the Mac users say..hope that helps.
I use Live Writer..but that cannot be used with a Mac..hang in there! :)

Comment to Harvest Moon by Hand....you can change the size of the box where you compose your text by clicking on the arrow (or whatever it is down there...i forget, sorry) at the bottom of the box. It will then expand it to the size it used to be.

Well you can see by all the new posts I've made how much I like the new version.

Its enough to drive a dog-lover mad enough to get a cat!

i hope you get it all figured out rita...it can be so time consuming and frustrating. you have a mac? i don't see how that would make a difference. but anyway...it took a little getting used to, the new format that is...but now it works fine. i do one picture at a time...you can upload ALL the pictures at once, but just highlight the ONE you want to add at each spot.
then you can move left or right or center...and change the size...these options pop up as you just hover your mouse over the posted picture.