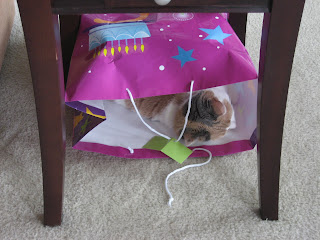 Silly picture to pick for that title, I know. Karma is still enjoying my birthday present bag from Ruby. But being in the bag is still being outside the box.
****
I always felt I lived outside the box...but with the door left open, I guess. I followed my own personal set of rules. Lived on the fringes...the edges...but could blend in anywhere I needed to. Remained true enough to myself that other people knew I followed my own path and wasn't like everybody else, but genuinely loved people enough that they accepted me as I was. At least that is how I see it. Hard to know what other people think. And I didn't spend much time worrying about that, to be honest. I think I was born with one foot on my own personal spiritual quest and that was my top priority. My successes and failures are my own.
****
Recently I watched two different documentaries that were eerily similar on how two different creative men coped with their own personal traumas, anger, and their need for comfort and safety. Each of them created their own unique little worlds. Talk about living outside the box. To the point where they lived inside their own created-world box. Mark is still alive, but they didn't discover Henry's world until after he died.
****
Marwencol
After a terrible beating left Mark Hogancamp brain damaged, he began creating models of a fictional town, Marwencol, to process the trauma. Jeff Malmberg's documentary explains how Hogancamp uses the elaborate dioramas as stand-ins for real life.
In The Realms of The Unreal
Featuring the voices of Dakota Fanning and Larry Pine and the work of talented animators, this documentary tells the story of Henry Darger, a reclusive janitor by day with few--if any--friends, but by night a literary artist with a unique vision. Darger's resulting 15,000 page epic is a wonderland of imagination as it deals with the exploits of seven angelic sisters who lead a rebellion against men who enslave children.
****
You can click on the titles and watch trailers.
Human beings are the most amazing, adaptable species.
If we absolutely cannot function inside the box any longer...
we are capable of creating a whole other box.
We will do anything needed to find comfort, safety, and companionship.
We want to belong somewhere.
We try to make sense of a world that can be ugly, painful, and unjust.
But there's that part of us that can soar and triumph over all that darkness.
****
I would imagine that both these documentaries could be a bit disturbing to a lot of people.
They touched me deeply.
Left a mark on my heart.
****
"Today you are You, that is truer than true. There is no one alive who is Youer than You."
"Be who you are and say what you feel because those who mind don't matter and those who matter don't mind."
Dr. Seuss quotes
Posted by Rita at 10:17 AM

I will come back later to check on the links.

Great post and I love the pic of Karma in the bag.

I look up to you so much!

I LOVE this line: "I was born with one foot on my own personal spiritual quest and that was my top priority."

I really loved this post, Rita. In a lot of ways, it felt as if you were writing about me!
As dysfunctional as I am, I tend to do my own thing, as long as no one gets hurt.
I live in my own world...not always to the rules but I love people. I would gladly talk to anyone.
A day-dreamer, a doer of things that I know I can do...just ME! An original one off.
I love Seuss and his quotes are so true!

I had to laff at that turn of phrase!

It's great to be accepted inside the box, but I like it outside the box too.

Karma reminds me of my kids when they were little- they loved the boxes toys came in more than the toys themselves!

I'll have to go visit those links, Rita. But for now I'd like to say thank you for those amazing quotes at the end of your post. Yes! :-)

I watched both trailers. The human mind can be quite creative when it needs to be. Both men had their own things (I was going to say demons) to deal with, and they dealt with them the best way their minds could.

I've seen that second quote quite a bit lately. It's been making it's way around Facebook.

I think it is good to think outside the box and live outside the box too; I think sometimes we get stuck in it when there is some other things we might want to do instead. Amazing with the janitor and his "hidden" talent so to speak. I guess it goes to say for us not to judge anyone with what they do, look like, etc.

So funny Karma is still enjoying the bag :)

Great post Rita... I love shows like that and when I did my masters I read so many extraordinary accounts of creative lives lived outside the box, it made the work a joy to do... I am heading over to see the trailers...xx

Yeah I read outside the box and see Karma in a bag and I think ok what does a cat in a bag have to do with being outside a box but I read on and you explained thank you because I am a little thick at times and don't always get things right off....

i've never really been on the inside...but i think it would be too crowded, restrained, monotonous...

Great post ~ love the photo of Karma ~ such a sweetie ~ must take after his owner ~ You do keep yourself informed ~ Happy Birthday again ~ Hope all is well ~ hugs and namaste, to you both ~ ^_^

That first quote is my daughter Katie's favorite. She's seventeen, and has is printed out and stuck on her wall in her bedroom...

I always lived inside the box, colored inside the lines, worried about what people thought, etc. My behavior was completely INSIDE the box.

My thoughts, however, have always exploded out of the box! I just didn't share them with anyone.

Spiritually, I still believe much the same as I did when I was four... Totally unorthodox! I joke with my friends that I'm a heathen, which I'm not (probably) but I do not fit easily into an orthodox framework...

I love it that you've always done your own thing. I was always worried about what my mom and dad would think.

I'm going to check out the links...

Thank you for sharing the links and such an honest and insightful post. Between your words and quotes, they were just what I needed to read this morning!

OH that picture of Karma is adorable!!

I guess I'm kinda the same...I follow my own path but can blend in anywhere I need to.

Interesting links, Rita. Yep, we can create a new box if we can no longer function in the one we've been used to. I saw another brain injury case where the guy's left brain could no longer function due to injury...I think I first saw him on Oprah. Before his accident, he had never been involved with anything artistic at all but, after he recovered, he just started creating the most realistic sculptures...they were incredible. I believe we draw on our strength within, our Higher Selves, which helps us adapt to a new or different way of life.

I've always loved that last quote by Dr. Seuss - Be who you are and say what you feel because those who mind don't matter and those who matter don't mind.