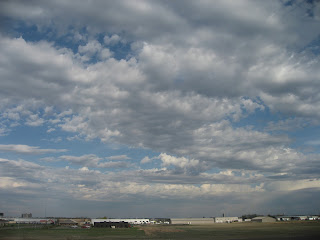 July 12th I have an appointment to see my rheumatologist and I am going to ask him if we can get some baseline x-rays taken this year.  My lower back and hips, especially, just gradually keep getting worse and I realized we have no baseline x-rays to compare to should they get totally out of whack, you know?
****
He may not have suggested it because it wouldn't be covered by Medicare.  If that's the case...it's probably too expensive for me.  But I do plan to ask him about it this year.
****
Maybe there's a substitute for Darvocet the pharmaceutical companies have come up with by now that costs ten times as much, too.  My rheumatologist told me that is what he's been watching the pharmaceutical companies doing--buying up smaller companies who have had cheaper, older, time-tested drugs and then discontinuing them so they can make a new, way more expensive drug that doesn't work as well as the old one and hasn't had the safety record of years of being on the market.  He's been seeing a lot more negative side effects with the newer drugs.
****
Strange how things work here.  Makes you wonder if there's anything that isn't decided by profits first and foremost.  The welfare of the people comes second...or tenth...or not at all...until they're taken to court.
****
Anyways, if they're covered or if I can afford it...x-rays this summer on my aching back and hips.  That's what came to mind when I saw "X".  ;)
****
Only Saturday and Monday left!  Goodness!  April is almost over.  Have you learned a little more about me this month?  :)
****
It's a dark, cloudy day in Fargo.
48 degrees.
Windy.
More like a typical spring day.
Have a great weekend!!!
****
"Thought is the sculptor who can create the person you want to be."
Henry David Thoreau
Posted by Rita at 10:17 AM

Hi Rita, Hope you get your X rays! Still having problems with blogger..rats..LOL.
Love your latest bunch of crazy socks!~ :)

Good luck with your visit to your rheumatologist.

Jenny @ Pearson Report
Co-Host of the Blogging from A to Z Challenge.

I hope the x-rays are covered, because that baseline really is important. I hear you about the pain and the profit driven drug world. It is such a criminal shame.

April really has flown, hasn't it.

I'm so happy to have gotten this chance to get to know you!

Good luck at the rheumatologist's. I hope you get the X-rays.

I hope your doctor will be able to do this sensible thing. As for the drug thing, it is shocking. I would have thought there was some regulation to avoid that happening. I haven't heard of it in the UK.

Ues, I have learned more about you this month and it is very interesting! I have enjoyed reading your interesting tales of youth and hope you will post more !

i do hate the insurance industry and the pharmaceutical industry as well...

I wrote about X-ray too. I posted a pic of my mom's broken shoulder and the replacement pins they put in. Gross and awesome at the same time. X-ray technology really is amazing. Hope you get a good report at the docs. So nice to find you!

Here in the U.K. all medical procedures take ages to do. Eighteen weeks is the normal limit for a dentist to see you, unless you go private. It makes me wonder about all of these "Cosmetic Surgeries", that are just plain vanity, and where the money comes from for them!

I hope you are able to get your X-Rays that you need and the med too. The drug companies have us all dangling, that is for sure!

You are such an amazing person,
Rita. I spent well over an hour two days ago reading your stories and was so moved by them (I found a way around the link situation by going directly to your other page and clicking on them individually). I love how you learned to listen to your Guidance and how you've shared it with others.

I have learned more about you this month, Rita, and did enjoy reading your posts! It is amazing to think the month is almost over. I do wish you could get the baseline x-rays; it makes perfect sense to have something to compare to down the road.

I used to take painkillers and anti-inflammatory drugs for arthritis. Then I stopped taking them, the pain went away and all is well! Weird!
Now, I don't take anything.

Was it all in my mind?

Good idea about the x-rays.

I too have back issues and just haven't gone for an X-ray becuase well, just haven't....brrr...it's cold in your neck of the woods; we're at almost 80 in North CArolina :)


Hope you get to feeling better soon Rita...I know pain is no fun

It's expensive having any kind of medical issue, and the ongoing ones seem to pile up on you. I hope you can get those xrays done. Drug companies are only after profits...first and foremost. I firmly believe that. If they weren't, they would make their drugs affordable to the average person. I stopped taking a couple of prescriptions after taking them only a couple of months because I just couldn't afford them.

I'm thinking of going to my doctor to see if they can do another set of x-rays on my back. It's been five years since they did the ones that found the scoliosis, and I know my spine is much worse now than it was five years ago. I feel it every day. My insurance will pay for part, once I cover my deductible.

It was in the mid 40s here today. It was spitting snow on my drive into work this morning, but it didn't stick around. The sun was in and out of clouds all day long, and it was rather windy. It's in the upper 30s as I type this. (where did spring go?)

Hope your weekend is a good one.

Yep, I've learned a few new things about you. :)

It never hurts to ask; if you don't ask, you don't know, after all!

Wait... They care about the welfare of the people sometimes? I thought that stopped a few years ago? ;)

Good luck with getting the x-rays.

Regarding the new drugs, I see the commercials on tv for the drugs they are pushing, and when they list the side effects (granted they're remote) but most of them are worse than whatever the drug is supposed to help with. Sorry, I don't want to get cancer from trying to help with some minor allergy.

So happy we have the health system we have here Rita, and wish you could have a much easier time of it... my daughter is getting some relief with the new treatment, and I wish we could package up some relief for you as well.. fingers crossed the x rays aren't too expensive and you can get that base line done... I honestly just can't understand why it is all so expensive over there... just awful... sending lots of positive thoughts your way...xx

I hope you get your x-rays!!! Medical care really has become a big business and that is a shame. All that money could be used to help more people, but usually doesn't. The days of the family doctor and small practice has all but disappeared!

The profit motive seems to have taken over the country and the minds of everyone in power. I remember reading somewhere that capitalism is dangerous just for that reason. Once upon a time I lived in a democracy that actually cared for its citizens. No more.

I do hope you get you x-rays, though.

I hope you can get the x rays I also think people who smoke or have smoked should have regular chest x rays done that way they could pick up lung cancer earlier to me that just makes sense.....my dads lung cancer was only picked up by accident on a chest x ray he went to the hospital with stomach pains and when they couldn't find a cause they decided to do a chest x ray....after they found the cancer the stomach pain was forgotten........

Of course it's the almighty dolar that comes first.

The courts are useless too.

Hope you get to glow in the dark for a bit and get those x-rays!

PHOOEY on the drug companies. it's all about money! the side effects of drugs seem to cause more problems...sometimes...than the original complaint. same goes for the insurance companies!