Occasionally this month I may also post a video that was definitely worth my time. I absolutely love this woman's attitude and her views on life! :)
****
I did make it to PetSmart! Dagan hung out with me and waited almost 2 hours before I felt ready to take the chance on leaving the apartment. (Bad IBS day.) We were gone the better part of an hour. Came home with lots of plants, a few fish, a new heater, a can of TetraMin flake food, and some extra air stones. Dagan helped me take some water out of the tank so we could float the bag, got the new heater set up, and then had to take off. Was such a nice afternoon!
****
Karma observed...and claimed the heater packaging and plastic bags. 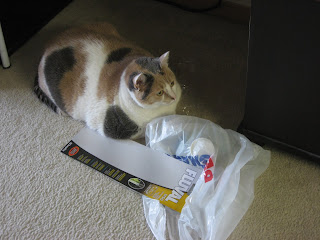 Floated the bags for an hour while the temperature slowly climbed. 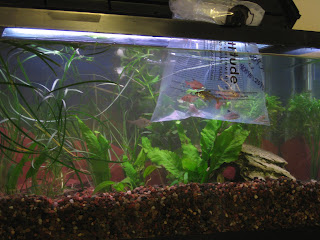 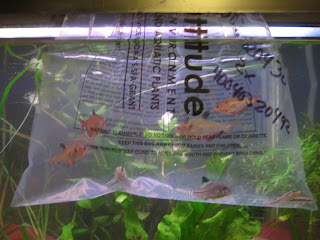 Yes, tetras.
Turns out that even with only two fish in the tank that Traitor and Runt didn't hang out with each other half the time. In fact, I am not going to call the big one Traitor anymore. I think Runt just is a born loner. Independent and not a follower, despite the fact he was born a schooling fish. The isolation has been Runt's choice. The proof would be with the arriving new group of four.
****
After an hour, I added some of the water from the ten gallon into the bag, refilled the tank, and let them float a while longer.
****
I thought it was dogs who rolled on dead fish--LOL! Not that there were any dead fish in the bags, but there must have been fish smell. Karma was rolling about on the plastic bags. She paused when I got the camera out, of course. She's such a poser. 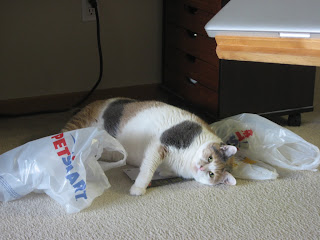 Here's the aquarium with all the new plants and fish! 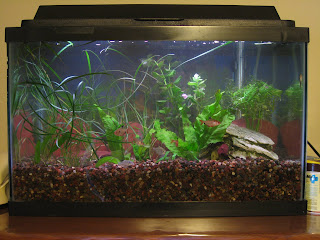 The water was still a little stirred up from all the planting, but my observations of Runt were correct. When the new tribe of tetras were released, Runt would come visit and then go his own way. Where the big tetra (formerly Traitor) was thrilled to have a school to hang with again. 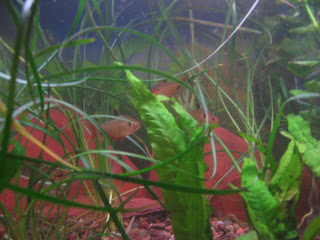 They aren't exactly the same type of tetras, but they are the same basic shape--just redder. Dagan and I had walked back and forth examining the fish available, but my choices were limited. I couldn't have any fish that grew too large, didn't want aggressive cichlids, shy angelfish, or livebearers that may overrun the tank with babies. There were several tetra candidates, but these being on sale for a dollar each was the deciding factor--LOL! 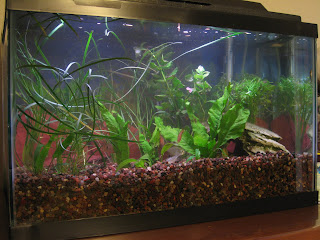 What an awesome video!! Amazing woman.

Your aquarium is beautiful. Love the fishies.

Beautiful video. My favorite quote is "Hatred eats the soul of the hater, not the hated." What a beautiful story. I'm hoping my library has a copy of her book, I'd love to read it.

Good luck with the new fish!

Glad you managed to get your pettstore trip in! :)

well, i hope all the tetras will do well together - loner or not. :)

AAh, what a sweet story of not judging too quickly, perfect for Easter.
Thanks for coming over to my blog, I appreciate your visit and comment. it was so nice to see you.
Best,
Jenn of www.JustAddWaterSilly.com

Karma is adorable - but you knew that already:) I have never had fish and I didn't realize how much went into having them.

When we first bought our house, the pump to the pond broke and all the fish died. The pond guy threw them out in the garden for fertilizer and Molly was out rolling in them. I thought it was odd but I guess it is normal for a nutty Corgi.

I thought Tetras killed each other? What do I know? So glad to hear you concluded the Dentist visit without incident!
Happy Easter tomorrow! :)

I like the finds from your shopping expedition; the acquarium looks great! Too cute with Karma rolling on the bags; its like Koda likes to roll on dead worms :)

Your aquarium looks great. I hope all of your fish have a happy life together, even Runt. :)

I love the end result of your trip! The tank looks fabulous!!! What an awesome kid you raised, to take such good care of his Mom. Karma always cracks me up, lol!

Dropping in to say HI and wish you a Happy Easter!!

I'm downloading the video to watch as I type this.

Far Side of Fifty - I think you're thinking of Betta fish also known as Siamese Fighting Fish...they will continually attack one another or other fish.

Have a lovely Easter weekend, Rita. I had more dramas which I'll write you about. Life is never dull here. lol

I have to laugh at the cat rolling in the fishy bags. My first cat did something like that when she was a kitten. I was cooking fish and let the opened fillet out on a plate on the counter while I prepared a pan. I glanced behind me to see her rolling in the fish. New dinner plan!

I hope you have a fine Easter. Thanks for all your blog visits. They're very much appreciated.

I hope you are having a good and happy Easter day, Rita. I am also so glad you made it to PetSmart successfully! Karma is such a lot of fun, isn't she? :-)

It must be so relaxing to have a tank of fish to watch. They are very beautiful and shapely creatures. I enjoyed your post:)
x

You're quite sure Karma can't swim? :D

Your fish tank looks beautiful! And the social dynamics will keep you occupied for a while each day too, I'm sure!

Dogs do love to roll in fish, the stinkier the better - nasty habit, but hey, if you only bathed once every great while, I guess you'd want to put on some strong smelling perfume too!