Error.
****
Okay. It actually IS an MP3 player. I was wrong. Or, actually, I was right in the first place, depending on how you look at it. I assumed that what I thought (MP3) had to be wrong because I have been giggled at in the past and that was what immediately came to my mind...so it must be wrong...right? So, I punch in M3P...the drop-down google list showed places to go that said "M3P player" as soon as I hit the "P"...that was good enough for me and my sore back...and...well, you know the rest. ;)
****
What did I learn?
****
It was a cooler afternoon in the 50s, but sunny and not so windy that it would blow the pages out of your hand if you were trying to read. I decided to spend some time on the porch with Karma. But...by the time I had gotten a bucket, moved the herb planters from last year down on the floor, scrubbed down the metal chair, two tables, and wiped down the green chair cover...I was sore and freezing from the wet hands...so I took a picture instead--ROFL!! 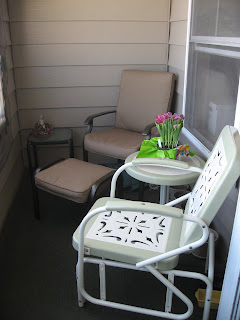 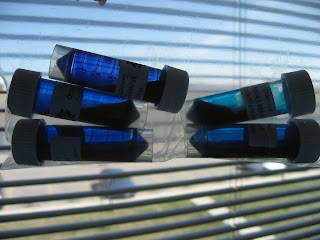 Various shades of blues this month. 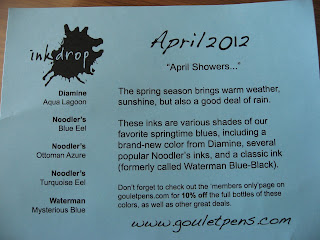 This is the huge bag Ruby brought my nightgowns and socks in for my birthday that I have been moving around the apartment... for Karma's entertainment, of course. 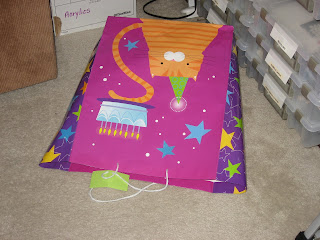 She likes to sleep hidden inside.
(Wasn't thrilled I disturbed her for this peek shot.) 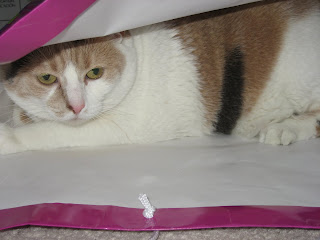 Here's the other pair of socks I got from Ruby in the fall colors. 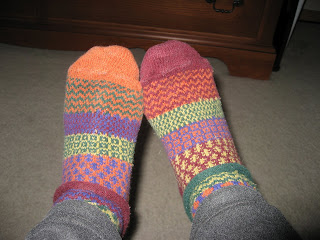 Seemed appropriate with how chilly it's gotten.
****
Anyways, Caroline came in the afternoon, CashWise came after that, and I put in my April orders yesterday. Was another less groceries month (I do have my priorities)--combined with extra birthday money--whoohoo! So, I have stamps coming (have to be able to mail letters and cards!) and more melatonin (it just might be working to keep me on regular hours--knock on wood). And--tada!--two orders coming filled with art supplies!! From Scrapbook.com and Dick Blick! So exciting! Of course, I'll show you everything as it arrives. :)
****
Well, if I bundle up in several layers and keep my hands in my pockets or wear gloves I might be able to go sit in the shade on the breezy porch for a few minutes (45 degrees). Glad some of you further south have summer weather already. Of course, those of you on the other side of the world are coming into fall and might be having weather closer to mine today--LOL! ;)
****
Regardless, it's a sunny, wispy white cloud day. The green is attempting to emerge up here. My back is feeling better.
Life is good. :):)
****
"There must be always remaining in every life, some place for the singing of angels, some place for that which in itself is breathless and beautiful."
Howard Thurman
Posted by Rita at 9:00 AM

So, have you let the cat out of the bag? :) I'm still giggling over the crap shoot (or should I say chute?) of a couple days ago (I'm catching up). I love your ever positive attitude, and your socks are very cool, too.

Whatever the weather, enjoy the day. Can't let a little thing 45 degrees stand in your way, can you now?

As for MP3 Players, I've never had one, don't know how they work; all I know is that the play music, yes?

Last week, it was so hot over here in England...this week, SNOW!
Typical just when my forget-me-nots are coming up!

The Cat in the Hat Knows a Lot About That is going to be replaced by The Karma in the Sack Glares a Lot About Grass. I'd watch that!

Cute socks - keep them tootsies warm. It is chilly and cloudy here today too. I had to pull my sweaters back out. I should have known better than to pack stuff away. I was convinced that the heat was here to stay.

Just goes to show that sometimes going with your instincts is the right thing to do. :)

Sounds like our weather today too... I think it's meant to warm up more next week again though. Mind you, yesterday wasn't too bad; a sprinkling of hail at one point, but mostly nice.

Our weather today is very chilly! A freeze is due tonight. I had my winter coat on again today!

It sounds like you have the gratitude thing working well. Good for you. :)

DL Hammons @ Cruising Altitude 2.0
Co-Host of the Blogging from A to Z Challenge.

That's what I need. A table and chair for my patio. One day my friend. I use melatonin also. It relaxes me enough to sleep. I have to much pain otherwise and I don't want an addictive substance.

It was really chilly here today. Temps in the 40s with a north wind that was brisk. The weekend is supposed to be better and then a colder week next week. We're getting our March weather in April this year.

You have a neat little porch there. I can see why you might love sitting out there. (i would prefer temps in the 70s tho)

I laughed at the picture of Karma peeking at you from inside the bag. My cats used to love doing that, too. Boots did that more than any cat I ever had. Will have to find a picture of him to show you sometime.

I'm glad you're sleeping "regular" hours now. I told my daughter she should try some melatonin. She told me last week she was having trouble sleeping.

Green...my favorite color...the color of growing things. Our lawn is quickly growing, and it needs mowed. Terri isn't allowed to mow, and right now, he's not even able to lift the 5-gallon jug that holds our lawnmower gas. I can't lift it without spilling gas all over the mower, so this should be in interesting couple of weeks. :\

I'm glad you're back is feeling better. *hugs*

Karma definitely looks perterbed with you. Quite a catitude.

Can't wait to see what new goodies you get this time!

That is so cute with Karma sleeping in the bag!! Too funny!! I like those colorful socks and I like your porch area! Looks nice! Now only if it would stay that way until you have a chance to enjoy it!

At least your porch is now all set for the next nice day.

So nice to hear you feeling better and a bit sassy!!! Love it! I think being on days and sleeping more soundly makes EVERYTHING better!

Doesn't it just figure that you get the porch all clean and spruced up and then you're too tired & cold to enjoy it, lol! Oh well, it will be all ready for next time.

I'm engrossed in my own project and it's not much fun, but necessary. OCD is such a pain sometimes!!! LOL! Hugs!

When you I read "farther South," I went your profile. Fargo, eh? Wow. I lived in Minneapolis for two years, which seemed like a lot to me, but then I didn't even like winter in south Mississippi, so you can imagine how thrilled I was to live in a place that actually had enough of a winter for the word to be meaningful.

P.S. "Just a note: I don't pass on awards..." You know, that must be pretty much died out. I used to get them, but didn't display them or pass them on. Now, I don't get them ever, but I don't see them much on other people's blogs either. I think that maybe they died of overkill.

Every time I see those whimsical socks, they make me smile. I hope you have a wonderful Easter weekend, Rita.