Good Morning!
I thought I would shock everybody by actually joining in with the tea drinkers over at Elizabeth's on T Stands For Tuesday today.  Usually my thermal mug sits patiently with me in the mornings while I journal... 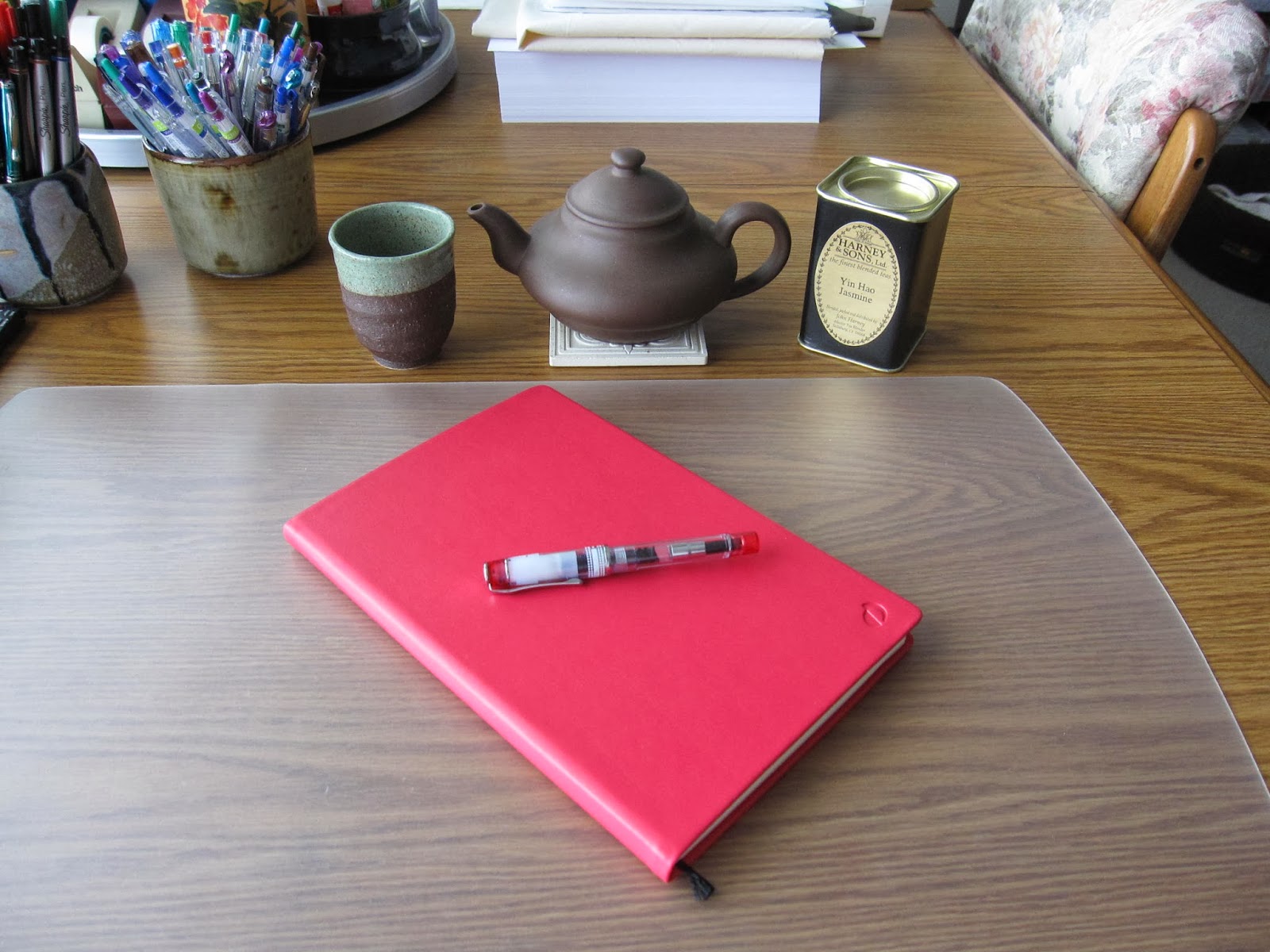 ...but this morning I made some Yin Hao Jasmine tea... 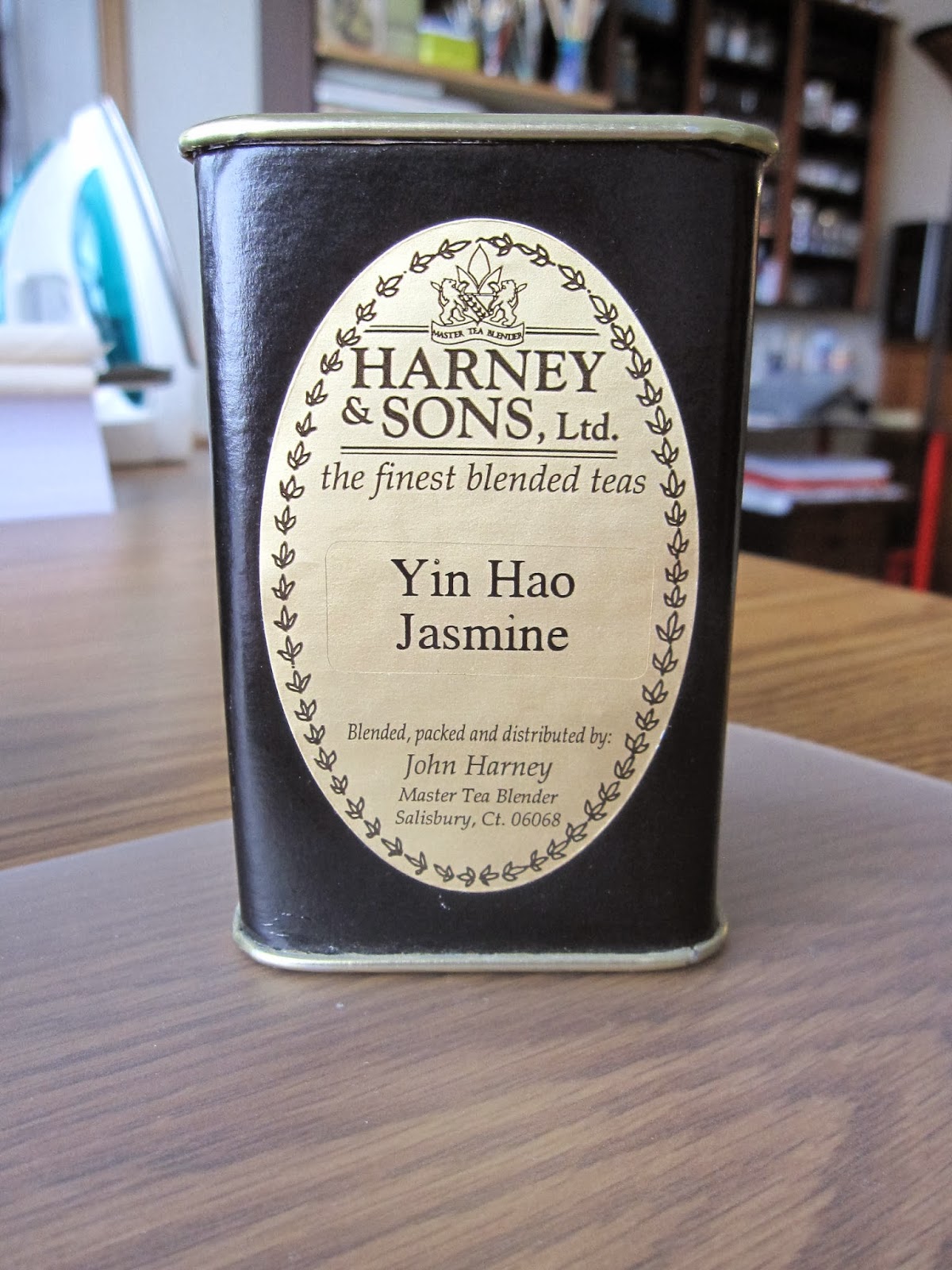 ...in my little Yixing tea pot. 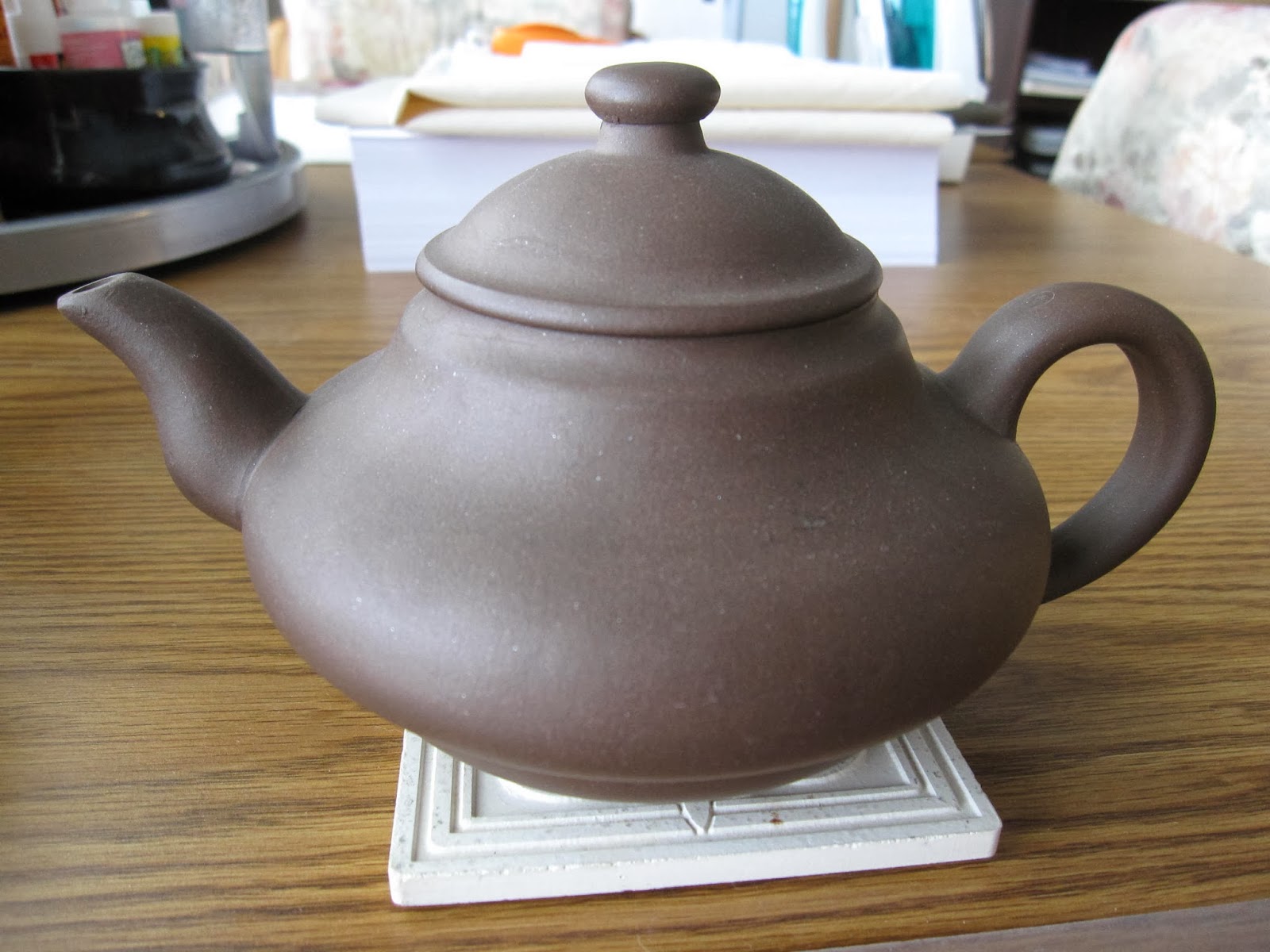 I apologize to anyone who can read Chinese if the seal is upside-down. 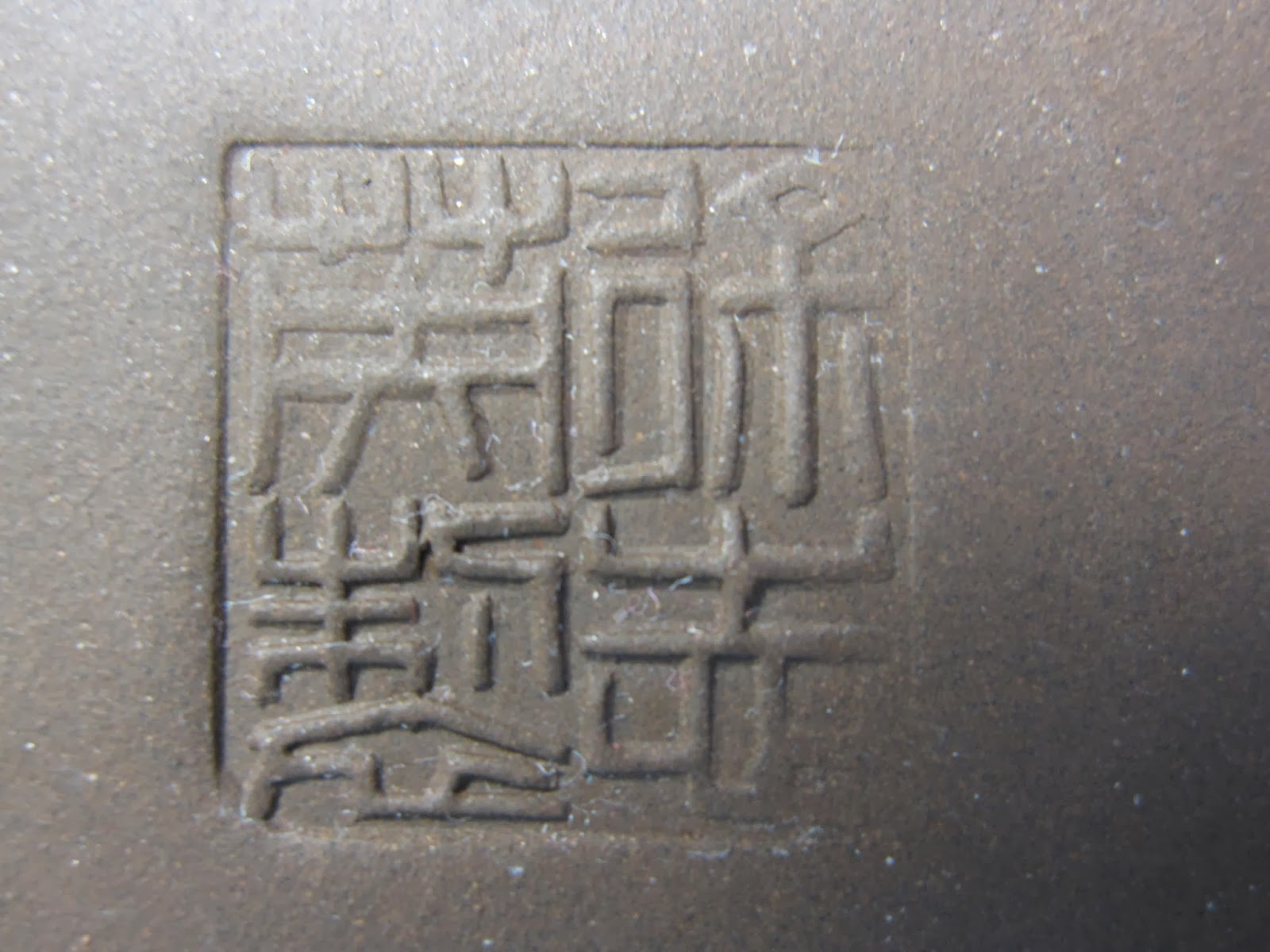 The cup I'm drinking from I actually found at Tochi's in Fargo years ago. 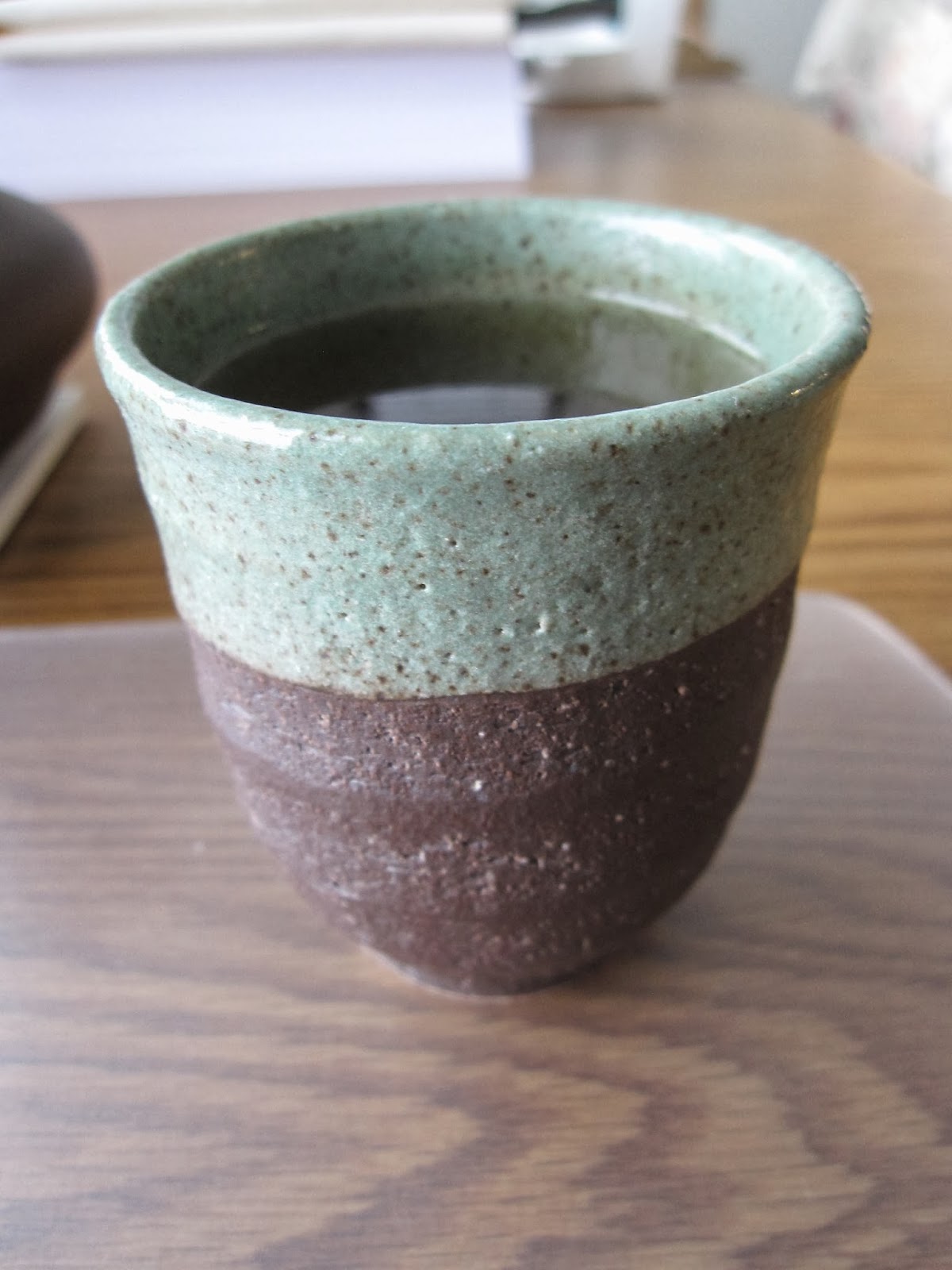 I love how it is partially glazed and rough to the touch.  I bought two of these beauties. 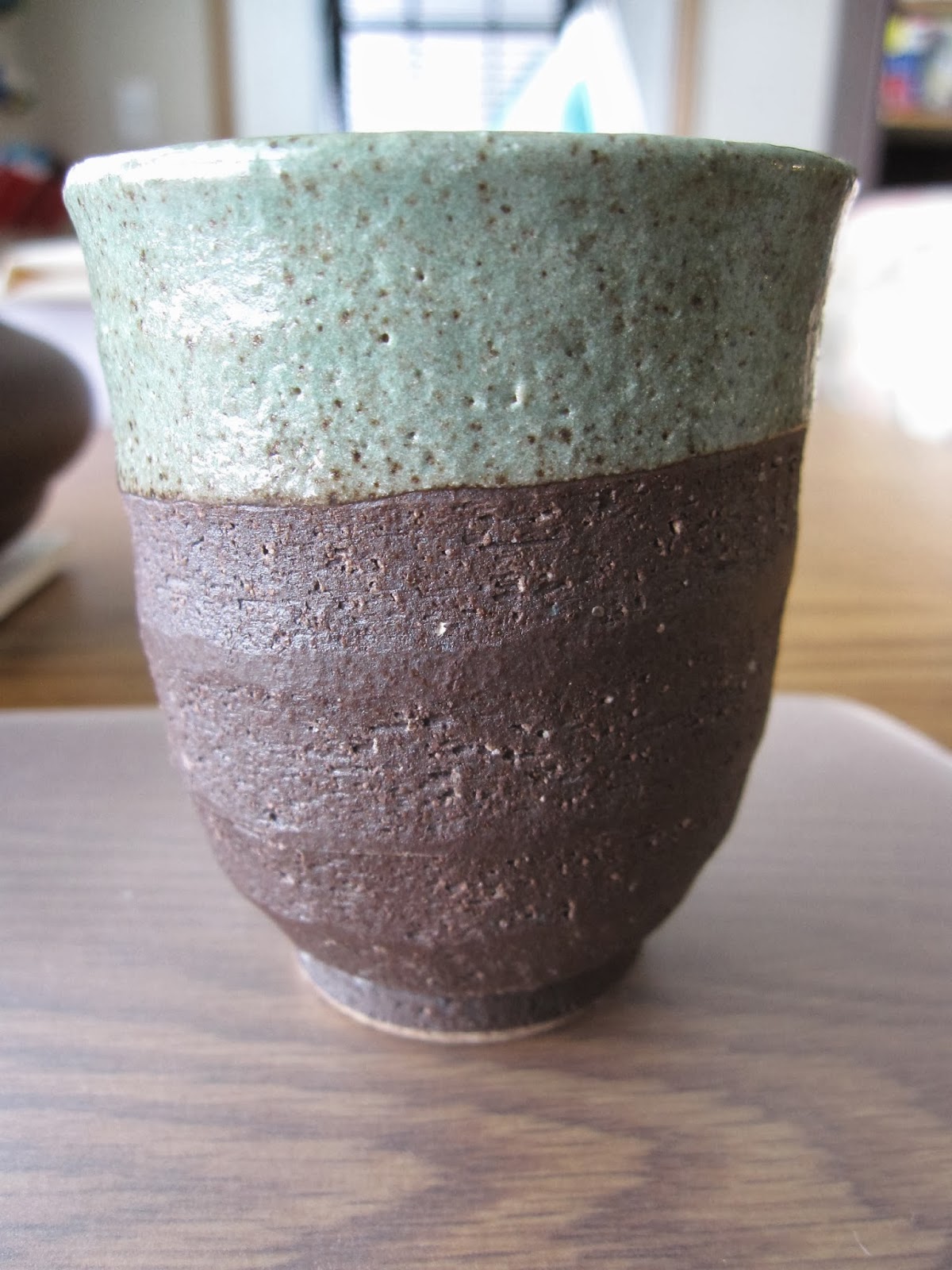 The makers seal on the cup is probably upside-down, too.  I obviously cannot read Chinese. 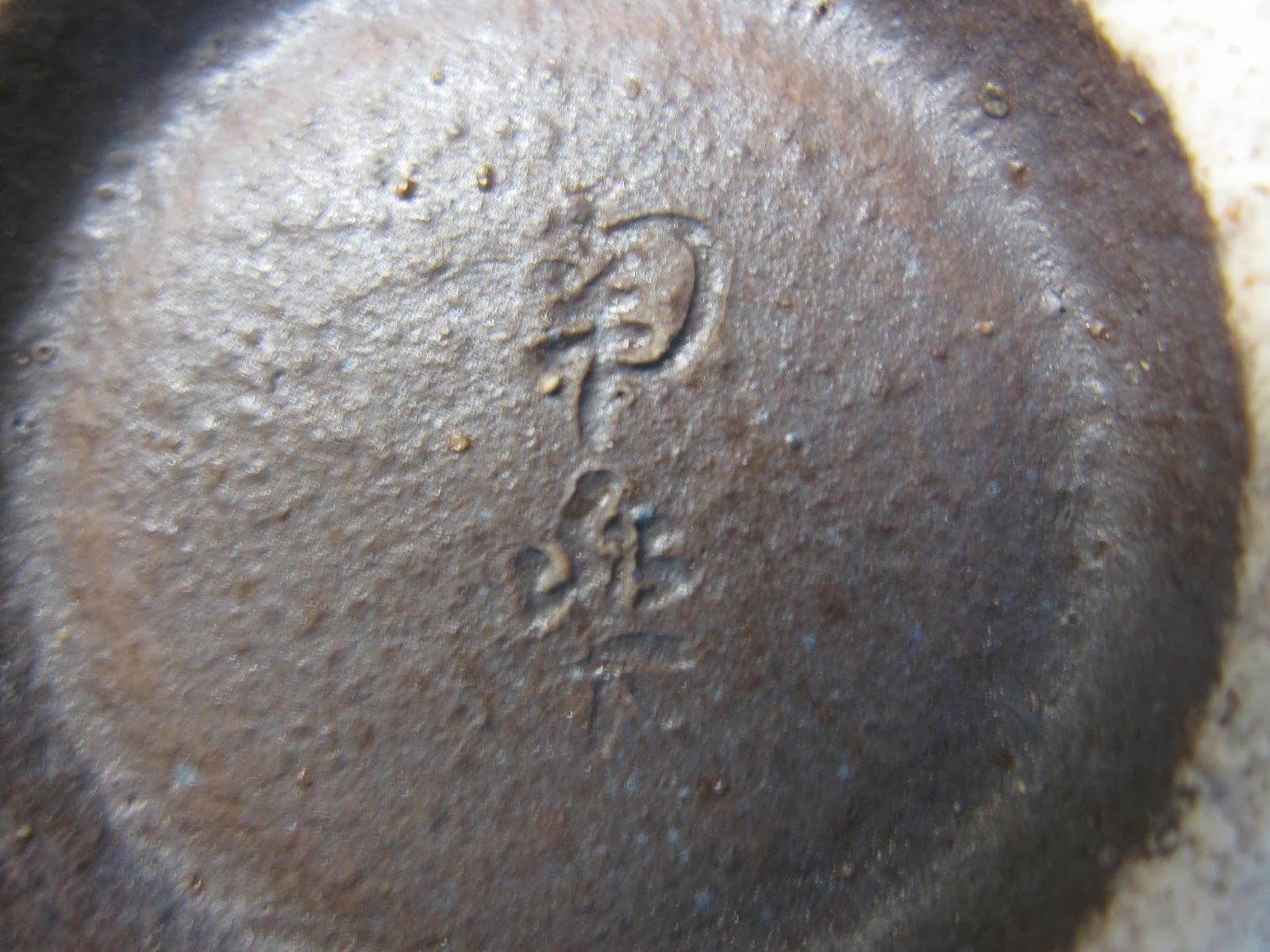 I know.  You're probably surprised that such a Scandinavian born with coffee flowing in her veins would have tea paraphernalia--but about twenty years ago when I was working at the factory where I injured by arm I worked next to this fascinating middle-aged man who barely spoke English and always had tea next to his machine.  I think he was from Thailand, but I don't trust my memory to swear on that.
****
No one else would talk to him.  It took a while to understand the thick accented English, but he didn't mind repeating if I asked him.  Slowly I discovered that he had sent home for a young wife and they fought all the time, he said, because she was not a traditional wife.  His disappointment was deep.  The young wife embraced the American music and dress and, worst of all, a bad attitude and defiance of his authority.
****
He missed his homeland to his core.  He told me how a goat fell through the thatched roof one day while they were eating their meal--threw his head back and startled me with his rich laughter.  I wondered what other joys his sad heart had tucked away in that narrow chest.  I would listen as he explained an alien belief system that included things like dropping blood in pans of water to foresee something or other...and burying something in the ground for a year and checking it before they decided to build on a piece of land...all the details are sketchy now.  I think I wrote a few of his tales down back then, but I don't know where.  If I run across them I will share them with you.  :)
****
Because of my friend and his constant offering me some of his tea (and it wasn't as horrible as I imagined--LOL!), I became became very curious about tea and joined The Tea Club for a couple of years and got their magazine The Art of Tea, too.   (I wonder if they're still around?)  I discovered that teas are as complicated as wines (which I know nothing about).  It makes a difference where they are grown, when they are picked, how they are treated after they are picked and for how long...and whether anything was added to them (like jasmine flowers).
****
I was lost in the maze, but I did learn a smattering about premium teas--and still have a shoe-box sized container filled with tea samples that I have always kept in dark, dry, cooler spots.  I discovered that I consistently loved most white teas, jasmine, and chamomile--and that I tend to like my teas black/plain like I like my coffee...but there are a few that need a dash of milk to tone down the sharpness.  (Each tea came with a card telling you what the optimum steeping time was and whether to drink it with or without milk.)  Joining T-Tuesday gives me a really good reason to try to make up a little bit of tea every week, doesn't it?  ;)
****
As usual, I digress--LOL!
****
It was warmer for a couple days--in the 20s. 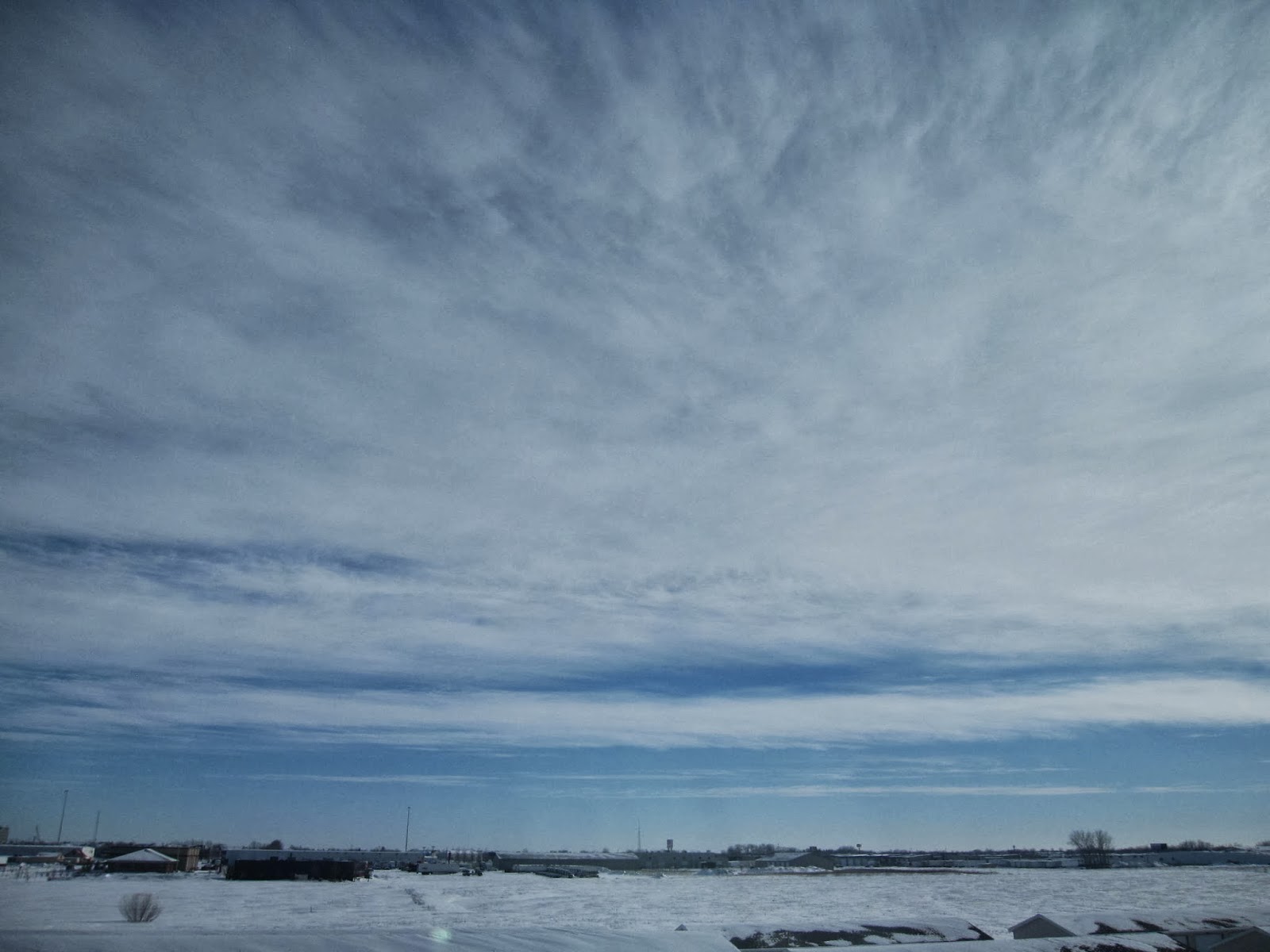 We've had snow, a little sun, and a lot of clouds. 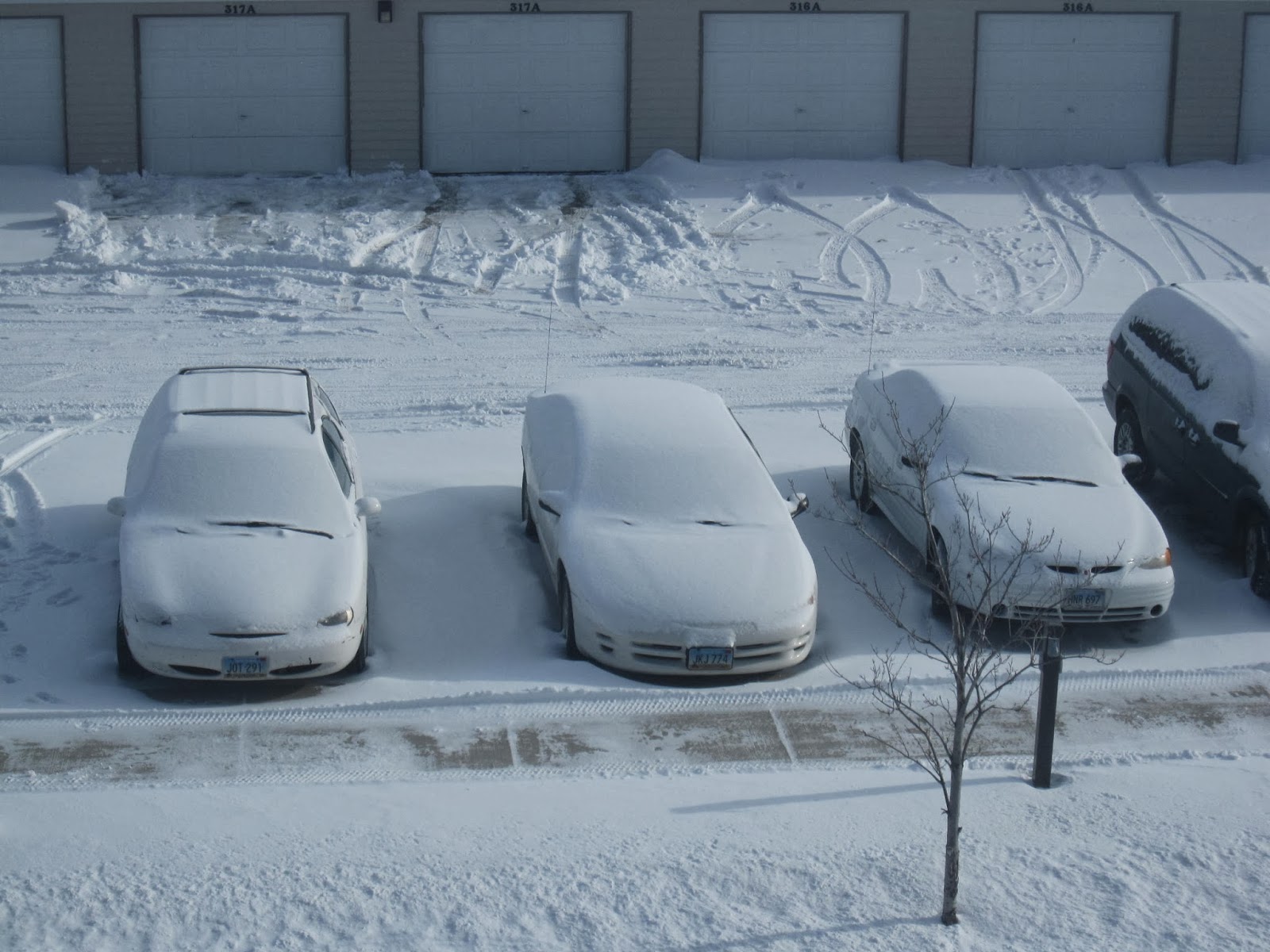 When we have sunny mornings, as you can see, it is almost impossible to take pictures of Miss Karma waiting for swallows on a warm 28 degree morning because of the bright reflections. 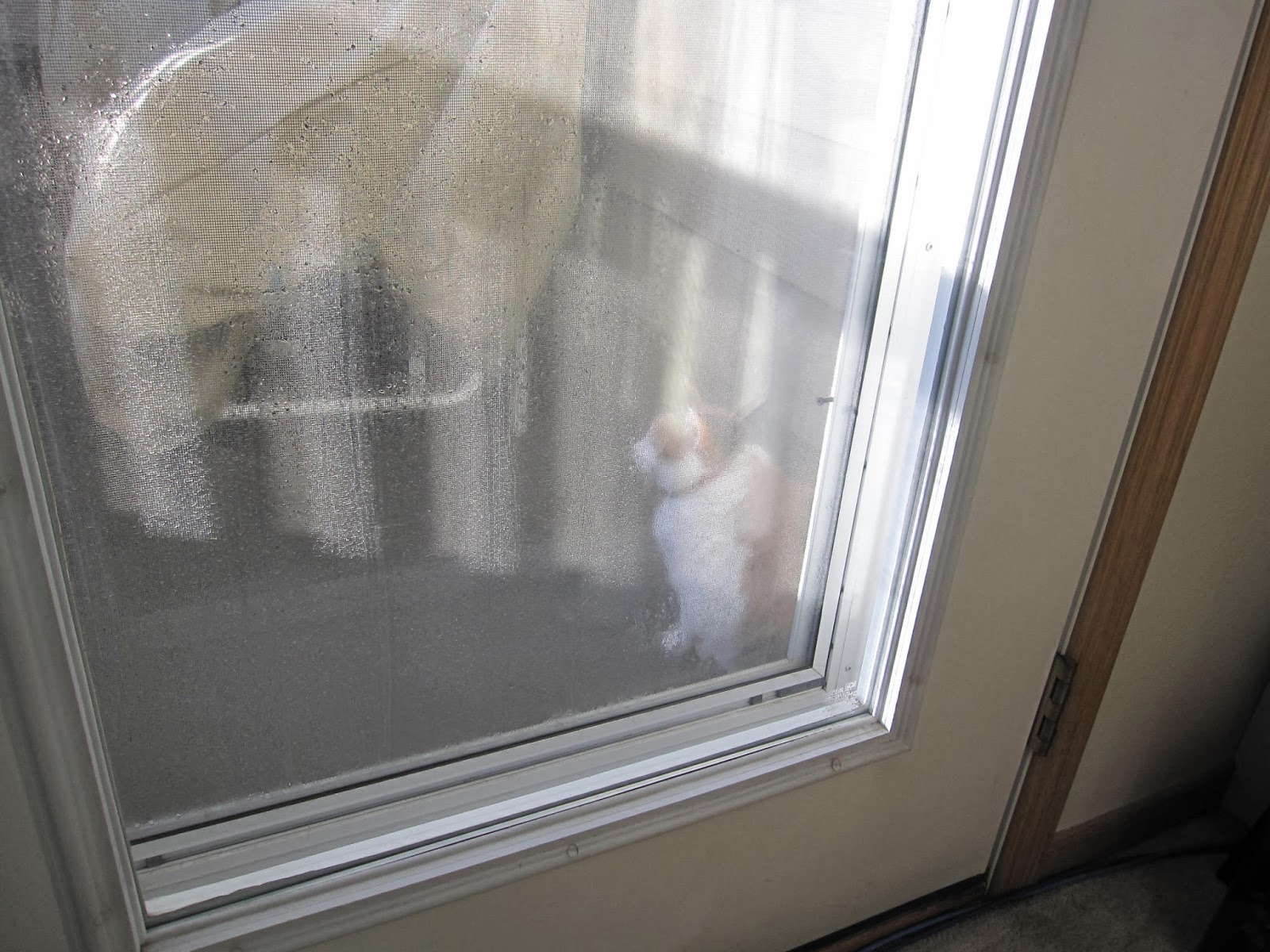 Karma was running around here chock-full of beans thinking it was spring again--LOL!  But then it dropped back down to 20 below--hehe!
****
Me?  I did finish one step in a huge project.  Managed to iron on fusible interfacing to the backs of some pieces of the faux-suede... 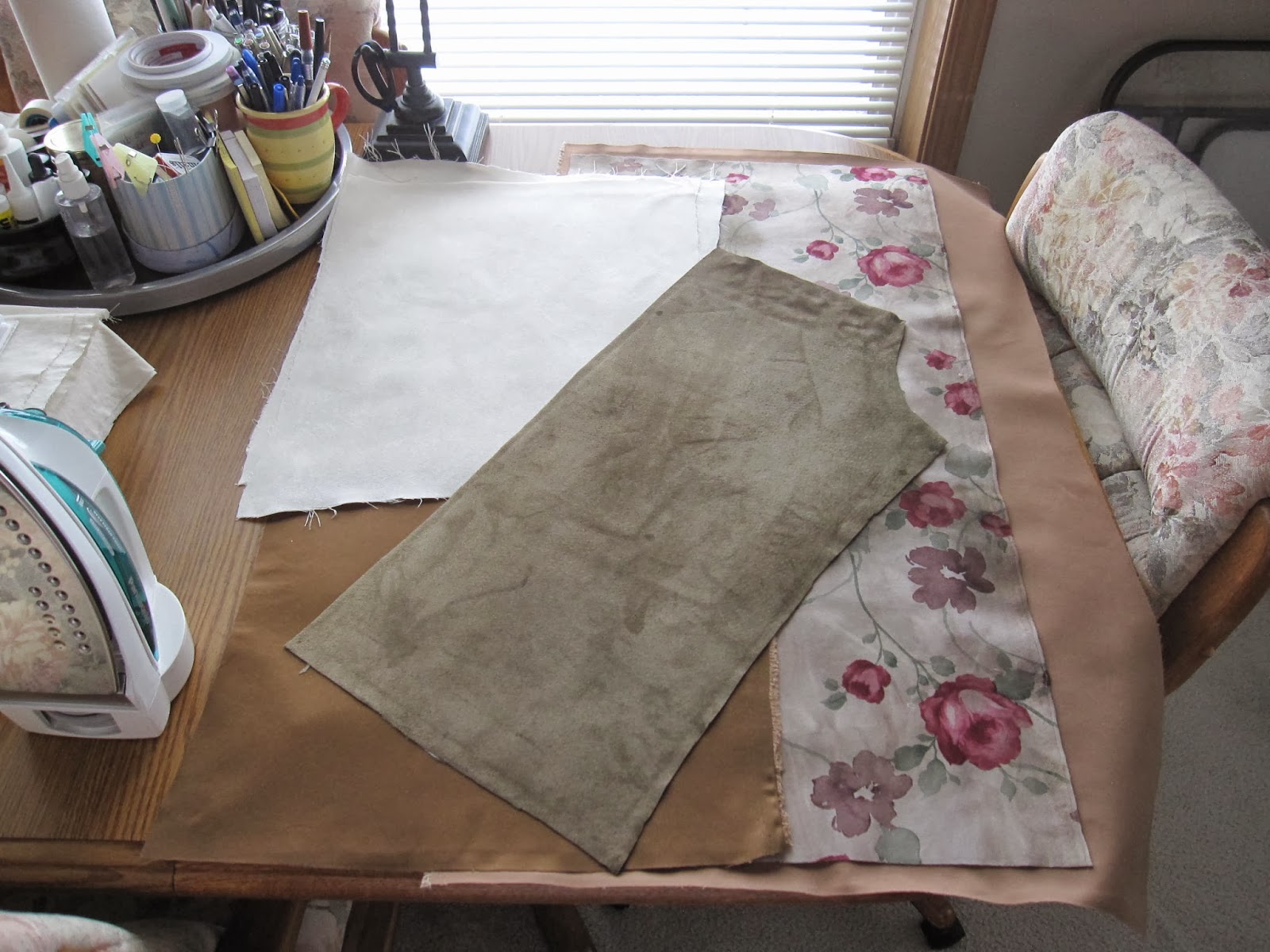 ...and a hunk of worn green leather from the back of an old coat (Leah brought over several years ago to add to our leather scrap bin). 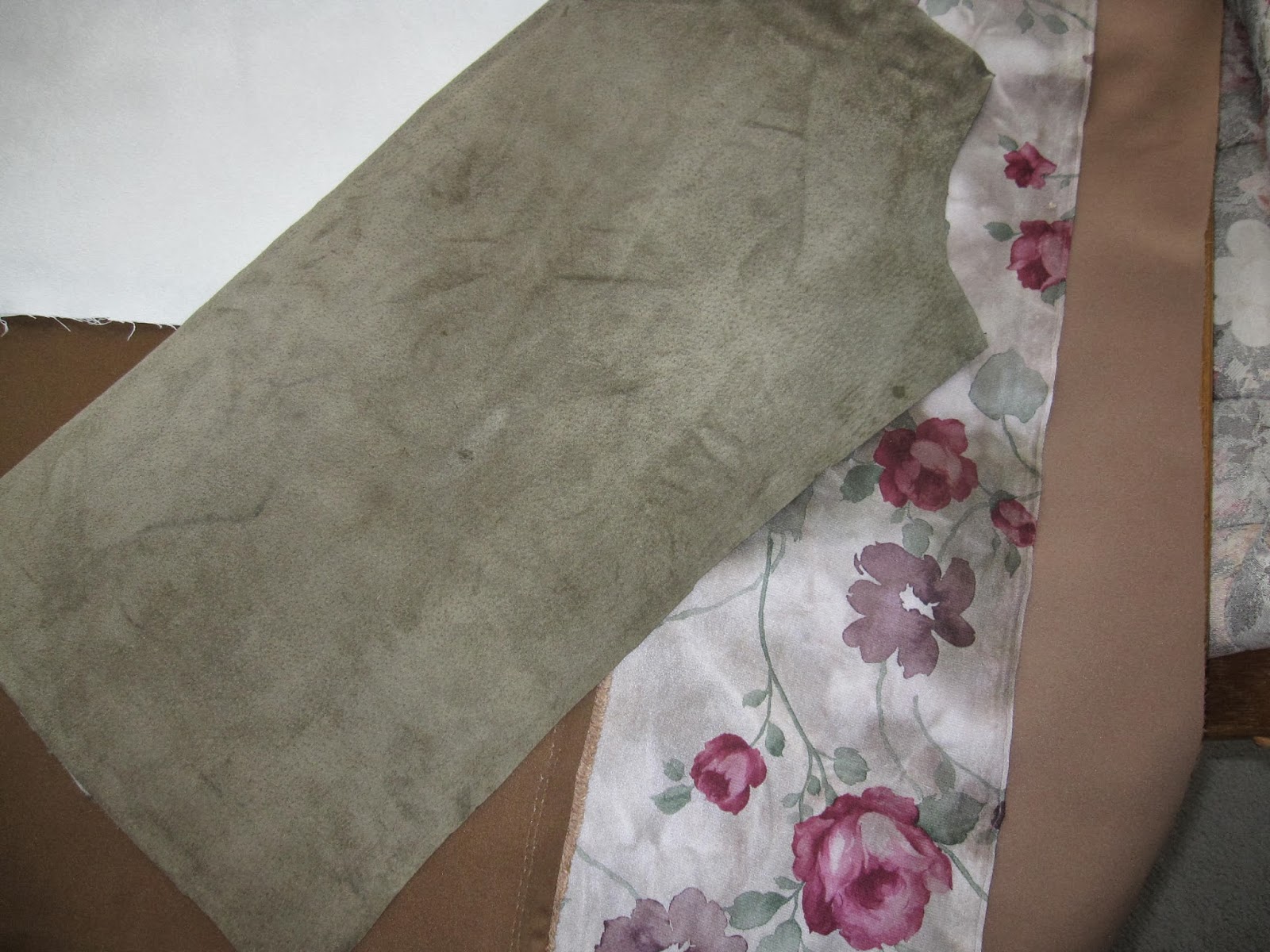 I only had three small packages of fusible interfacing to use that I had ordered from Amazon over the last year or so.  Didn't want to buy a big amount until I knew if my journal cover making plan was actually going to work or not.  ;) 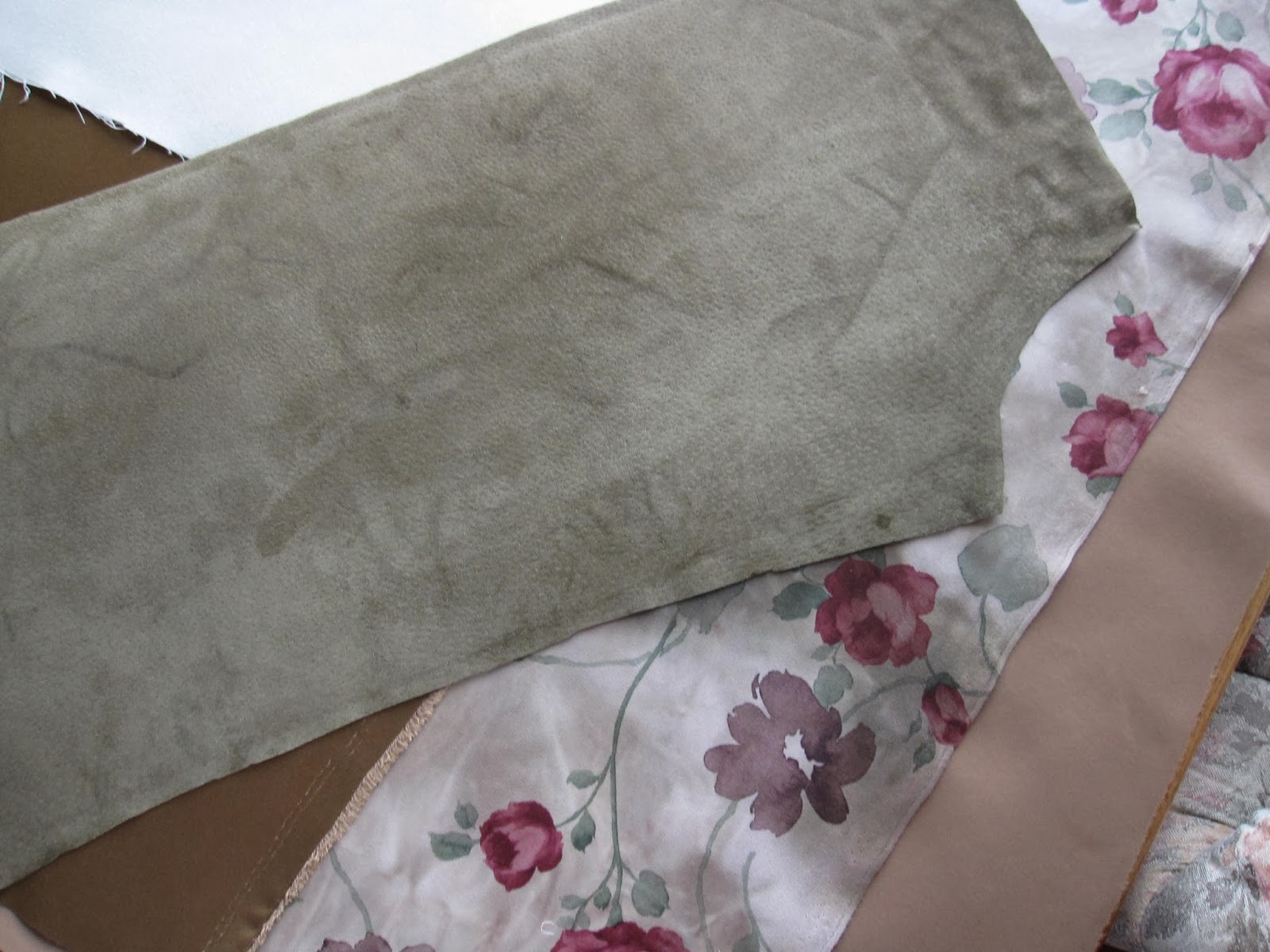 I have had it in my head ever since I made my first coptic journal--what?--4-5 years ago?--to make some writing/dry media/drawing journals with cloth/thin leather covers.
****
Okay--I apologize--this post keeps growing on me--LOL!  I'll be lucky if I finish it today--hehe!  Some of you may remember that one of my early coptic journals was made from this thick red leather that was in Leah's leather scrap bag purchase.  I had to dig it out and show you.  This is one of my darlings that I have been unable to actually use, to be honest.  Here she is... 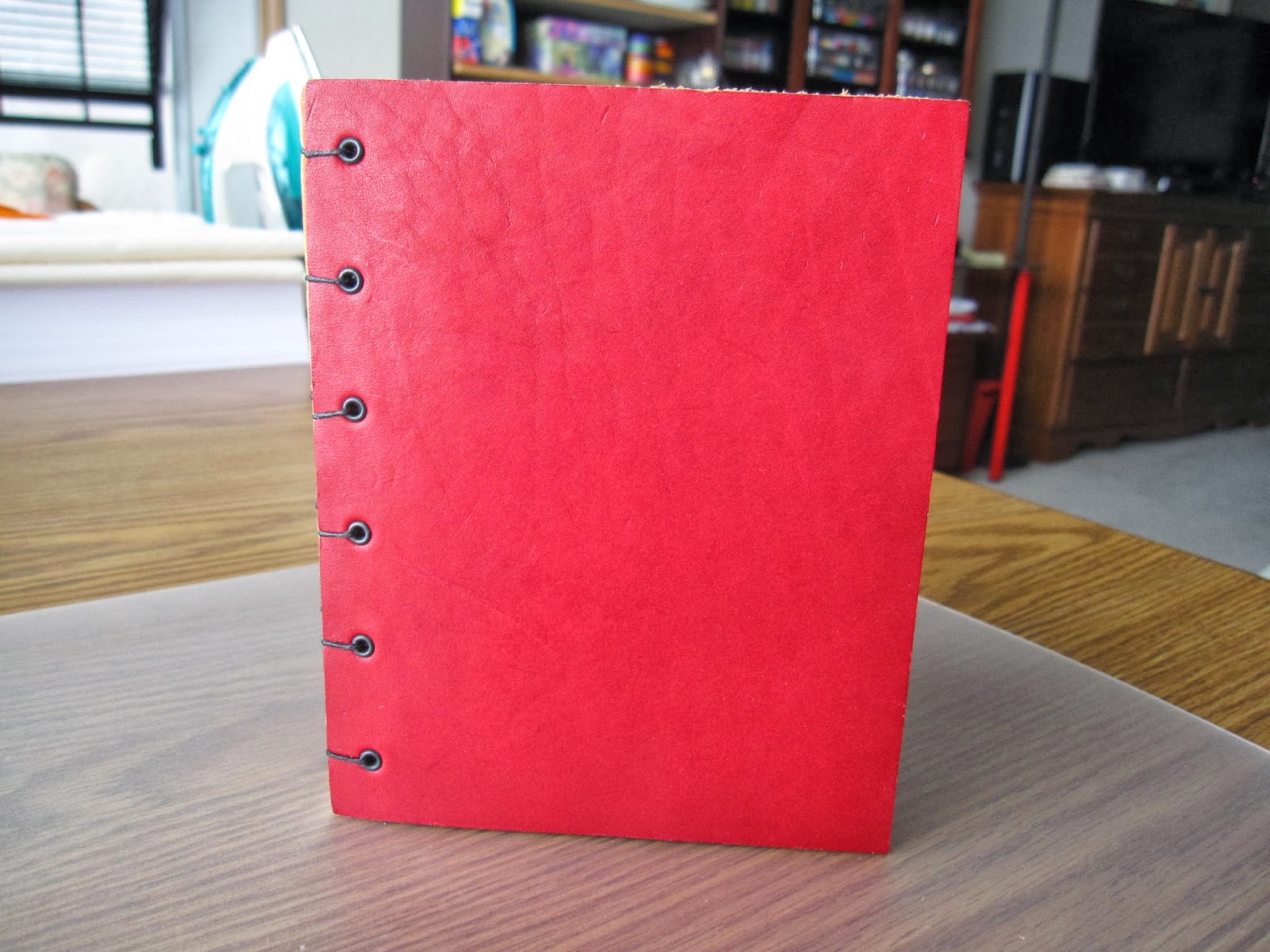 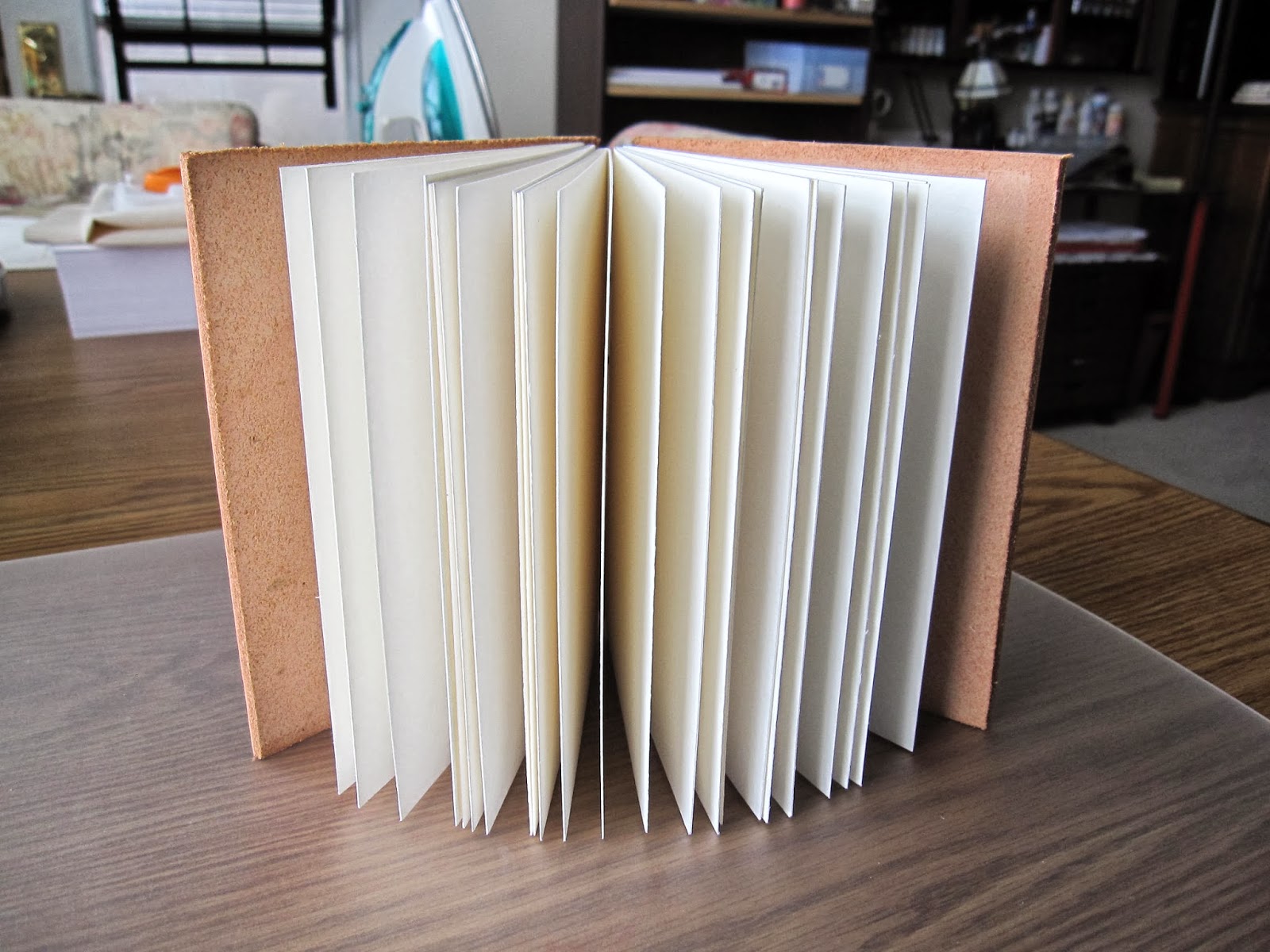 ...complete with mistakes made while learning coptic stitching. 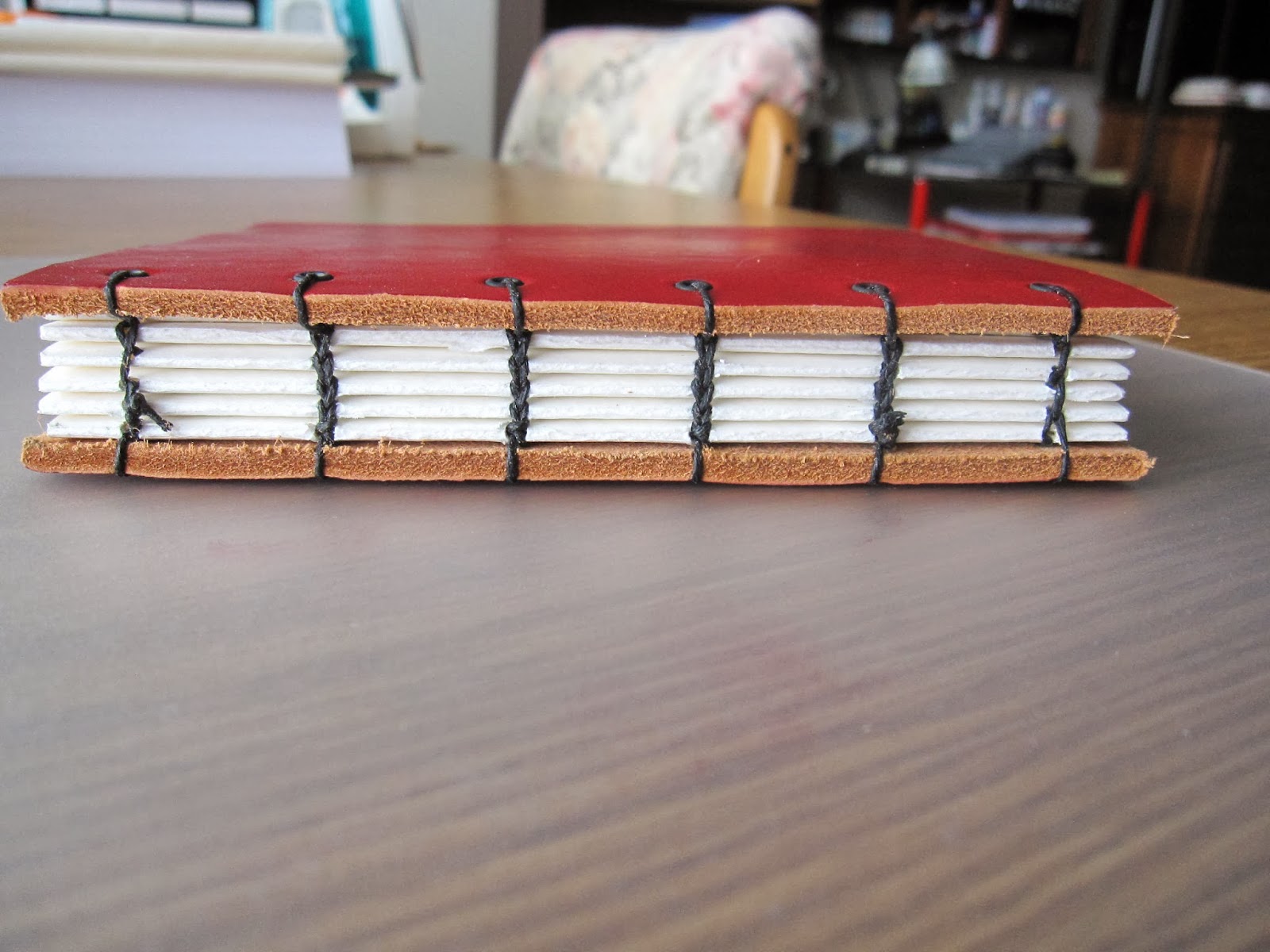 I just love her! 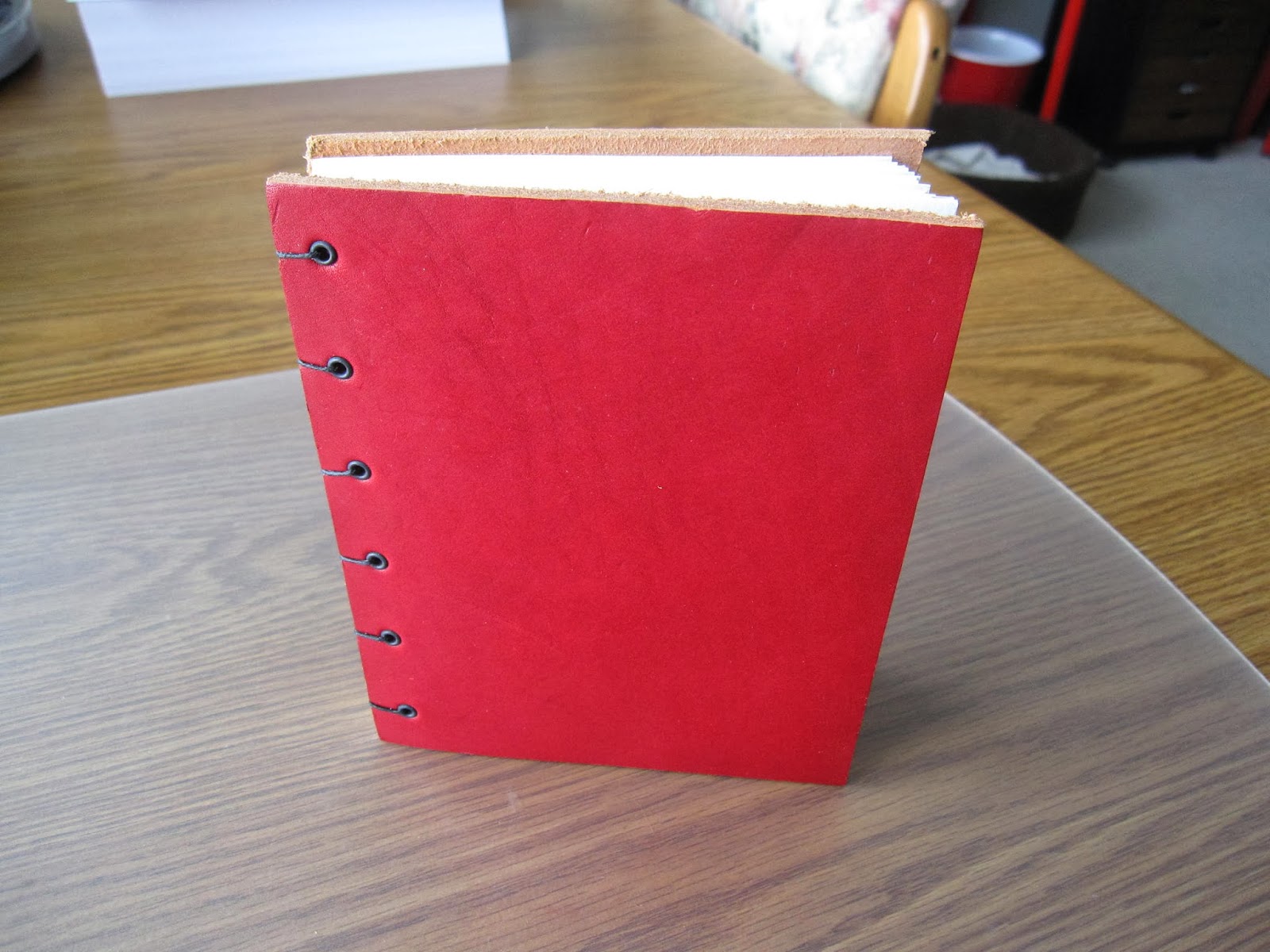 That's when I searched and found Volcano Arts online.  They were the only place I could find back then that had longer eyelets that could go through this thick leather.
She just needed eyelets, right? 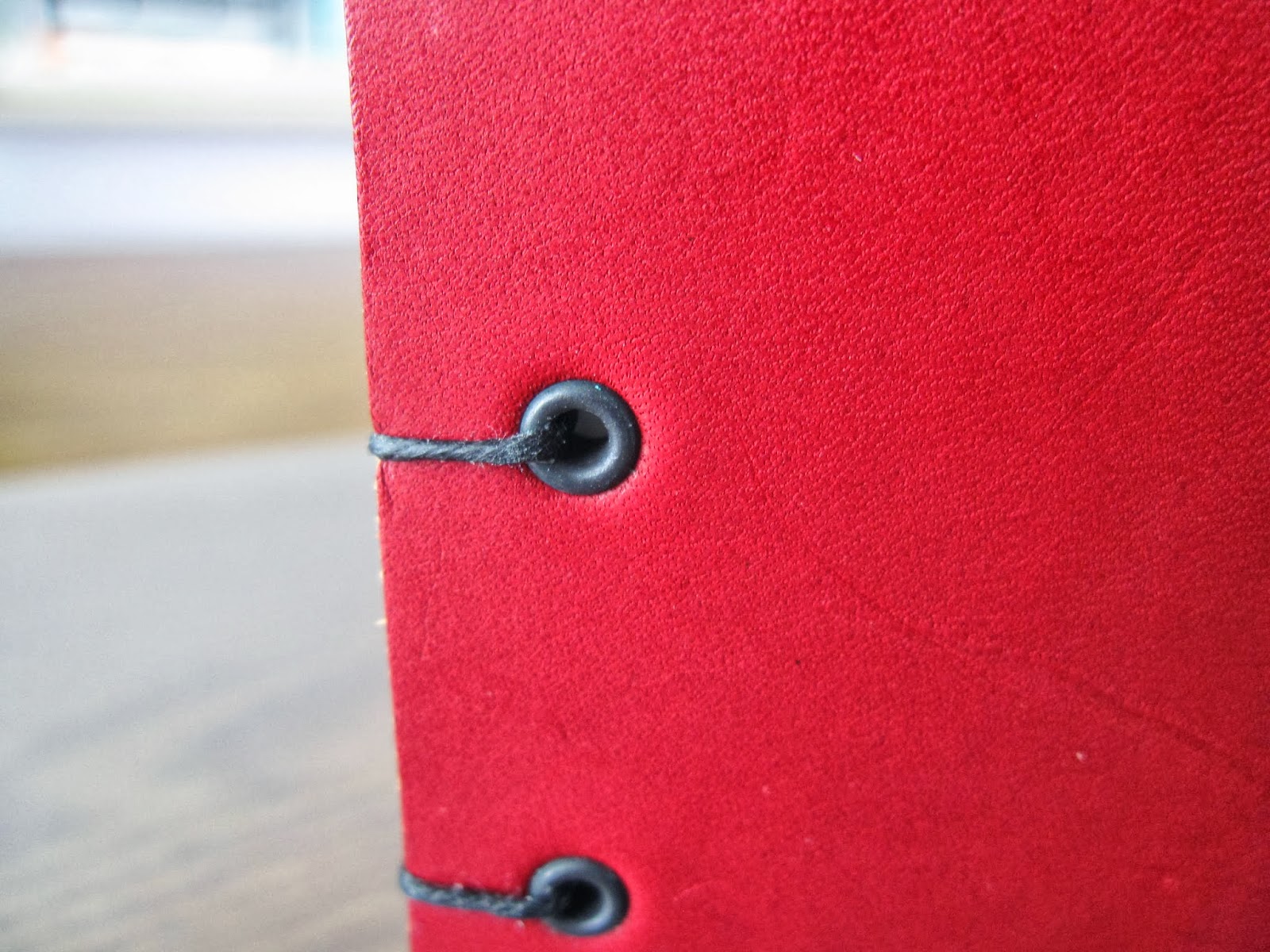 My little red darling.  And she is little.  Only 4 3/4 by 6 inches.  (All my first journals were quite small.)  I tucked her safely away from my clumsy, juicy-watercoloring hands.  Maybe the time has come to very carefully kill my darling?  ;)
****
What a journey this morning!
****
I watched Derek on Netflix streaming and have been thinking a lot about kindness...
****
Okay!  I'd better stop right here and now before I go off on another tangent or something triggers another memory--ROFL!  Have a wonderful week!!  Do you have a hard time killing your darlings?  Do you have favorite things you love too much to use?  ;)
****
I think I have posted this quote before, but I do love it.
****
"Be kind, for everyone you meet is fighting a great battle."
Philo of Alexandria
Posted by Rita at 1:04 PM