The world is white and gray.
It's ten below.
Karma is tired after I kept her up till 2am last night... 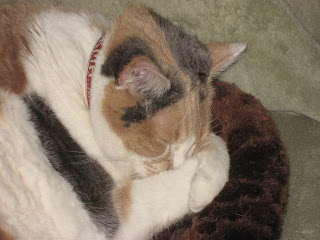 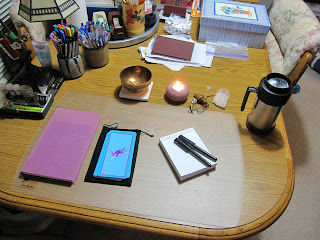 I write down the positive things I/we might need help with in the coming year.  (I often ask for other people...and critters, too...even the earth.)  Then I focus on them one by one, touch the paper to the flame of the candle, and drop it in the copper burning bowl to send the request off into the heavens.
****
Next I use one of my pendulums to pick an angel card.  This time I used the wooden one.  It is filled with multi-colored sand from the Tibetan monks when they were at Concordia college about ten years ago.  They worked for days on a beautiful, vibrant sand mandala--had a blessing ceremony--destroyed the mandala--and then gave away teaspoons of the sand to anyone who wanted some.  (They saved most of the sand for the final ceremony they do near water.)  They were the calmest, most loving people I have ever met.
****
I digress.
I am a known digresser.
Sorry--for keeping you in suspense.
****
The card I got was absolutely perfect. 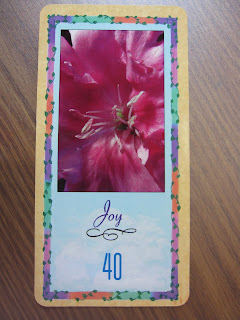 Joy
****
After saying they were never having children...
and ten years of marriage...
Dagan and Leah changed their minds...
and Leah is pregnant!!
****
I was sworn to secrecy since Ruby was here summer before last--well, Ruby and I were both sworn to secrecy.  Dagan and Leah told Ruby and I together that they planned to start trying in the fall (of 2012).  Leah and her sister Michal were going to start trying at the same time.  (As you may recall, Chuck and Michal had a baby boy in 2013.)
****
This last February my dear friend Ruby died suddenly.  I got the shocking call right before Dagan and his friend brought over my new recliner.  Dagan's friend left, Leah arrived--and I was just kind of stunned and numb.  There's a kind of empty sadness when you lose someone who can practically read your mind...really "gets" you...knows all your flaws, but loves you regardless and always supports your soul.  Unconditional love.  We had that for each other.
****
I was in a kind of void.
And that night Dagan and Leah decided to tell me she was pregnant!
Such sadness--then such joy!
****
But very shortly afterwards, Leah lost that baby.
****
2014 has been an emotional roller coaster.
****
She quietly put on the baby shower for Michal's baby.
You may remember us making the baby shower cards.
Unlike her gregarious, open-book, chatty MIL--Leah keeps her feelings pretty close to the vest.  But I know it was a difficult time.  I've been through it, too.
****
They decided not to try for a while to let her body heal--and I heard nothing more about it.
****
Until they were here helping me sort through the junk drawer boxes.  Dagan casually says--Oh, by the way, Leah's pregnant again.  Whoohoo!  But I couldn't say anything publicly until she was past the three month mark (end of December).
****
It is an extra happy new year!!
****
In 2014 Dagan and Leah will be happily married 12 years, Dagan will be 40, Leah will be 35, and I will turn 63.  Those facts alone are enough cause for celebration.  :):)
****
There are a few of you reading this who actually remember when we used to celebrate Dagan living one more month with cake and coffee...until he got old enough to catch on that the gathering had something to do with him and I was afraid he'd think he had birthdays every month of his life--LOL!  He doesn't like it when I get all soft over how amazing it is that he is even still here at all...but he doesn't hardly ever read my blog...and moms have a right to get gushy and emotional sometimes, right?  He is still a miracle.  He will always be my special boy.  Patched and repatched--pacemaker and all the surgeries--he has survived.  Fooled them all!  Passed by every gravestone marker they had erected for him--LOL!  Until they quit predicting.  ;)
****
And now there is going to be this huge shift in their lives.
Dagan and Leah will never be the same.
Their hearts will expand to places they never imagined.
****
Please say prayers for all of them.
****
With love and joy...
Happy 2014!!!
****
"The bond that links your true family is not one of blood, but of respect and joy in each other's life."
Richard Bach
Posted by Rita at 12:40 PM