Greetings!  Lots to show ya!
We had some distant rain. 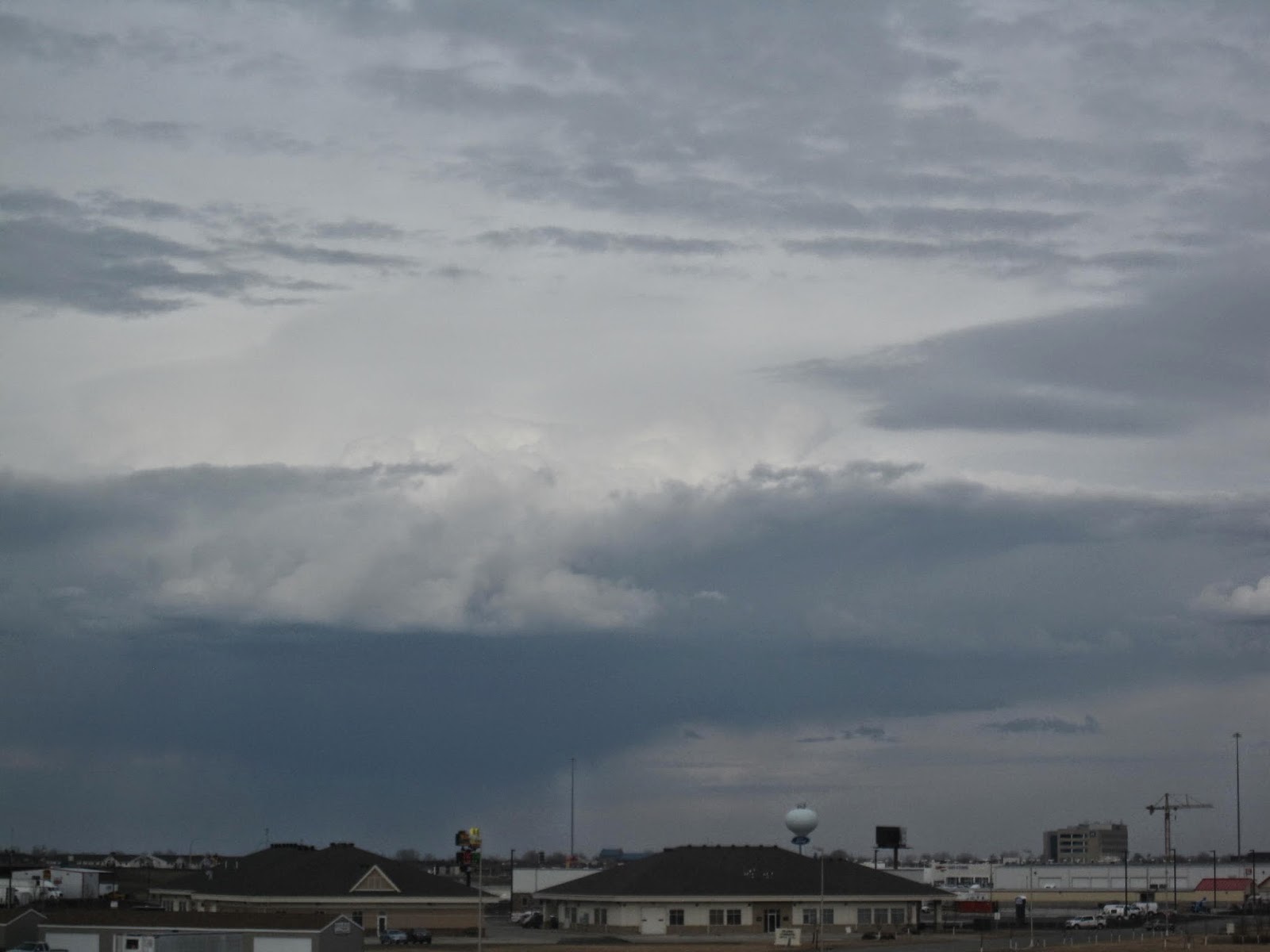 Could smell it in the air and the clouds were magnificent. 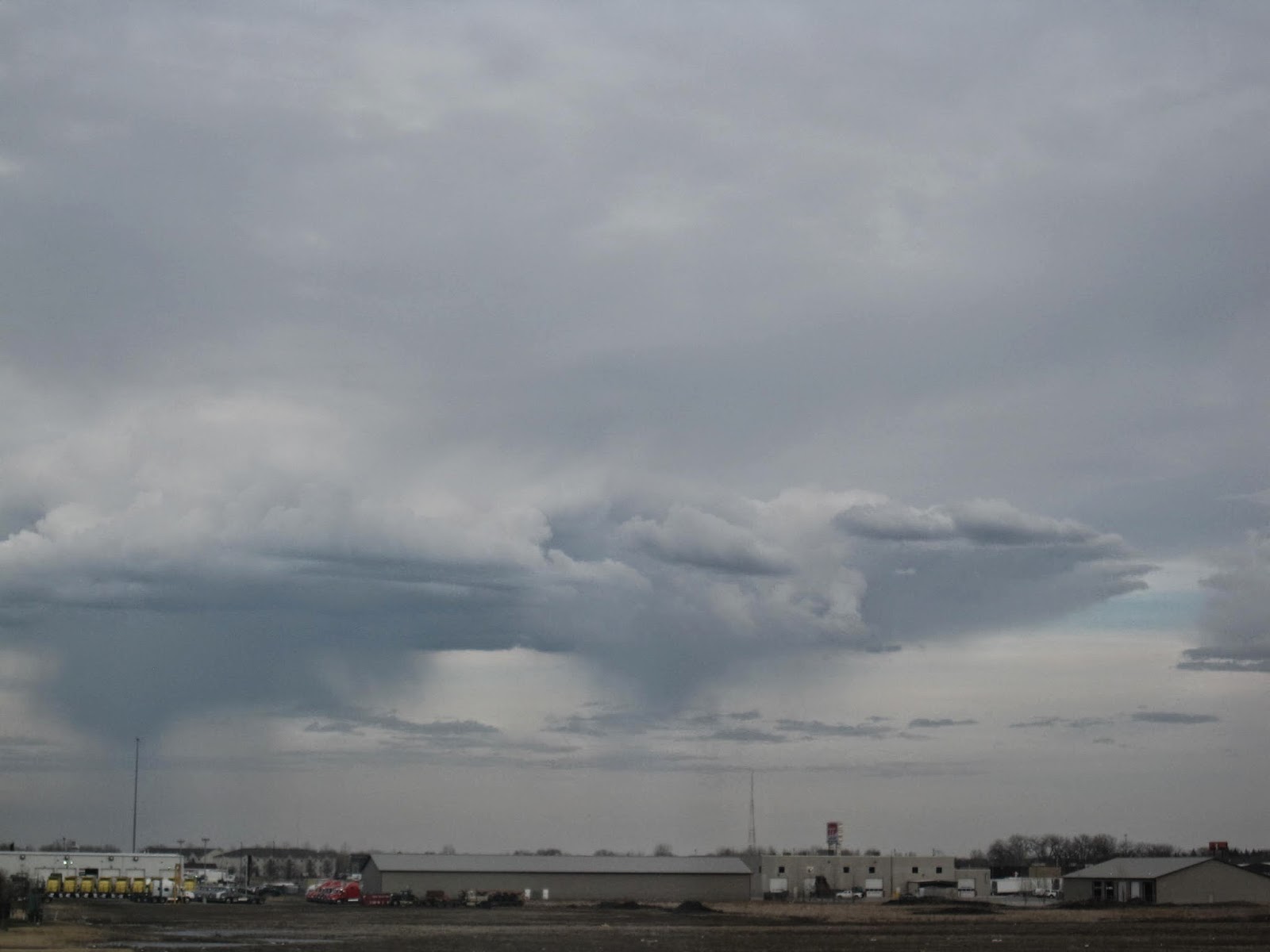 Okay...with some of my birthday money I did order Miss Karma a new brown mat bed identical to the one she already has.  You know how with a cat it can never be in the right place when they want it?  She wanted it on the TV tray by the window and on "her" chair...whenever she chose to change position.  Well, it looked the same but it smelled all wrong. 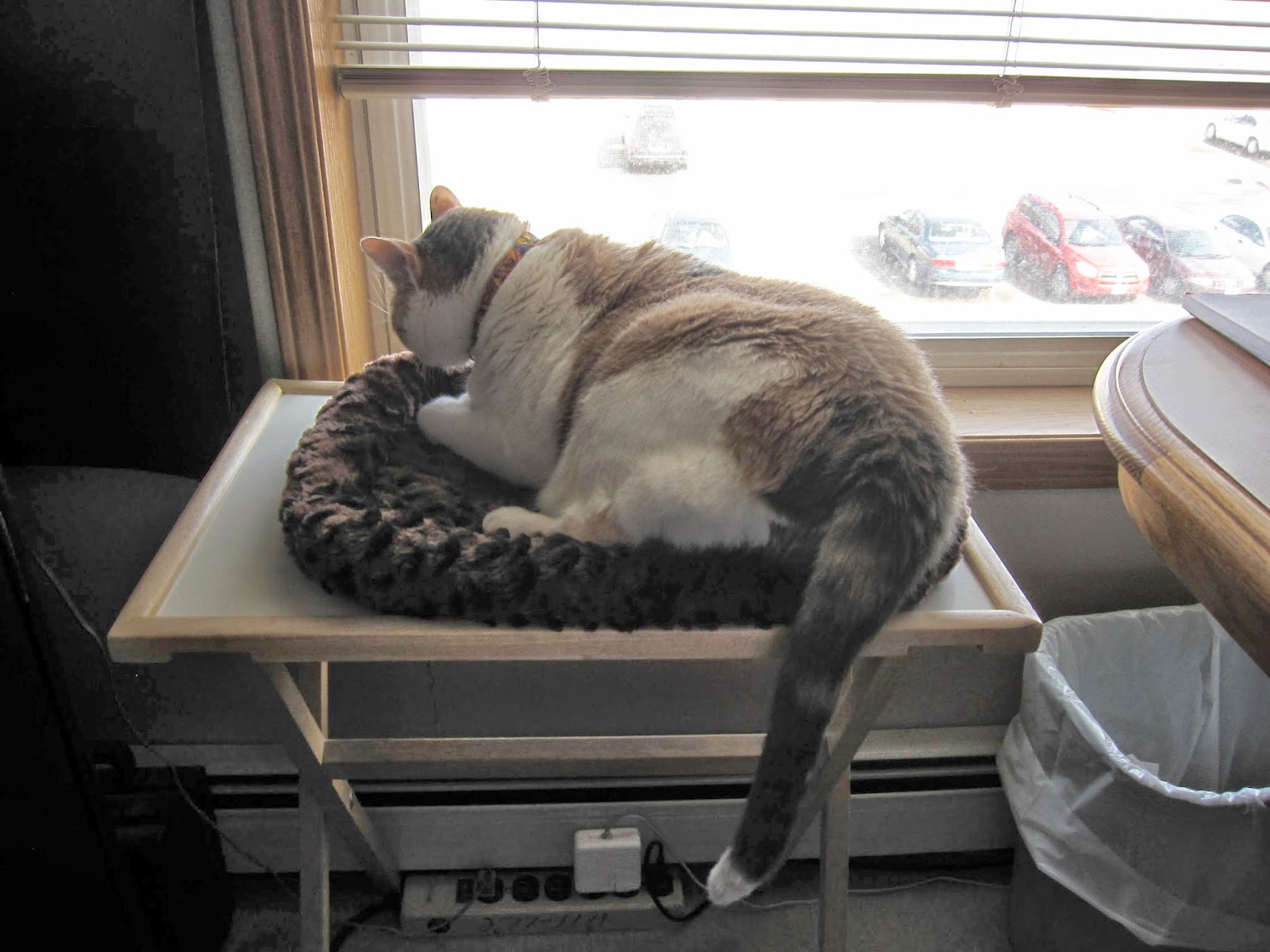 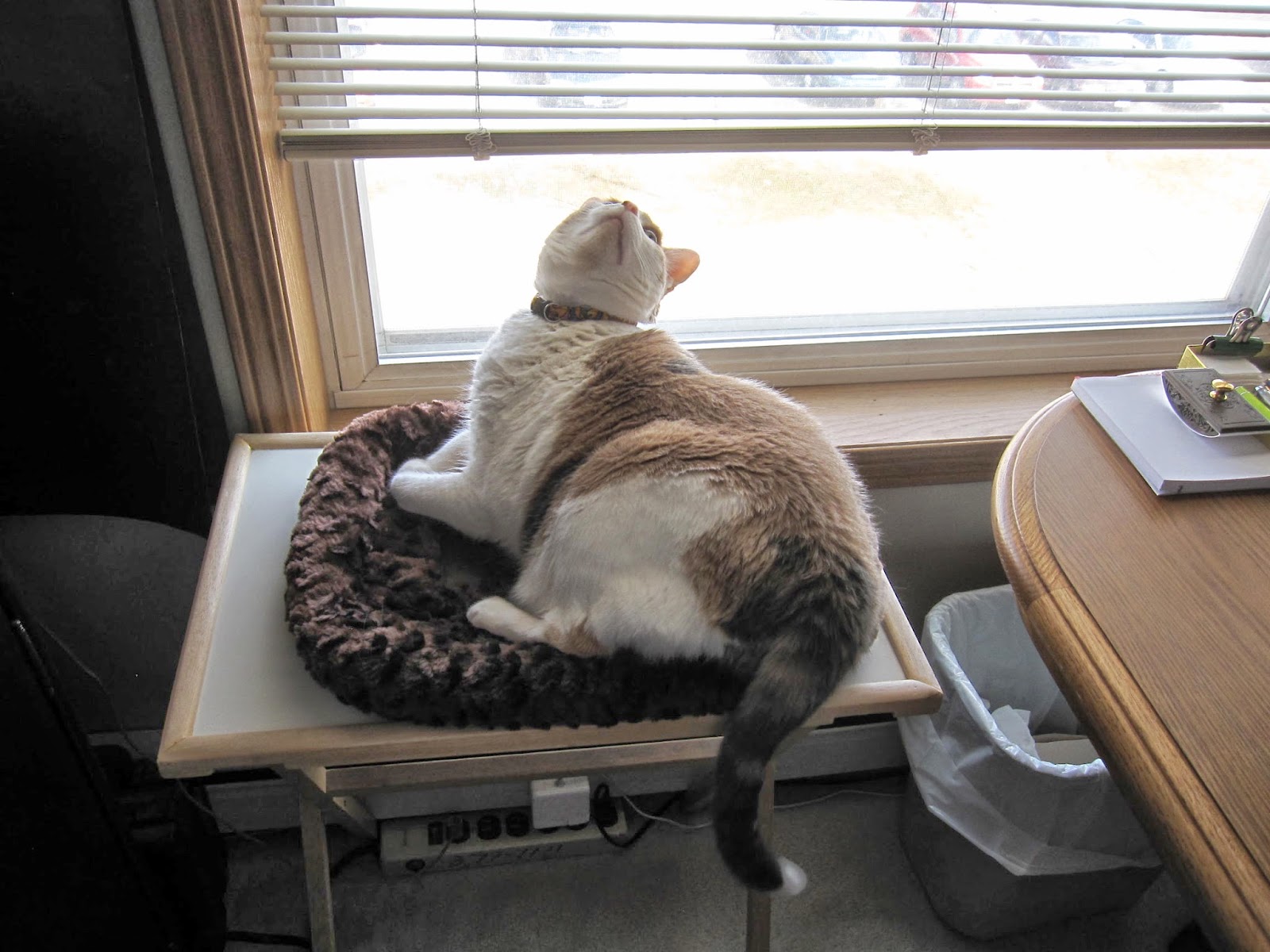 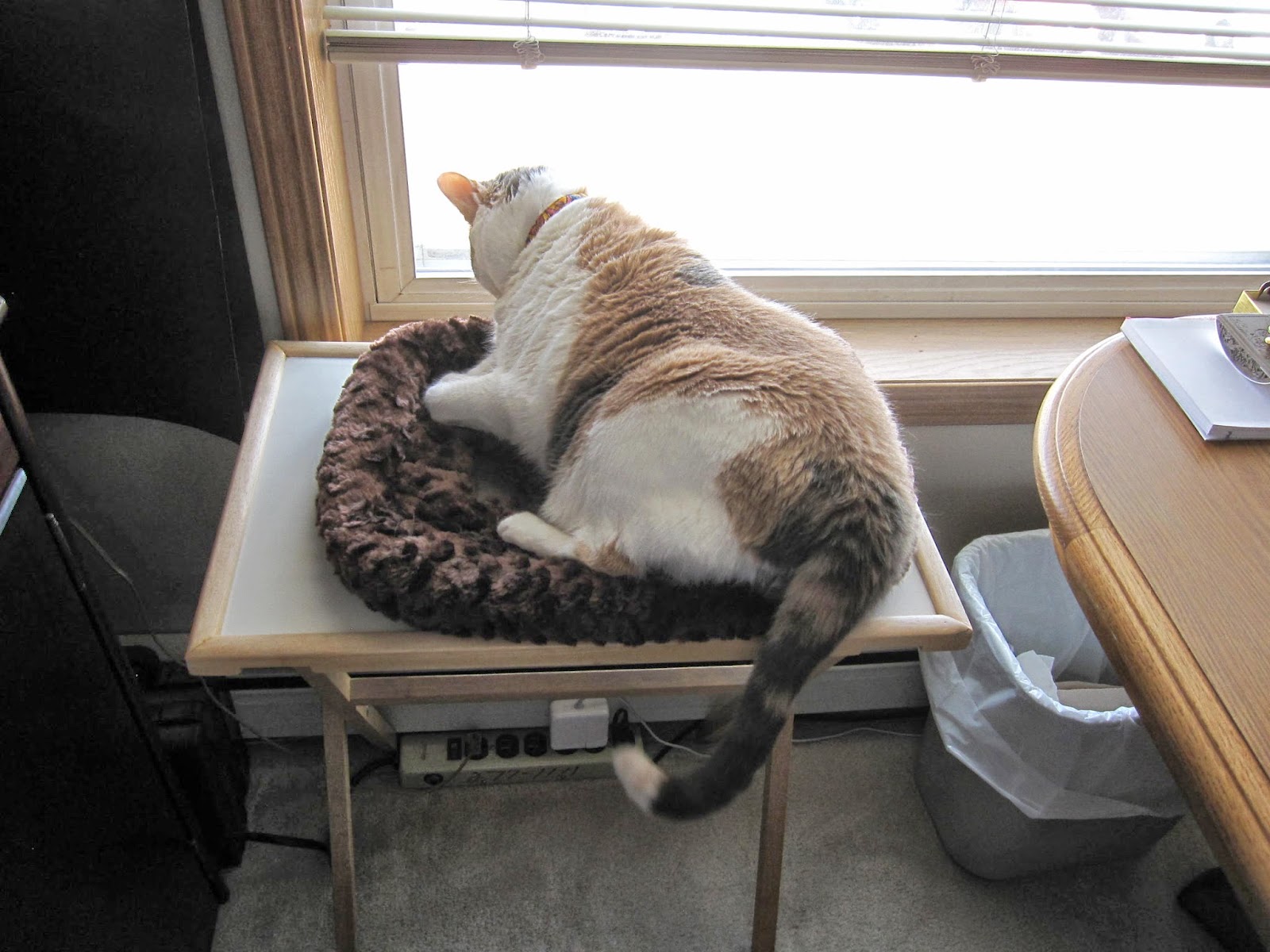 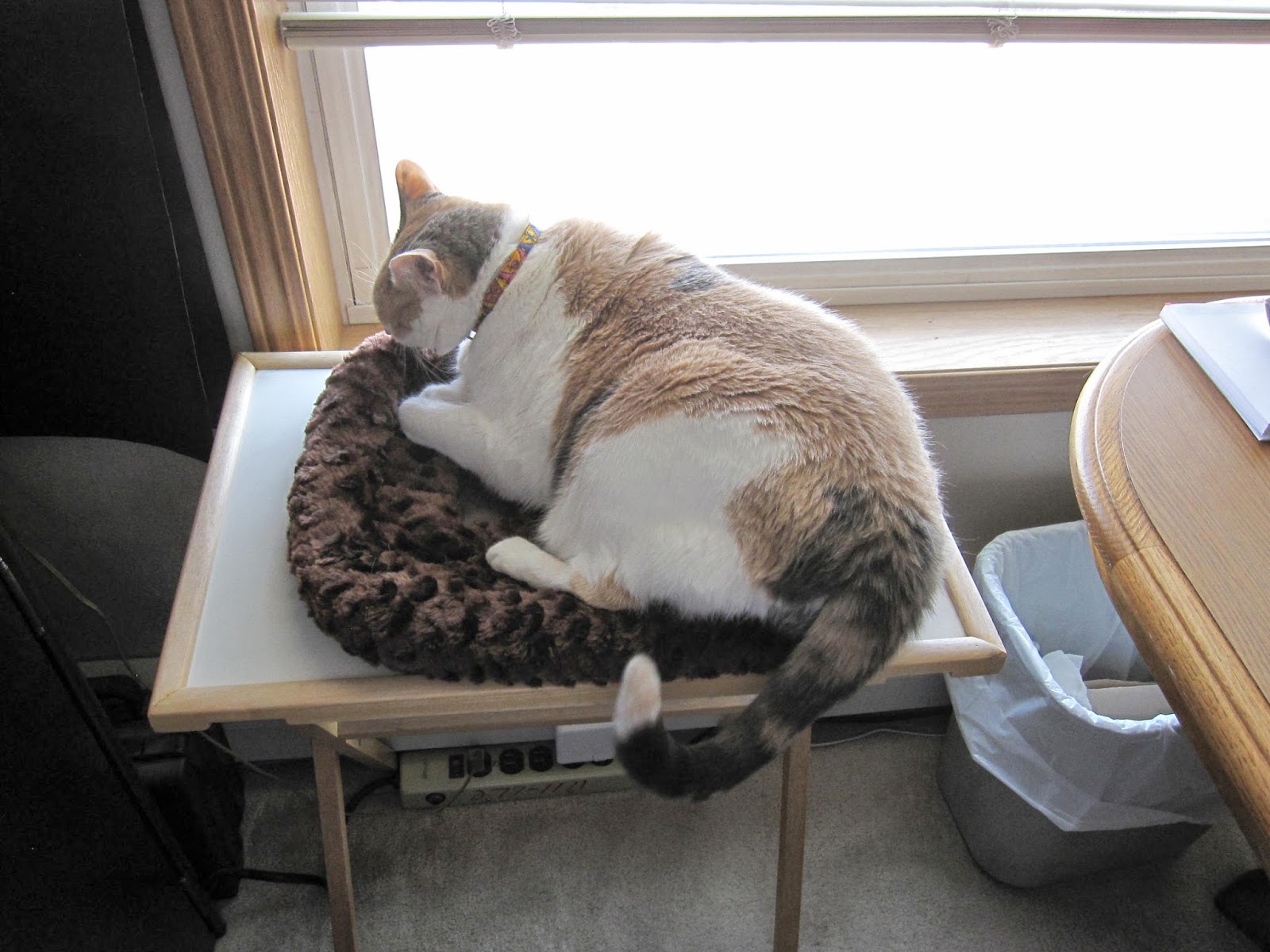 She finally accepted it, though. 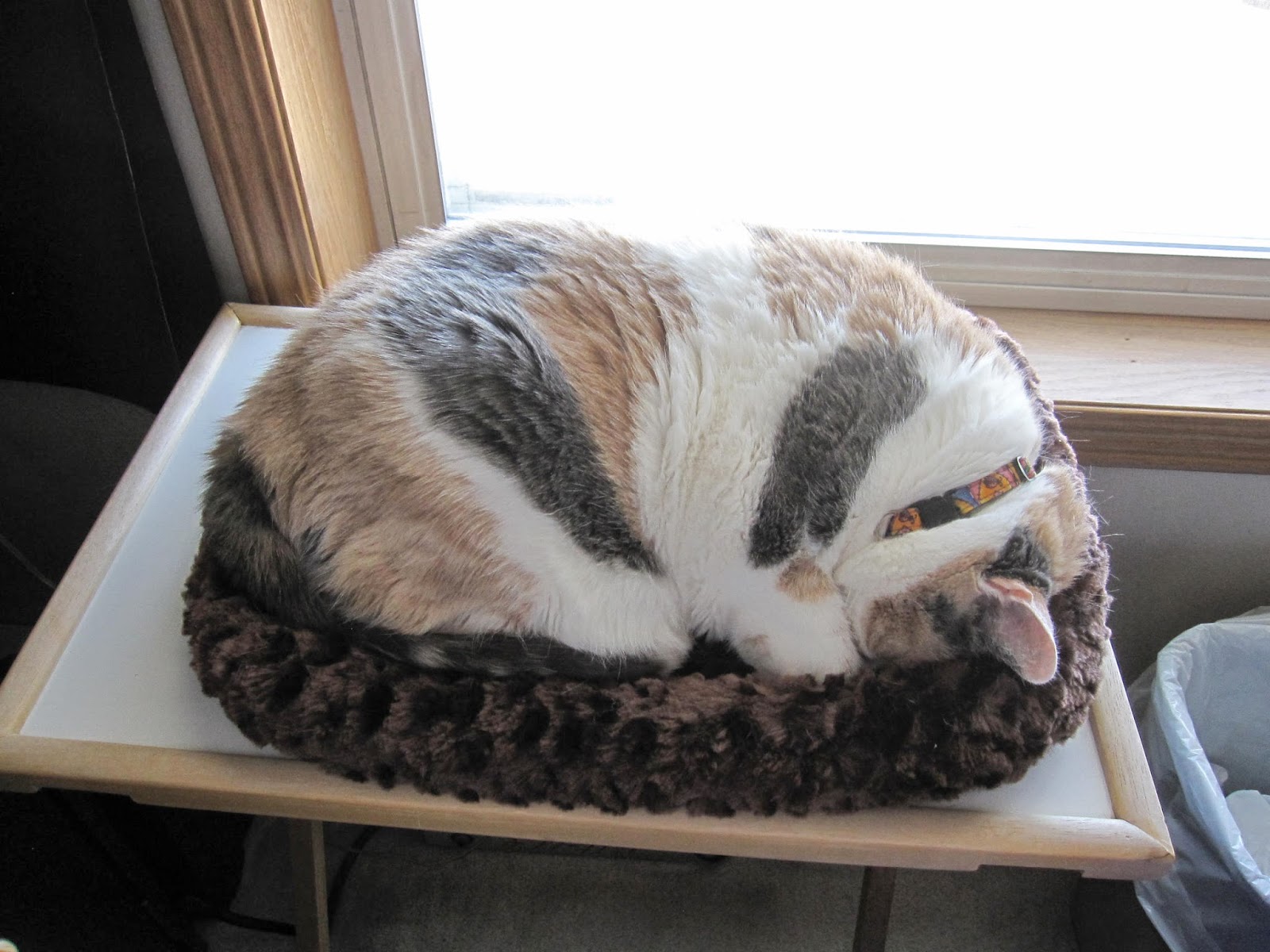 Will take her a while to push and shove it until it is as stretched out at the sides like her old one.
****
On Wednesday Dagan and Leah woke up to two dead cars.  They hadn't used the Galant for a few months because they've been car-pooling to work in the Prius.  They got them jumped and charged by a friend of Leah's and had the Prius checked out at the dealership--said it was fine and just a fluke?  Been running fine since then.  How odd, eh?
****
Anyways, they didn't make it over on Wednesday because they were doing the car jumping stuff after work.  They'll come over this next Wednesday and Leah and I will work on cards.
****
My second library volunteer, Amy, never responded to my emails, so I finally emailed Pam, the head of the outreach program because my books were due.  Amy's work had gotten so busy that she is now gone, too.  So Pam came over Wednesday with books! 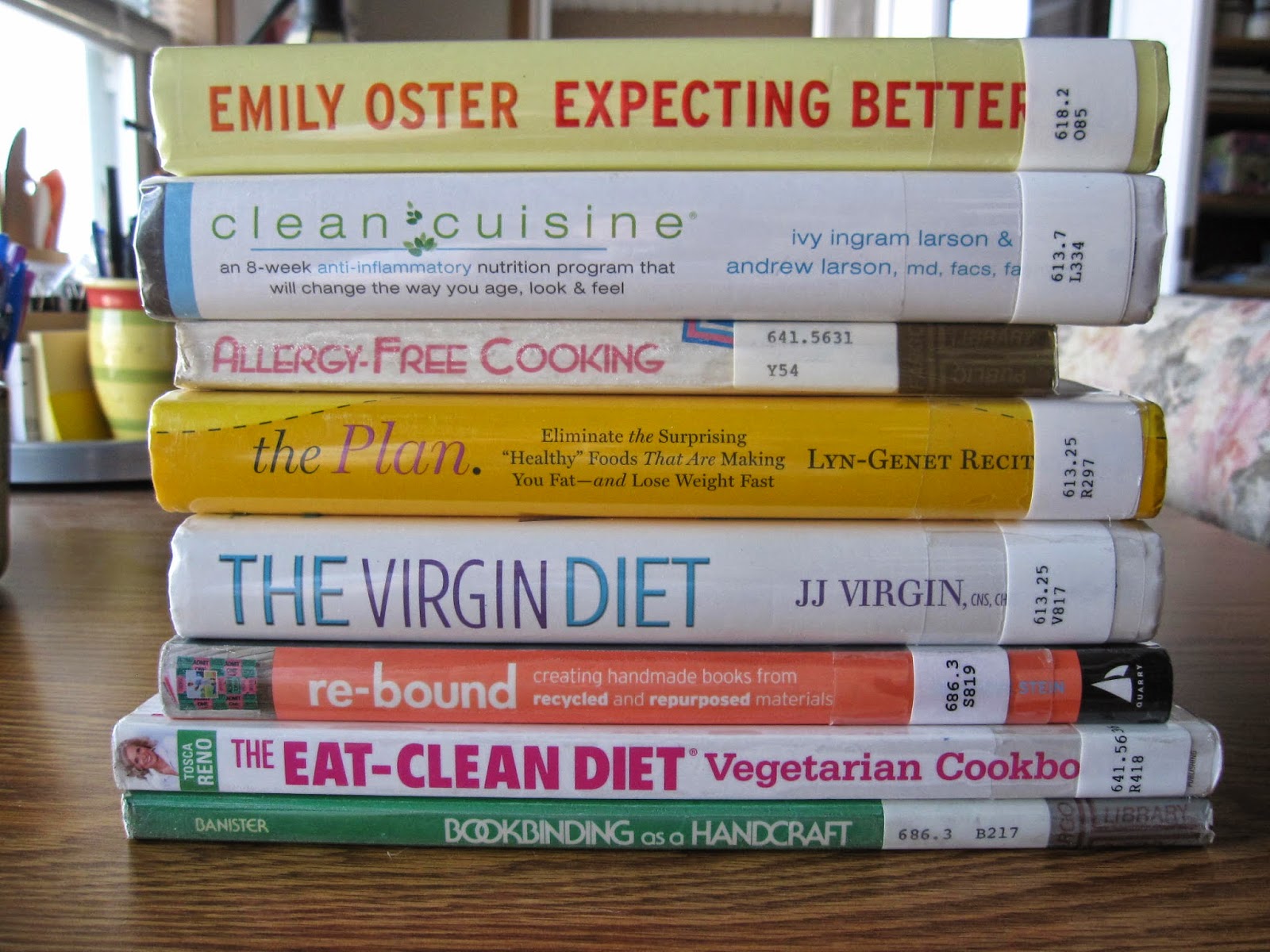 A couple on bookbinding, one on childbirth (I figured I'd check out what is new these days since it's been over 39 years for me), and the rest on the new diet (similar diets) books and cookbooks.  Nice!!
****
We had such a pretty day yesterday... 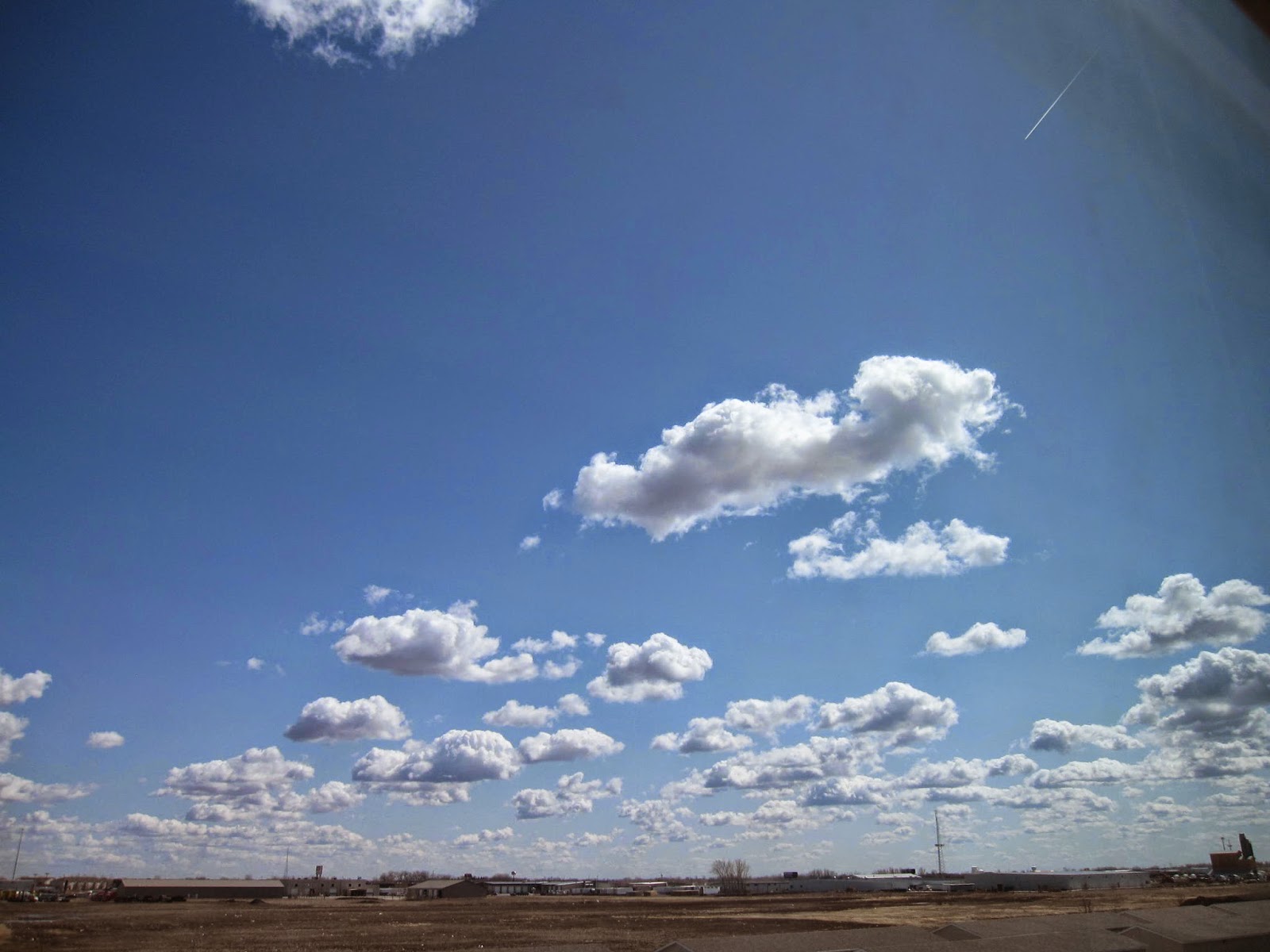 ...with the little white clouds drifting along across the blue sky... 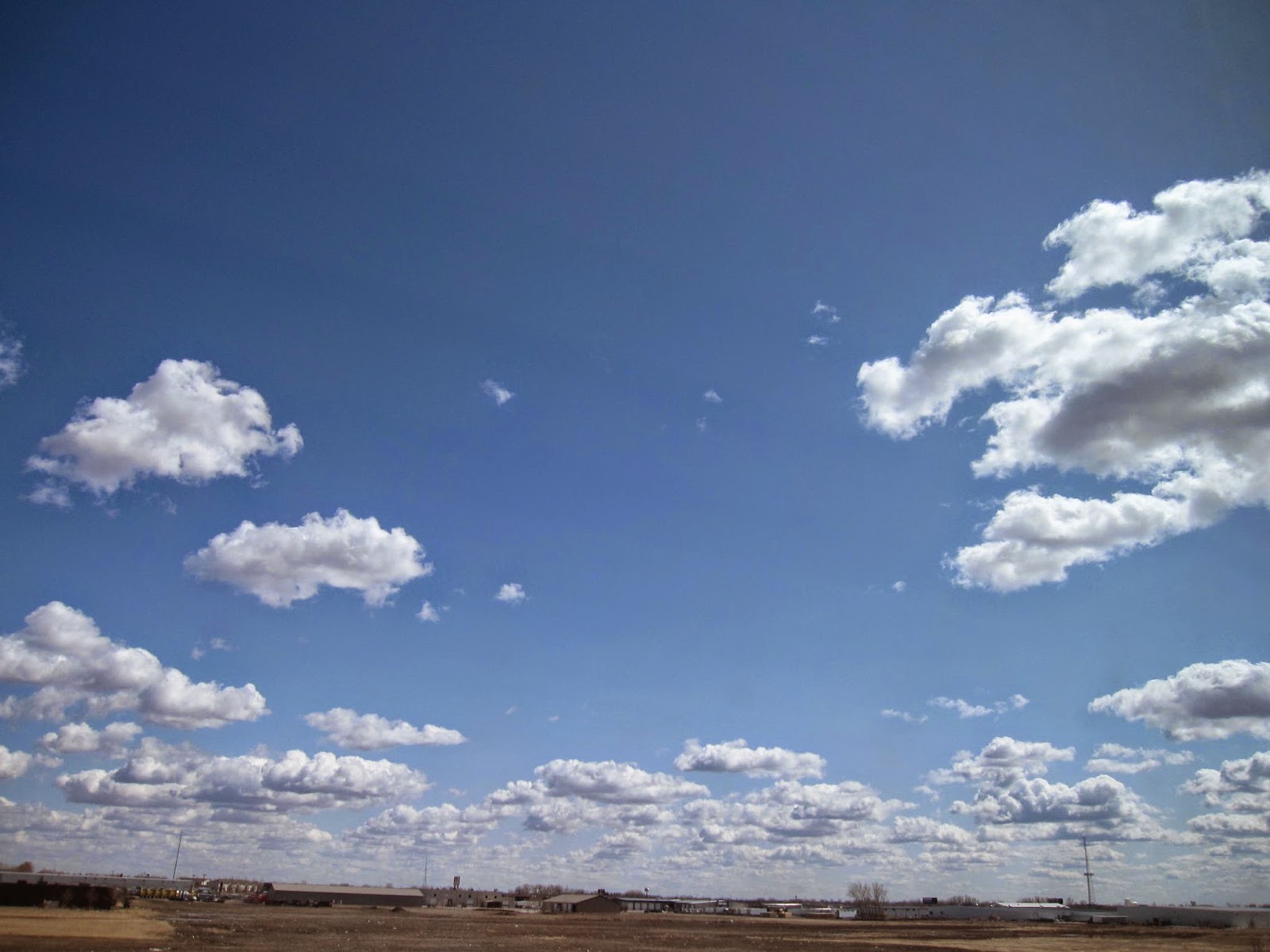 ...that I had to take a few pictures over the afternoon. 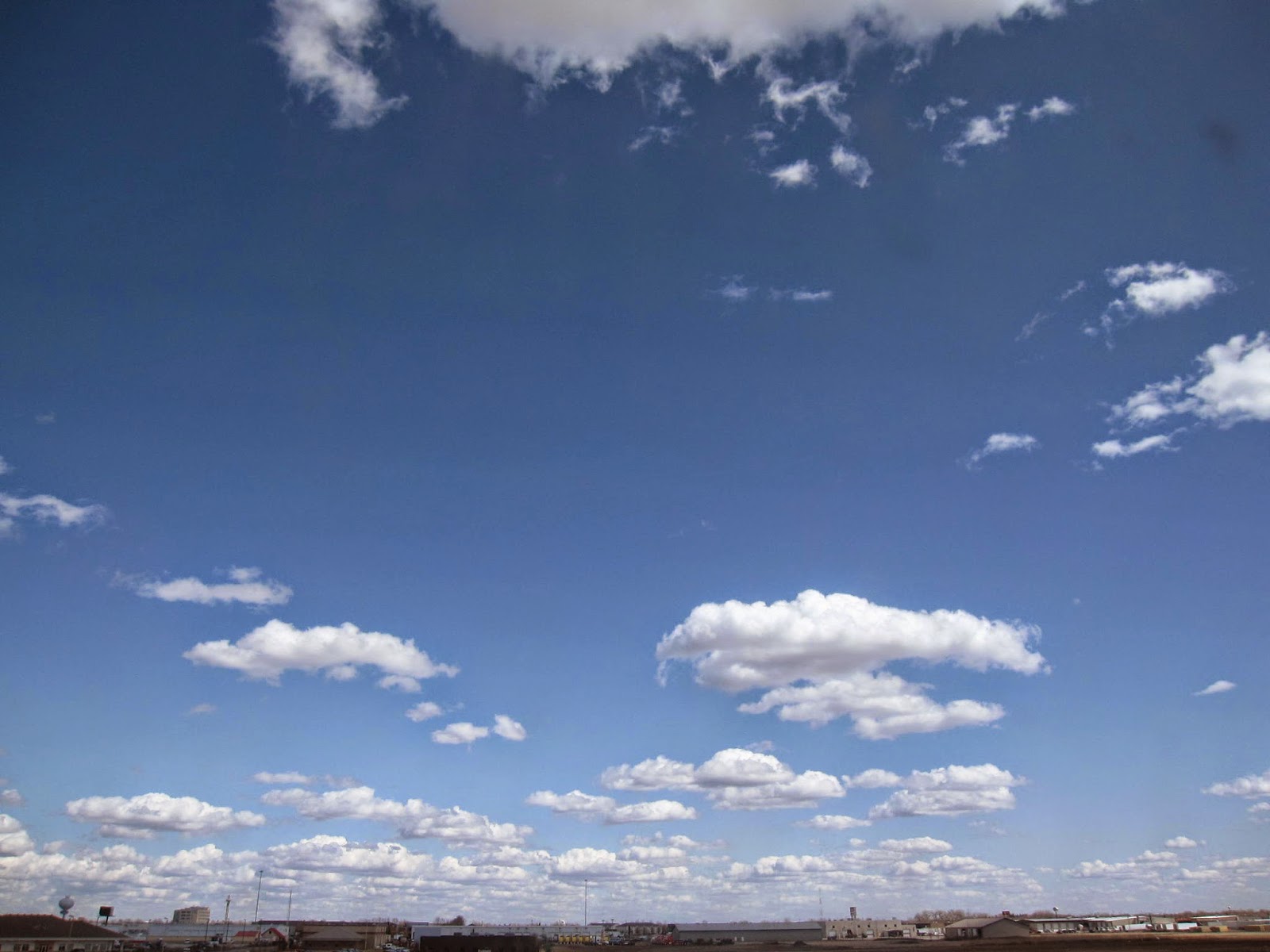 Leah picked me up after work and we went to their house so she could grab some dinner before we went shopping.  Then we headed out to Tochi's and left Dagan at home to wash clothes and do dishes.  ;)
****
[I have to say that it just totally warms this mother's heart to see Dagan being more helpful and protective of Leah.  :) :)  I think he's going to make a wonderful daddy.]
****
Anyways, on we went to Tochi's!  I do so love this little shop.  That scent of the 60s wafts up into your being as you pass through the old wooden door and the floor creaks lightly beneath your feet.  Ahhhh! 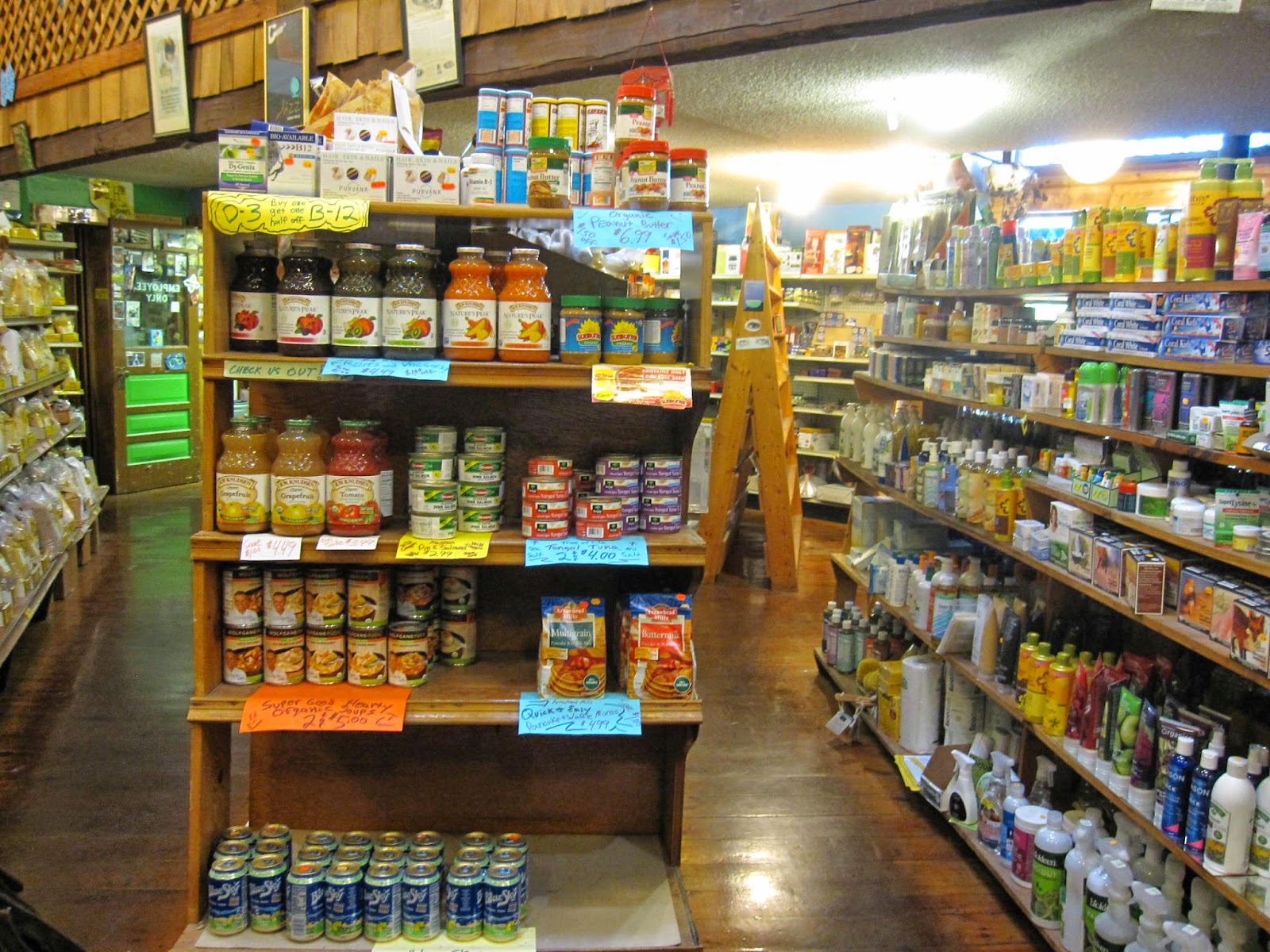 Those of you who've been around for a while have visited Tochi's with me before.  Look at all those jars of herbs and powders! 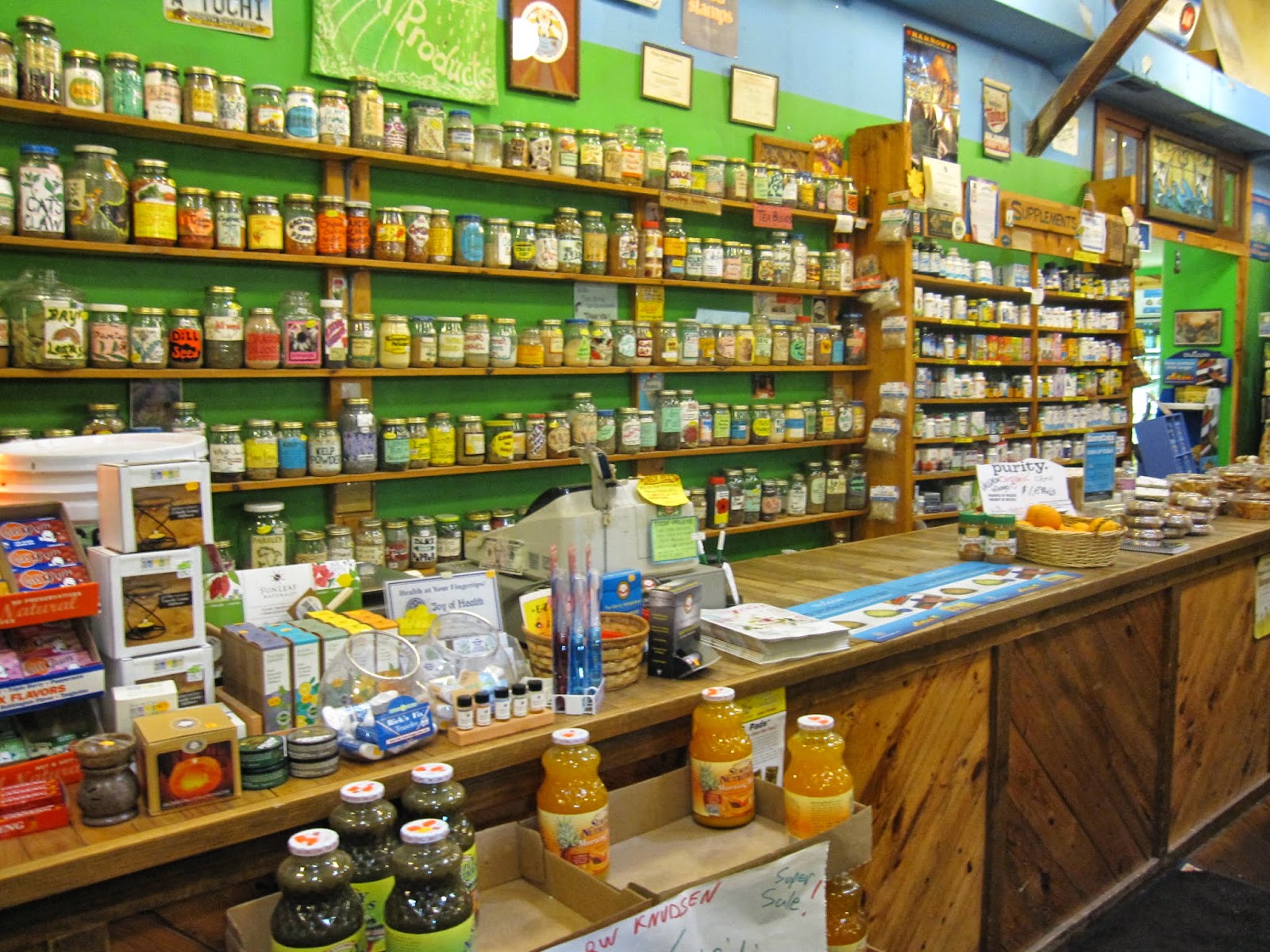 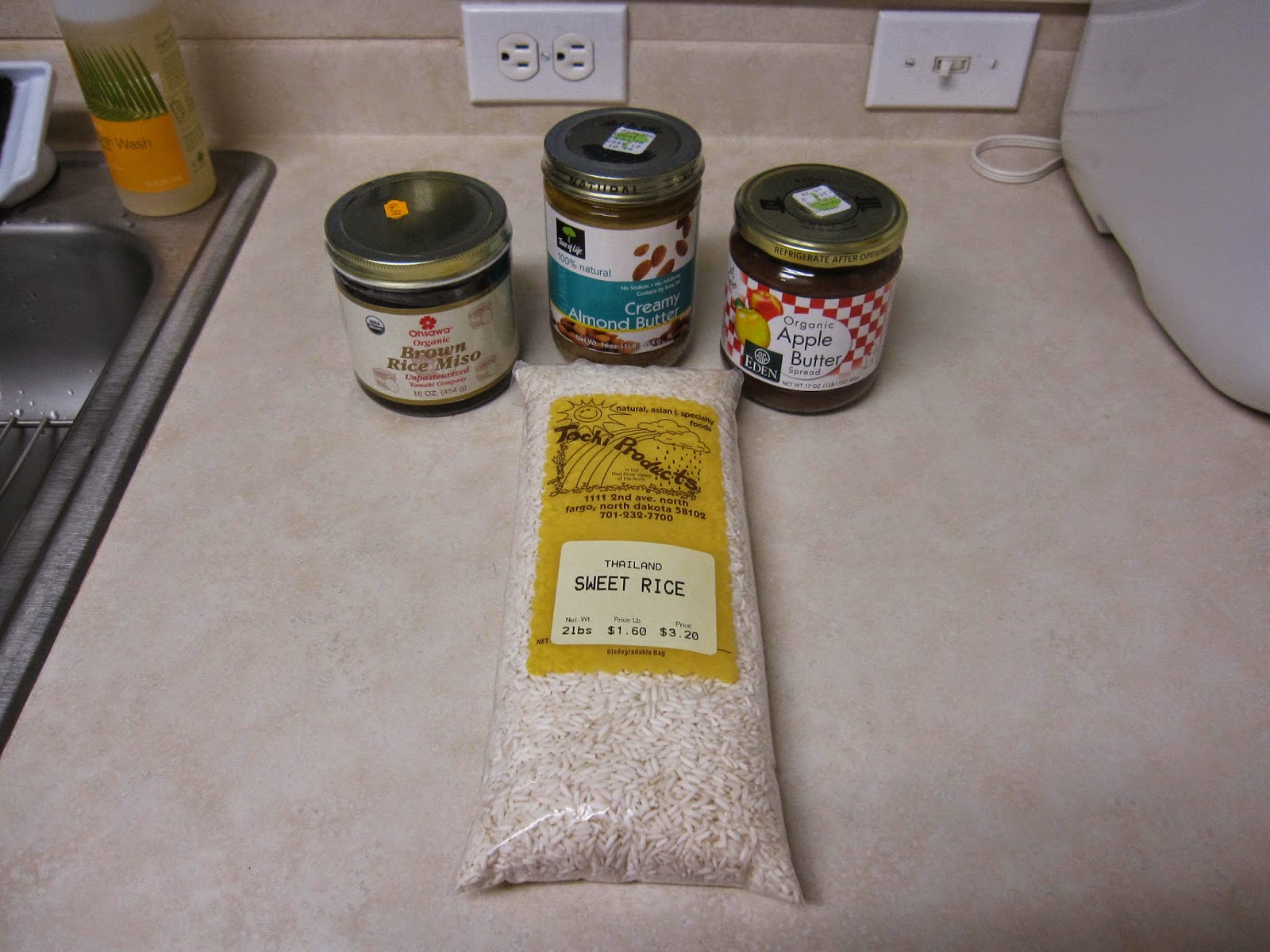 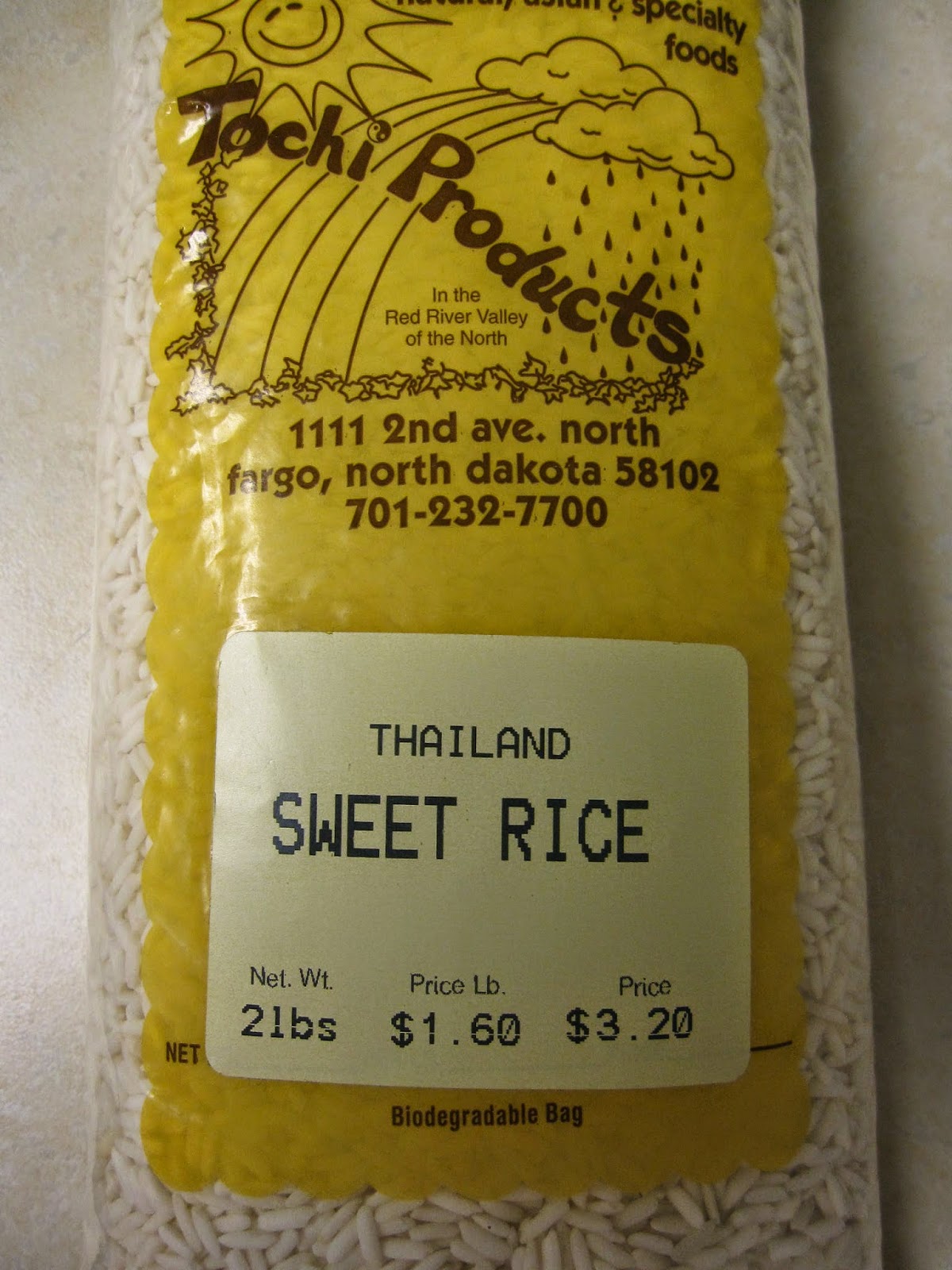 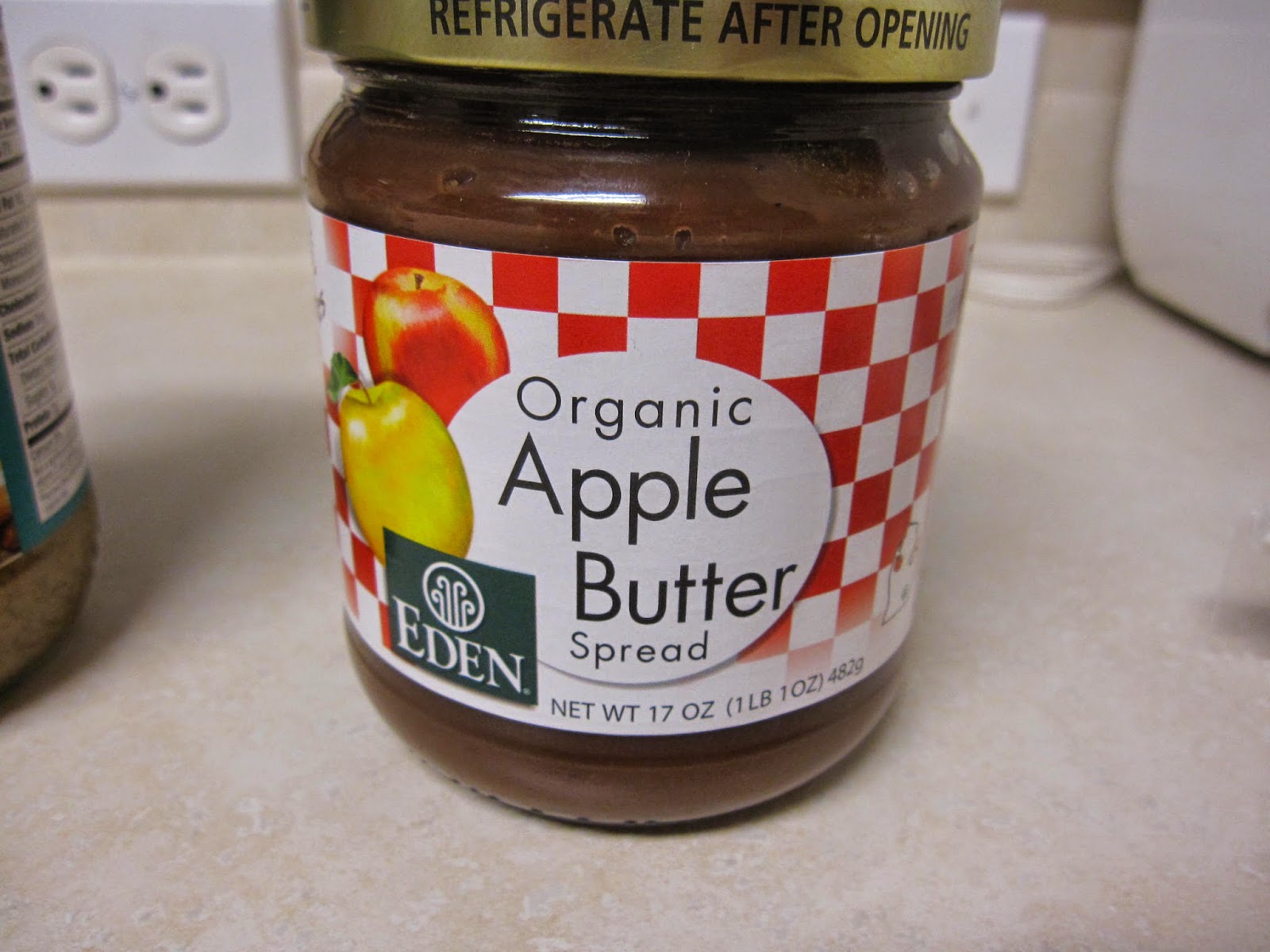 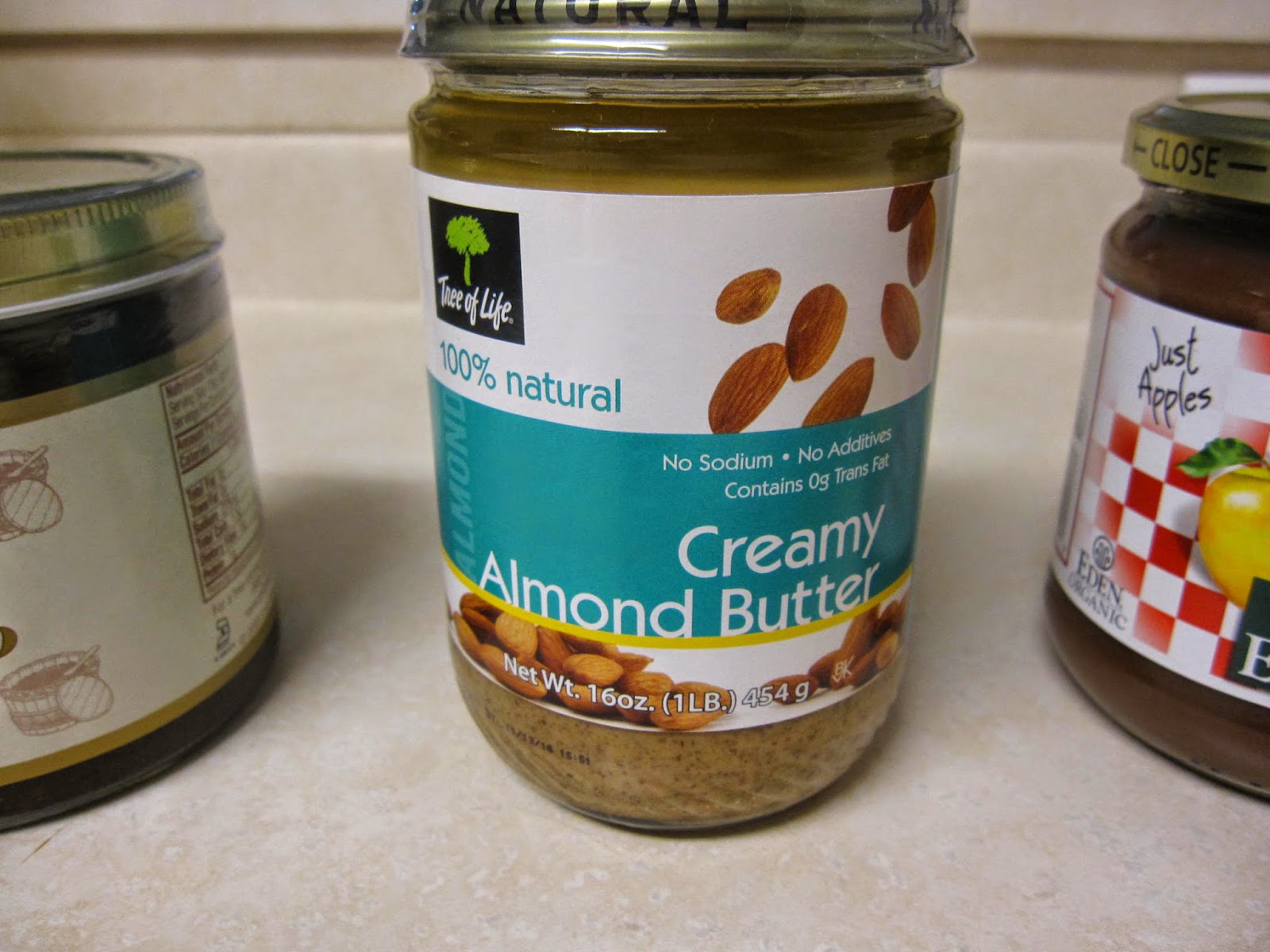 ...and some brown rice miso for soup. 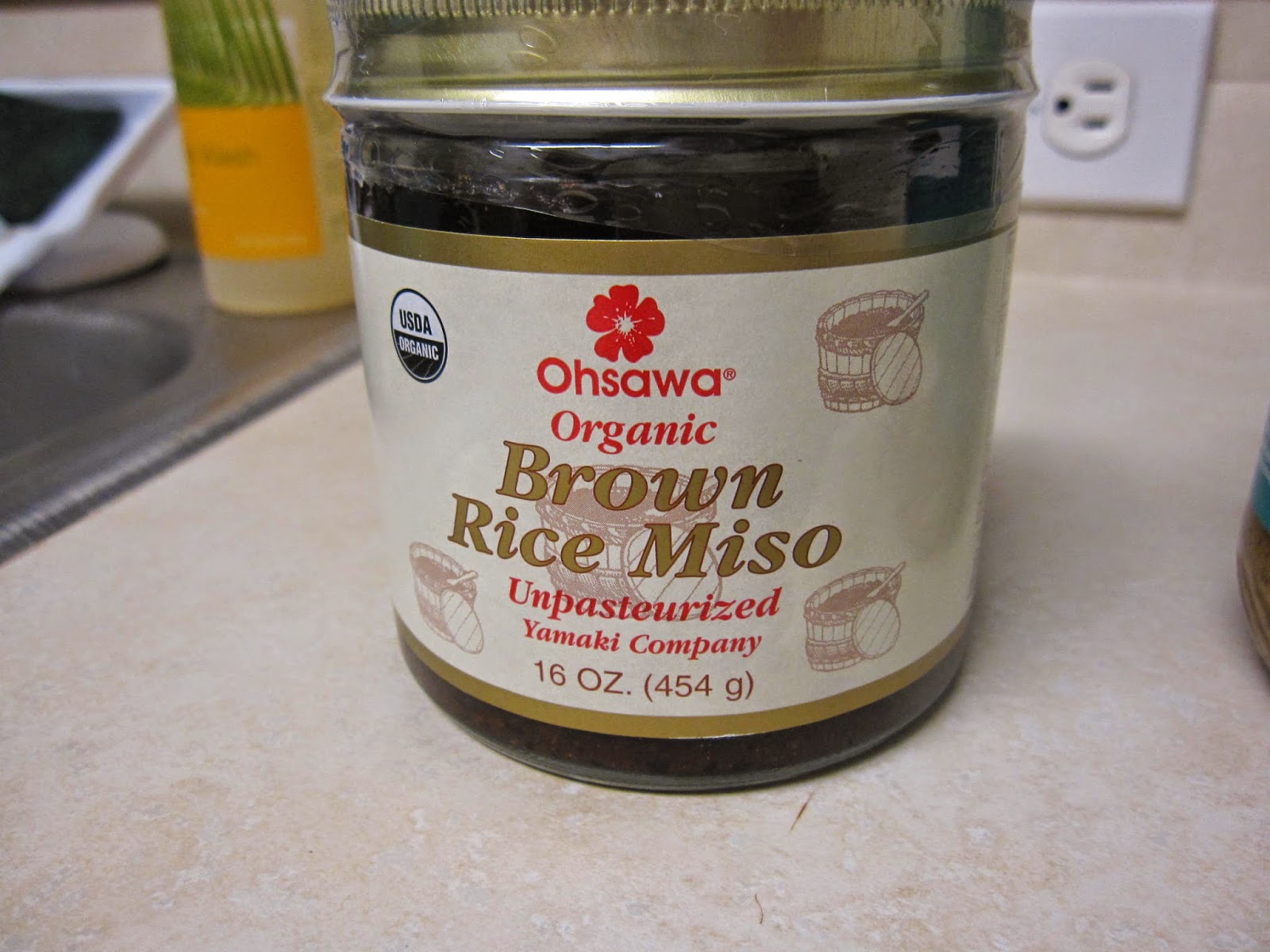 Then we headed off to Target.  (I confess, I cheated already and had a second coffee--a Starbucks mocha coffee--while we wandered around shopping for an hour.)  Most of what I purchased were the practical things like trash bags, toilet paper, and PUR water filters.  Got Miss Karma some cat foods and myself some Carmex lip balms...but I did get some things I didn't need.  ;)  After all, it was birthday money, right?  (Which Dagan and Leah added to, too!)
****
You know me and my one left pinky nail I color...so how silly was this?  Nicole by OPI called "mer-maid for each other". 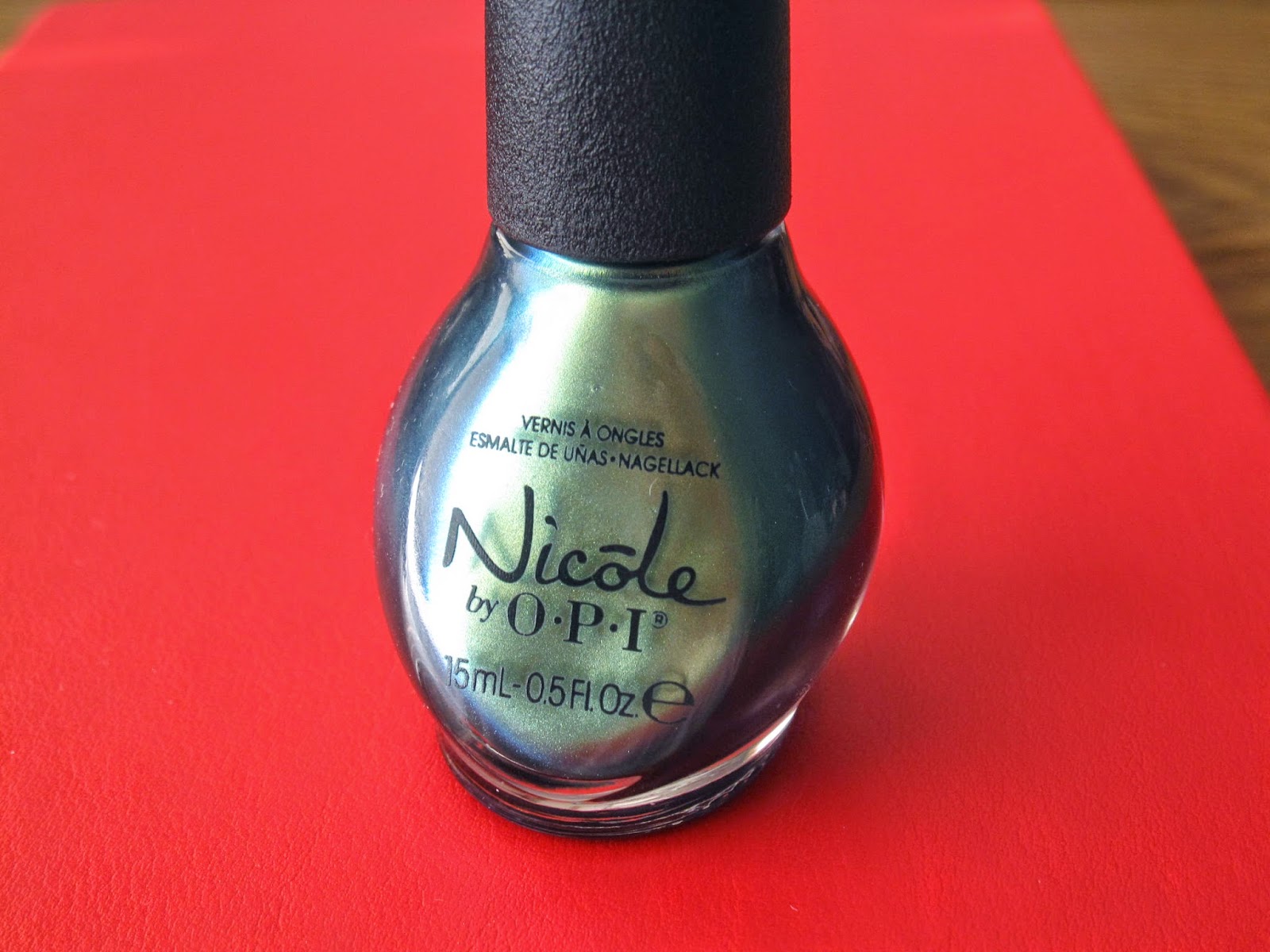 I could not get a picture that showed the real color...which is a beautiful bluish green peacock color with a hint of gold.  Even Leah agreed it was pretty awesome.  How frivolous was that!  LOL! 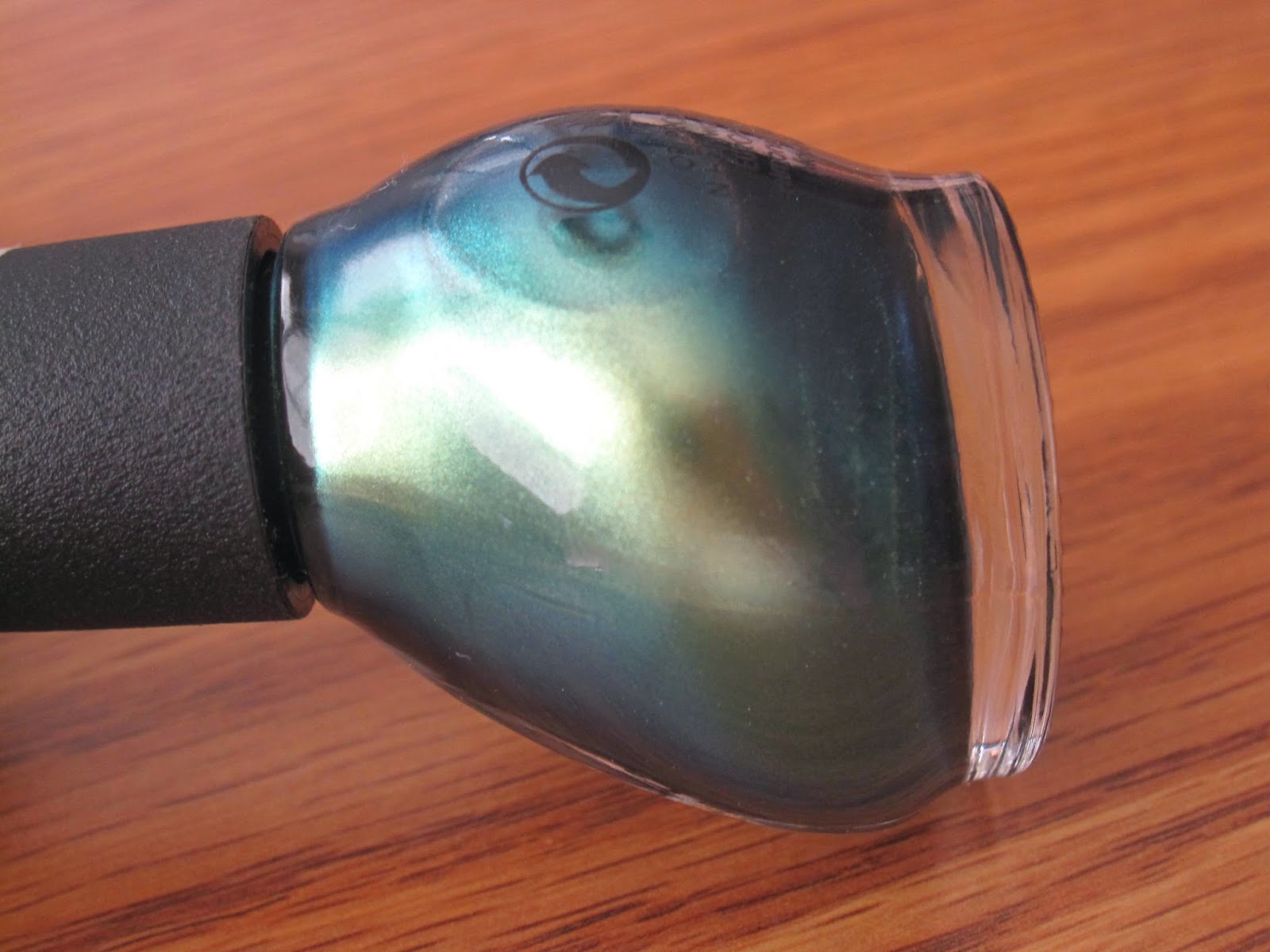 I little more practical...another set of Sharpie Pens.  These are so cool because they don't bleed through the paper.  I use them to address envelopes all the time so that it doesn't matter if the letters get wet or not and it won't bleed through the envelope.  (I used to have to put paper inside the envelope to catch the bleed-through if I used a regular fine Sharpie.)  I love my other basic set...and this one is a little more pastel-y, I guess. 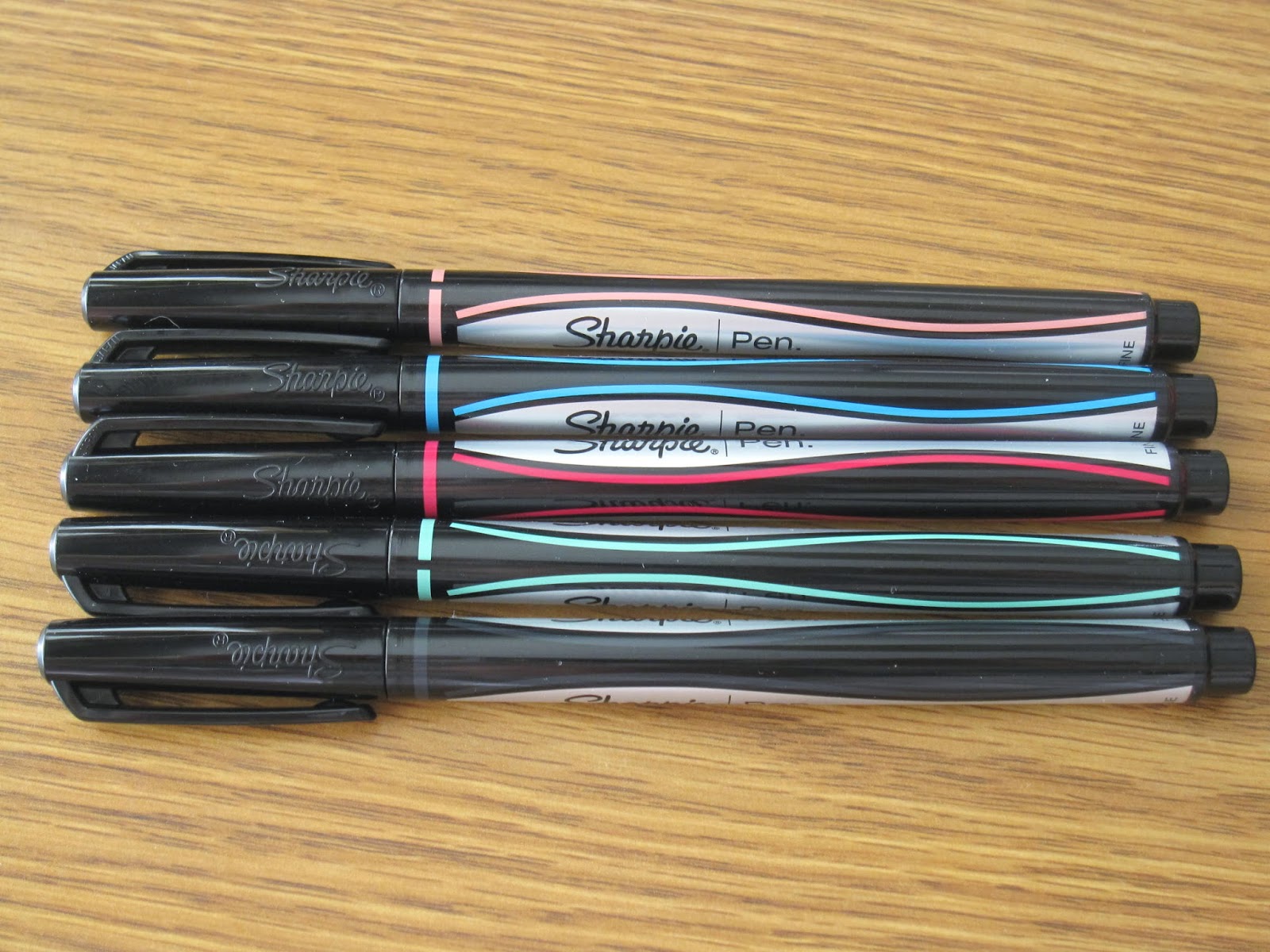 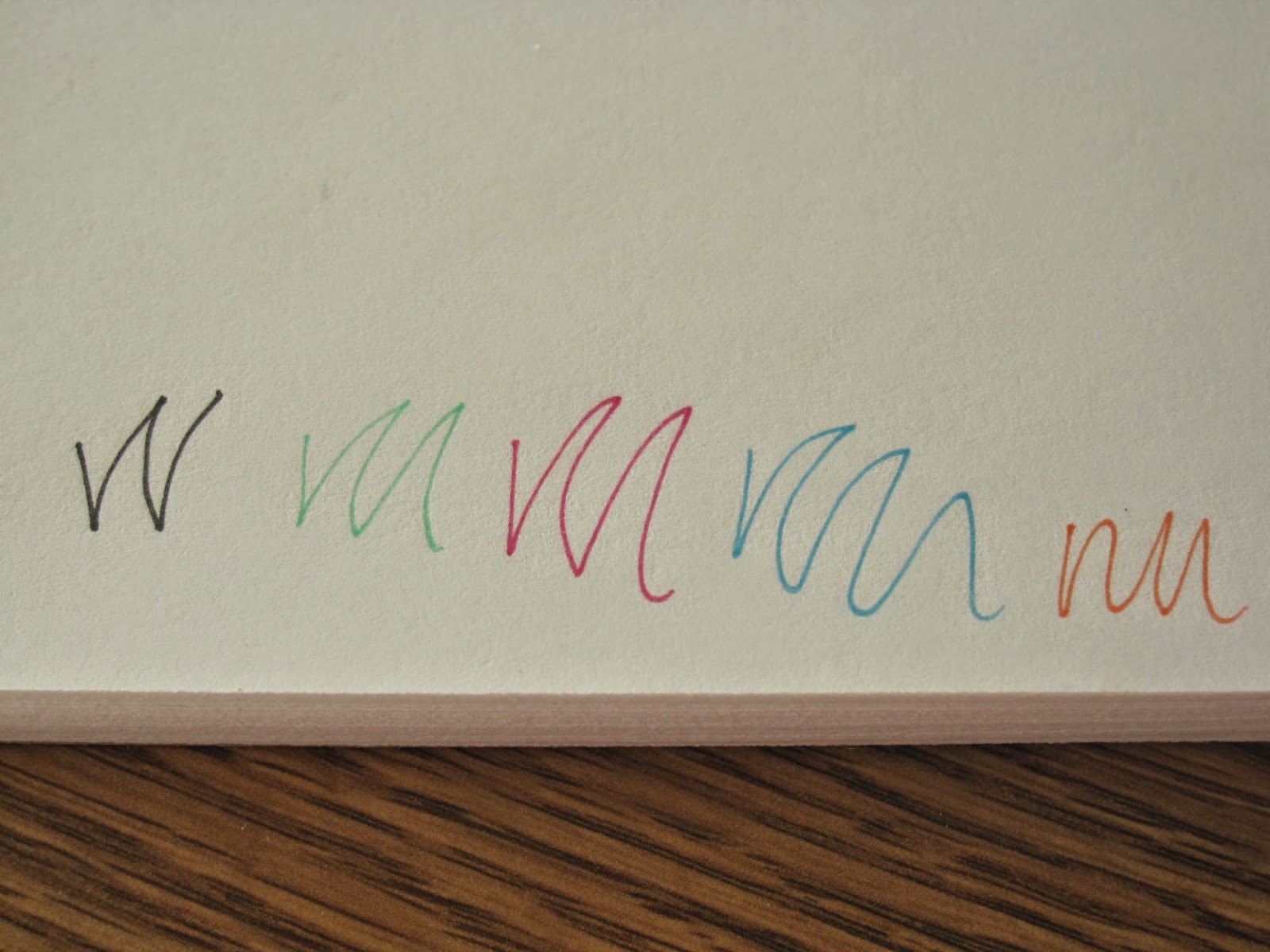 Of course it was the turquoise that won me over.  All I actually had on my list was to get another black one.  ;)  (Both Leah and I wish you could just buy blue ones by themselves.)
****
Then...I have been snooping for a couple months online for something to have behind me at my craft table that would hold more of my letter writing stuff.  I never have enough room.  I knew it was going to cover a part of the air conditioner if I went up with shelves of some kind...and the wooden ones I found were so expensive...and buying another of my wooden Rolodex letter trays (the one that is on the top is the one I had) and the holders to connect them together--well, people said they weren't sturdy and fell over if you bumped them...and I am always bumping things behind me there... 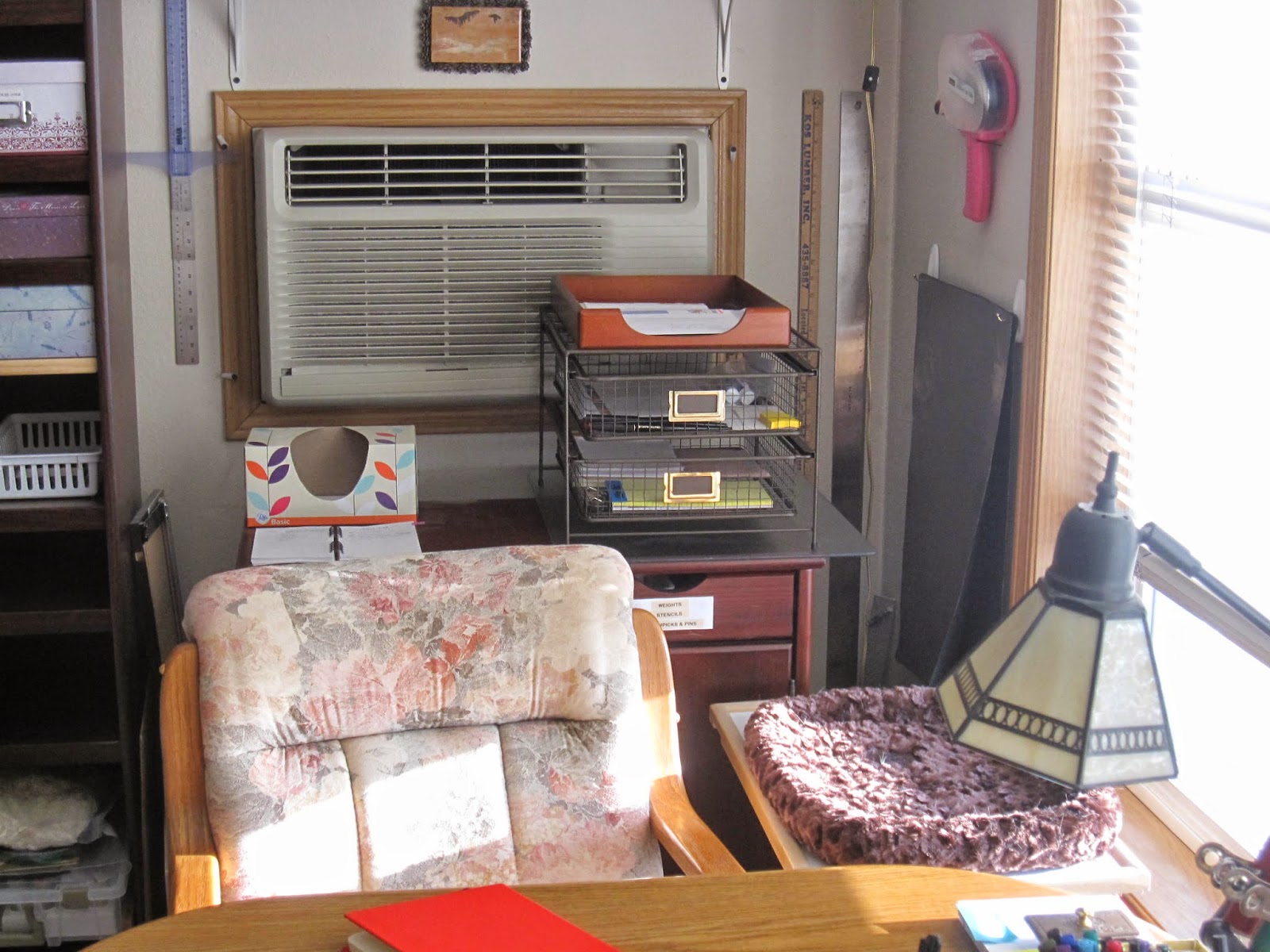 ...and then I happened to spot this at Target!  Only one there.  The drawers slide in and out so easily.  My old tray could sit on top.  The air can flow right through it.  But it was too deep.  (Leah and I both carry tape measures.)  That cabinet is pretty narrow.  But then I thought...I must have something at home I could put underneath it, right?  I'd make it fit, right?  Where there's a will...  LOL! 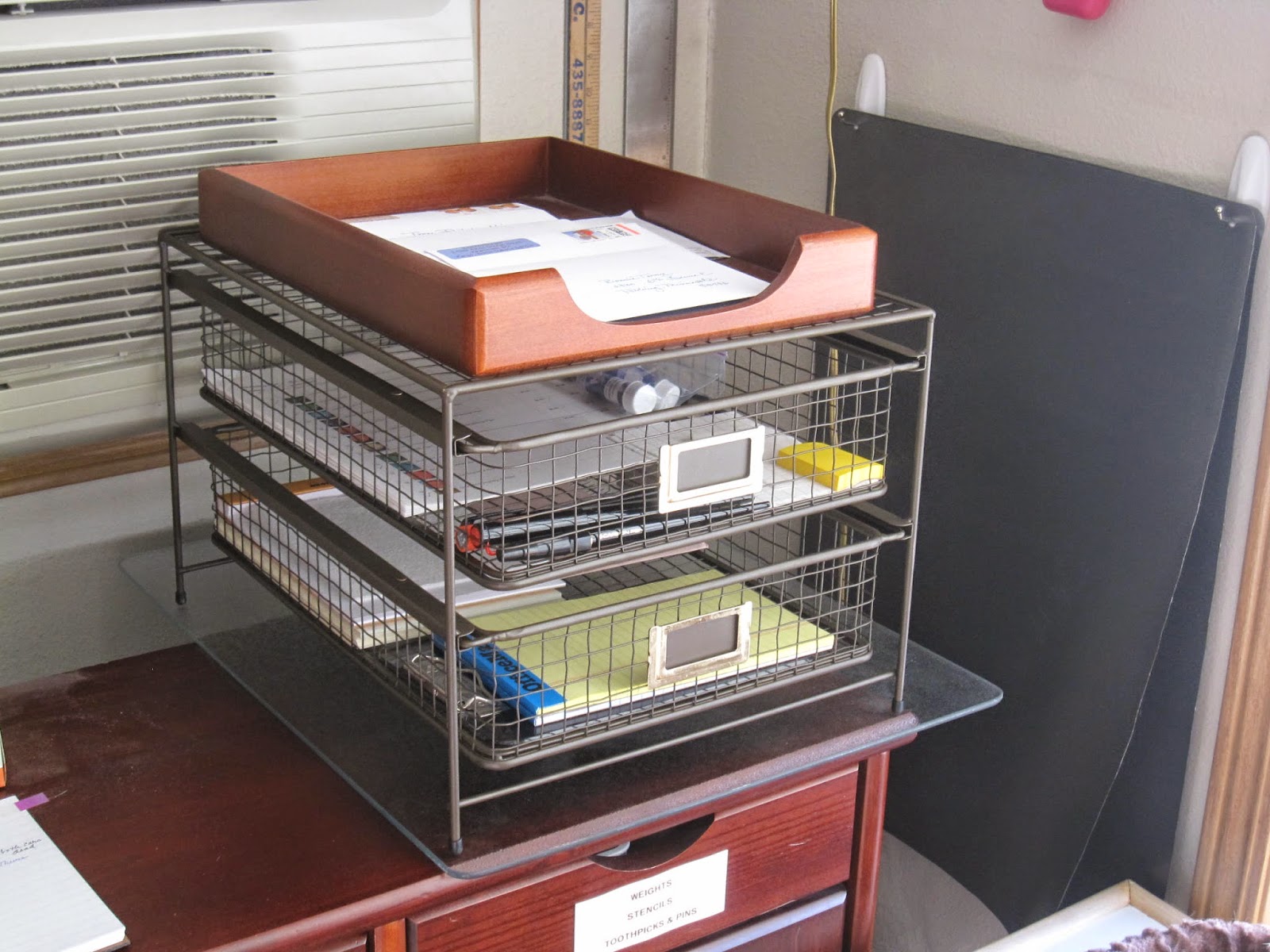 When I got home I found this big old glass cutting board that I actually bought to use on the slightly squishy folding tables I have had for years for art and craft backup.  (There are a lot of projects where you need a hard surface to do them properly.)  I pulled the cabinet out a bit and set it up--tada!  And the whole set-up slides forward easily so I can reach the knobs on the AC no problem. 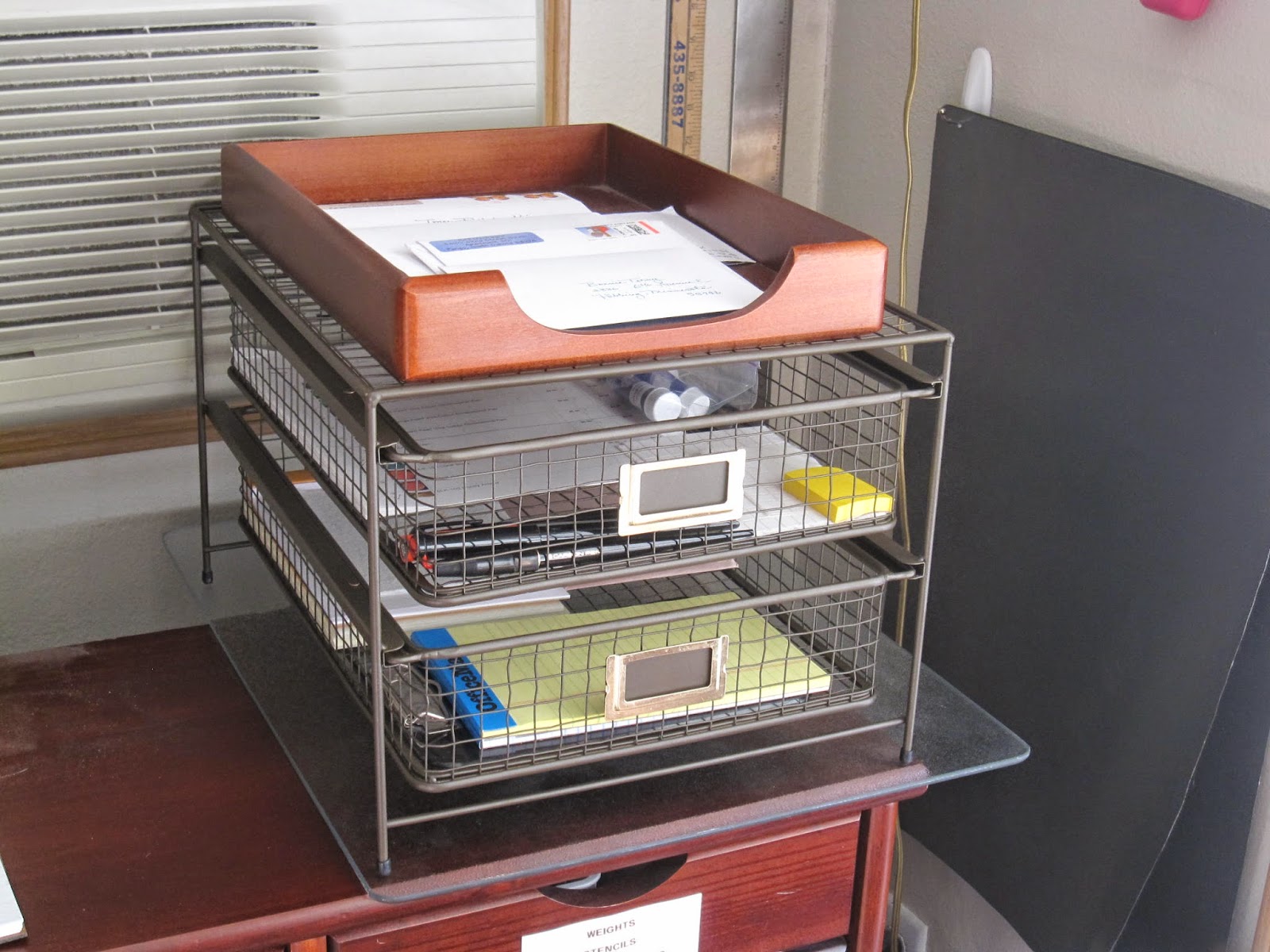 I also took out one of the table leaves so there's more room--since I pulled the cabinet forward.  (I figured I had best do all that right away when I got home last night because I knew once I sat down I'd hardly be able to get up again--LOL!)
****
Last but not least...found another, even cheaper, gray mat-bed for Miss Karma.  She was already snoozing in it last night... 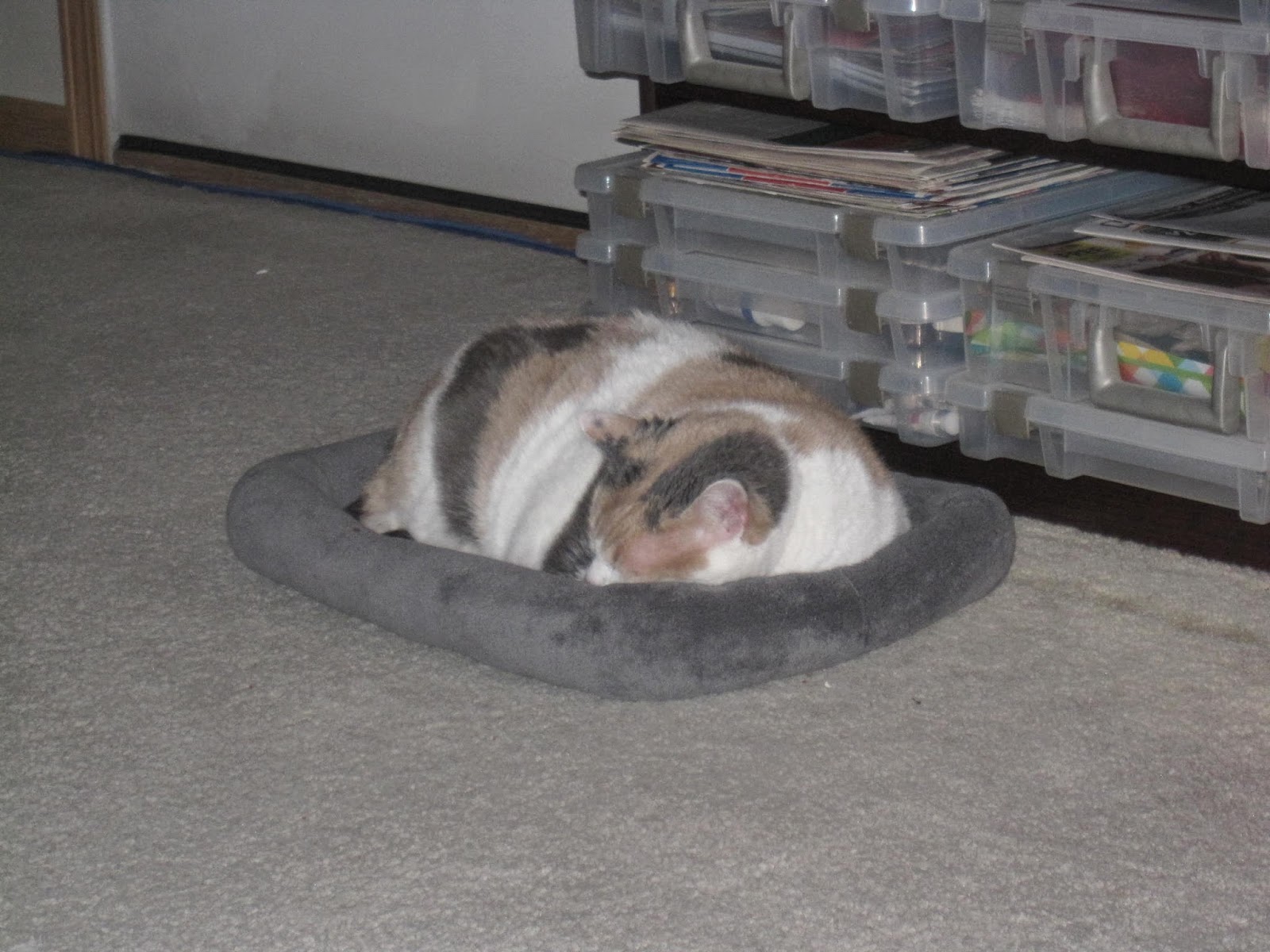 ...and claiming it as her own this morning...like she was afraid I was going to take it away like her cardboard boxes or packing paper--LOL! 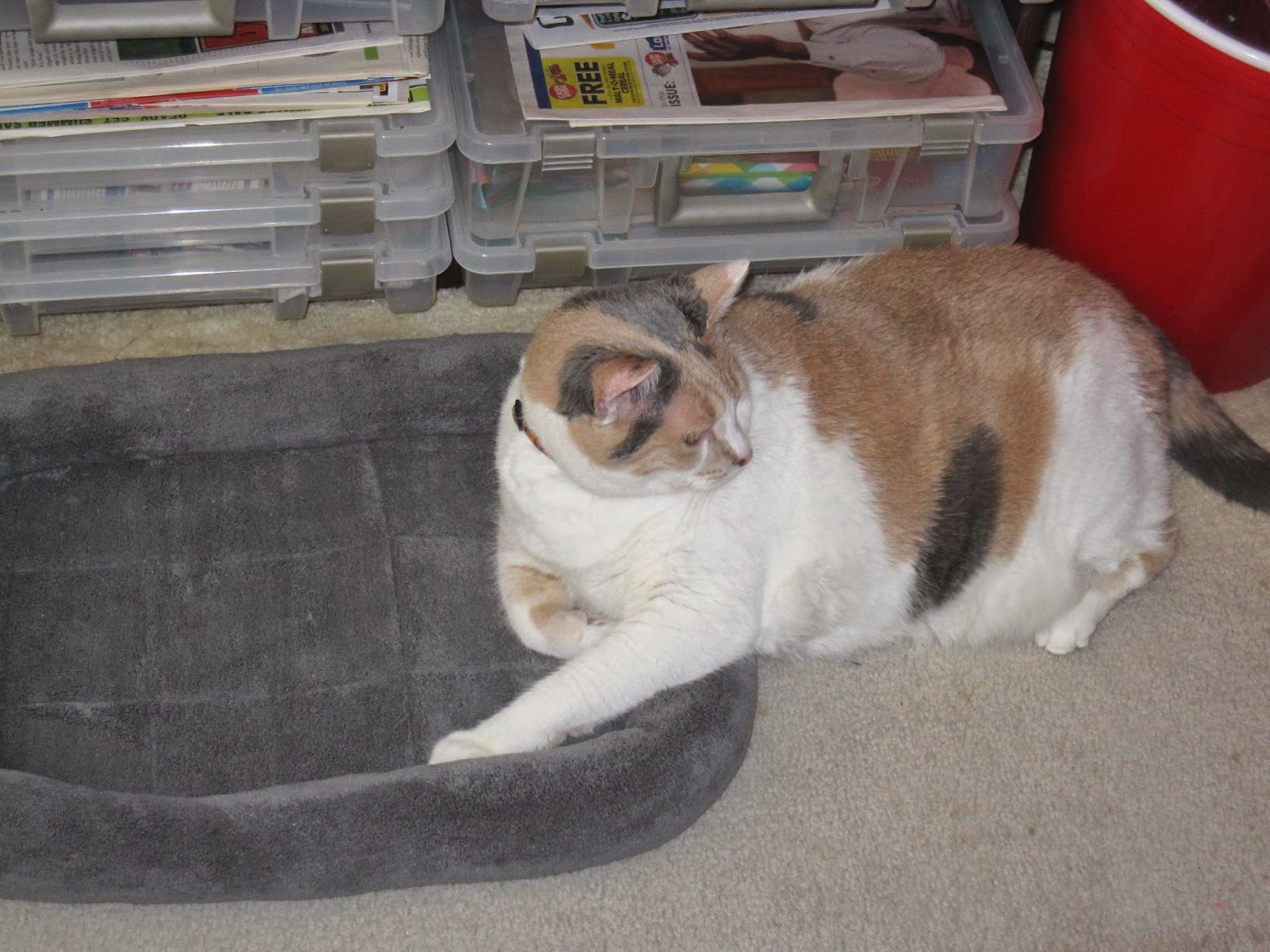 Can you tell I am feeling a lot of personal empathy for Karma because she has been so stiff-legged when she gets up?  I can totally relate to achey old bones.  Been increasing for Karma the last year or so. 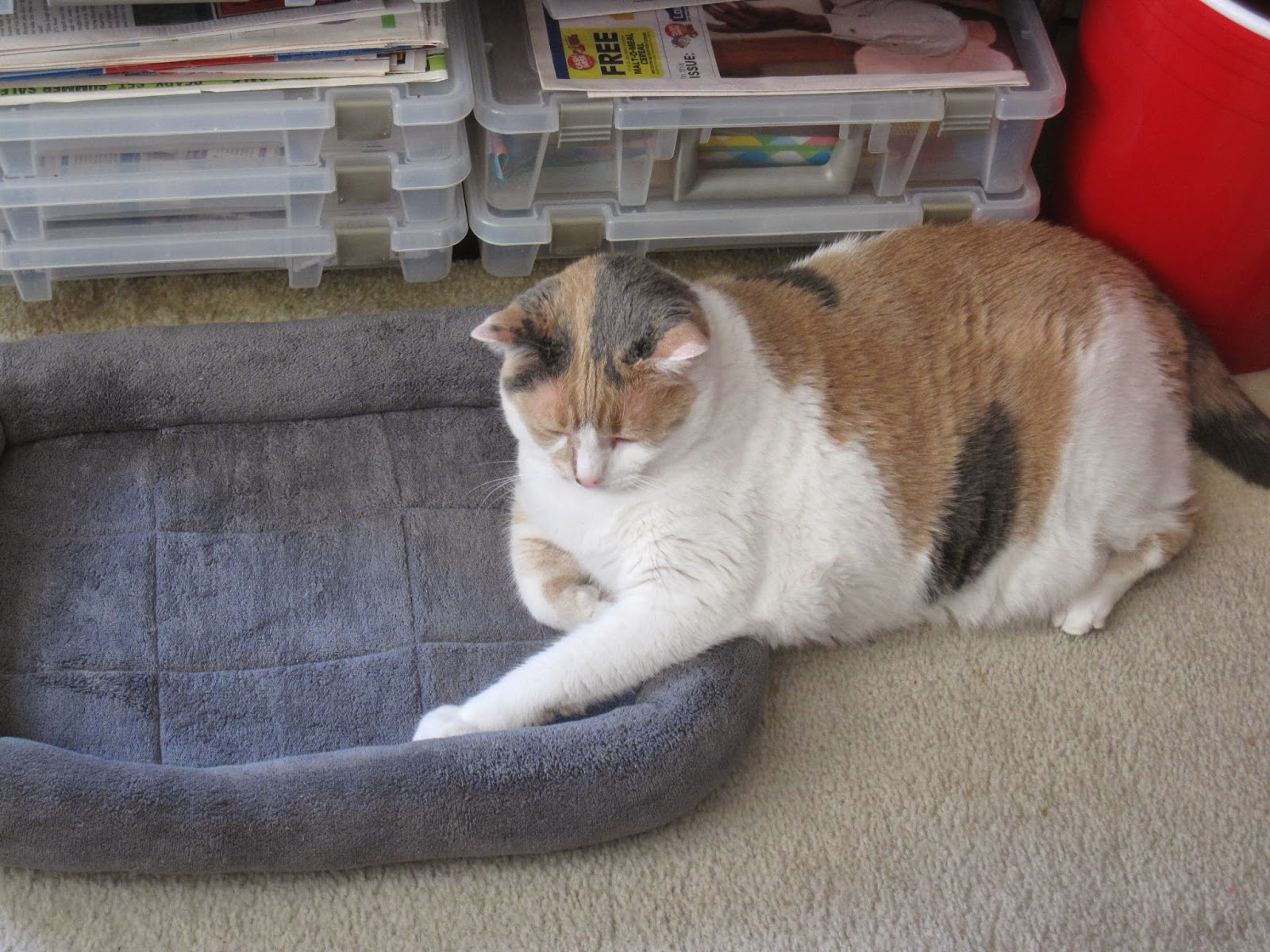 Speaking of...Karma's out on the porch right now soaking some sun into those old bones.  It's 47 degrees right now (8 C), but supposed to get up to 64 (18 C).  Going to be another beautiful spring day!  Oh, and won't be long until Leah will be all done working!  May 9th is her final day.  Then she will be a housewife and soon a stay-at-home mom!
****
Well, that's it for today.  Had such fun with Leah last night!  You're all caught up again.  And speaking of caught up...as long as I can barely move today...I just might finally get some blogs read today along with perusing my new library books.  I am too sore to even write letters, I think.  Well, we'll see.  Maybe just for a little while... I'll know after I do my daily journaling. ;)
****
Have a glorious day!
****
"A world without love would be no world."
Johann Wolfgang von Goethe
Posted by Rita at 10:45 AM