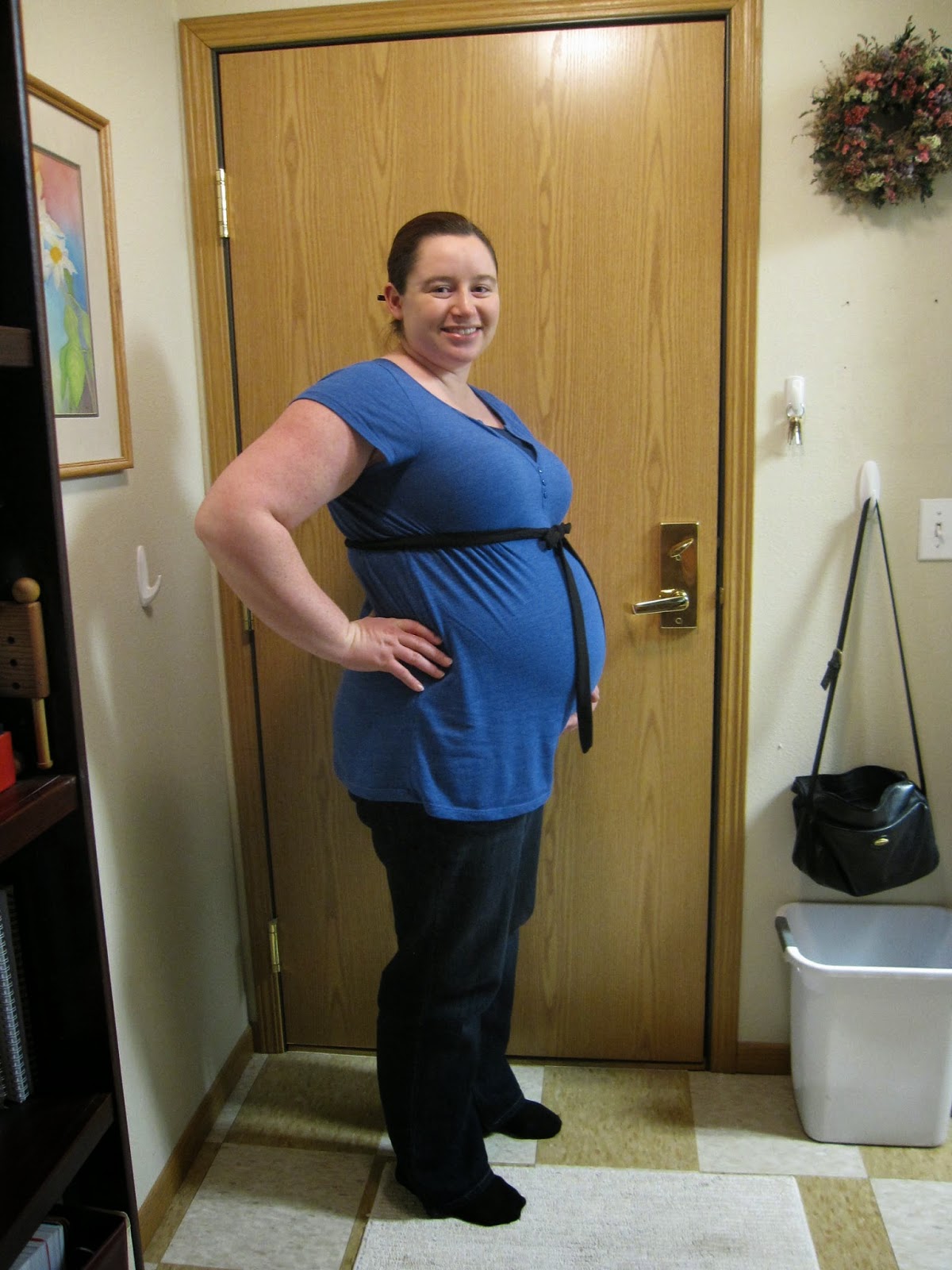 Dagan and Leah were here Wednesday.  I don't think I had seen Leah for five weeks!  We all still have the tail end of this head cold thing, but are all slowly feeling better.  It was technology night that night.  I suddenly couldn't log in to Cashwise on my TV computer, either, that day.  Grrr!  When Dagan cleared out the whole browser cache (on both) I could finally log on to Cashwise.  Ahhh!  We tested it a couple of times on my laptop and before I went to bed I did a final tweak of my grocery order for April so I was ready to order in the morning.
****
Meanwhile, Leah tried reinstalling Chrome on the McLap to see if that cleared up the weird loading and having to refresh to use a page issues I've been having.  Nope.  No clue.
****
Dagan figured out that the reason one of my tuners (for recording TV shows) wasn't working was the cord is bad.  Still no clue why the antenna goes bonkers.  Even tried switching to another power strip.  Nada.
****
Everything was done that could be done and they headed for home early.  (We're all tired and Dagan still had work to do from home.)  Was so nice to see them, though.  And they're coming back next week--since we missed some time--so Leah and I can work on cards.  :)
****
The sun comes in at a different angle now in the mornings. 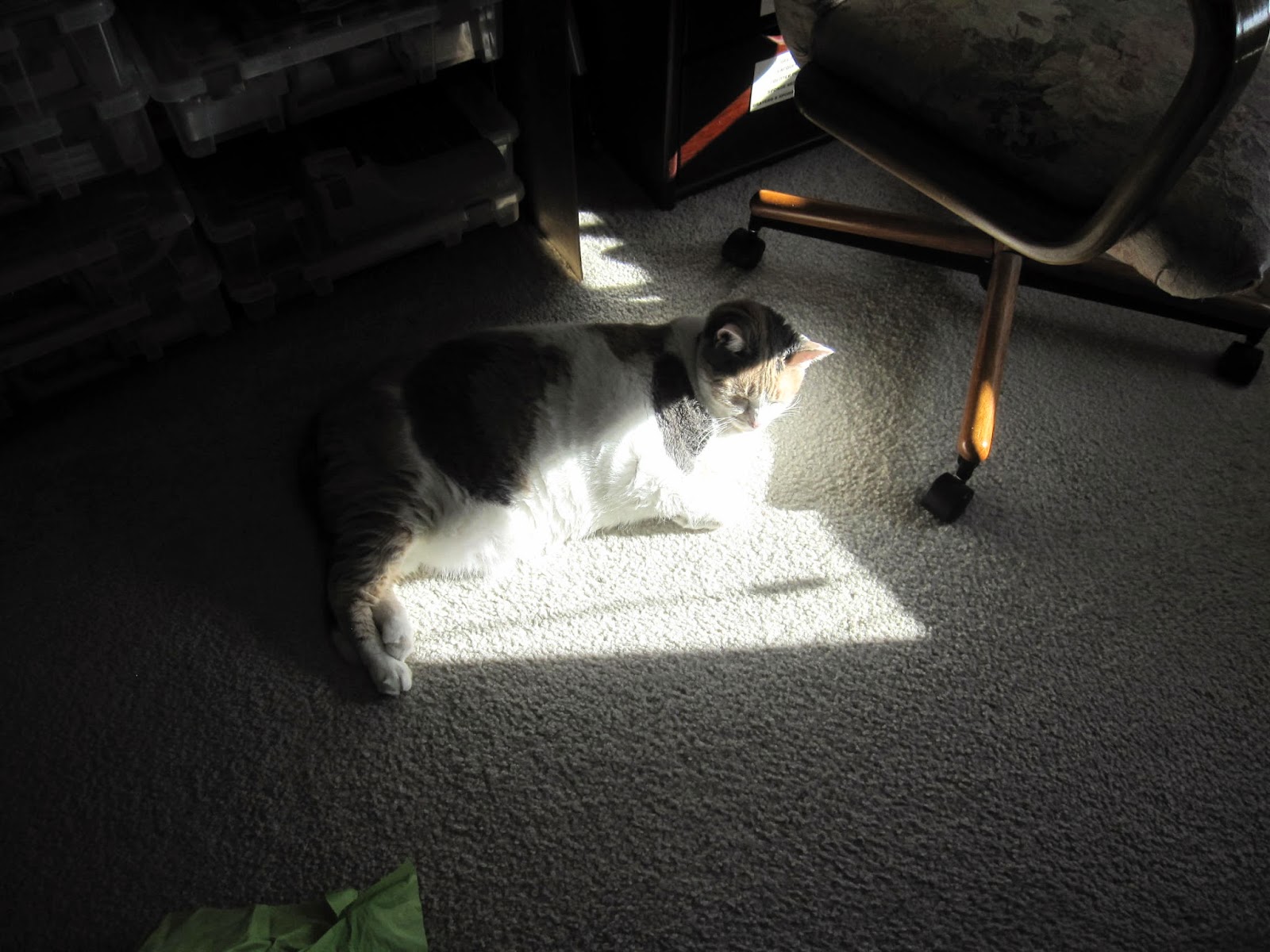 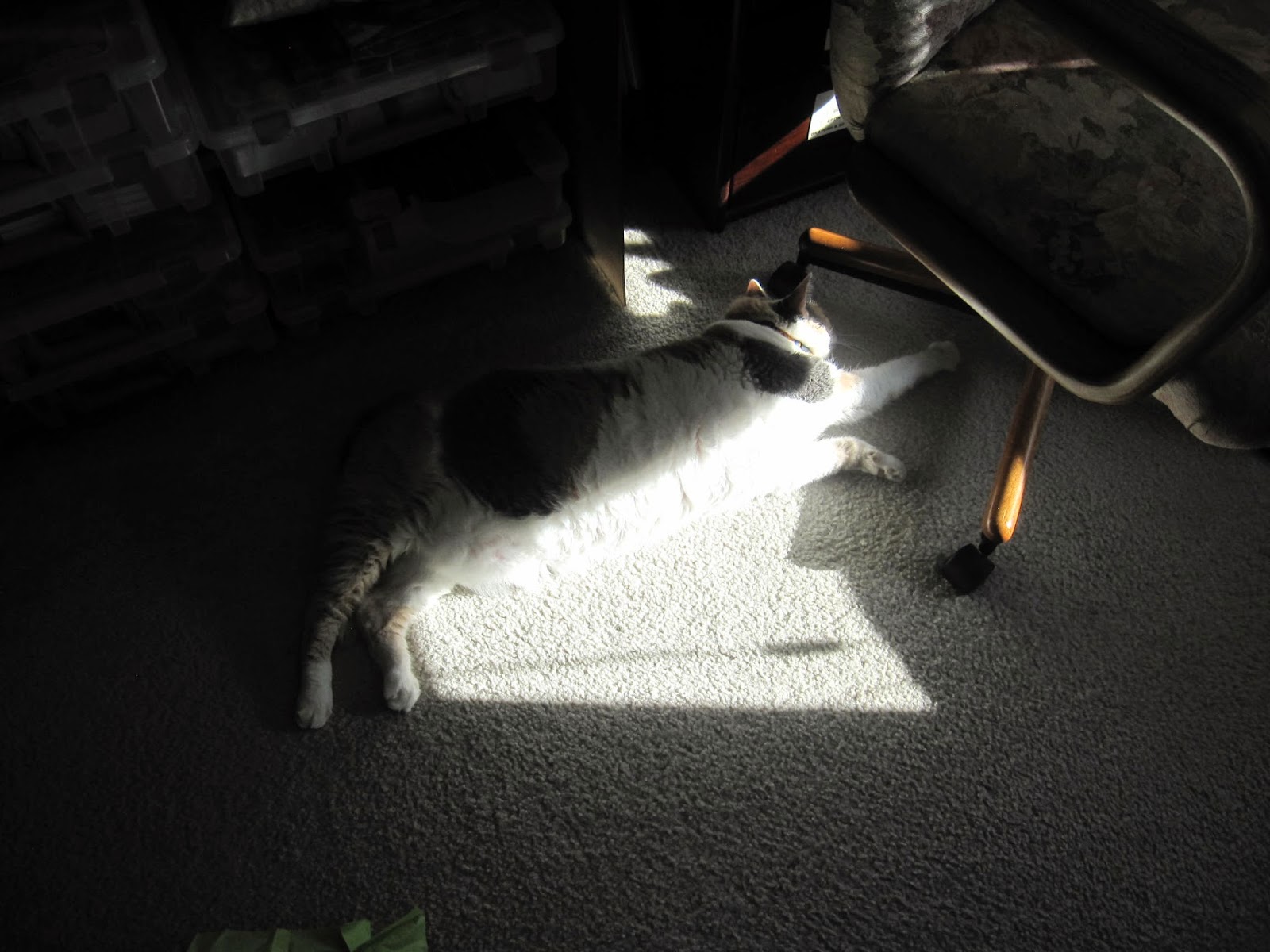 A couple different mornings I caught Karma carpet lounging by my chair at the craft table. 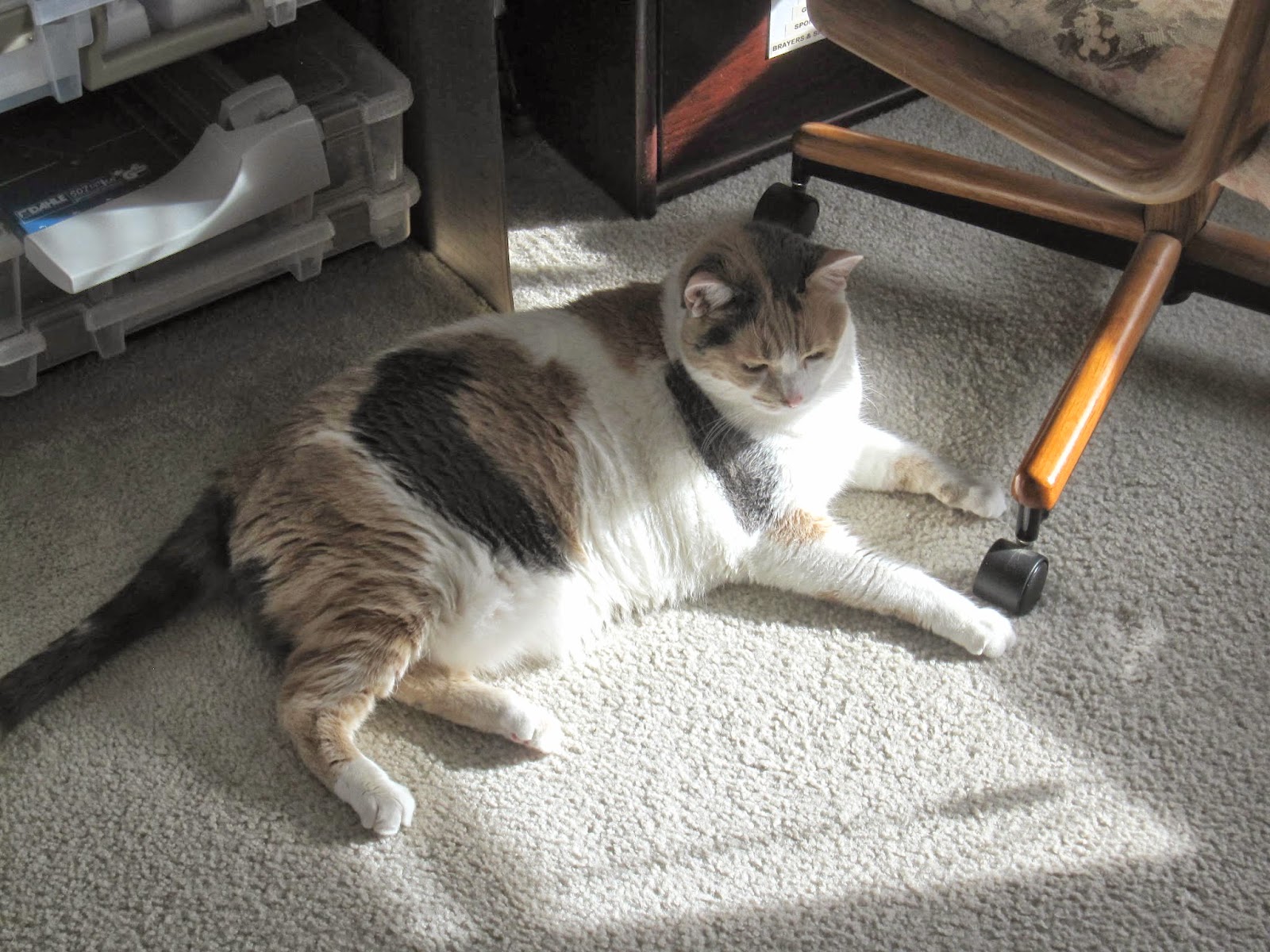 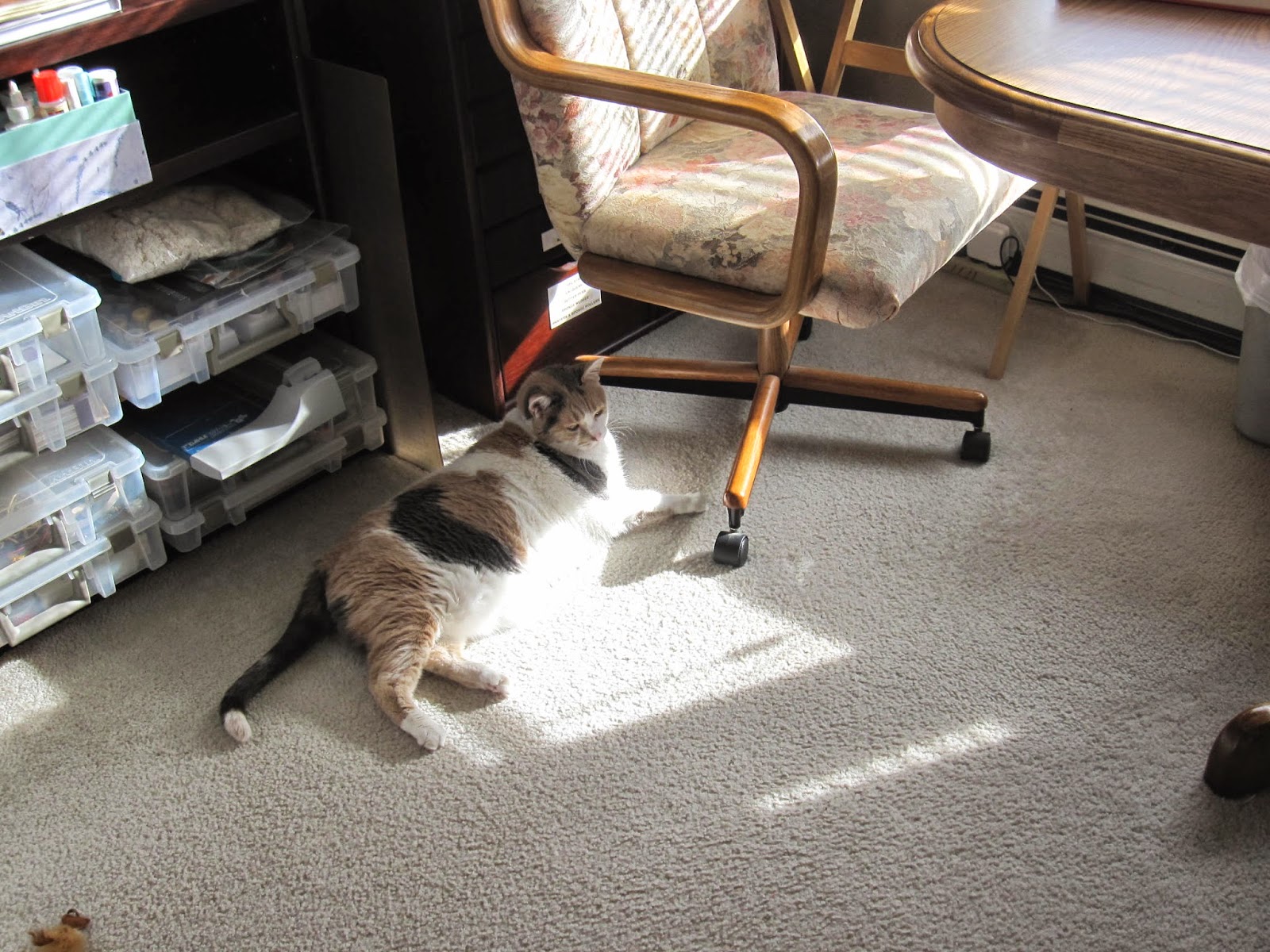 Anyways, I got up on Thursday to make my grocery order...and couldn't log in!  Once again it said that I had made three unsuccessful attempts and to close my browser (which doesn't fix the problem).  The TV computer let me log on so I was able to make my grocery order (which came yesterday).  It dawned on me that I had been on the McLap three times just fine but on the fourth time it won't let me in.  Leah tried it on her computer--same thing.  Can get in fine three times and the fourth time I get locked out.  Their program is reading my log-ins as failed attempts.  So it is Cashwise's problem!  Not mine, at least!
****
But try to explain it to the Cashwise Delivers guy over the phone when you don't speak Computer.  *sigh*  I'll try to call back next week and get somebody else.  [I have never seen "hand ring" written on my receipt before, either--even if it was crossed out.  ??]  So, unless they fix this, every fourth time I will have to clear my browser cache to be able to log in...which I don't know how to do and would have to learn...and afterwards I have to re-log into my other sites, too.  :(
****
Technology has not been my friend lately...and I am too tired to deal with it.  Which makes me want to steer clear of McLap...and explains why I am a week or so behind online.  Sorry.  Hopefully I will catch up over the weekend.
****
The other thing that's going on is I am in the process of slowly switching over to a new, extreme diet.  I figure it will take me a couple of months to be on it as close to 100% as I can get.  Can't afford to do it all at once and will be using up the "not allowed" foods I already have first so I figure it will be June by the time I have both feet in the water.  It's basically an elimination diet.  You eat a very limited diet and take a bunch of supplements (like probiotics) until your system gets back in balance...can be 6-12 months!  Chronic inflammation can cause all kinds of problems (most of which I have) from IBS to arthritis to headaches.  I've been reading about this off and on for the last year or so, but the diet is so extreme that I just couldn't bring myself to taking that huge leap.
****
No processed foods, gluten, sugar, soy, dairy, eggs, or coffee!!  No potatoes, corn, peas, mushrooms, peppers, citrus...the list goes on and on.  :(
****
I was searching online and there are a bunch of diets that are very similar, actually.  Detox diet, Eating Clean, Anti-inflammation Diet, Leaky Gut Diet, diet to reduce belly fat, The Cleanse, etc, etc.  Some are stricter than others.  I am starting out by keeping a few questionable products (according to some of the diets but not others) like rice, oats, nuts, beans, and lentils--because I don't eat meat.  I am going with the more lenient lists, I guess, to start out with.  Several places said that oats don't have the same kind of gluten as wheat...so I am keeping my oatmeal for now, but that one seems the most questionable.
****
This month I did order some gluten free bread and bagels so that I could read the labels and try the taste test.  (Sadly, I do suspect gluten may not be the forever friend I believed it was.)  I ordered six months worth of supplements.  If it takes me two months to slowly cross over, that gives me four months on the full diet with the supplements.  If I don't start feeling noticeably better and have a change in the IBS symptoms, I may have to eliminate more foods--but this is supposed to work.  Once your system feels more in balance then you can start adding back foods one at a time very slowly--like maybe one a week--to see how your body reacts or doesn't react to it.
****
For now, I am just working at the first steps in crossing over into this land of little oral satisfaction--ROFL!  One of the first hurdles for me is limiting myself to only one thermal mug of coffee in the morning.  Sorry, I am not going cold turkey!  I usually drink coffee from the time I wake up until I shut the lights off and go to bed...since I was 17.  It may be only one pot or less a day these days, but I am used to sipping coffee all day and night.  Hey I have Swedish genes, ya know!  I can't even imagine life without coffee.  I need to be weaned.  Slowly.
****
I can drink green and herbal teas.  Almond or rice milk.  Water.  Some say lemon juice.  I can use stevia for sweetener--and a few other things I've never heard of like Yacon syrup?  LOL!  Going to make a trip to Tochi's (and Target) on Thursday with Leah.
****
All I can say is wish me luck!
I feel like I'm praying for a miracle!
****
My main motivation is McBaby, of course.  ;) 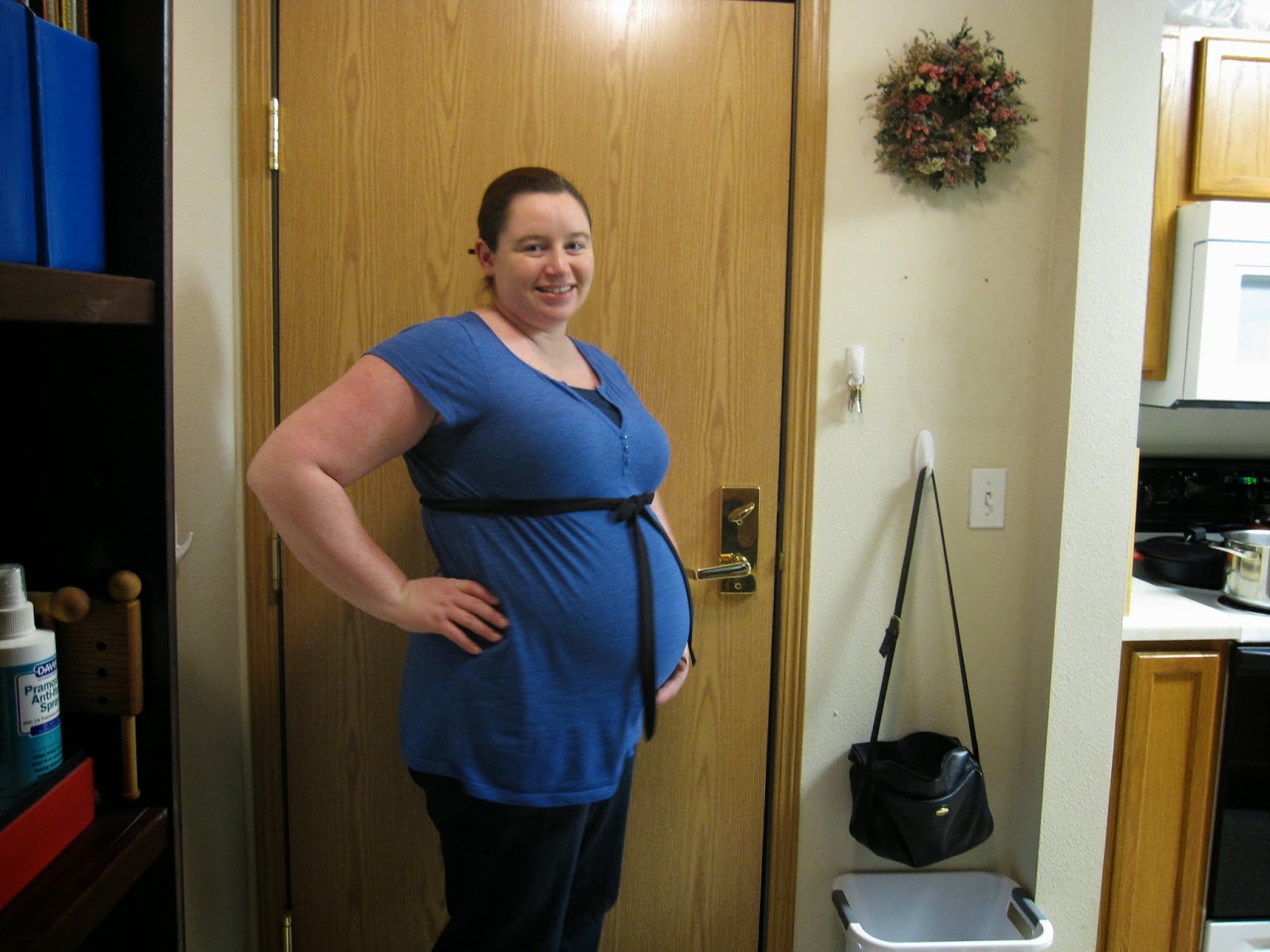 If my knees didn't swell and hurt so badly I might be able to get down on the floor once in a while to play blocks.  That's a lot of incentive for Gramma Rita, ya know!  ;)
****
Have a great rest of the weekend!  :):)
****
Oh!  Oh!  I found the perfect quote to help push me onward into the land of no chocolate chip cookies!
****
"Do not pray for tasks equal to your powers. Pray for powers equal to your tasks. Then the doing of your work shall be no miracle, but you shall be the miracle."
Phillips Brooks
Posted by Rita at 12:11 PM