Good Morning!  Yes, I'm still alive and kickin' up here.  Feel much better but still dealing with the cold and feeling very tried.  From what I hear this tail end part just hangs on for dear life--LOL!  Grab a cupppa (for me it's black coffee, of course) for T-Stands For Tuesday.  Lots of pictures since it's been a week since I've been here to chat.
****
You can see how smeared and dirty my windows are up here.  All I get is reflection of my camera when I try to get pictures close through the window (and the recent blizzard did nothing to help that with its dry snow beating against the glass). 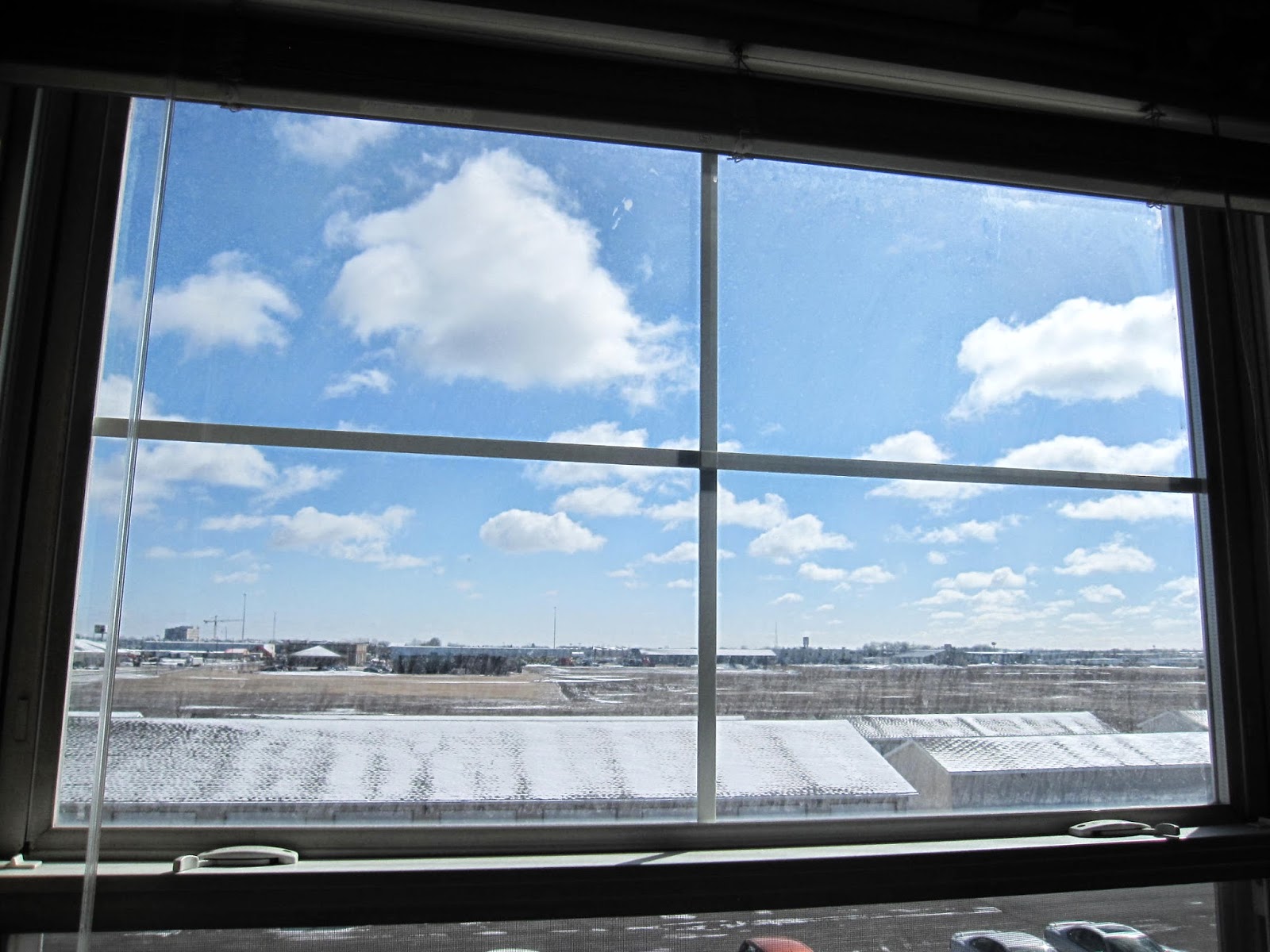 Karma's been loving being next to me at the craft table on her TV tray perch. 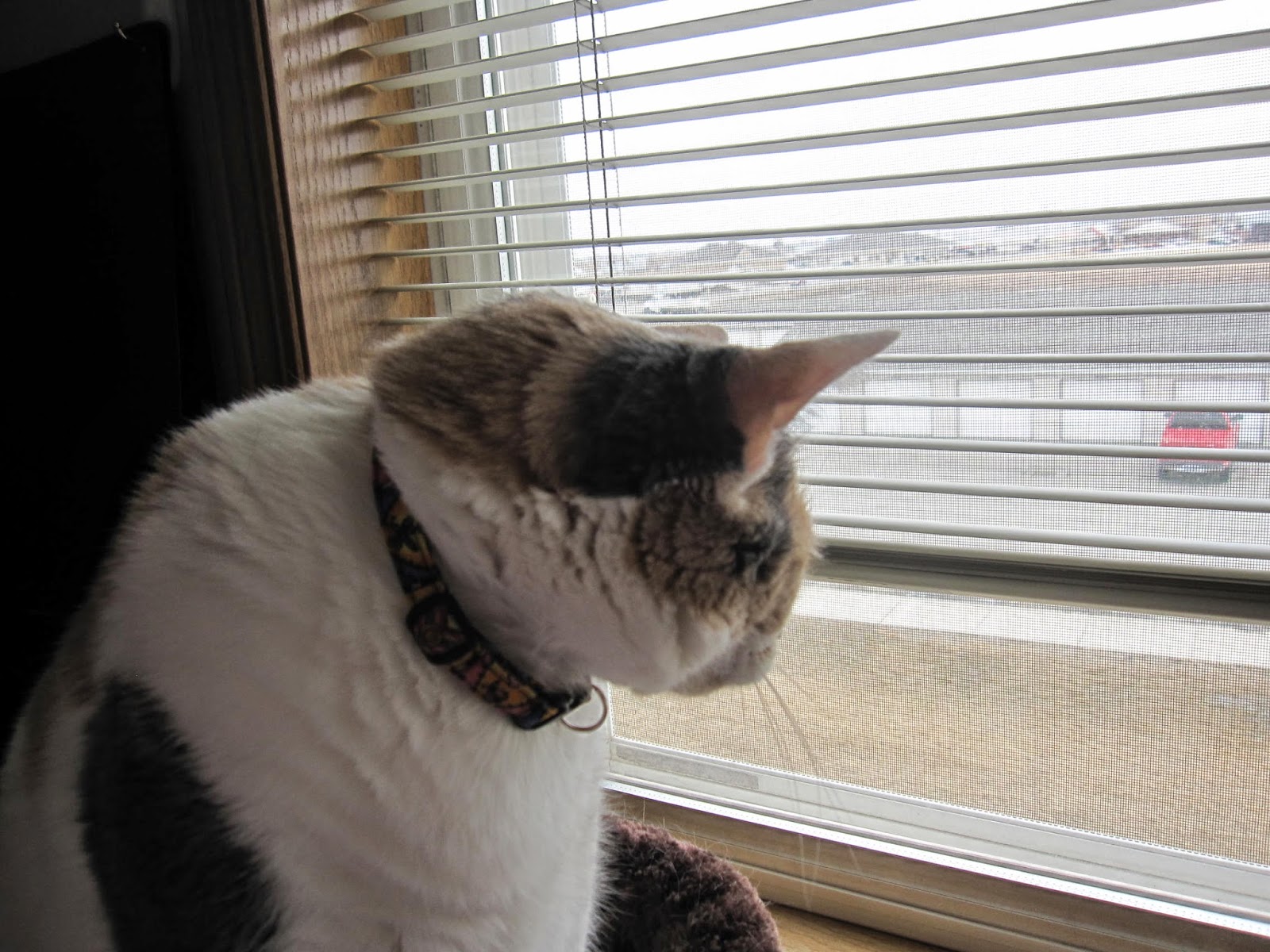 She gets her chin scratches... 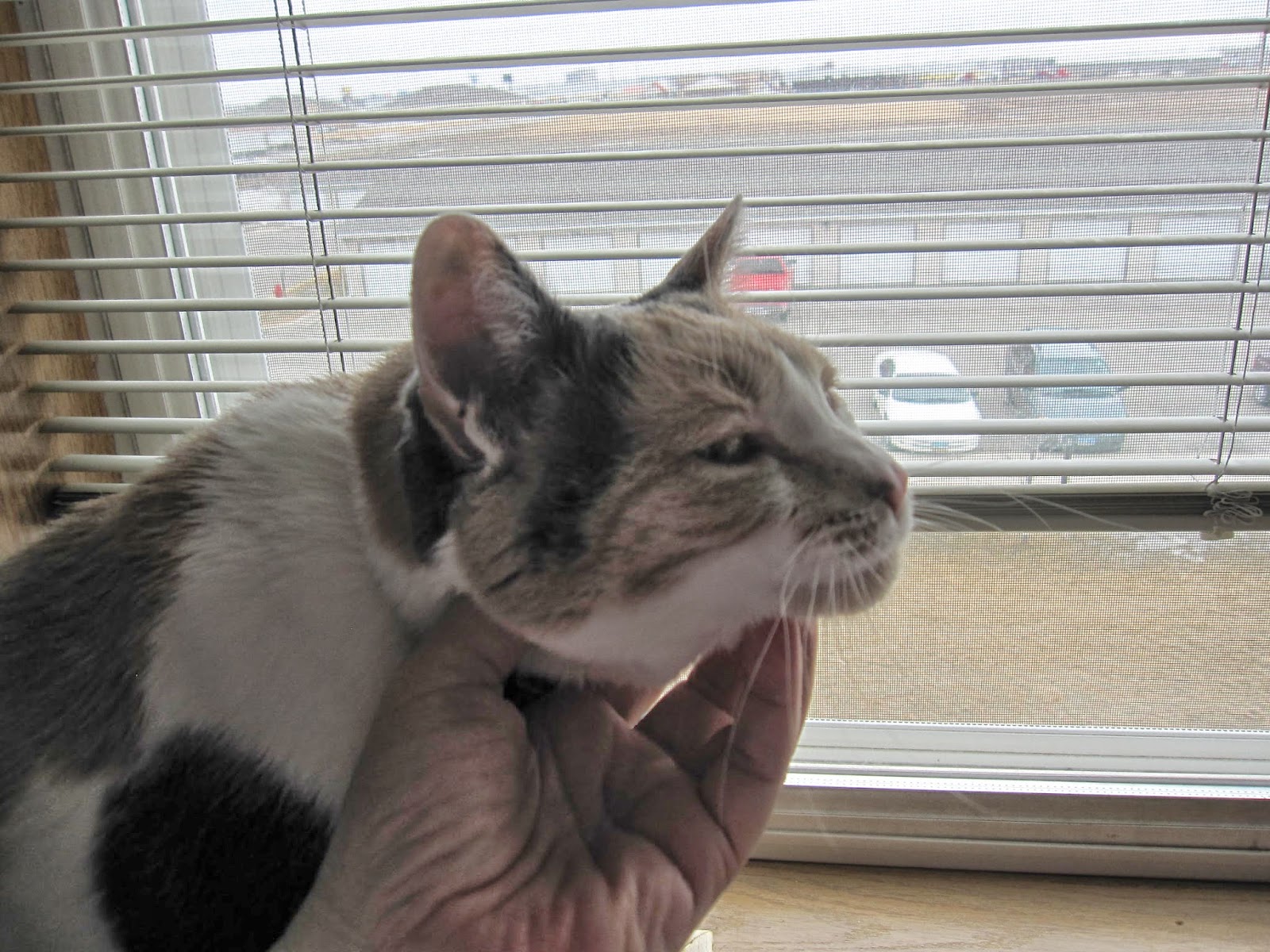 ...and loves thumb rubs under her collar.  It had been brown up here for long enough that I switched over to her summer collar, but I jumped the gun a little--LOL! 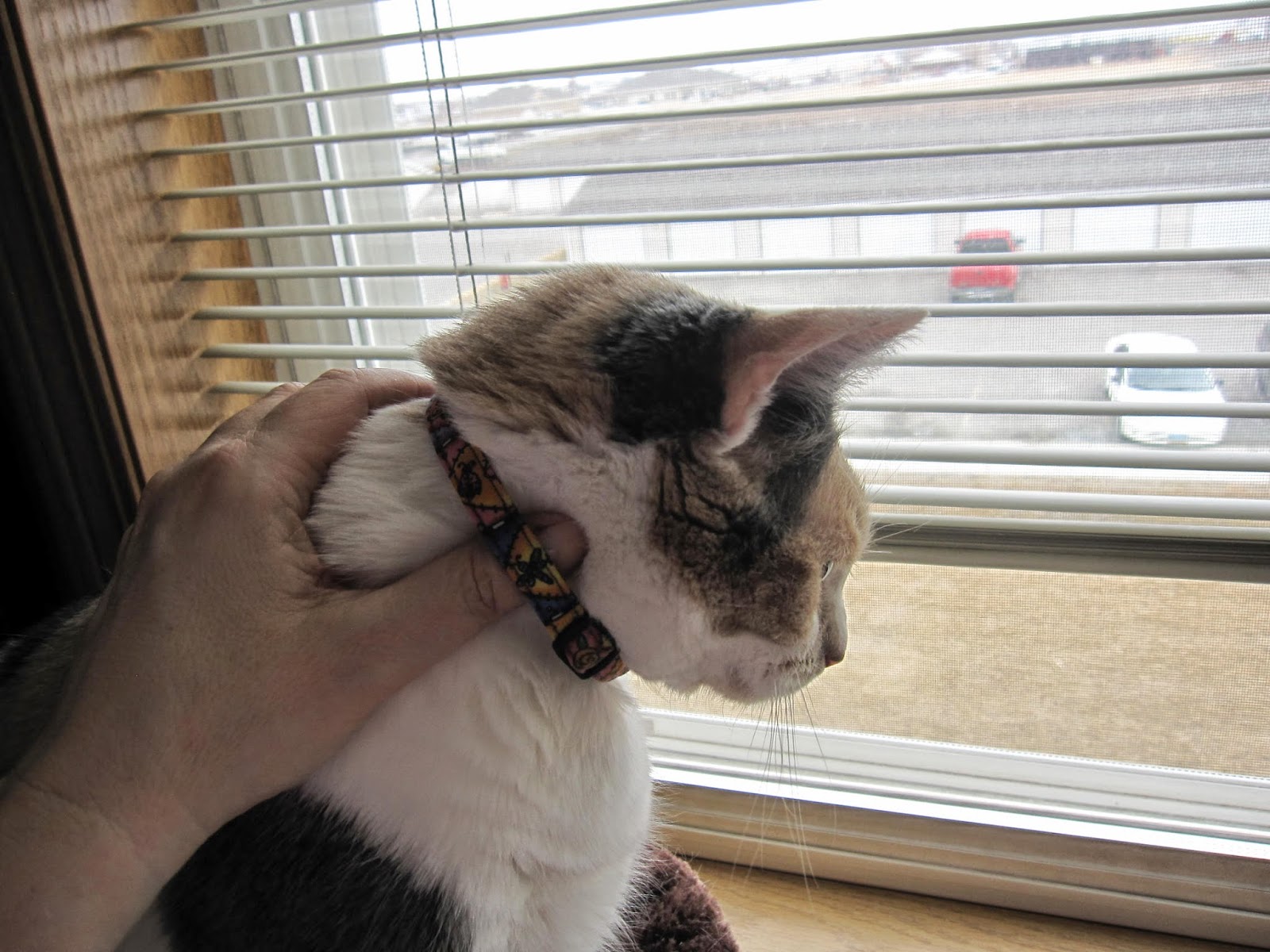 I got another birthday package! 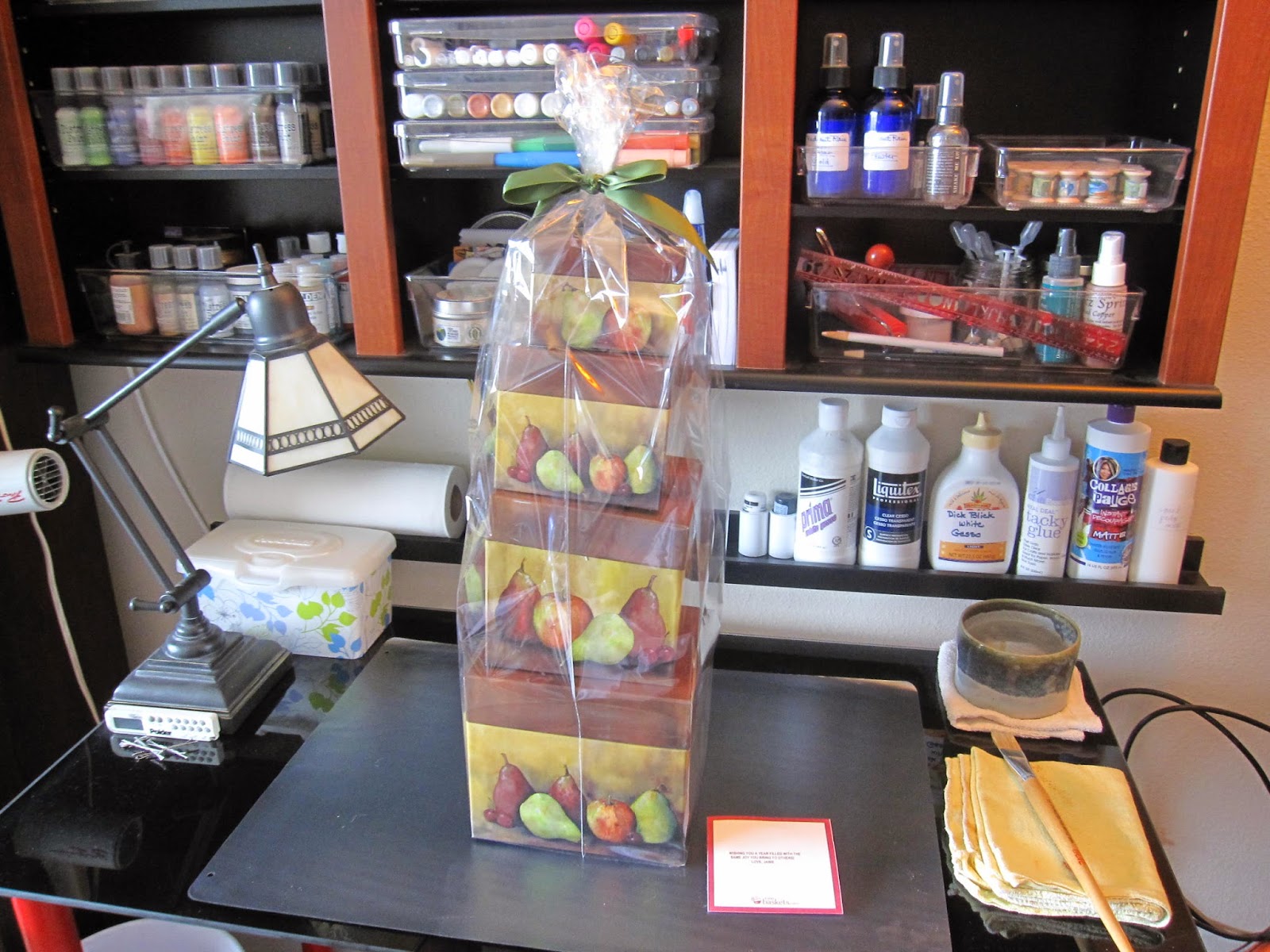 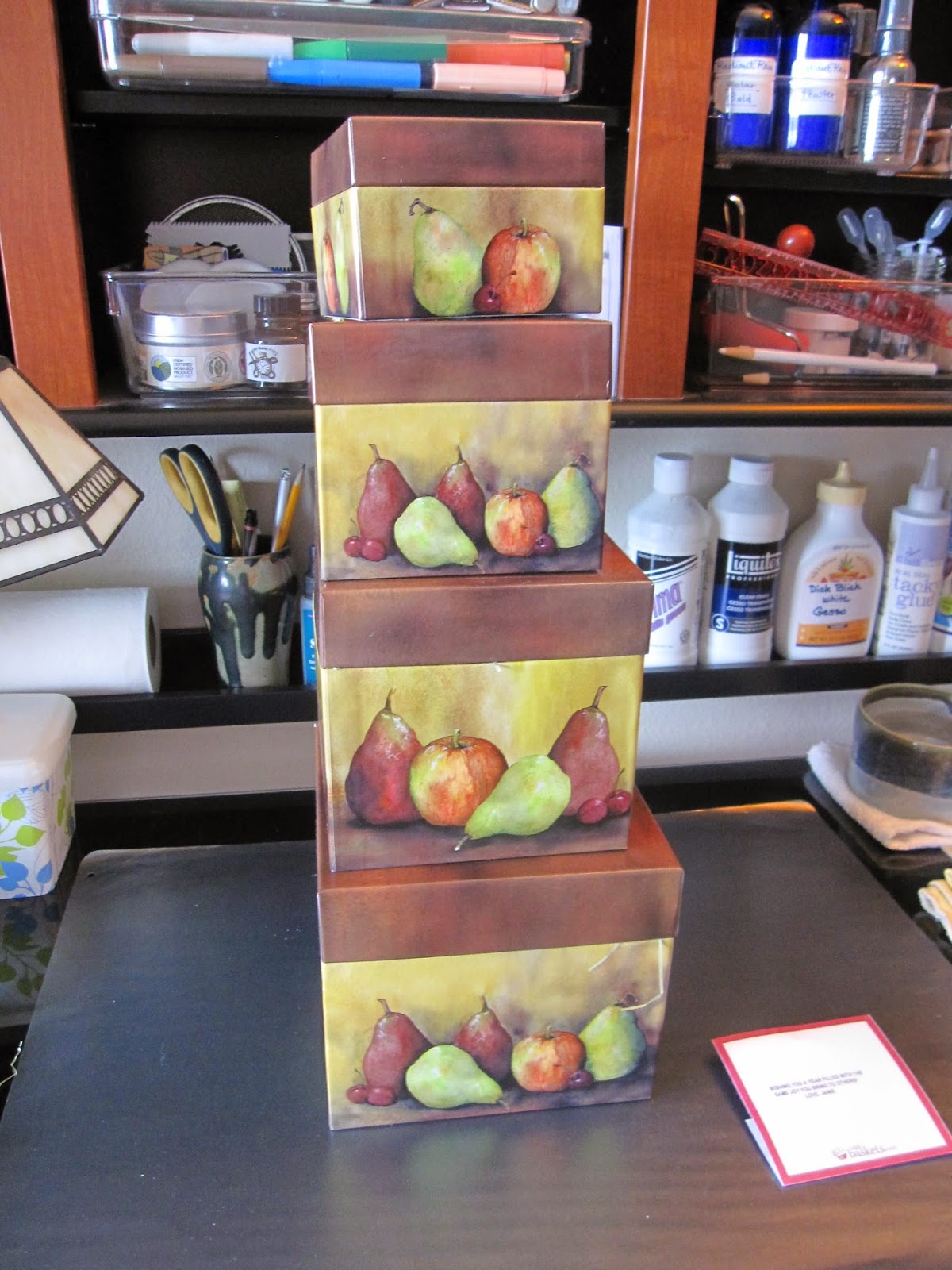 This tower of boxes was filled with fruit and snacks! 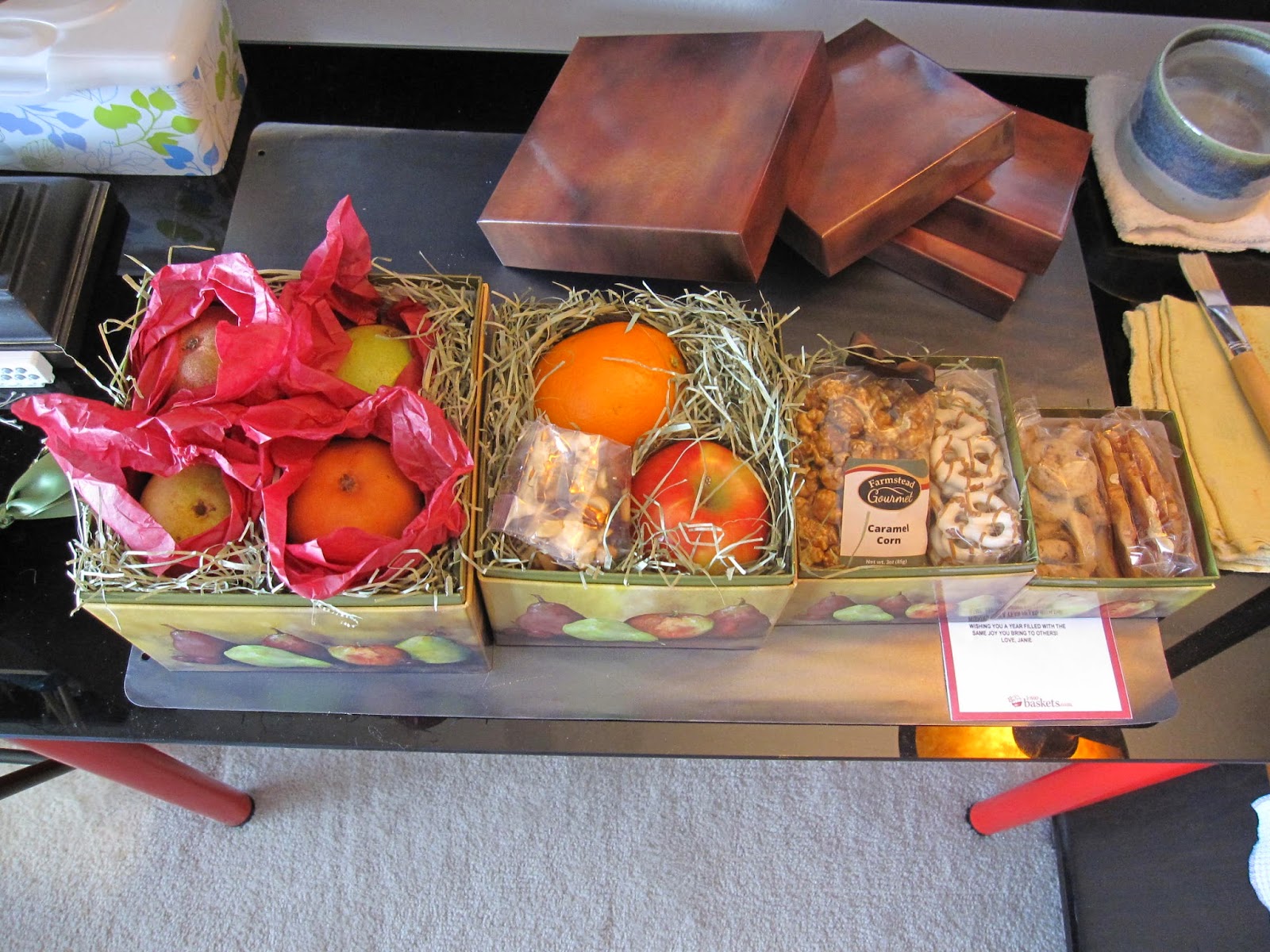 And you know I will find a use for those pretty boxes!  Thanks, Janie!! 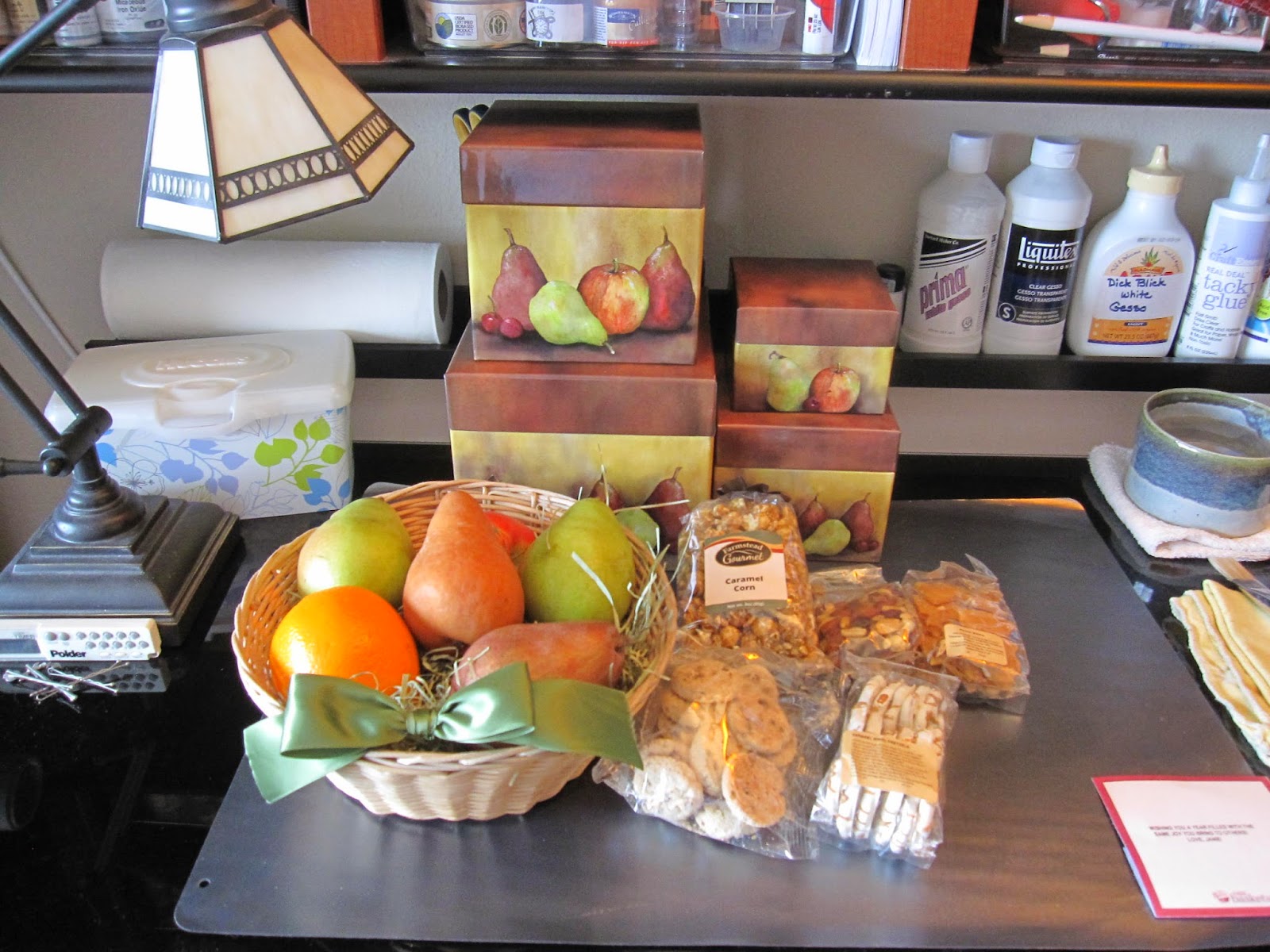 I have felt so special this birthday with the wonderful comments, emails, ecards, gift cards, snailmail cards, and presents!  Goodness!  Thanks to each and every one of you for really making this such a sweet birthday even though I was (and still am) sick and fairly miserable.  Really lifted my spirits more than I can tell you.  :):)
****
On Saturday it was 43 degrees (6 C) and so windy they said it felt like 33 degrees (0 C) but we had kids playing ball outside with no coats and a couple in shorts!  All the ice had melted out of the yard. 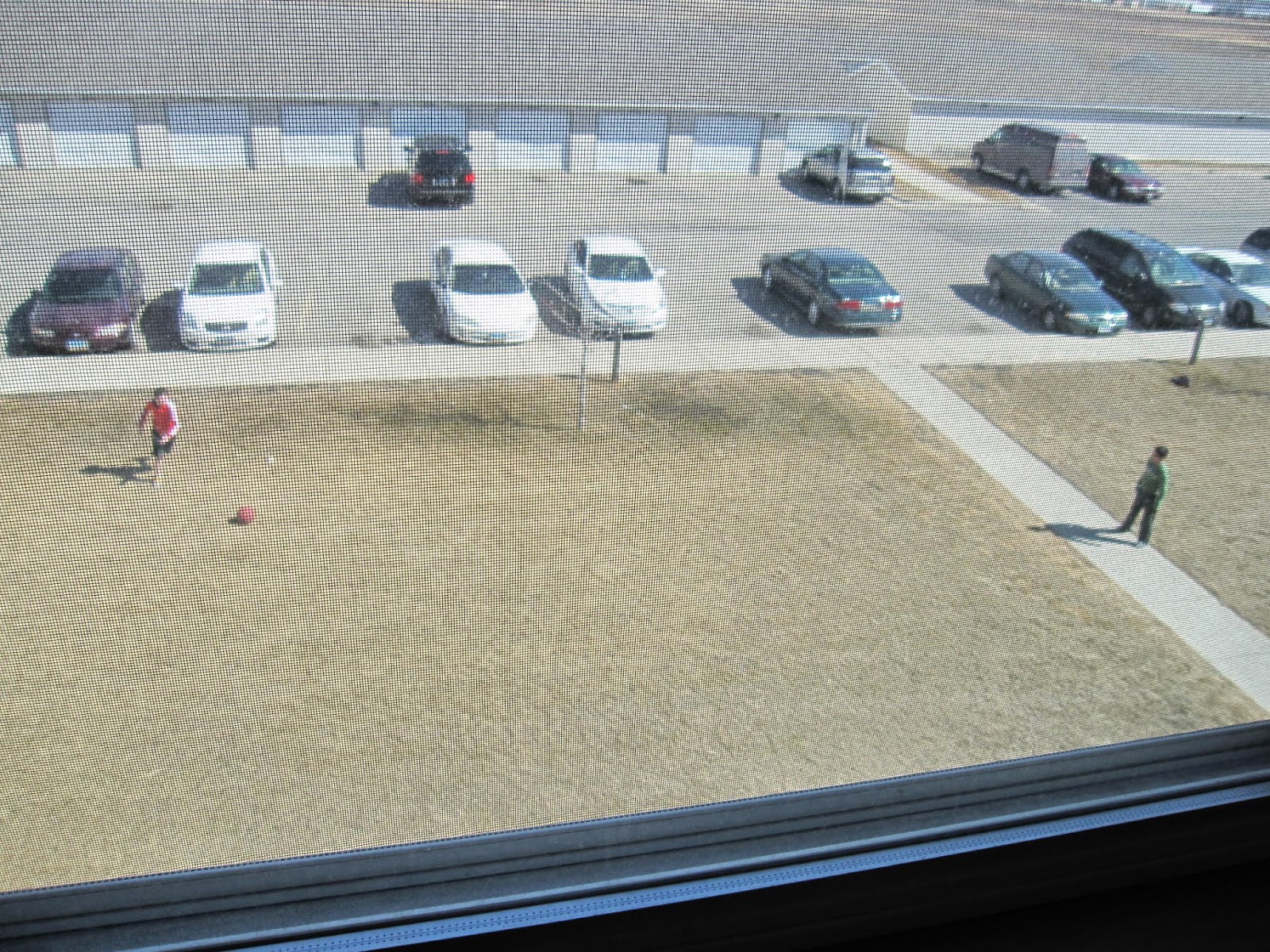 They were predicting a blizzard moving in Sunday night and horrible travel for Monday morning.  The storm didn't arrive until late afternoon here.  It hit farther north than expected and instead of getting 6-12 inches or more of snow here we only got 2-3 inches.  But highways 94 and 29 were closed down overnight--no visibility--and it was as white as could be out there with howling, pounding wind.  North of here Grand Forks got 11.5" and Grafton got 20" of snow!  So we were lucky.
****
What did I do during the storm?  Worked on the test papers.  Got all the markers and pens gathered up... 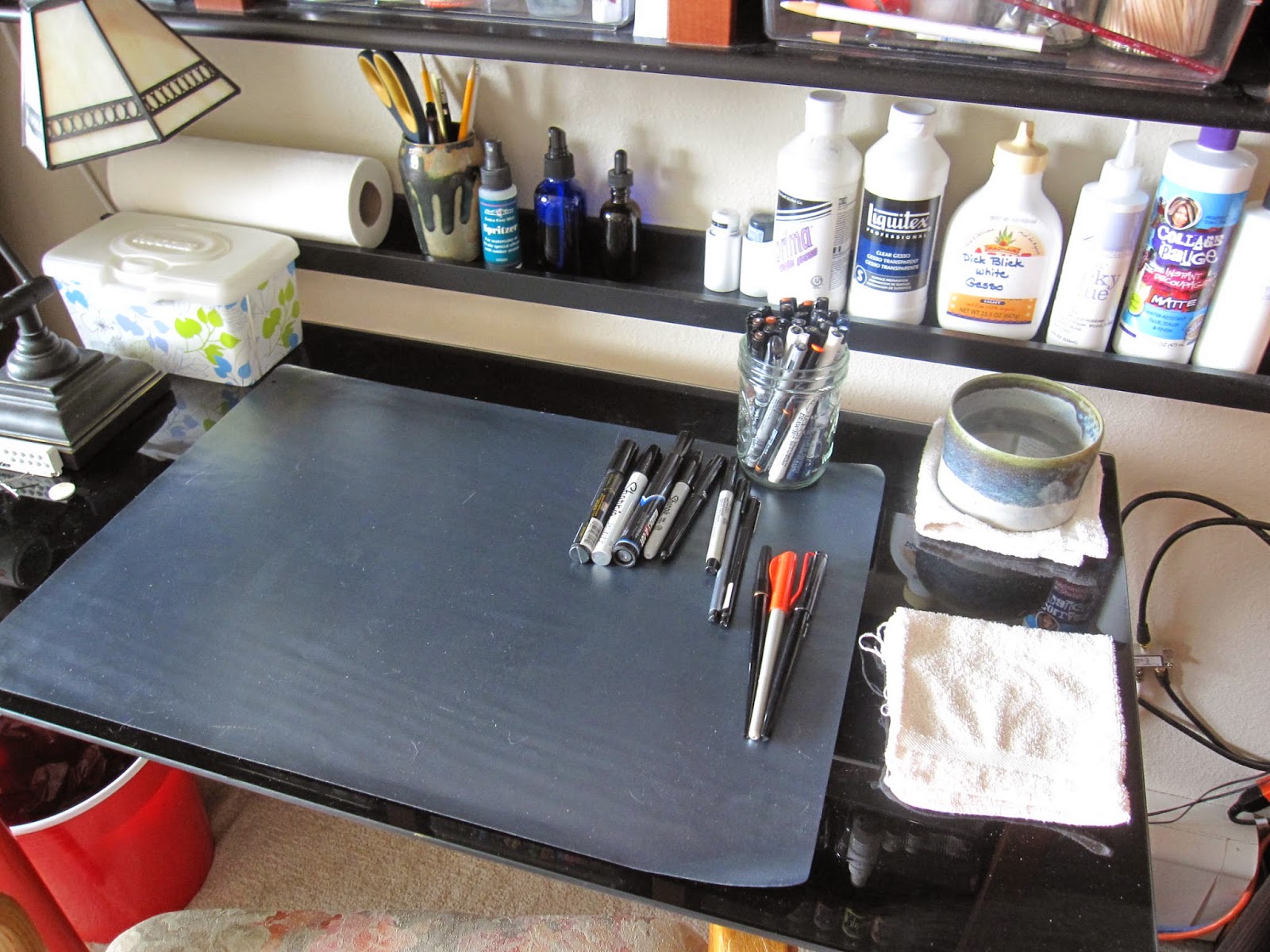 ...and worked on the eleven sheets one by one. 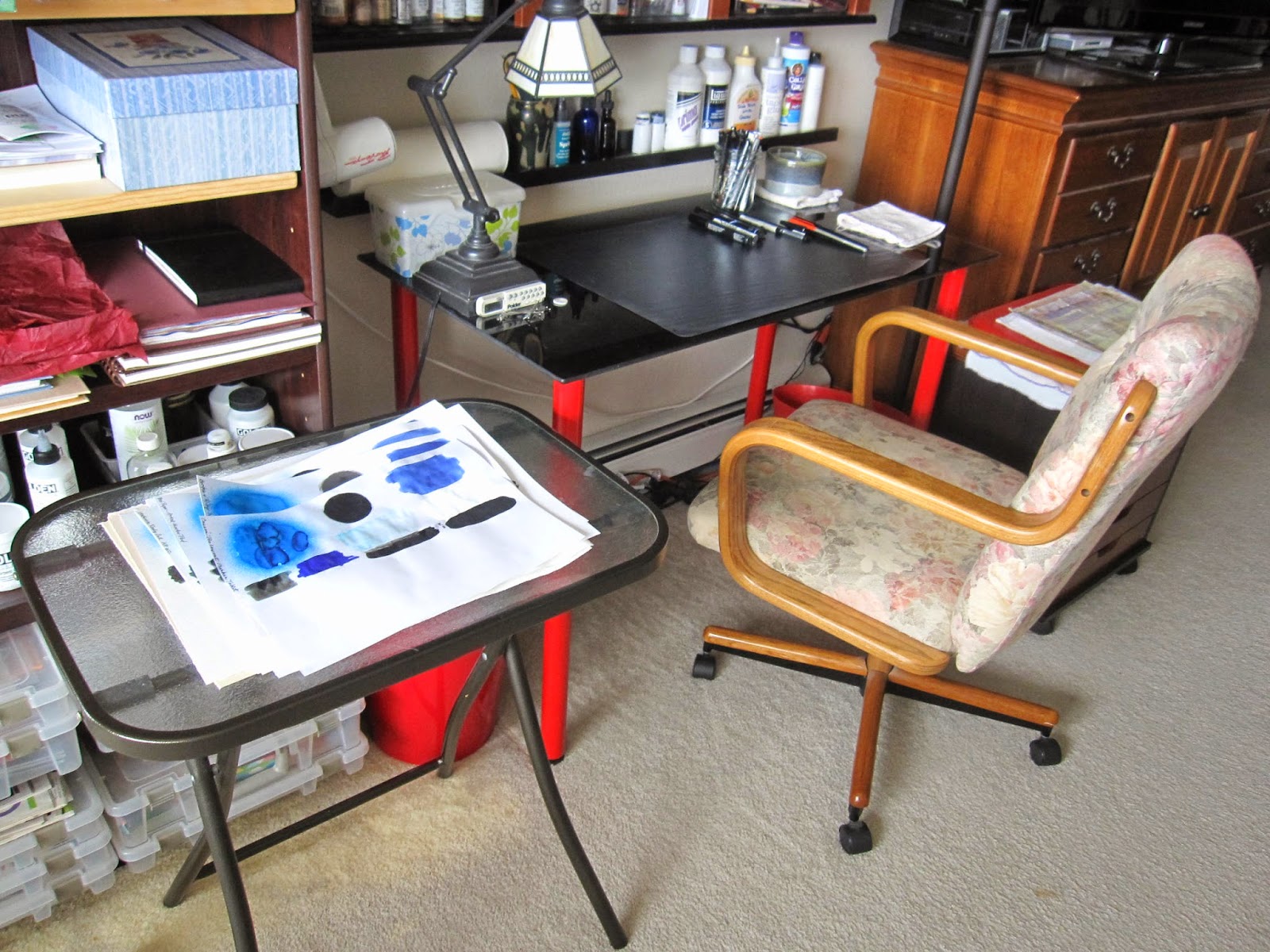 This morning was bright, sunny, and calm after the storm. Blew so hard that most of the drifting is up against the building. 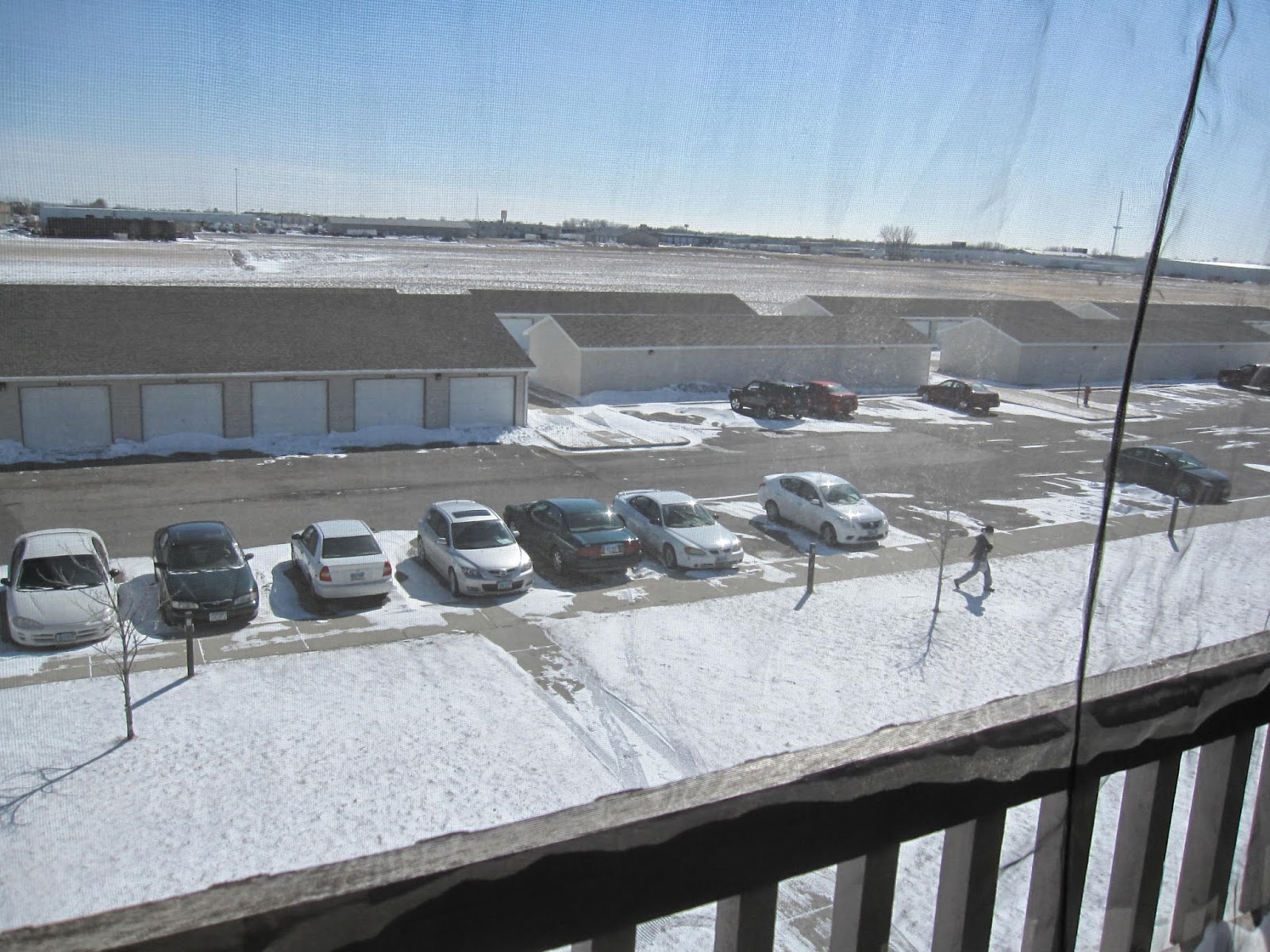 Karma wanted to go check out the snow on the porch, of course.  I was holding the screen door open with my foot as I snapped pictures and she wondered why I had the door open, interfering with her sunny corner. 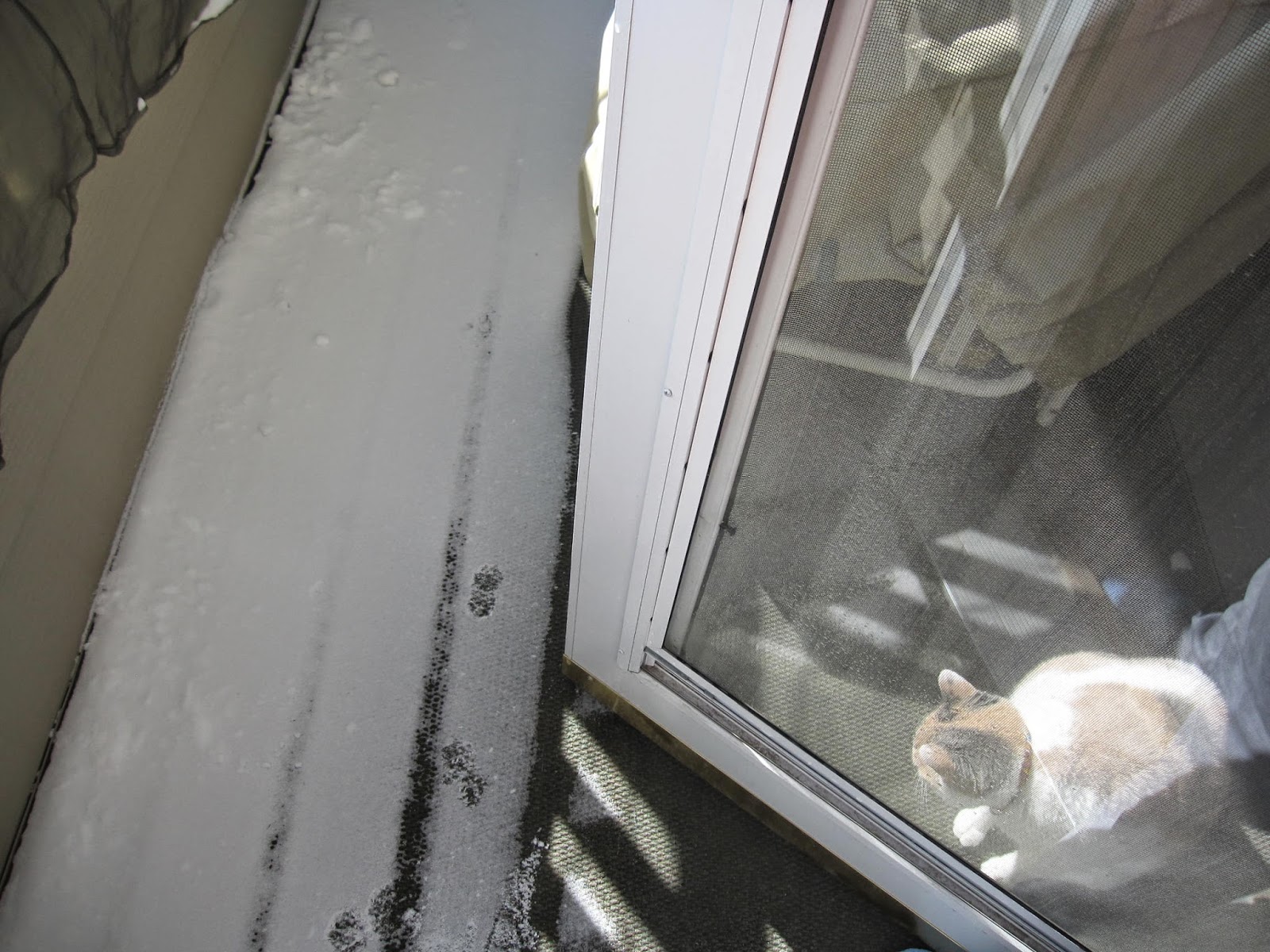 I finished the test papers!  Here's the stack.  If this is of no interest to you--feel free to scroll on past.  ;)  From the top, left to right: Dylusions sprays (used two of them to really saturate), black Distress paint, blue watercolor paint sopped on.  Then below that I put a thick layer of two Noodler's inks (black and Baystate Blue--which is the stainiest blue I know), ModPodge, gesso--and under those two big smears is a long thick layer of Sumi ink and black craft acrylic paint.  Below all those went all the markers and pens. 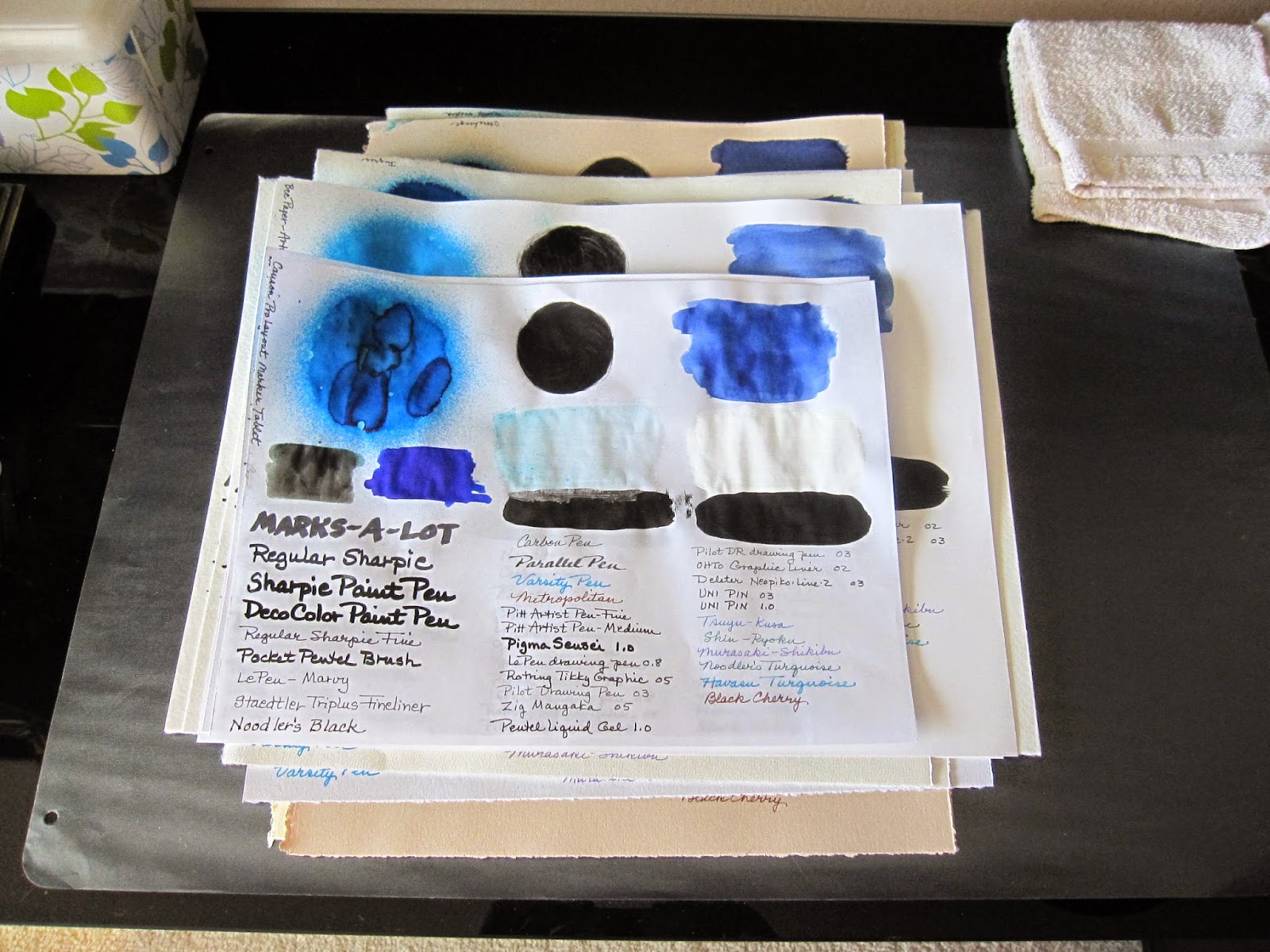 These three which are torn down from large sheets did really well and would be good for mixed media.  Left to right: Canson Rivers, Aquarelle Multimedia, and Stonehenge. 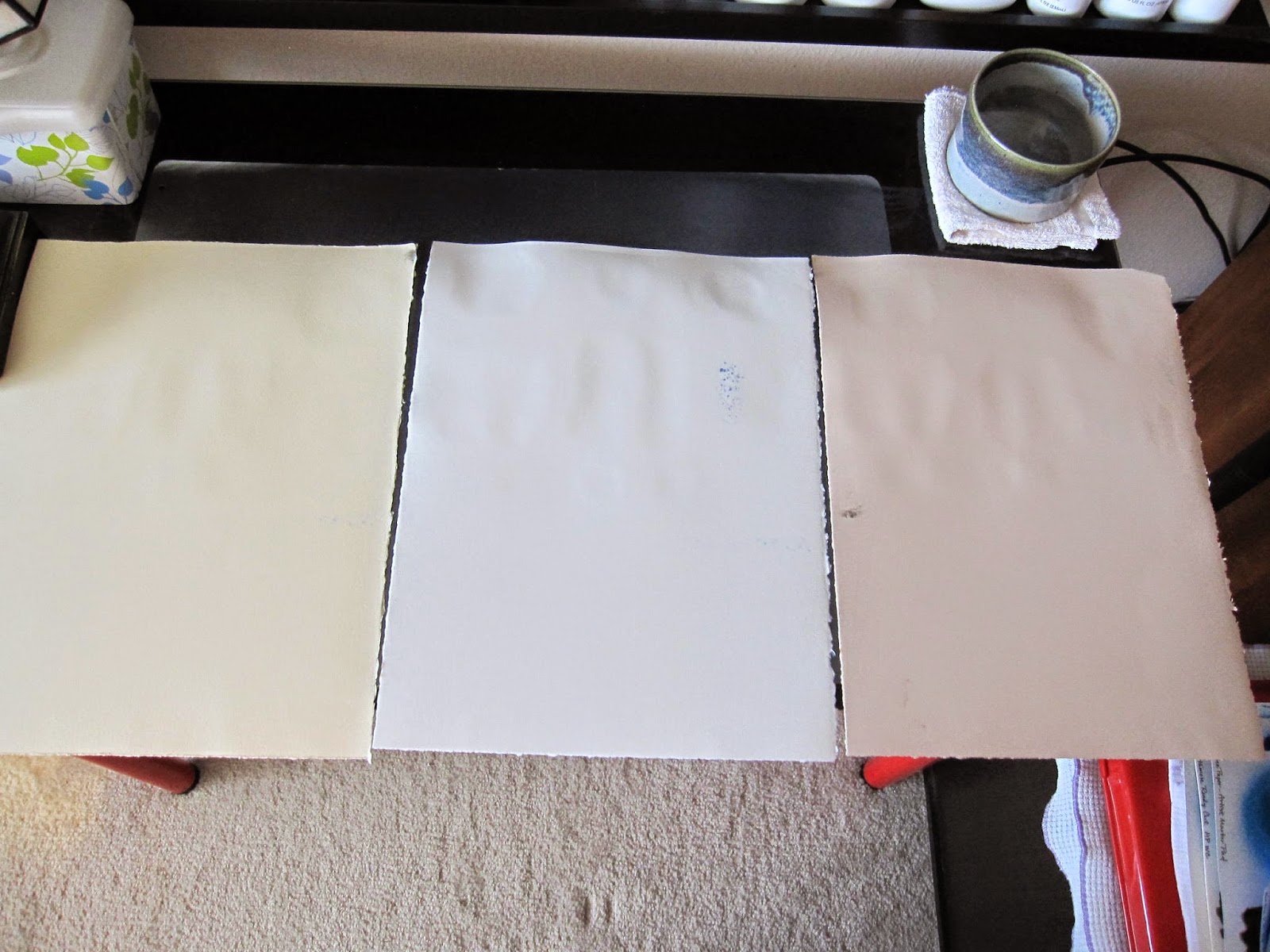 The Aquarelle Multimedia paper didn't do well with the Baystate Blue ink--but nothing else bled through any of them and there was pretty mild buckling. 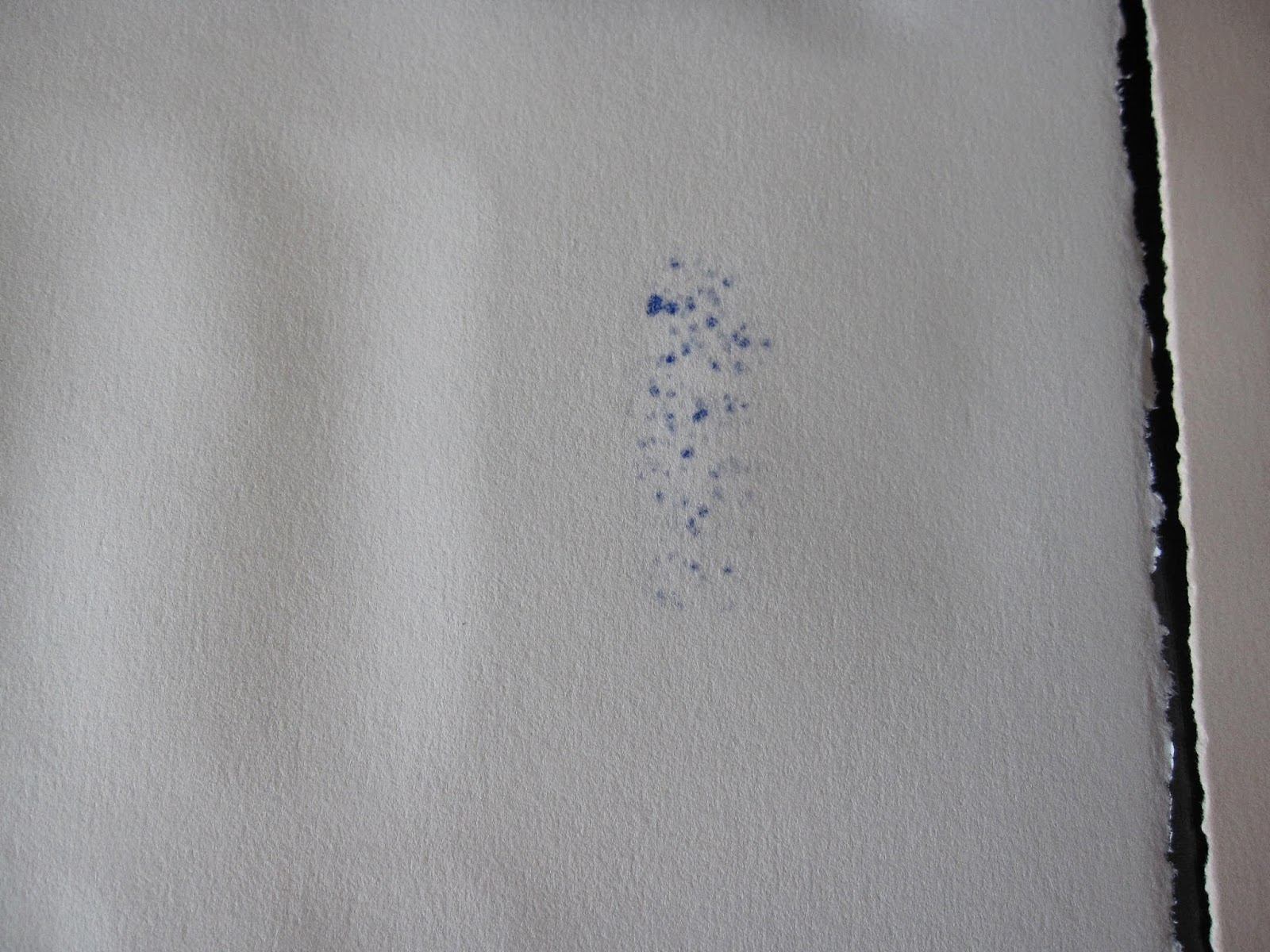 Next Canson Drawing Paper and Canson Bristol.  No bleed through at all and only buckling when really wet.  These performed better than I expected. 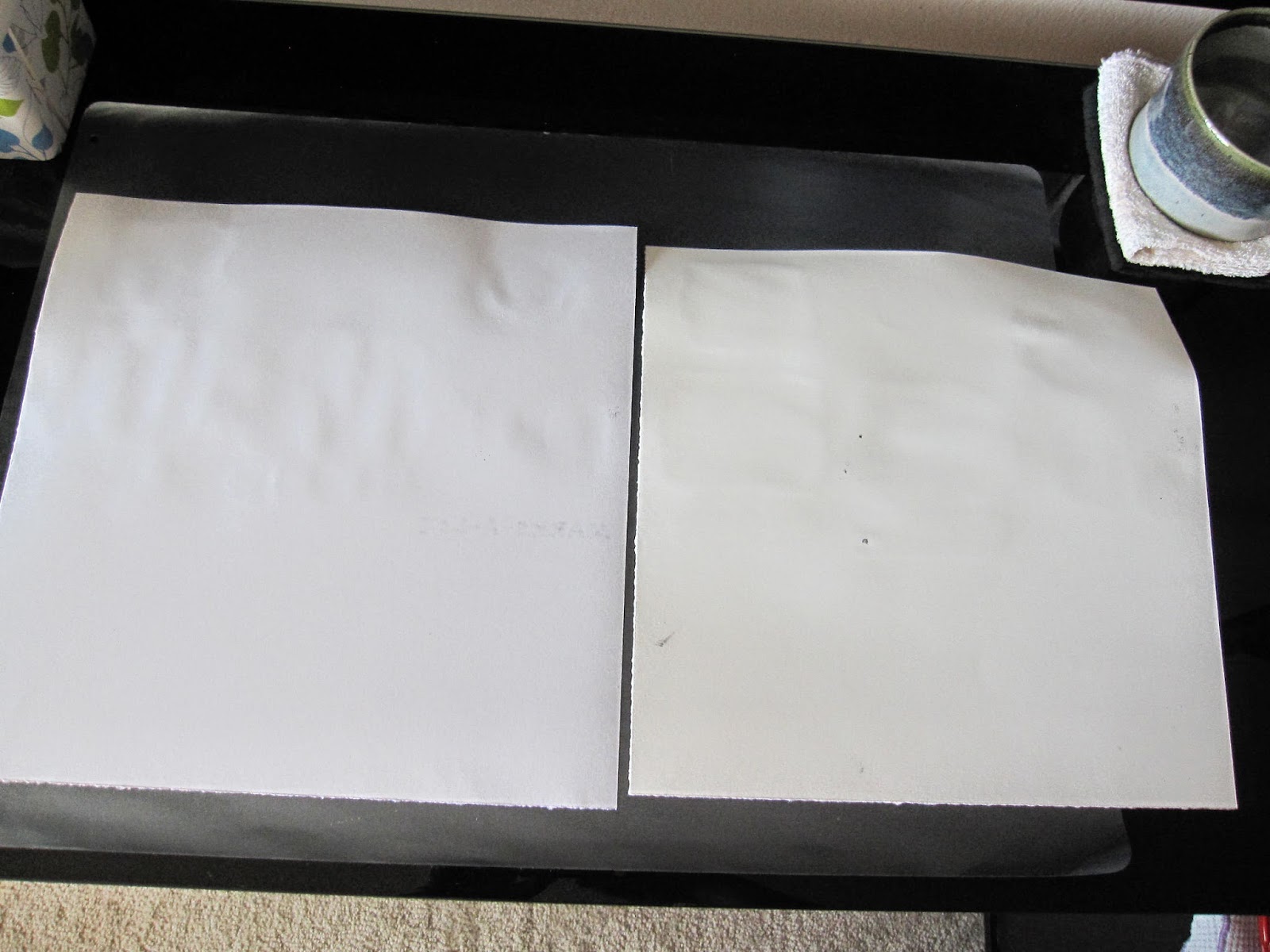 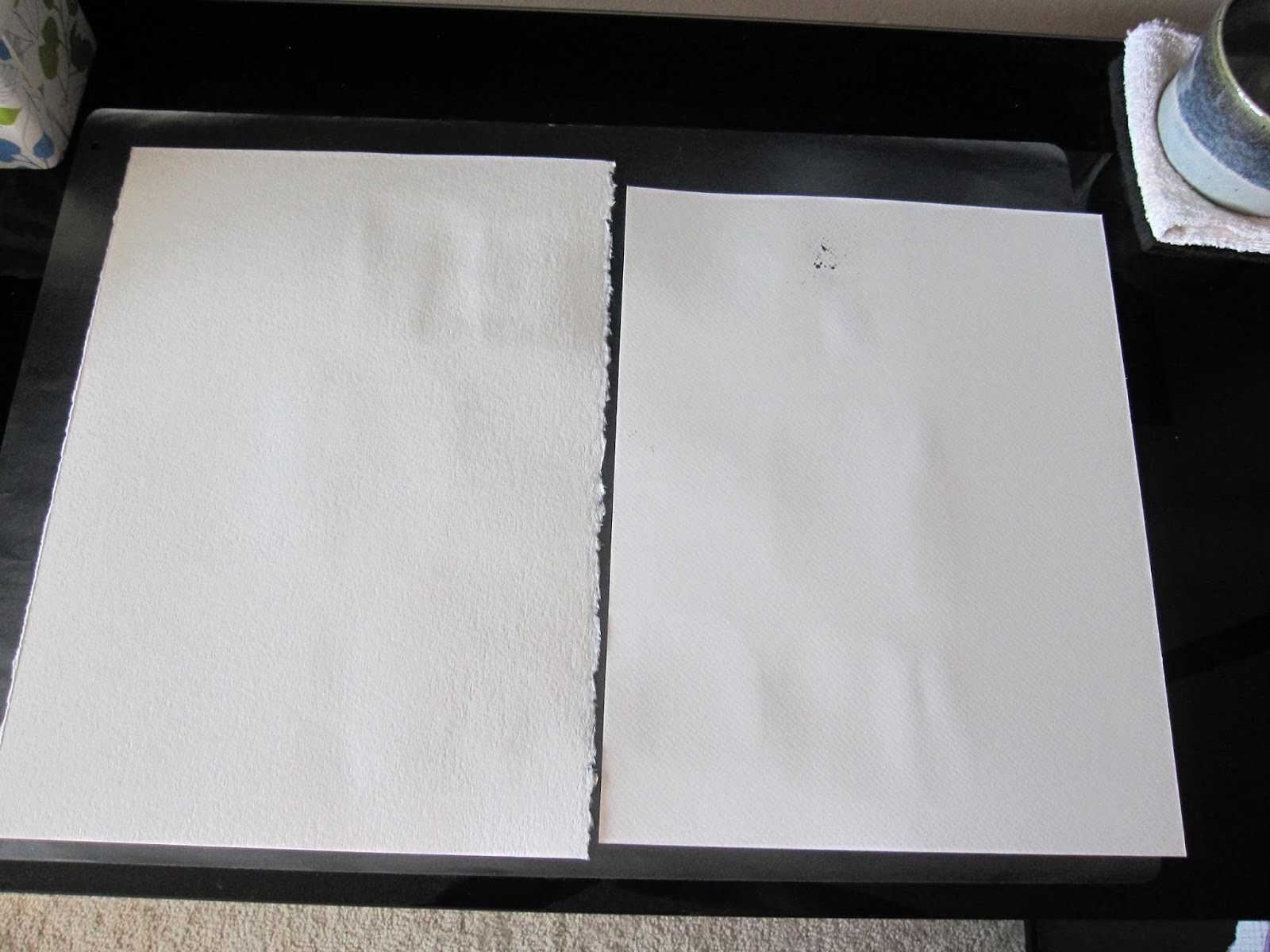 Next is the Ingres sheet paper and the Bee Artist Marker Pad. 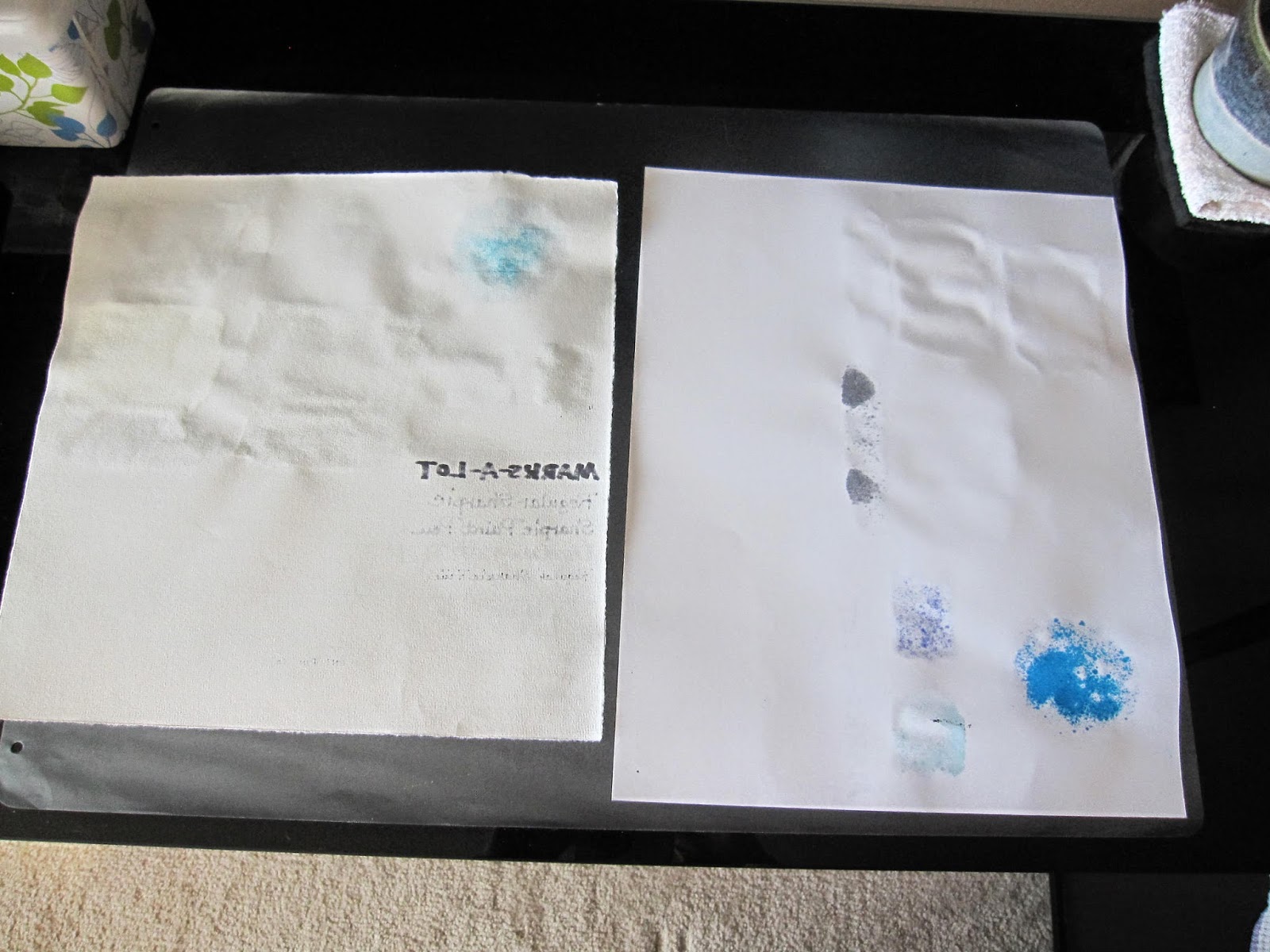 The Ingres paper appeared to be so porous and thin that I was actually shocked at how well it performed.  I didn't expect it to do well at all with the wet media and yet the only one that bled through was the Dylusions spray!  Buckled to beat the band, but didn't bleed--not even the Sumi Ink.  I expected it to bleed with the markers: Mark-A-Lot and regular Sharpies, but it did really well on all the drawing pens except for the Uni Pin 1.0 and the paper was easy to write on even though it has some texture to it.  I was quite pleasantly surprised!  No wet mediums, though, unless you want a lot of buckling. 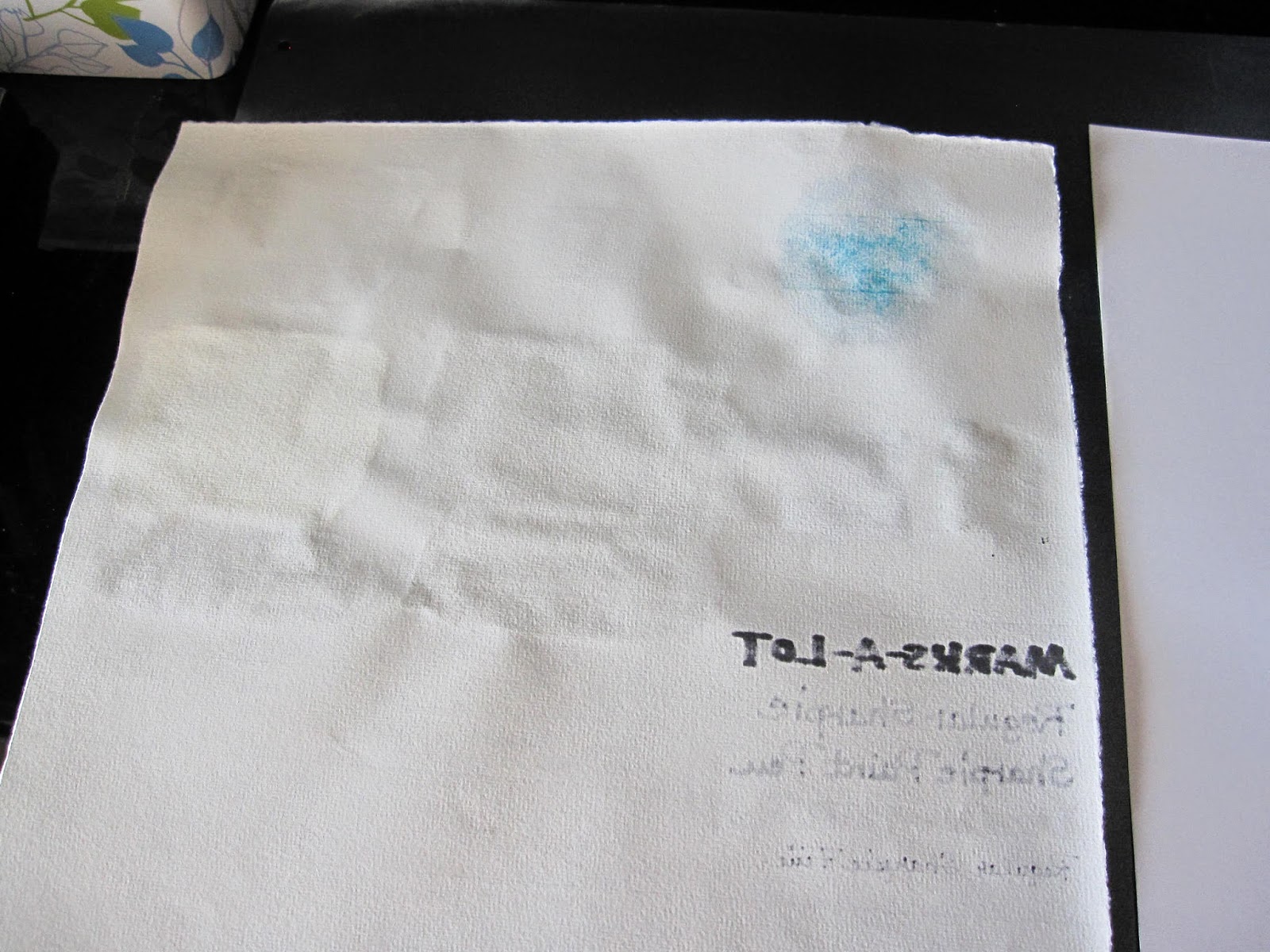 This Bee Artist Marker Pad--well, the Sumi Ink bled through--along with both the Noodler's Inks--and the Dylusions.  Since this paper is meant for markers I didn't really expect the fountain pen inks and sumi to bleed through.  But it did even take on the Marks-A-Lot marker without bleed through.  It's very smooth and would work well without a really wet application. 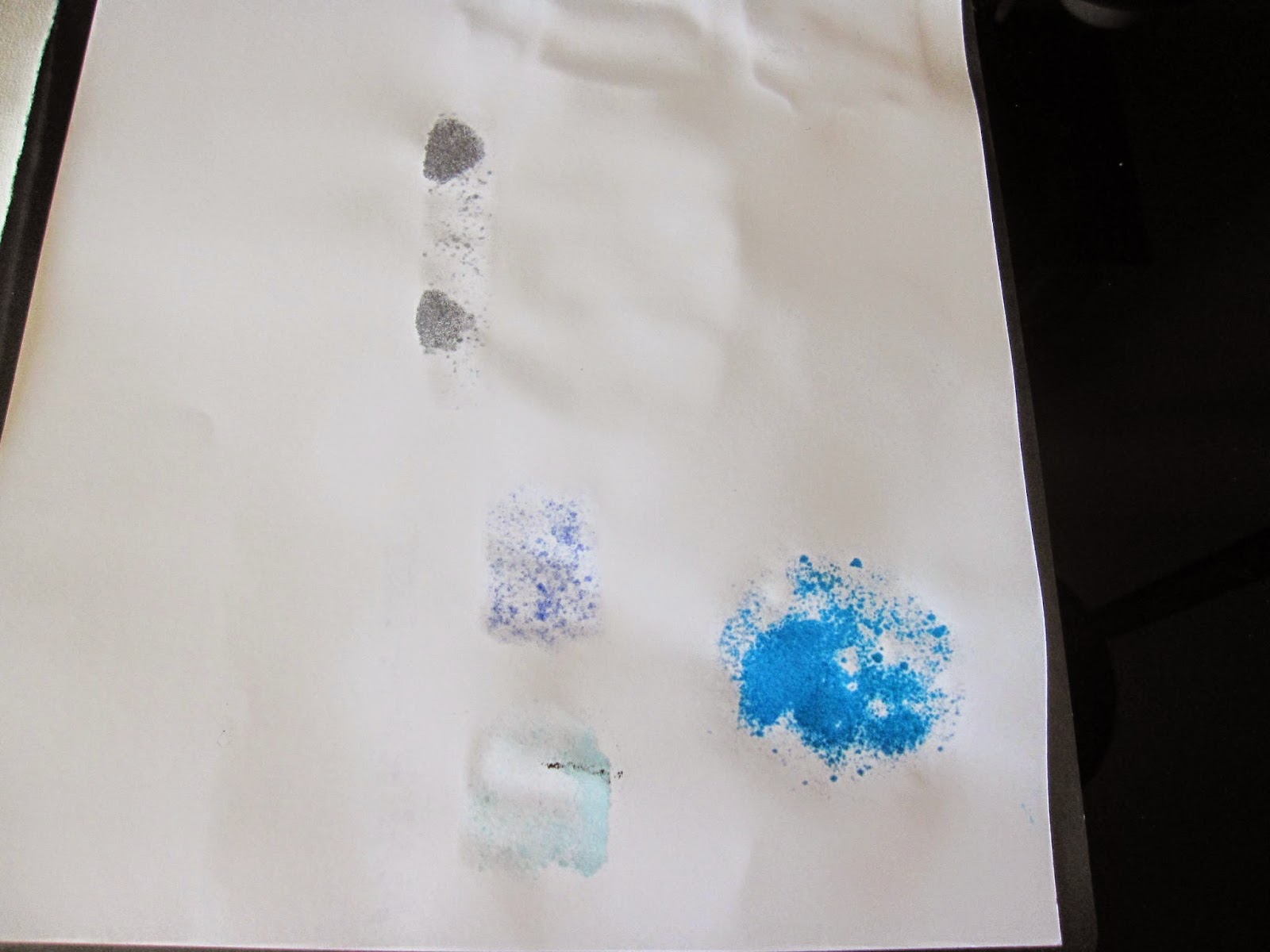 And lastly we have the Borden & Riley Bleedproof Paper For Pens tablet and the Canson Pro Layout Marker Tablet. 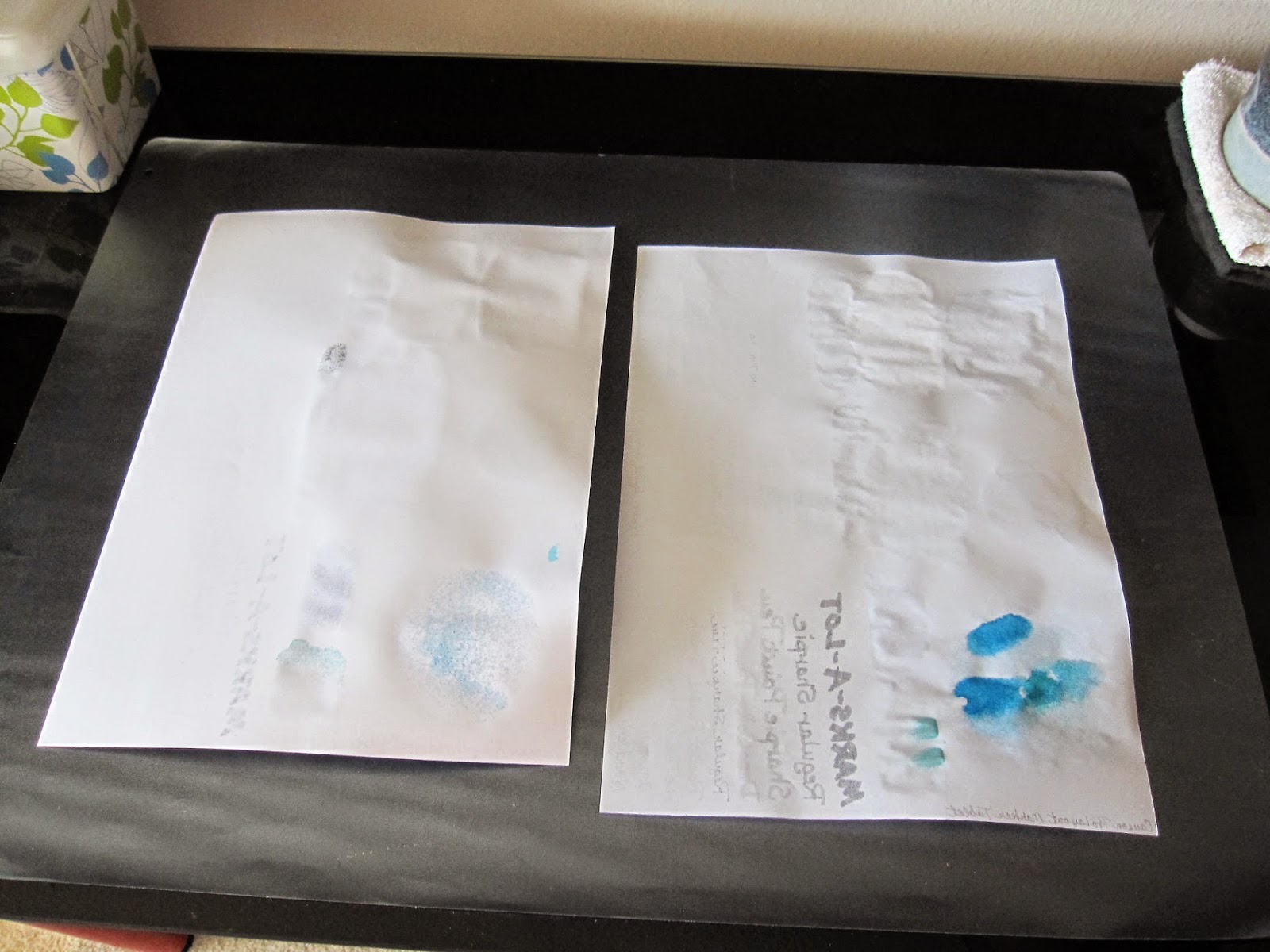 The Bleedproof Paper For Pens--well, the Sumi ink blotch and both the Noodler's ink blotches bled through--and the Dylusions some.  But it did pretty well with the permanent markers--except the big old Mark-A-Lot marker did bleed through and the Sharpies-almost.  Using pen on this paper for drawing and writing would be fine, but no really wet applications or permanent markers if you want to use the back side in a journal.  Very smooth. 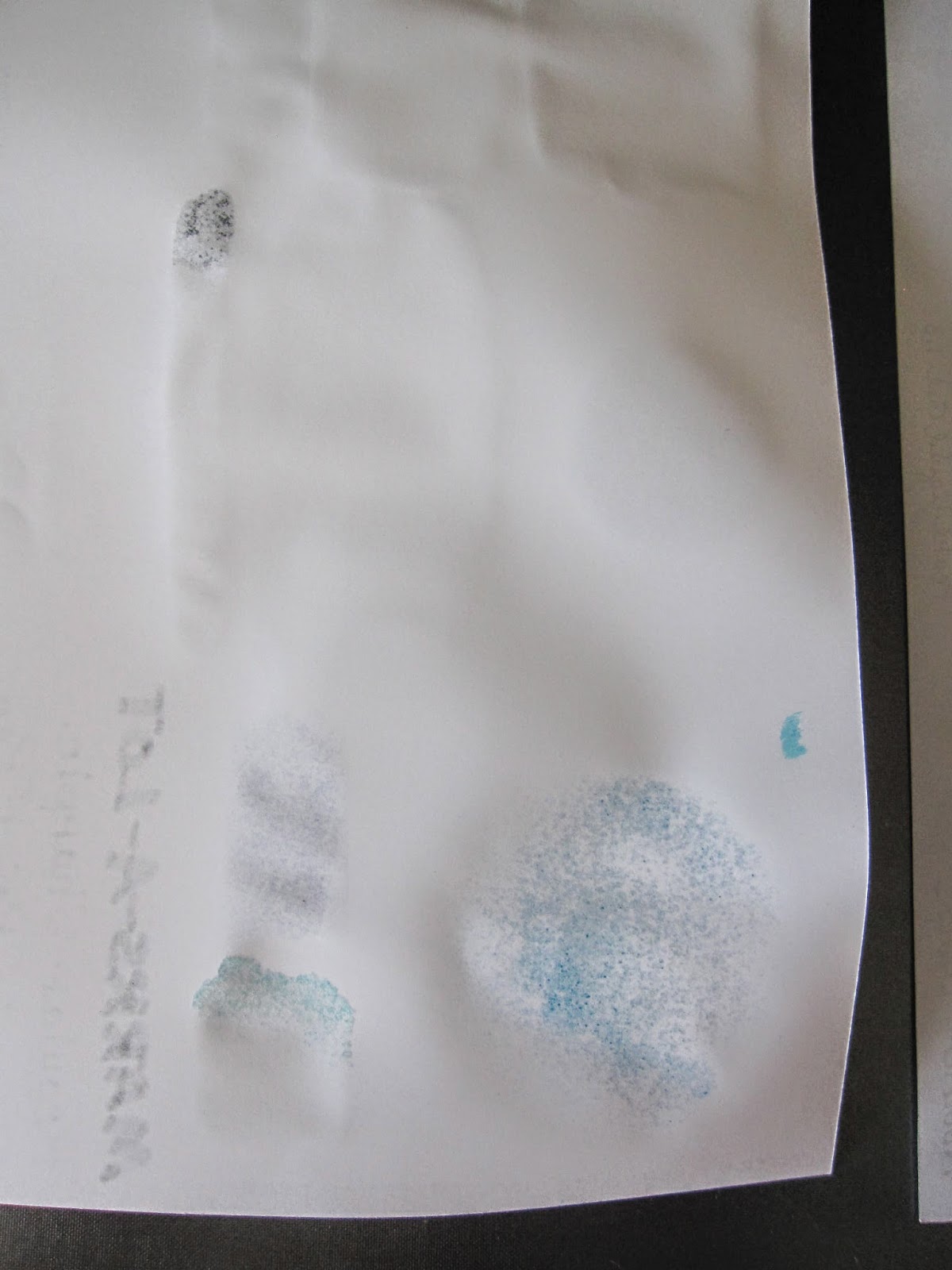 Well, the Canson Pro Layout Marker Tablet was kind of a disappointment.  It did work for most of the pens, but not for any of the permanent markers or that Uni Pin 1.0 drawing pen--and this is supposed to be made for markers?  Wet mediums buckle profusely, as you can see, even if they don't all bleed through.  The paper is quite thin so you get some shadowing--can read right through the backside.  I'm wondering if that will be an issue in a journal or not.  I'm guessing maybe not--but I'll find out.  ;)  This was the worst of the lot, as far as I'm concerned and the one tablet I wouldn't buy again...unless it surprises me and turns out to work well in a writing journal. 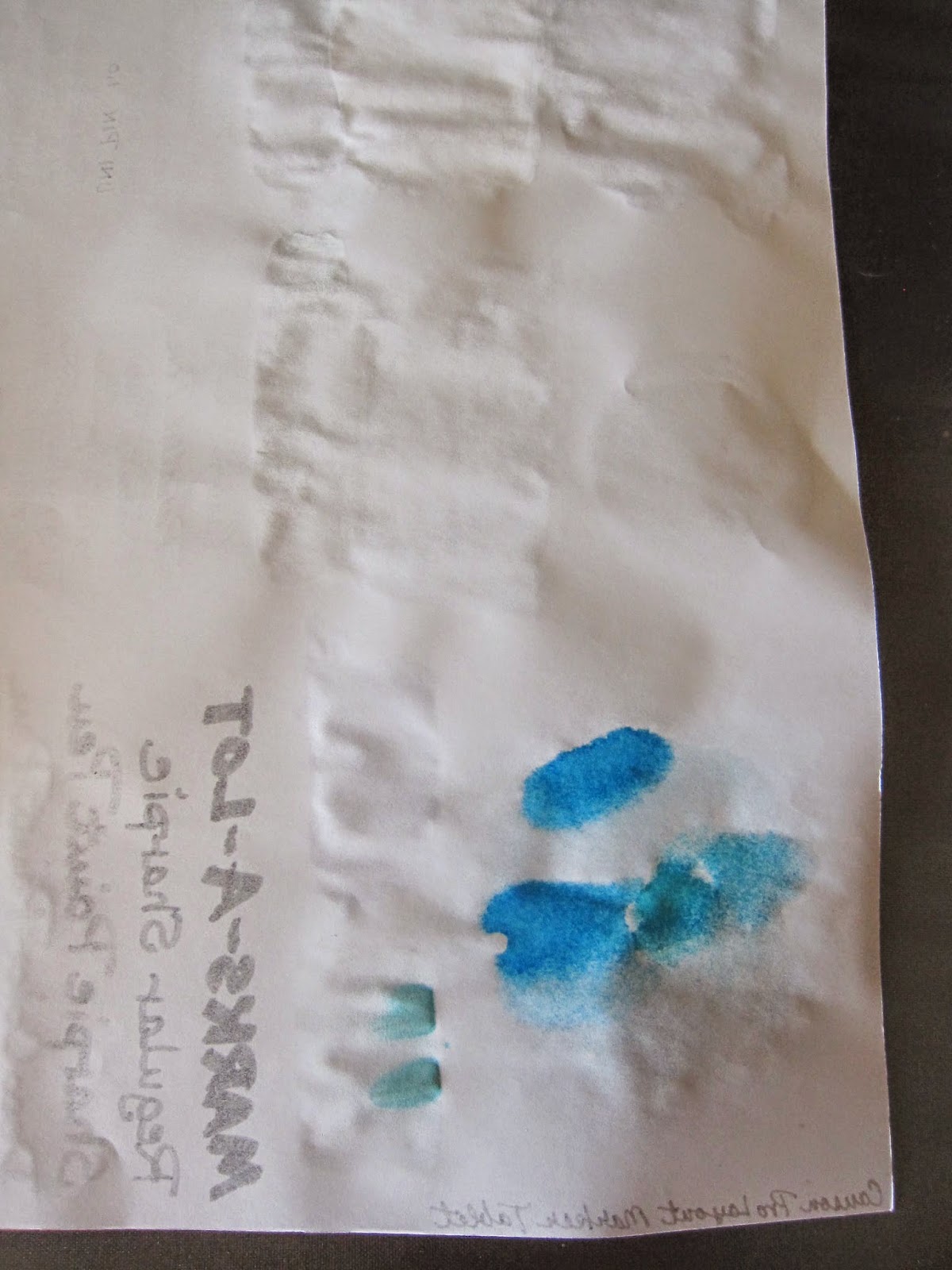 I am so glad I did all this testing before I used any of these papers in bookbinding journals so I know which paper will work for what type of journal.  Was kind of fun, too.
****
Karma stayed outside in her patch of sun for a while even though it was 17 degrees (-8 C) with a wind chill of 0 degrees (-18 C). 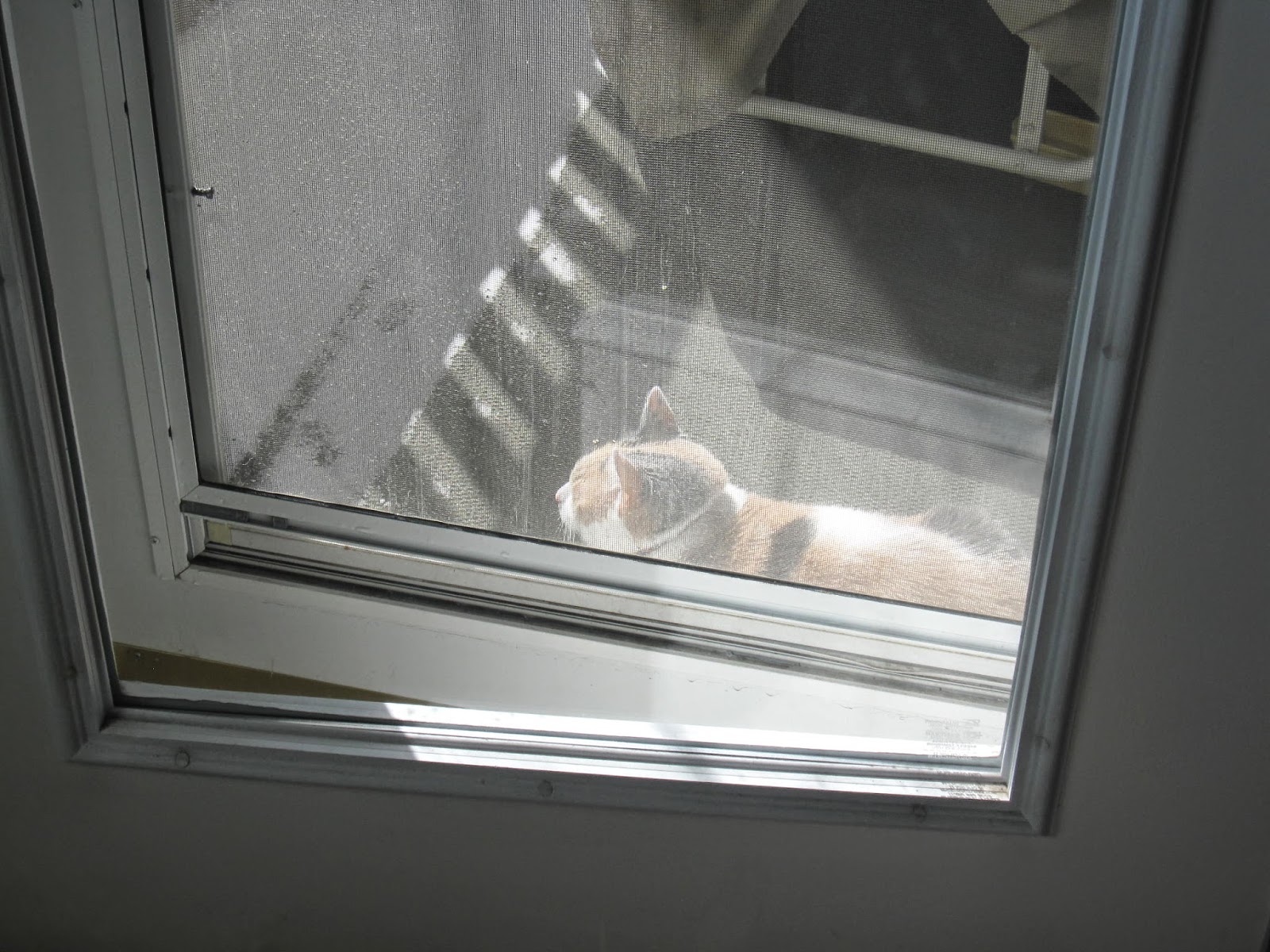 And she was happy the snow was just sticky enough for her to have footprints to eat off the carpet if she was quick after she raced inside. 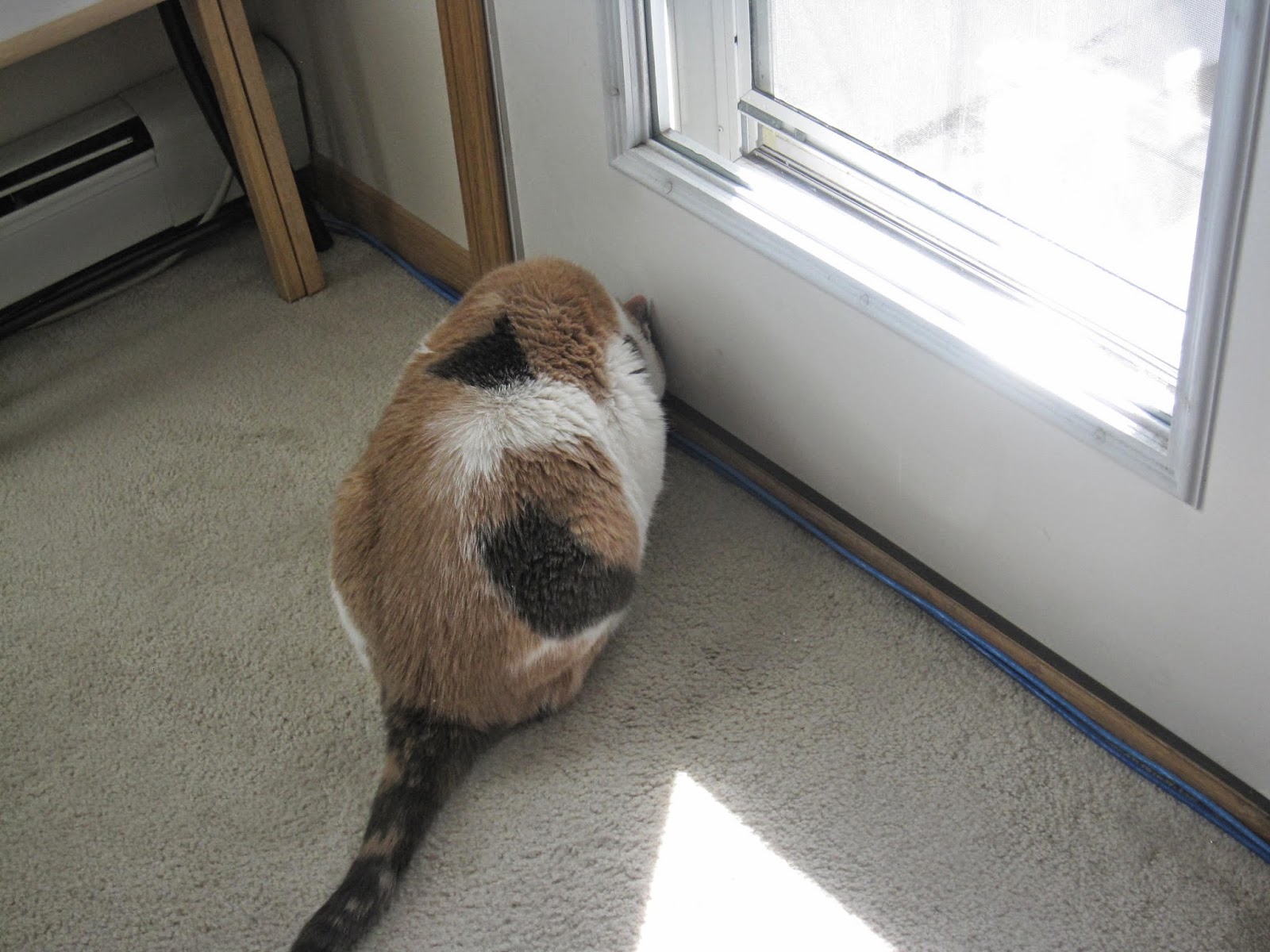 I am still dealing with the tail ends of this head cold.  Still pretty much feeling like a zombie, but at least I made it today.  :)  Will get around online when I am feeling up to snuff.  (Wonder where that saying came from--LOL!)  Caroline comes this afternoon, so I'd better get moving and pick up cat toys.  Thanks again for the wonderful birthday Friday!!  Have a great rest of the week!!  :) :)
****
"Do your best and then relax. Let things go on in a natural way, rather than force them."
Paramahansa Yogananda
Posted by Rita at 2:14 PM