Well, I am back with the living.  Or maybe the three-quarters living.  LOL! 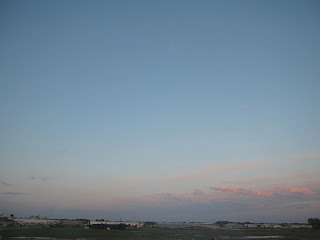 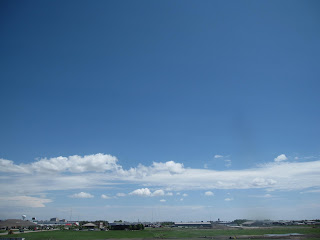 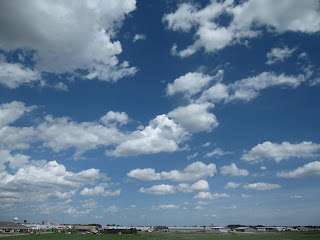 Still not getting decent sleep. 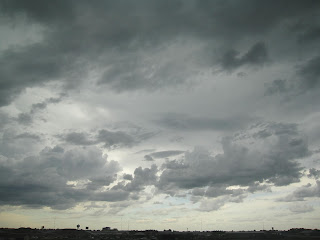 In two weeks I had only taken these few sky shots the second week. 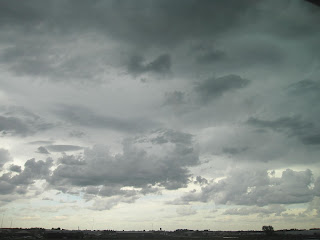 I started being able to actually function just this last Friday.  (Well, pushed it quite a bit--highly motivated because of the move.)
****
The purging has begun. 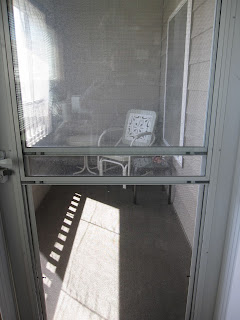 Got rid of the dirty old cheap chair covers and scrubbed down the porch chair and tables. 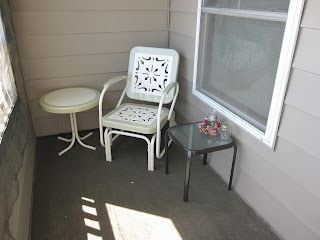 Then I set up one of my long folding tables and began going through my four bookcases with books...one shelf at a time...wiping down the shelves and sorting through each book. 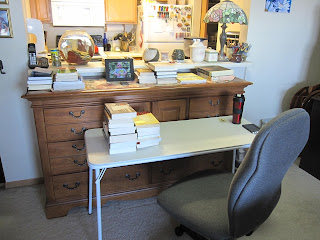 I forgot to get a before pic of my writing bookcase, but here is an almost done one.  Notice one of my trusty red coffee mugs in these pics for T Stands For Tuesday.  ;) 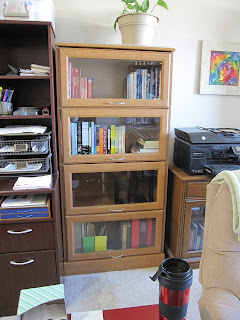 Here's the before pictures of the entryway cookbook bookcase... 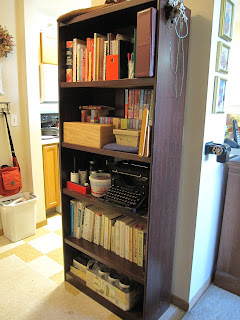 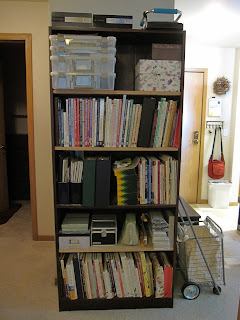 ...and the (assorted books) bedroom bookcase packed to the brim.  The bottom shelf was filled with literary journals I had subscribed to when I was in college as a creative writing major but never had time to read (and still can't part with till I do). 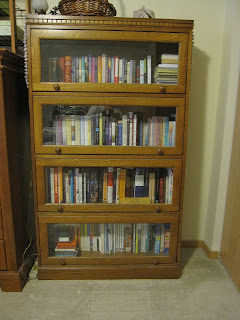 They got moved to the second to the bottom shelf of the writing bookcase where they belonged--tada!  The after pic! 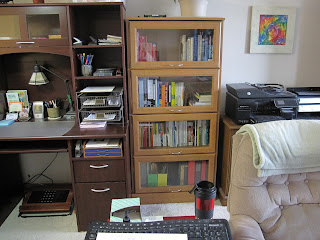 After pic of the cookbook bookcase (also has all the mystery books Caroline lends me)... 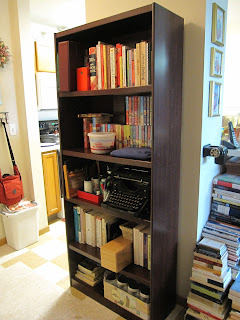 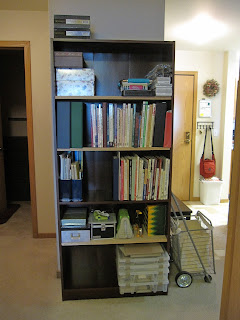 ...and the bedroom bookcase--tada!  Notice all the space I have freed up? 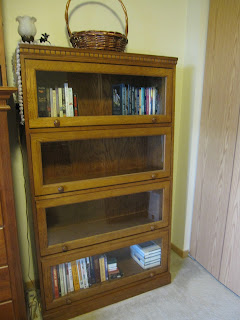 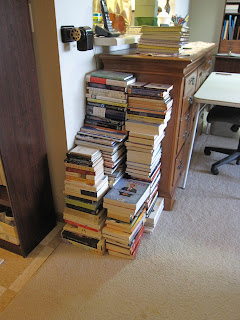 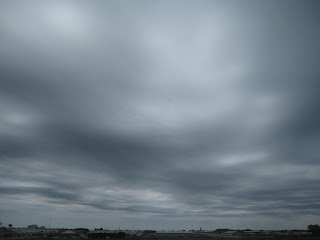 Karma knows something is up with all this moving things about.  There have been a couple barfing incidents...but she loves to occupy empty shelves--LOL! 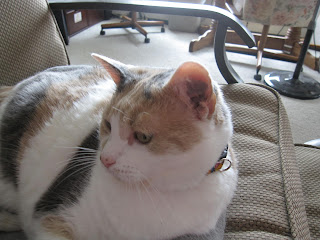 And what has been happening the last two weeks?  Well, we had an apartment inspection about a week ago from the company that owns the building.  They went to every single apartment.  Was some new guy who told me I had to move all my furniture that was along the baseboards away from the wall two feet.  Two feet!!  Is he insane?  I can barely open dresser drawers next to my single bed as it is.  I'd have to move my bookcases in two feet?  I'd be living in a tunnel!  He even wanted me to move my craft table in two feet from the window?  Well that table certainly isn't blocking the heat ducts.  It's all open under there.  ??  Not going to happen.  I told him that I rarely run the heat all winter because it gets so hot up here on third floor, so I wasn't worried about blocking the heat...and then he didn't mention it again.
****
Meanwhile, Sheree called and told me Wells Fargo Bank had refused to use the federal housing form granting my permission to let them have my banking information.  This is a form that has previously been used for decades, but now Wells Fargo wanted their own bank form used.  (Apparently they decided they do not trust the federal government--LOL!)  So, sick as a dog I had to go over to Sheree's office (over at another senior complex) to sign this new Wells Fargo form.
****
We said 2pm.
****
I was having such sudden, unending coughing fits that I was afraid to drive over myself.  I never knew when they were going to hit.  (Have you ever coughed so hard that you have tossed your cookies?)  So Leah agreed to give me a ride over.  I expected to pop in, sign, and leave.  Sheree knew how sick I was.  I sounded like gravel-throat-woman.
****
We get there and Sheree is not even there.  We had to wait outside.  They had some chairs in the shade, thank goodness, because this was one of the 80-some degree days.
We waited.
And waited.
And waited.
I would never make it back later that day and really didn't want to have to come back the next day.  Good grief--I had to give my 60 day notice on Friday.  Ian was patiently eating Cherrios.  Finally at 2:40pm we see Sheree strolling about outside checking out the lawn or shrubbery or something...taking her sweet time coming back to the building.  ???
****
Yup!  Sheree had completely forgotten about me.  And come to find out when we were sitting in her office going over the paperwork (which she had told me she was going to mail all the rest of it to the guy who does the approvals) that she ALSO had never even mailed the form to the office where I live currently, either.  This was Wednesday, right?  She said to go ahead and give my notice on Friday.  So I typed up an official letter and I did turn in my 60-day notice.
****
I planned to call her on Monday morning since I never heard back from her.  Sheree called me early and apologized for not getting back to me on Friday, said she hoped I had given my notice...yes.  (Now this might lead you to believe that Miss Sheree had been on the stick, using fax machines, and was about to tell me I had approval, right?)  Nope.
****
In fact, she said Wells Fargo rejected their form because it was the wrong one.  Sheree seemed confused by this because she had gotten the form off of their website, she said.  She'd have to call them or go to one of their banks or something...but she didn't have any time to deal with it until the end of the week because of it being the beginning of the month...but assured me it would get taken care of, no problem.  And--in passing--almost to herself--she mentioned that she still had to mail the form to the West Winds office, too.
****
*sigh*
****
I have to have faith that Sheree can take care of these things in the next two months...and I really don't expect any issues to prevent my eventual approval...but you can bet I do plan to call and prod her again next Monday.
****
Confession.
I have now been referring to her as "the dingbat".  Not nice, I know.  But...come on!!
****
The good news (blowing my mind, I tell you) is that Leah ran across an article about this lady who helps move seniors.

website
****
Expensive, but like another perfect-timing, dream-come-true for us!  I can't believe Dagan and Leah would do this for me!!  OMG!  This could be the best move I have ever had in my entire life (and I lost count at around 30).  Leah has asthma, Dagan has had hernia surgery, they have Ian now, and I am basically useless with the actual moving.  This could take the stress out of the move for me and for McFamily.
****
We'll know more after we set up a meeting with her.  Not sure when, but soon.  Things are popping over at Dagan and Leah's right now.  They've been building the raised garden beds and they are going to start building the deck this weekend (putting in the posts/cement today).  Leah's sister's hubby was a carpenter before he became a teacher and they are available to help build the deck now--so now it is.  And hopefully soon the sprinkler company will finally come and they can have their lawn, too.  Very busy over there!
****
I've been so sick I haven't seen them except for the long Sheree-wait and a video chat.  Caroline grocery shops for me tomorrow.  And I keep plugging away on the purging. 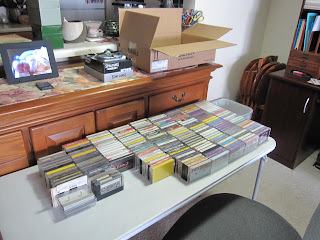 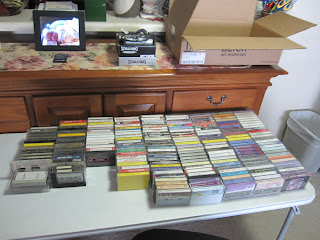 And that isn't even all of them.  I might try freecycle, but you can't really even give these away anymore--LOL!  Plus they are mostly new age instrumentals and nature sounds I used when I was an energy work volunteer (Healing Touch/Reiki/Soul Comfort) at a couple of churches in Minneapolis before I ever moved up here to Fargo-Moorhead.  Really is time to purge, eh?
****
But if all I have to do is purge and I don't have to worry about the packing...wouldn't that be wonderful?!  I will just keep purging and downsizing till I am done or it is time to move...whichever comes first.  :)
****
Update on my mom.
She is hoping to get out of rehab and back home soon.  They had mentioned possibly yesterday, but didn't happen.  She's obviously feeling better because she's chomping at the bit to get out of there.  My brother, Blaine, is flying down again tomorrow for a few days.  Lots of paperwork for mom to sign and a trip to SS on Friday is scheduled.  If she's not out by the time Blaine gets down there he'll probably be bringing her home while he's there.  I hope she is home soon.  [You don't want to piss off a Swede.  They may take a very long time to boil over, but watch out!  LOL!]
****
So, now you're basically all caught up on the last couple weeks.  I just purge a little, cough a little, rest a little, purge some more, cough some more, rest some more...repeat...repeat.  Am feeling a little better every day, but progress seems to be very slow with this bug.  I have made a long detailed purging list and have been making lists for moving (this is what I do while I'm resting): address changes, things I'll need for the new place, and such.  I am sure the time will pass by quickly, so I keep plugging away every day as much or as little as I am able.  I've even had dreams about already being in the new place!?  I've never had that happen before.  Nice!!
****
I'll fill you in about the moving lady when we get to meet her and find out more how this all works.  Thanks to all of you who emailed and asked how I was doing.  Much better than I was two weeks ago, that's for darn sure.  Still not well, but I will be back to my normal pretty soon, I expect--with the tail ends of this cough haunting me for weeks from what I hear.  That I can deal with...if I can just get some decent sleep--LOL!  And that is slowly getting better, too.  ;)
****
Life is good.
Bless you all!!
****
"Turn your face to the sun, and the shadows fall behind you."
Maori proverb
Posted by Rita at 9:18 AM