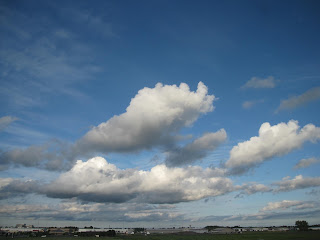 Been perfect weather up here--except we could probably use a break from the rain every other day.  Around 70-ish during the days--not too hot and not too cold--and a little chilly at night for sleeping.  Love it! 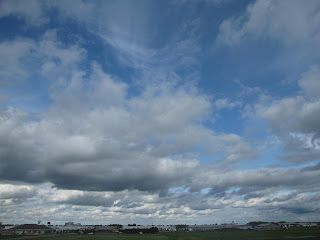 Caroline came Tuesday.  I told her she could skip most of the cleaning and asked if she'd help me with the purging.  I set up the other old folding table in the bedroom... 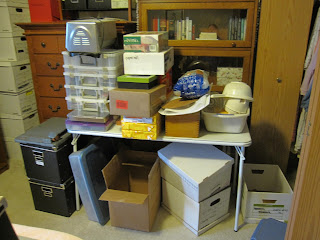 ...and she emptied out the craft bookcase for me and the wire cube shelves that were in the corner (where the stack of boxes is now).  She took the wire shelves apart for me, too. 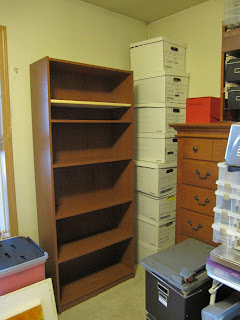 Those boxes stacked in the corner came from the hall closet above the washer and dryer.  Use to be double layer of the black wire cube shelves up there.  Caroline took those apart for me, too.  Notice all the green cleaning rags drying over the laundry basket--LOL! 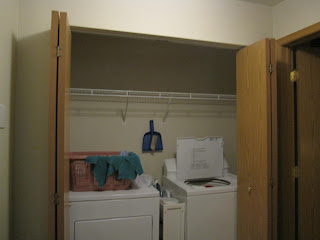 I had emptied out the shelves in the tall dresser already (plus some other stuff) on to my bed--and Caroline added some more. 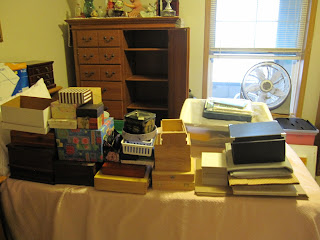 We also took down a little bit from the bedroom closet shelf, too.  This was such a HUGE help and saved me hours and hours--probably days (and we can't forget--extra pain, too).  Wow!!  That was awesome!
****
After Caroline left Karma had to come to see what we had been doing in the bedroom... 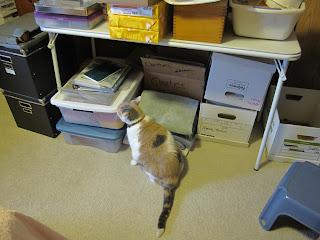 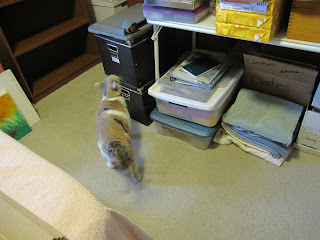 ...with disapproving ears back. 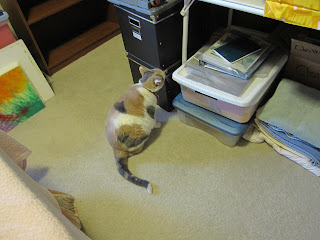 I collapsed on the porch chair for a while. 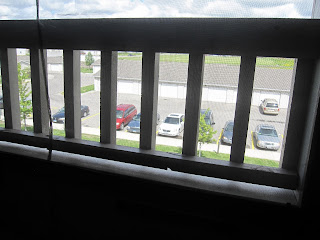 Won't be long and no more balcony made over into a porch for us. 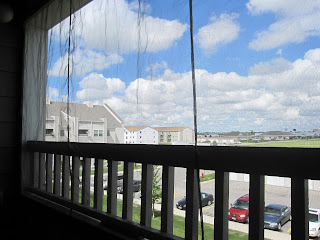 I had been working all morning till Caroline came that day and kind of reached my pain wall on Tuesday.  I had been going slowly and taking breaks and all--and did better than I thought I would--but I had been going every day for 13 straight days.  Honestly--was also just plain too tired to move--LOL!  Fibro can be a cruel mistress.  ;)
****
I collapsed in my chair--debating about taking one of my last two Percosets I have been hoarding like forever.  [Oh! The new pills I got don't seem to do much of anything so I haven't been taking them.  No point in taking something with little or no effect that I need to have regular blood work testing for, right?  Can't be good for me.]  But if I took a Percoset I knew I would be driven to keep cleaning and I'd end up feeling even worse than I already did when it wore off in 6 hours.  So, I was a good girl and listened to my snitty, ornery body.
****
Meanwhile...
I hadn't seen Karma for hours.  So I finally managed to get out of my chair and hobble about looking for her. 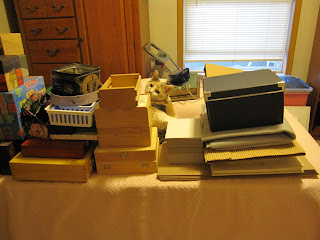 How she even found a spot to land up there is a mystery--LOL! 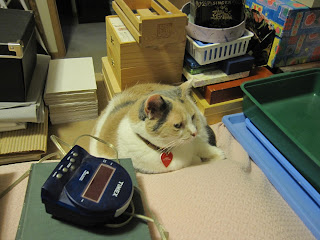 But Karma had a good long snooze in the middle of all that stuff piled on my bed. 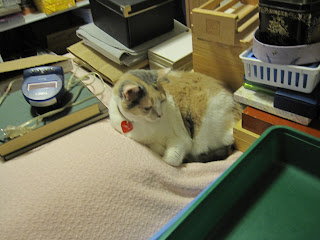 I did manage to move everything off the bed so I could sleep there that night.  I had cleared off the other folding table in the living room before Caroline got here.  Dumb me--she would have moved all that for me if I had thought to ask her.  (Been over-tired and higher pain level--so you do get a might foggy-brained.)
****
But I finally slept well these last two nights.  Or I should say longer.  I've been sleeping quite "well" on the new memory foam pad.  Usually sleeping 3-5 hour stretches without waking up despite all this purging activity!  Less pain today so I will probably get a little purging in this afternoon.  Nice!
****
Wednesday was connecting day, I guess.  I had a video chat with McFamily.  Leah even carried me out to see the new deck and I carried her around to show her the mess over here--LOL!
****
The biggest news was I found out that Ian went to put his hand against the sliding glass door to stand--and it was open--just the screen there--so he fell forward and smacked his head against the door frame really hard.  Three hours later he started vomiting--so they had to bring him to emergency.  Probably concussion.  Ian got medication for nausea and they had to stay there a couple of hours for observation.  Poor kiddo!  He still had a big greenish bruise I could see on the video chat.
****
I finally talked briefly with my mom, too, early that evening.  She was really too weak/tired to talk, but I did get to hear her voice and make her laugh.  She still has the infection, but it is apparently less than it was.  She has not regained any strength and is still sleeping a lot.  Very slow bits of progress.
****
McFamily signed a contract with Linda the moving lady.  The plan is that after I finish purging we will start packing.  Whatever we don't get done then Linda and her crew can finish packing.  They will move me and make sure I am okay that night for survival--LOL!  They'll put my bed together and make my bed--make sure I have everything for the bathroom, basics for kitchen, and can get to clothing.  The essentials.  But we will probably do the "resettling" (unpacking) ourselves...or I will, I should say.  Leah keeps saying that depending on the total after the move that they might be able to hire them to come and help me unpack some--but I am not worried about that.  These people will at least put the furniture where I want it so I only have to fill.  Once it is all over there the pressure is off, you know?  Can take my time unpacking.  :)
****
The Karma plan.
We hope to get the key a day or two before the move (July 28th) so we can take over some things--you know, the spillable, fragile stuff--and the fish bowl and Baby Phil (yes, he's still alive).  Plan to set up Karma's stuff in the storage area you saw in the video that's right inside the door to the right.  That's where her cat box and food dishes are going to go, anyways.  I'll bring over her cat beds, a chair & TV tray for me, the coffee pot, toilet paper, paper towels & trash bag (if Karma gets to barfing as she does when she's stressed)...things like that.  I have a list going.  Some of it will have to wait to be moved until early moving day--like her cat box.  Karma and I will go over to the empty new place and stay there while the movers pack the truck.  Karma will be confined to the storage room basically the whole day till they leave.  I'll have the chair and ottoman set up in the storage room, too, and will be in there with her most of the time.  We just won't put anything else in there when they move things in.  Leave the door shut.
****
Karma is known to howl.  Loudly and with great vigor.  But she can also be scared silent.  (I'm praying for silent.)  If she doesn't get to howling when she's alone in there, then I can come out when the movers arrive.  They're going to bring my recliner in with the first stuff off the truck.  Ahhh!
****
So, that's the moving plan.  The more we can do ourselves the less it will cost.  (Linda and crew charges by the hour.)  And that is why I am just purging and cleaning all my good hours I am able to every day...except for time needed for necessities like laundry and cooking--LOL!  But I also have to walk that fine fibro/arthritis line, too.  Kind of was hoping to have basically purged everything inside the apartment by the end of June so that when July arrives we can mostly just be packing.
****
McFamily plans to come over on Sunday the 28th to work on my garage.  I need to get the garage all sorted and donations made so that we can store moving boxes out there once they are packed.  Dagan and Leah have moving boxes they saved and Caroline and her hubby just moved into their brand new house so she has boxes for me, too.  Whoohoo!!  So we can pack up quite a lot of stuff ourselves.  :)
****
Things are crazy busy...but exciting!!
Well, not so much in a good way to Miss Karma.  But I swear she is adjusting somewhat to the chaos and my tearing her home apart.  At least there hasn't been as much barfing...knock on wood!  LOL!  She'll love it.  Once she gets over the shock.  She'll love it there.
****
Well, I am off to sort in the bedroom some more...
A pleasant weekend to ya!  :):)
****
"And suddenly you know: It's time to start something new and trust the magic of beginnings."
Meister Eckhart
Posted by Rita at 2:49 PM