Well, hi!
I was thinking I would blog all week to at least give you an update about my mom, but information was changing daily and I wasn't able to connect with her on the phone until yesterday afternoon. 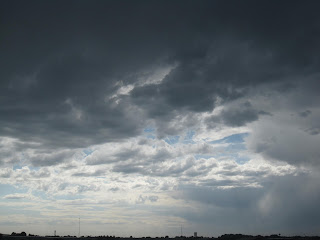 As you may recall, Blaine brought Mom in for lab work on Wednesday morning.  Well, they admitted her into the hospital.  She has a terrible urinary tract infection, was too weak to walk, and they expected her to be in the hospital for maybe a couple of weeks.  Blaine and Kathy could not switch their tickets and decided to fly back to Minnesota Wednesday since Mom was at least safe in the hospital for now and getting care.  You can only miss so much work, either.  Good grief!  Blaine is lucky he has been able to get as much time as he has already...and he'll be going back to Florida.
****
All I know so far is that they haven't found anything else, but the infection is so bad that it could explain her decline.  She's been on intravenous antibiotics (and they have been switching them so you know they are having trouble finding something that works better), but she still has the infection, is very weak, sleeping a lot, still can't walk or get out of bed or even reach the phone.  But at least she's getting treatment for the infection and they say there is some improvement.  It is so hard for my brother to deal with all of this from 1600 miles away.
****
If you have anyone you love in a hospital, nursing home, rehab center, or any similar facility and you can get over there...please, please visit them regularly.  Doesn't matter what age they are.  They need someone to be there for them...to watch out for them...to advocate for them, you know?  Our mother was basically confined to her bed..."housed"...for over a month at that rehab center...they never even washed her hair...she has bed sores...a raging infection...and it has eroded her natural positive nature and left her listless, weak as a kitten, sick as a dog, and on anti-depression medication.  It breaks my heart!  It breaks all of our hearts!
****
Ever since the accident she has never been healed enough to get home in Florida (which was what she wanted to do and we expected when she went to rehab) or to make the trip to Minnesota she needs now.  We just keep praying for her to heal enough to be able to make that trip back up here to where family can be there for her. 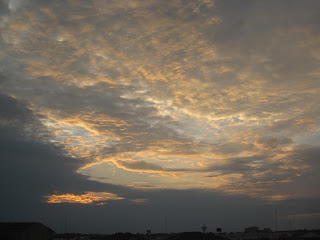 Any prayers and good thoughts are greatly appreciated.
****
Seems like things have just been off this last week.  Even a simple order of four plastic hanging file storage totes from OfficeMax/Office Depot went awry. 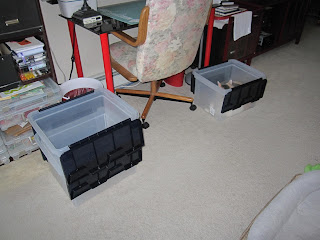 But Miss Karma had to check them out immediately, of course. 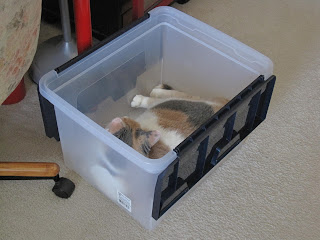 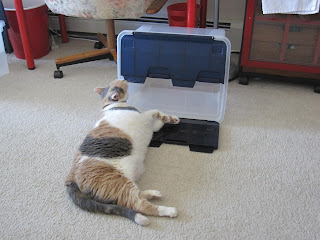 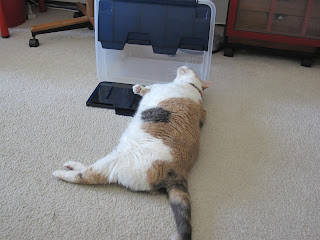 ...and rubbed.  Must be that new plastic smell.  Did anyone else love that smell of a new doll like I did?  I still remember rapturously sniffing my brand new Tiny Tears doll one Christmas at my grandparents in Denver.  I thought it was the best smell ever--LOL! 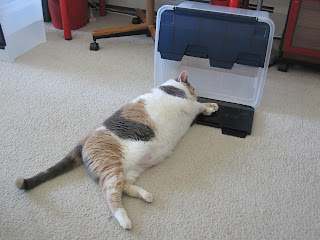 But...one of the totes was broken...cracked all along the one end (which is the built-in handle)... 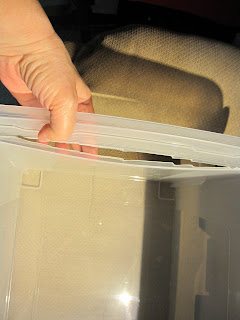 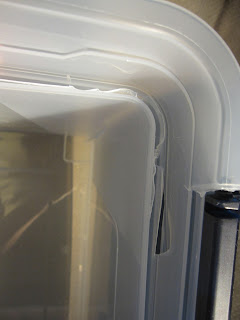 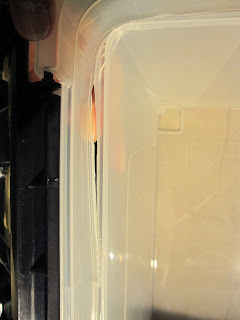 I have been dealing with this issue for three days.  It is still not resolved, even though I have already gotten the replacement tote.  Things just haven't been going smoothly recently.  (Is there really something to that Mercury retrograde business or whatever they are talking about--not sure I got that right, either.)
****
Office Max/Depot told me UPS would do an exchange when they came with the new tote, but they didn't.  UPS wouldn't take the package without a damage request from OfficeMax/Depot or a new package label.  I thought OM/D had already done that because they told me everything was taken care of.  I tried to call OM/D's 800 number five times over two days and it would go beep-beep-beep and disconnect me.  I've tried emailing them--no response.
****
So I figured I try it from the UPS side and have talked with them a couple of times...to no avail.  At one point on the second call to UPS (and the third person I had told the whole story to) the lady said they wouldn't pick it up from my place because they didn't deal with packages of so little worth (the tote is only $15.99), but they would come and pick it up if I paid the $10.95 pick up fee.  Ah, no.  They keep telling me I need to have OM/D do the proper paperwork or send me a shipping label.  I'm still waiting for an answer to my last email to OM/D.  I will try and call again...but maybe Monday.  I am telephone fried.
****
My last resort will be to bring this damaged tote over to the Office Max in Fargo and drop it on their service counter.
****
Do you remember how they left my new desk down in the entryway?  Ever since they have combined companies--service has been awful.  I guess I am done with ordering anything from them online.  Done.  I am not waiting for three times you're out.  Twice in a row is enough for me.  (And they were the ones who sent the lone marker in the humungous box, too--LOL!)
****
But...Karma's new heart tag from Doctors Foster & Smith came quickly and was perfect. 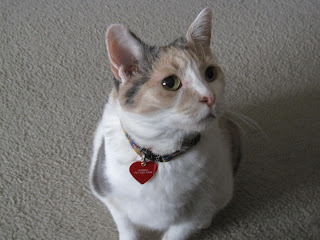 I wanted her name and my number on Karma's person in case she ever does get out the sliding glass door after we move.  :)
****
Speaking of the move.  Sheree did send me the new form for my bank and says she already took care of the paperwork for my landlord.  I mailed the bank form back immediately.  But she neglected to tell me that I need paperwork to show Karma's vaccinations are current.  So, Miss Karma will have to go in for shots before we move.  (You may recall that Karma has been known to go feral at the vets, so they won't be too happy to see her, either--LOL!)  And I also need to provide a picture of Karma for their files.  Now THAT is one thing that I do not think is going to be a problem.  ROFL!
****
Oh, and we did get the "ROUGH" estimate (Linda did the capital letters) for moving me...I almost fell over!!  (I have way too much stuff, I guess--which is why I am purging.)  Okay--don't fall over but her ROUGH estimate was $5,400-6,300.00!  And if they don't unpack or "resettle" we'd save around $1,575-1,800.00 as a ROUGH estimate.  Whew!
****
Now, Dagan and Leah haven't had any time to sit and discuss this yet because they are busy building their deck and some raised garden boxes and have been very busy...but Leah told me that she had expected it to be around $5,000.  Which it probably would be if we unpack everything ourselves.  Or we could pack everything and hire a regular moving company to move me.  They haven't decided which way to go yet--Linda or a regular moving company.  And I haven't seen McFamily because I have been so busy, too.  We haven't even done a video chat!  So you know how crazy things have been.
****
I keep on cleaning and purging during all the good time I have each day.  I have a long detailed purging list and I keep checking things off little by little.  I have finished the bathroom, completed the linen closet, scrubbed down the wall shelves over the art table, filled two of the four file totes...have emptied whole drawers and a banker box...and made a couple trips to the dumpster.
****
I have also found a lady on freecycle who is old school enough to want all my cassettes--both the new blank ones and the box of my new-agey instrumentals and nature tapes.  Plus she said she'd take my card decks (angel cards, soul cards, positive affirmation cards) which I hadn't even posted on freecycle yet.  So, I hope she shows up.  She lives an hour out of Fargo, said she is having surgery on Wednesday, will find out the exact time of her surgery on Tuesday and will call me to arrange a pick-up time after she talks to them.  I am certainly not the only one who's life is complicated lately.
****
And it's like fate is against me talking to Mom since her decline.  ??  Her cell phone was not even ringing or letting you make a voice mail (which neither Mom or I know how to listen to, anyways--lol!).  I thought maybe it needed to be charged, but the next day it was the same thing.  Had to get ahold of Renee to get the number to the hospital and Mom's room number.  Then--her roommate's people told me was sleeping when I called.  Blaine told me last night that he asked a nurse to check to see Mom's cell phone was on and the nurse turned it on yesterday.
****
So I try the cell phone today.  No answer.  I'm not even sure she can reach the cell phone any more than the hospital phone.  I hate to keep calling, either, when she can't get to the phone or might be sleeping.  She is sleeping a lot.  I called the hospital later and her room phone was busy (but you don't know if it is Mom or her roommate on the phone).  Called through the hospital again later and it disconnected after two rings.  Been so weird.
****
Mom was complaining about her ankle last night and I wanted to know if a doctor had looked at it.  So I tried to talk to the nurse's station...but I am not listed as a contact so they wouldn't tell me anything but that she was stable.  So I have to get ahold of Blaine or Renee and get me on the contact list.  (I had been getting my spotty information from them.)  Everything has been just off kilter, you know?
****
So, enough babbling.  I've tried to call Mom three times today and will make another attempt later...but, in the meantime, I am off to work some more in the bedroom.  I have dressers and bookcases to clean and purge.  Hope you are having a really good weekend.  And I hope things tip back to being on kilter soon--LOL!
See you Tuesday.  :):)
****
"The main thing in one's own private world is to try to laugh as much as you cry."
Maya Angelou
Posted by Rita at 4:00 PM