We did have some sun. The warmer weather and melting away of the snow brought the roofers back, as I mentioned. The ground is so soft and muddy that they lay down a path of sheets of plywood for their big orange machine to drive across the grass. 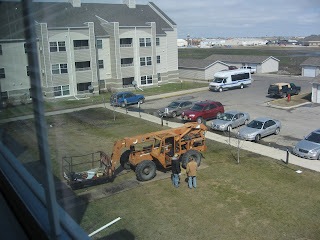 And I was back to keeping my blinds drawn because they were up and down right next to my porch... 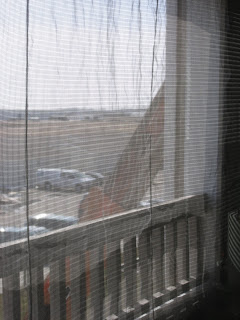 ...and later right near my living room windows. For some crazy reason Karma actually wanted to spy on them. She cried till I pulled the blinds up a bit for her. (If I don't meet her feline window demands the naughty girl bites holes in the plastic blinds.) Her spying didn't last more than a couple minutes. Always likes to believe she is braver than she is--LOL! 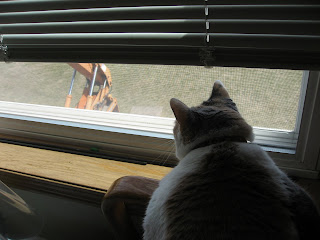 They were here for a few days--clomping, drilling, pounding... 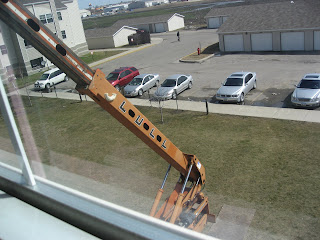 ...and tossing down pieces of siding.
I just don't want any more leaks.
Please. 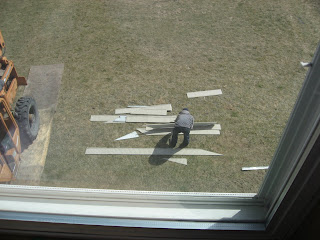 I took an old journal that had the first few pages torn out (can't remember why now) and decided to make it my calligraphy practice book. 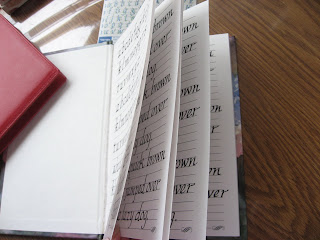 I learned this Italic style in my class all those many years ago. I am so out of practice. 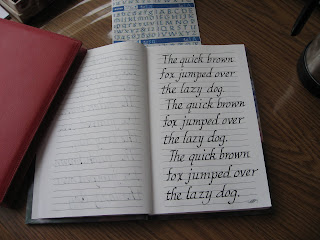 I mixed these up. Sorry. This was my first attempt at the alphabet. 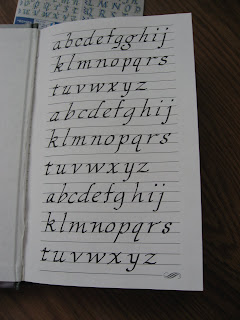 But after I practiced for several pages AND made a sorry attempt with the Gothic alphabet, I realized that the memory of all those many hours of practicing the Italic was coming back to me. I could really tell the difference trying a new alphabet. I was horrible. (Forgot to take a picture.) Anyways, I plan to continue to practice the Italic calligraphy and get back in the swing of things.
****
Well...I think I forgot to tell you that for my birthday I got an extra big Target gift card this year from my brother and his wife. Leah and Dagan said they'd "buy" it from me, so that I could finally get a new all-in-one printer. Dagan researched printers for me online.
****
My 11 year old HP G55 that I bought "as is" (floor model and the scanner never worked)...well, she has been getting touchier and touchier. Her circuits are a bit frayed. Recently it has taken me up to an hour a couple different times (instead of the occasional 15-20 minutes of pleading that has been going on this past year) just to get her to remember how to print from the laptop. (She never did like the switch from the desk computer to the laptop...maybe doesn't care for Macs...or her cord being disconnected and moved about?) 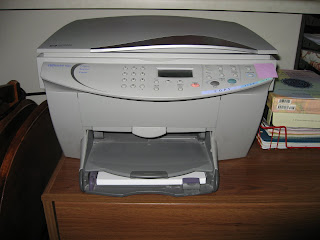 The most recent addition has been that she doesn't want to shut off if she is on or turn on if she is off. Takes a lot of persuading. Got to the point where I put that purple post-it note over her on/off button a couple months ago to remind me not to bother her and I just left her on all the time.
****
But then she had problems remembering how to come out of sleep mode. And yet, when I open the blinds and the morning sun hits her from across the room she revs up and thinks I am going to make copies--poor thing! It's the only thing she hasn't forgotten how to do--yet--make copies. (The sun hits between the cracks of her uneven cover and she gets all excited to show me she remembers copies.) The poor old thing has Altzheimers. On her last wobbly circuits. :)
****
Then Thursday morning this big box arrived by FedEx. 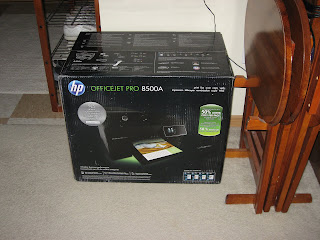 I was hoping she wouldn't notice... 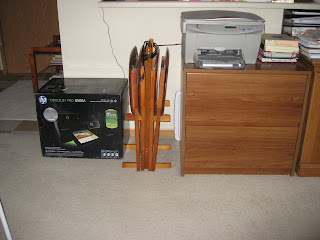 ...but she did. *sigh*
****
I decided that I might as well use up some of the ink cartridges before Dagan and Leah come over to move her away and hook up the new guy in town, right? All black and slick and wireless, he is--sitting there--waiting--quietly. I bet his scanner even works.
****
She was totally defeated. Wouldn't work. No way. No how.
****
I tried every trick I knew for an hour and forty-two minutes. Nothing. She'd tease me and say she was processing the job for 5-10 minutes at a time and then disconnect or tell me a fatal error had been made. I asked her to try different tasks. Used different brain routes. Shut things down and started them up. Plugged and unplugged. But I think her little metal heart was broken.
****
I turned her off and asked the techie angels to work on her during the night.
****
Now, I know that sounds bizarre, but it works half the time.
****
And it did. This morning she was raring to go. I have been printing all day! Weekly schedules, recipes, photos, etc. We have had a grand time. I figured I had best print while I could. Tomorrow is another day...and she may not remember a thing she did today. But...today...she did herself proud! Very slowly...but she ran a magnificent printer marathon today! It was almost like the old days. :):)
****
And she did say one of her cartridges is almost out of ink, but she wouldn't tell me which one--ROFL! I will miss her. All those college papers...the endless times I would print off some partial story or poem or assignment I was writing because I still need paper and pen in hand to really work on drafts...
****
G55 will be missed.
****
Maybe the weather confused her and she thought it was January again--when she was still in better working order at least part of the time? This morning the windows were iced... 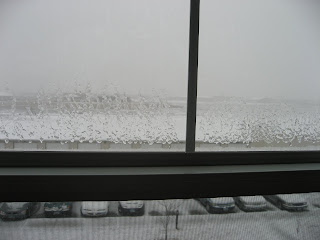 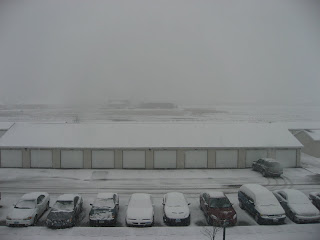 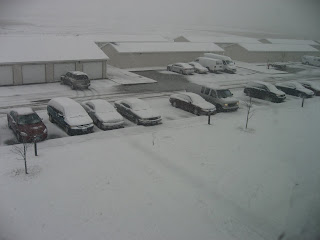 So much for the green grass--ROFL! The world has a soft white blanket again. What is it about Fargo's simultaneous flooding and snowstorms? ;)
****
Seriously tho--it won't last long. Spring snowstorms melt away fairly quickly. Even the pounding they are taking west of us--won't stay on the ground long. :)
****
Anyways...been a long day...have a nice weekend!! :) :)
****
"Vision is the art of seeing things invisible."
Jonathan Swift
Posted by Rita at 8:31 PM