Just a quick hello! :)
****
I haven't put "Karma's" TV tray table out on the porch for ages, so she spent lots of time spying on the swallows (I think they have a nest in the balcony below us)... 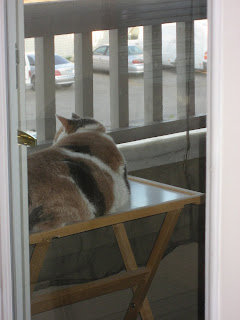 ...and the people passing by in the parking lot. 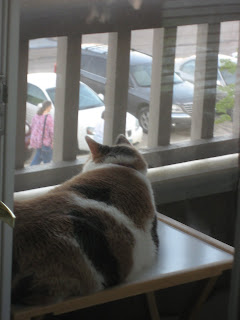 This is for you, Iggy!!
A close-up of the orange sentries... 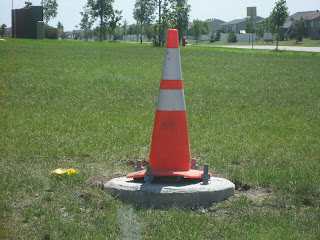 ...guarding the newly opened connecting street. Or maybe where they are planning to put in a sidewalk or build more buildings or whatever they are doing that far back along the road-LOL! But--don't see any blockades and there was no parked equipment and/or trucks anymore. Clear as can be. No more dead end. :) 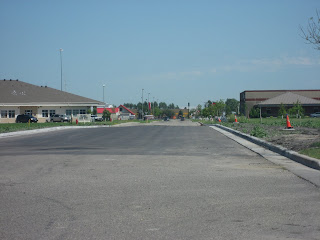 My eye mapping went well. Boy! The inside of your eye looks really weird! They can tell or have a good idea if you have high blood pressure, high cholesterol, plaque floating about, diabetes, tears starting, floaters, the beginning of macular degeneration, cancer, etc. I have lots of floaters and have had for almost as long as I can remember. I just ignore them--look past them--and forget I have them most of the time. There's one that shows up every once in a while that looks like a string--and he showed it to me! It is a big long thin stringy looking floater--funny! I guess if I started to get a whole bunch more that wouldn't be good, tho.
****
Anyways, I have a slight darkening/cloudiness in the area where macular degeneration shows up--in both eyes. Nothing yet, but he said I needed to take lutein, for sure, and more Omega-3s. Help prevent it from turning into anything, I guess.
****
I have a small "freckle" on the back of one eye. They are usually harmless, but occasionally can turn into cancer. Kind of like moles on the skin, you know? But it was really small and probably nothing. What's nice is that, now that I have the baseline pictures taken, when I have them done again in a year or so there is something to compare to.
****
Everything looked basically healthy. All he stressed was taking multiple vitamins, lutein, and Omega-3s. All are good for eye health, I guess. So, I've been emailing Leah (who is also my Shaklee representative) about which pills to buy. I only recently went back on the multi-vitamins a couple months ago. Just felt like I should be taking vitamins now that I have gone vegetarian for over a year, you know? So, I'll add the lutein and Omega-3s, too. :):)
****
I watched one of my Netflix movies. Was a German movie (subtitles-1987) called Wings of Desire--very slow moving and the plot was not all that clear or easily followed--for me, anyways. Just didn't know where they were going with it, you know? Well, I kind of did from the description, but they never made it really clear enough for me as I watched it--even tho it was atmospheric and strangely compelling. One of the big problems I had was that there were things that kept reminding of of City of Angels--which I loved and have watched several times. (I seldom watch movies more than once unless I really loved them.)
****
Anyways, this old German movie had the angels watching over the humans--but they didn't seem to really do anything but observe. A couple of times it looked like they could lift the spirits of someone who was depressed, I guess--but one guy still jumped off a building? The angels basically just wandered about and watched. They did hang around in a huge library, could hear what people were thinking, sometimes were on top of tall buildings or statues, they wore long dark coats, and occasionally heard choir-like singing. The main angel wondered what it would be like to be human, talked things over with his sidekick angel buddy, and he did really like this circus performer girl (who wore angel wings in her trapeze act)...but I never felt like he had "fallen in love" with her and she was the main reason he wanted to become human. There were a lot of lovely poetic sections about being alive on earth and the little things we take for granted and don't notice.
****
Oh--and Peter Falk played himself--an actor visiting the country to work on a movie--BUT--he could sense the angels when they were nearby and eventually you find out that it was because he had been an angel and had chosen to become human 20 years ago! (Does all that sound familiar?!) The angel became human (in an undramatic way) and finds the girl, but they kind of left it all hanging as to what would happen with them since they had just met and all. I prefer to believe that she totally falls in love with him and they live happily ever after, of course, in this version.
****
Anyways, I think I was totally distracted by comparing this movie to City of Angels while I was watching. Whoever wrote City of Angels absolutely must have seen this movie, ripped off the entire premise, added to it, changed things, and--honestly--made it a much better story and film. Watching Wings of Desire just made me want to watch City of Angels again! LOL! ;) Makes me wonder if somewhere is says..."based on..." or "adapted from..."??
****
Well, I was shot after being out and about. Took it easy. R&R day. In bed early. And after my usual couple hours of "thawing out" this morning, I think I am feeling a little better today than yesterday. ;)
****
Going to be another quiet day for me and Miss Karma. Probably a quiet weekend. 70 degrees right now, but 88% humidity. Supposed to have possible rain or thunderstorms today, Sat, Mon, and Tues. Nothing new--LOL!
****
Have a smiley weekend! :)
****
"Find the love you seek, by first finding the love within yourself. Learn to rest in that place within you that is your true home."
Ravi Shankar
****
Sounds like that "safe place" I believe everyone has inside. :):)
****
I guess this wasn't so quick after all--LOL!
Posted by Rita at 8:58 AM